Thanks for the requests last week, keep them coming. Vaguely animal-themed review this week.

In all seriousness, though, read to the end, because there will be a full episode review of an infamous moment in Detroit Big Time Wrestling.

Back this week without a specific theme, which will come and go as the need or inspiration arises, but meeting a few requests for a fiery match involving Mike Samples and an even hotter one involving Ta-Gar, Lord of the Volcano!

Just realised I could’ve had a theme there – fuck!

This week’s reviews are inspired by Scott’s review of an awful Raw episode with a heel who looks like they paint his face on doing a posing segment and Vince McMahon’s fascination with bodybuilders who look like they’re ready for a night out on the town!

A quick editorial on that Raw segment, as I’m not a regular watcher but read Scott’s review out of curiosity and watched that segment. The obvious post-1984 reference for pose downs is Rude/Warrior, which was generally not a good segment, but had the bit at the end where Heenan sprayed Warrior in the eyes with the baby oil and Rude wore him out with a flexing bar to set up a damn good feud that was nothing but money. This has a guy, (Austin) Theory (why not just call him Hypothesis at this point?), who I’m guessing is pushed because he’s “a good promo” but actually is on par with Billy Gunn as a heel in 1996 with the “SHUT UP!” stuff, looks weird, posy, and after this “savage attack” on Bobby Lashley, who I guess changes disposition based on which way the wind blows, ends it with a… dropkick? I won’t get this right, but Scott was pretty on point with the “flaming garbage pail full of manure” review.

Enough about current sucky wrestling, let’s get back to some great awful wrestling from the classic era! These muscle men definitely wouldn’t have talked about the hush money! Inspired by Scott’s recent review of the awful Best of the WWF: Around the World tape, I thought I’d review some more terrible matches of an international flavour, featuring the likes of Raja Lion, the Great Antonio, the aging Sheik, Big Daddy and more!

Back with some more nightmare matches, kicking it off with one of the most unique cries of pain ever heard in a wrestling ring, although we’ve all been there, right fellas?

Courtesy of Liam Savage, the full Q&A from 1995 that gave us the clip of Paul Heyman predicting the success of Nitro, which he was somewhat on the money with but not for the exact reasons. I’m skipping seventy minutes in because I’m not really as interested in listening to the wrestlers who talk about how if you could cut them in half like a stick of rock it would read ECW right through, then were gone as soon as a WWF or WCW contract worth something was slid under their noses (and rightfully so, honestly). It’s when Paul E comes in and holds court that we REALLY want to hear. Goes without saying that he’s flanked as always by Dreamer and Taz. Sound quality is about as good as you’d expect for camcorder footage from 27 years ago.

Inspired by Jabroniville’s “dream” matches that must come out of the dreams of Dr. Caligari and Cesare (not the one who did the giant swing), I’m going to look at some matches that are more infamous than famous.

First up, the Chamber of Horrors from Halloween Havoc 1991, followed up by the Bushwhackers against the Beverly Brothers from Royal Rumble 1992, then the Undertaker versus Giant Gonzales from WrestleMania IX, and finally the Clowns ‘r’ Us facing the Royal Family from Survivor Series 1994. “Special” bonus match of Tully Blanchard taking on Shane Douglas for the ECW heavyweight championship.

Let’s get ready to fumble! 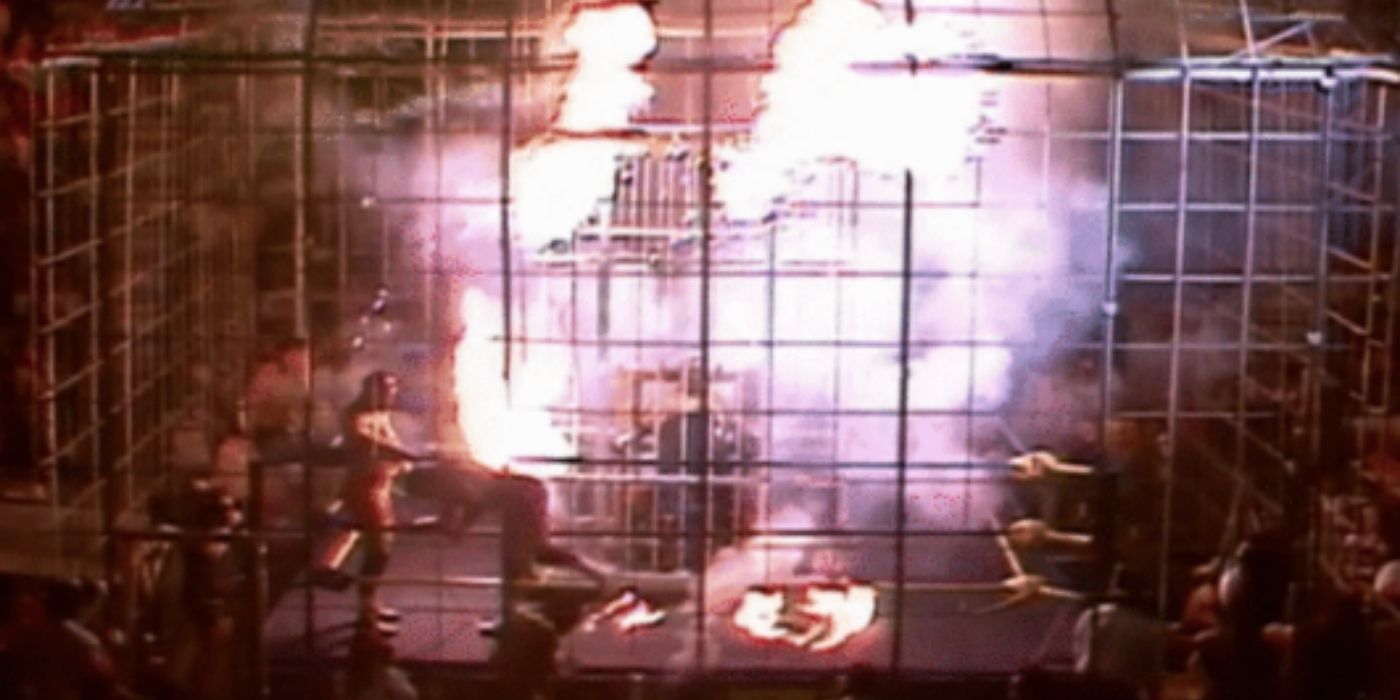 Apparently a holiday special this week, which to me were always only special in name only.

One every day across the weekend to end 1986 as it feels like these are dying on the vine, never topping the three title changes episode.

A curious Saturday evening addition, I was down the YouTube rabbit hole and came across a channel with some episodes of this show on. Vince McMahon’s third or so attempt to branch out that resulted in failure after Sugar Ray Leonard vs. Donny Lalonde and No Holds Barred, he started up his own bodybuilding company too and put some WWF touches on it. As I got into wrestling in 1991 with the episode of Prime Time that was effectively a commercial for the WBF, with Bobby Heenan challenging a bodybuilder to a pose down and feigning an injury when he took his sweatshirt off to get out of it, I didn’t ever really know a WWF without the WBF, so watched these episodes and the second PPV that really now is just the source of the Vince and Gary Strydom meme (“Talk about a night out on the town!”) without any complaint. A sign that you’re into something you’ll watch anything.

If the screen grab for the video doesn’t get you reading the review, I don’t know what will!

I can go for regularly reviewing UWF for a few weeks, especially as I’ve never watched this episode, directly after the three title changes episode. Let’s hook ’em up!

As Rick Martel and Tom Zenk as the Can-Am Connection came up for discussion this week, I thought I’d take a look at the shoot interview conducted with Martel a few years ago and see what the future Model had to say. It’s a long interview, so it’ll be a watch, listen and type approach for me.

After reviewing an episode of Championship Wrestling from Florida previously, soon to be bought up by the NWA, I thought I’d look at the biggest episode from the promotion that Jim Crockett would also absorb later on.

I looked at the retrospective show Mike Graham and Randy Savage were presenting circa 2001 a few weeks ago, so I thought I’d have a look at a full episode. This is from the beginning of 1986, almost a year removed from the death of Eddie Graham, and I believe the story is that anyone who had a share in the company, be it a penny or a pound, wanted in and to take control, leading to the company going into a decline and having to be sold at the beginning of 1987. Let’s see what we have here.

Seeing as Mike is reviewing the episode of Raw that ended the winning streak that WCW had maintained for 83 weeks (“Chat me up on that…” “I can’t recall the details…”), I thought I’d look at the episode of Nitro that finally took the loss. Was it Kevin Nash beating Goldberg or was it Ludvig Borga beating Tatanka? Let’s find out! This was an interesting old find for me recently, something I have on tape somewhere but is much better now it’s digitally curated on the internet. The contradiction that is Jim Cornette was strict on kayfabe not only in his own promotion in the nineties but also in the new millennium as one of the heads of OVW, to the point of not letting heels and faces drive together. However, his origins were as one of the most inside of inside fans and this bleeds over into the fan weeks and cookouts he allowed access to at the same time as his big events.

This camcorder footage was recorded the day after the Superbowl of Wrestling, which was the last big event for the promotion before they stopped running at the end of the year. Lots of wrestling fans who look more like Jim and less like the wrestlers, hence why the wrestlers that get shown stand out more.

A bit of an old school review for me on this Easter weekend, as I was thinking about how as the eighties rolled into the nineties and my interests expanded to include Teenage Mutant Ninja (Hero over here) Turtles and wrestling, which both combined together at different times in the comics, cartoons and toylines of TMNT. So, this is a look at some of those occasions across the various iterations we’ve had over the last 35 years. I’ve been asked in my previous review comments section to look at stuff like WXO (too milquetoast) and WSX (too late for me), but YouTuber Liam Savage has been uploading episodes of Texas All Star Wrestling, the successor of Joe and Tully Blanchard’s Southwest Championship Wrestling with a seasoning of World Class Championship Wrestling, so it’s going to be that today with an old school (for me!) bonus tomorrow.

What is good about these episodes is that Liam makes sure to include the names of some of the more familiar national and international stars in the titles so you know who to look out for.