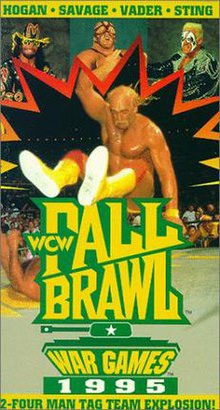 The guy in the top middle was an early casualty, thanks to the one-armed man.

Freshly-returned Luger (and what a return!) replaces Vader, who was fired after his backstage fight with Paul Orndorff. I believe the premise was that Vader was willing to do Hulk the favour and team with him against his enemies in return for getting a future title shot against him. The babyfaces are all in camouflage, although most of them have their normal boots on to look pretty jarring. Hogan claims his team has drunk Agent Orange before the match, which probably explains his colour. He also drops “DTA!” into the conversation years before Stone Cold.

So, it’s War Games, meaning two men start for the first five minutes in the double cage, anything goes. A coin toss then follows, always traditionally won by the heels to allow them the advantage for two minutes, with alternating entrances until every member of each team is in. It’s then Submit or Surrender, with the match only ending when one man quits. If Hulk’s team wins, he gets five minutes with Kevin Sullivan to himself, which never struck me as that big a deal because the Taskmaster was a pretty sturdy wrestler and only occasionally managed, really.

Lot of time burnt up on the entrances. I’m actually surprised that the Hulkster didn’t insist on making his own entrance to his American Made music rather than coming out to the War Games theme. Sting starts with Shark. Shark was a rubbish gimmick, but the worst thing about it was the cheap gear that he had to wear, constantly pulling his tights up. He bites the arm to start but misses a charge. He steps out into the opposite ring to avoid a Stinger Splash, so Sting flies over the two ropes with a clothesline then slams him. Second attempt fails, leading to an awkward spot that would’ve been a pinfall attempt. Bearhug slows it down. Sting breaks it with a bite that looks like a kiss. Shark goes for his own running jump clothesline, but is too big and gets caught over the two sets of ropes in a funny callback. Sting tries the Scorpion Deathlock as the five minutes run out and the Dungeon of Doom wins the coin toss.

Zodiac stumbles in and immediately gets caught in a Scorpion Deathlock himself. I think Brutus based the gimmick on a character he played in a dream sequence of Mr. Nanny of all places. Sting really badly runs the ropes and gets hit with a double clothesline. Sullivan and Meng climb the cage to block the camera shot.

Randy Savage is next in. He gets a Boston crab on Zodiac, but Shark breaks it up. The heels on the outside keep on grabbing on the faces to stall them, almost pulling Savage out through the gap.

Kamala is in and attacks Sting. Shark with an atomic drop of all things on Macho. Nothing happening of note. Zodiac spends his time pulling up his gauntlets as much as Shark pulls his tights up.

Lex comes in and clotheslines Zodiac. Double clothesline on the fat boys. Randy and Sting are brave enough to try and come off the top rope while hunched over. Lex then accidentally clotheslines Randy, the man he has a preexisting issue with, causing tension between them.

Meng and his mullet come in and takes apart everyone. No real innovation beyond a few throws into the side of the cage.

Hulk finally comes in and throws powder at everyone. Zodiac normally keeps it in his tollbooth. Speaking of, he does some goofy bouncing off shots for his buddy. Starrcade ’94 main event, guys(!). Corner clothesline for Shark, then Zodiac gets caught in the camel clutch (a callback to the Desert Storm matches Hogan had with Sgt. Slaughter in 1991) and accidentally submits when he gets into his “Yes! No!” routine and says “Yes!” to submitting. Goofy shit.

Taskmaster tries to walk out, but Doug Dellinger cuts him off and has the crack (meaning there were probably on it) security team pushes him back. Hulk gets him in courtesy of Sting and runs him back and forth into the cage, but the Giant comes out and torques Hogan’s neck to injure him ahead of Halloween Havoc and their even more infamous match.

How bad was it? Incredibly boring and heatless, with a goofy cast of characters playing the fall guy for the aging Hulkster.

Abdullah the Butcher vs. Zeus

From Puerto Rico, with Tiny Lister seemingly skipping a nice WrestleMania VI payday to slum it here! Zeus attacks early and they just choke and chop each other on the outside for a bit, with Zeus’ blows looking terrible. Take away the movie star credentials and Zeus was just another green as grass rookie who would need a control freak like Randy Savage holding his hand through a basic match. Abby follows him in and it’s slowed down immediately to stalling. Then a copy of the stuff from the outside, with Zeus’ blows looking like he’s trying to hit someone with the inside of his wrist, the fist totally separate to the shot. Abby is generous to blade, as always, and puts him down with a thrust to the throat. Zeus goes down on that and then tries his shots again, most of them not even connecting and the crowd booing in response. Butcher goes for the fork, but Zeus cuts him off and takes it from him… then continues with the same crappy shots, the fork not included. Abdullah puts him down for a shot and looks ready to go for the elbow, but he won’t roll into position. The moment he sees him flat down, he drops a weaker version. Up from that and Zeus runs the ropes with his arms pinned to his side. The sadness continues, as he can’t even do a clothesline. One is like he’s flapping his arm, the second Abdullah walks into and blocks. He gets Zeus down for a nerve pinch, which is broken, then Zeus tries a grounded monkey flip, with Abby being absolutely the wrong person to try that bump. Zeus stands around like he’s waiting for a bus, hands on hips, so Abdullah hits and kicks him in the balls three times until he goes down. Long wait to get him back up, and it’s more choking and forearm shots, with the crowd definitely disenchanted. Zeus goes out and applies a bearhug from the apron, pushing the ref away when he comes to break it. Thought that might be the DQ save, but both wrestlers go outside and make it a double count out instead, with Zeus almost using a wooden lectern as a weapon.

How bad was it? Absolutely awful, with Zeus not having a single thing he could do convincingly, leading to beyond a massive disappointment with the match, bottomed off with a non-finish.

From Big Japan, I feel like I’ve reviewed this before, although it could be that it’s just the same match as the one with scorpions. An American YouTuber is doing some contextual commentary over this. You have to place your opponent in a glass tank about a foot full of dirty water with “piranhas” or whatever swimming about in it. Also, barbed wire boards in two opposing corners. The water does move around a lot when either guy’s head is teased into the tank. Matsunaga is bleeding, with it dripping into the water. Powerbomb and a weird piledriver, with Matsunaga not grabbing Nagasaki’s legs when he drops, weaken Matsunaga for a trip into the glass tank, which Nagasaki places one of the boards over to trap him inside and secure victory. Matsunaga does his best to keep his face away from the water as some of the locker room run out to see Nagasaki off and attend to him and his bitten chest. I’d be worrying about my dick.

How bad was it? It’s in clip form, so hard to fully rate, but just really not my thing. Daft as I am, I’m as worried about the fish getting squashed as much as anyone getting bitten.

From the Spectrum, hence Dick Graham on commentary. David takes his time to shake hands with and talk to the ref before Shaw, hoodie and all, enters the ring. Probably making his apologies early. Shaw pounds and kicks away, then almost falls over giving David a slam. Two more are better. Gorilla recalls Shaw breaking his leg a year prior in Saskatchewan (“Not one of my favourite places!”). Another pair of slams as the pudgy and balding Shaw flexes, his lumpy pecs on top of his belly. Irish whip into the rope and David, who hasn’t gotten a single blow in, is caught in a bearhug and waves frantically to submit. Gorilla is immediately questioning it and the crowd chants “Bullshit!”. Mel Phillips tentatively announces Shaw as the winner, with Gorilla declaring it “Highly unlikely!” and questioning if the referee needs hearing aids as he thinks a Sammartino would never quit in his life. David sells it like he’s broken his back for a minute, then walks out like he’s got a sore shoulder and has been kicked in the ass.

How bad was it? Total squash, not especially entertaining either, but fun to watch David commit career suicide over pettiness with the office and his dad. Shaw stills kayfabes that he won the match fair and square, clinging onto that moment of infamy forever.

From the USWA in Texas, 1990. Very much a dilapidated Devastation at this point, with nobody the likes of Kamala, One Man Gang or King Kong Bundy, instead settling for Gorgeous Gary Young, the Angel of Death, Sweet Daddy Falcone and Chico Torres. They’re wearing party hats and blowing horn, with Akbar wearing his on top of his headdress. Percy Pringle is the interviewer for this as Gary announces that it’s the 10th anniversary of the formation of Devastation Incorporated (no idea if it was or not). Ak, normally very dour and serious, looks incredibly amused and hams it up receiving a money clip from his men as a present. They have a pink birthday cake with the candles lit, presumably to blow out, but the draught in the Sportatorium blows them out as they lift it. No cutlery for cutting it, so they just disgustingly scoop it up with their hands and get it in their facial hair. Newcomer and resident moron Chico presents Akbar with a jug of his grandma’s hot sauce, which Percy and everyone else dip some chips in and immediately spit out as soon as it hits and burns their mouth. Chico, who seemingly has a fireproof innards, swallows them down like it’s ice cream. No real finish, so Akbar just wraps it up with some knocks on the USA and Angel gets a dad joke in.

How bad was it? Just some campy silliness that probably lasted no longer than the segment unless they had plans on doing an angle where someone got the hot sauce poured on them or thrown in their face. Showed how low down Devastation was from year one to year ten.

The meltdown: Next week will have another War Games match, plus any suggestions you have. Thanks for reading!