Live from Washington, DC, with a rather small looking crowd tonight.  They really need to try some new markets on the West Coast or something.

It’s the third anniversary of Dynamite and you know that means we are going to be seeing something special. In this case we have a big tag match main event as Chris Jericho and Sammy Guevara are facing Bryan Danielson and Daniel Garcia. As a bonus, the show is an extra fifteen minutes long tonight so let’s get to it.

Charlotte Flair Missing From WWE Due To “Personal Reasons”

Andrade El Idolo has revealed that Charlotte Flair is currently absent from WWE due to personal reasons that will be explained in the future.

Has Bray Wyatt just dropped another hint that he could be on his way back to WWE?

Tony Khan On His Current Relationship With MJF

AEW President Tony Khan has explained the state of his current relationship with MJF after a turbulent 2022 for the two men.

Sean Mooney and Bobby Heenan are this evening’s hosts.  Heenan insists that Vince McMahon is still getting cosmetic surgery.

WWF Tag Team Champions the Nasty Boys and Jimmy Hart come out.  Hart says that his guys can do whatever they want because they are champions.  They drag a fan out of the audience and give them the Pit Stop.  Jerry Sags shoves his exposed toes into the poor fan’s mouth too. 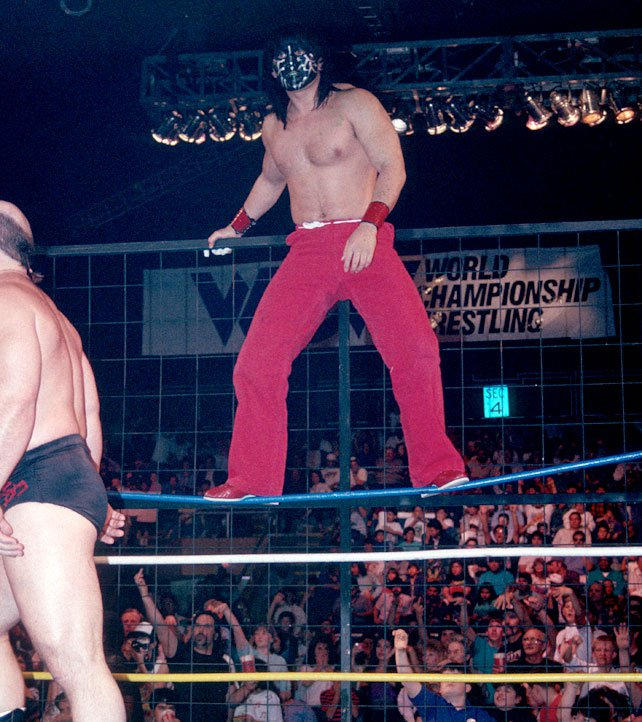 The Great Muta in his legendary North American run.

Welcome back to more Dream Matches! As I realize I’ve not done a lot of extra reviews since I got back from vacation, so this is even more of a smattering of weird small matches than usual! But I found some weird oddities here, headed off by a No-DQ match between The Great Muta & “Hot Stuff” Eddie Gilbert! Gilbert’s one of my big black holes of fandom, as I didn’t watch other companies in the 1980s and he died before I paid attention to any of them.

Next up, we have a pair of “Established Stars vs. Weirdo 1997 Gimmicks”, as the prior era of the WWF dies down and we still have some lame gimmicks kicking about until the Attitude Era truly begins. Come see Ken Shamrock vs. Salvatore Sincere, and Mankind vs. The Sultan! Poor Sultan had even lost his MANAGERS by this point!

Then I get into more Silver King, as I see what happens when he takes on an American jobber in Rocky King (translation: it’s ugly! There’s a reason most lucha-trained guys fought only each other!)! And finally, it’s WCW tag mayhem, as The Steiner Brothers fight The Blue Bloods (Steven Regal & Dave Taylor), and the Road Warriors fight job squad Pat Tanaka and The Gambler! Yes, WCW was so into hiring WWF cast-offs they had PAT TANAKA!

NO DISQUALIFICATION MATCH:
THE GREAT MUTA (w/ Gary Hart) vs. “HOT STUFF” EDDIE GILBERT (w/ Missy Hyatt):
(NWA Power Hour, Aug. 12th 1989)
* From Muta’s legendary US run comes a match against Eddie Gilbert, whom I know almost literally nothing about. He’s some short southern guy (the same height as his high-heeled valet), but was considered a great mind of the business, but died young at only 33 of a heart attack. Muta silently grabs Missy and spews the green mist DIRECTLY in her face in a great bit, just looking like a total demon. Eddie, in baby blue tights, attacks immediately.

We continue on from last week as we pick up the countdown of my Top 50 Favourite Wrestlers. I should reiterate here that this isn’t supposed to be an objective list on who I think the best wrestlers are but rather a subjective list of the wrestlers that I personally find entertaining for one reason or another.

For those of you who weren’t here last week, please check the archives to get yourself updated on the first 15 selections if you feel like doing so.

Read more
Rants
In contrast to the “matches you were sick of” post, how about the opposite: matches that didn't happen very often or was a one-off that you wished could have happened more often? Good example is Bret Hart-Mick Foley. They only met once that I know of on TV, on one of the first Shotgun episodes, and I really wish they could have met up more often, or even feuded. That pairing could have been a really good IYH main event (appropriate since a running joke on Foley's podcast is that he is basically Mr. IYH). What are your realistic pairings you wished got paired up more often?
I wish we would have got some meaningful Bret v  Rock matches before Bret left.  Shawn Michaels and Ted Dibiase had crazy good chemistry and deserved a bigger stage for it.  Rick Rude and Hulk Hogan or Rude and Savage should have been big business too.
Rants
I’m actually going to resubscribe to Peacock for Crown Jewel. Does it make me a bad person I am willing to pay for a 3 minute squash where Roman murders Logan Paul?

I waste ludicrous amounts of money on that stupid WWE Champions game.  Whatever makes you happy is your own business, man.

Rants
When did they start calling it that? I always remember Gorilla in the announce booth so I'm assuming he was always at the curtain area at house shows? I never understood that.
I first heard it in the 90s but given his position backstage he was typically there when not announcing for the bulk of Vince’s expansion.
Rants

You know, the 82 era of Mid-South is becoming a bit of a drag and I’m sick of Bob Roop and the various child predators on the shows, so let’s jump ahead to 1983 instead and see how that goes.

WWE have appointed a new Director of Long-Time Creative who once made a very interesting pitch regarding Bray Wyatt.

After weeks of speculation it appears that a star from Monday Night Raw is now back in NXT.

Dan Lambert has hailed Jim Cornette as the greatest wrestling manager of all-time while also tipping his hat to a current star.

We’re coming up on Halloween Havoc near the end of the month and the card seems to be set. They still have a few things that need to be done to get ready for the show though and we will probably get some more of that build this week. We also have some guest stars coming in this week from Smackdown so things should be feeling bigger. Let’s get to it.

Jake Roberts – “Without Me There Is No Undertaker”

The drama continues in AEW with Sammy Guevara very publicly firing back at accusations made by Andrade El Idolo.

Charlotte Flair has not been seen on WWE television in quite some time but now she has given an indication of what her next move might be when she returns.

Rants
I finally watched Starrcade 89 and of course agree with all the complaints about the format. I know you've answered too many questions about how to rebook it, but I'm curious how Meltzer would have done it. I checked your Observer Flashback, and below is what you wrote. Care to revisit it now and share what he said? Sounds like he had some good ideas.
– At this point he goes into a lengthy, 3-page fantasy rebook of the show, detailing what the card should have been and what finishes he would have booked. The end result is a beautifully detailed roadmap of the promotion for years to come. I don’t really feel like going over it, though.
Look, it’s a famous issue of the Observer and everyone who needs to know already has it memorized and knows how it influenced Tony Khan on the formation of AEW.  I could rehash it again and go over all the intricate details but it would literally spoil the next two years of Dynamite and I don’t want to be that guy.
Rants
Is there any legitimate business case for WWE having part time champions for significant periods in past couple years (Lesnar and Reigns)?   Does it help the title feel more significant or pop higher ratings/ticket sales when the champs are advertised?
Seems like WWE made the decision that Reigns show up half the time as champion is better than McIntyre being on every PPV as champion
To be fair, that was a Vince decision.  We don’t really know what Papa H wants yet.
Rants
…but are the frequent Eddie Guerrero homages not getting to the point of being a bit ridiculous now?

I feel like no show passes nowadays without at least one Eddie reference/homage/shoutout, and often more than one.
Someone like Rey doing it? Sure – they were pretty close and it's a nice thing to carry on. Objecting to that would be silly, I admit that happily.
But we're probably getting close to the stage of having folk pointing to the sky and doing an Eddie shoulder-wiggle who were probably born after he died. Certainly there'll be a few who will have no actual memory of him beyond seeing him on tapes.
Beginning to feel a bit like it's just being used for some cheap and easy crowd appreciation.
Ok. My tin hat is on. I'm prepared to be smacked upside the head.
It’s definitely overdone.  No smacks from me.
Rants

For those keeping track, I’m using the WWE Network version of this one because my copy is pretty janky. Now I’m just waiting for chrisH to jump in and be like “They actually cut out a **** hidden gem with Antonio Inoki from New Japan in 1983 on that version and put in an ice cream bar factory skit instead for music licensing reasons.”

AEW Star Set For First Dynamite Match In A Year

This AEW absentee is returning to Dynamite for the first time since before All Out 2021, answering Wardlow’s TNT Championship open challenge.

Bret Hart To Appear In Tales From The Territories

Tales From The Territories will venture to the Great White North as they cover the legendary Stampede Wrestling with help from Bret ‘Hitman’ Hart.

It’s the go home show for Extreme Rules and the show is mostly set. However, it still doesn’t feel like there is anything that stands out as a main event. I would assume it’s going to be the Fight Pit between Seth Rollins and Matt Riddle, but the card feels like it is lacking something even if there isn’t much room for anything else. Let’s get to it.

A new report has shed light on the backstage reaction in WWE to the return of previous NXT stars Johnny Gargano and Candice LeRae.

Brandi Rhodes’ return to wrestling is still up in the air despite having trained at the WWE Performance Center.

Oney Lorcan is set to return to WWE to take up a new role in NXT, a little over a year after being released by the company.