Welcome to more Dream Matches! This time with my new obsession: random forgotten characters! All of this is readily available on YouTube.

So the accepted story with Max Moon goes as follows: Lucha superstar Konnan was brought in to the WWF by Vince McMahon in hopes of playing this futuristic spaceman superhero-type character. He spends a bajillion dollars on the suit, including gauntlets that fire streamers and a steam-shooting rocket pack to “jump” up the ring steps. But then Konnan, owing to his success in Mexico (where he was actually on a soap opera, plus was selling out major shows) and the fact that the suit took a ton of effort, was like “fuck this” and bailed, never even making TV with the gear. Vince was furious and left with this wildly expensive ridiculous suit, at which point Paul Diamond, probably about to be cut as his “Kato” persona was now a complete jobber act, made one of the smartest observations in history: “Hey, I bet I could fit in that suit”. And so suddenly Diamond is now repackaged as this new character, adding about 4-5 months of WWF paydays to his career until they cut him loose for real. Diamond explains some of it, here.

It’s pretty clear right away the character is a mess, though- not only does he look ridiculous, with a powder-blue bodysuit and big puffy piping all over it (with a pretty bad mask- leaving way too much of his face exposed- ya gotta “Rey Mysterio” that shit), his name undergoes changes almost immediately (starting out as “Komet Kid”). Like, nothing says “half-assing it” like coming out as one name and then suddenly changing it later (see the Viking becoming the Berserker). He gets only one feature match on WWF TV (reviewed below), and spends most of his time beating Repo Man at house shows according to CageMatch- once his push is done, he’s instead jobbing to Skinner & Rick Martel. He makes the Royal Rumble as “Ring Filler” and is done.

THE KOMET KID vs. DUANE GILL:
(WWF TV, Sept. 27 1992)
* So here’s Diamond in his debut as “Komet Kid” (no graphic here, but another show does in fact spell it with a “K”), taking on the most played-out WWF jobber. Already you get the full gimmick, as he fires streamers from his gauntlets, then hops up the ring steps “assisted” by his backpack’s “rockets”. Gill has his blonde skullet and a black singlet.

Diamond, to his credit, plays up “Lucha” pretty well, rolling around the ring to throw Gill off, then hitting a big dropkick and twirling around with choreographed armbars and a ton of armdrags. He avoids a corner charge, slides under Gill, then hits a leg lariat, impressing Monsoon on commentary. Then he just gobbles him up, hitting a monkey flip, rolling senton, leg lariat in the corner, and a Rolling Fireman’s Carry Slam for the win (1:55). Dominating win with some very unique offense for the time period- if it’d been a different era I can see him getting reasonably over as a midcard “Workrate Guy”.

Similar opening to the prior match, with more complex armholds, a monkey flip and armdrags. Barry catches him with a jawjacker, declaring “now it’s time to wrestle!”, but after scoring some European uppercuts, he runs into a boot and eats a big bulldog off Bret’s Rope. Two leg lariats set up the Rolling Fireman’s Carry Slam at (2:20). Similar to the first, but with a minor comeback for the jobber.

INTERCONTINENTAL TITLE:
SHAWN MICHAELS vs. MAX MOON:
(WWF RAW Debut Episode, Jan. 11 1993)
* Max Moon’s career pretty much peaked right here, as a disposable challenger for Shawn Michaels in his first IC Title reign on the very first episode of Monday Night RAW. He actually comes out with NONE of his ring gear, which is a bad sign right away (as is this not being a main event in favor of one featuring DAMIAN DEMENTO). Shawn’s in the red tights with white hearts, sans Sherri (who he’d just pulled in front of a mirror when Marty Jannetty returned). These two are actually VERY familiar with each other, the Rockers having feuded with the Orient Express in the past.

RAW was such a game-changer at this point- the Hammerstein Ballroom setting and camera angles make it look very unique. Rob Bartlett makes his trademark awful jokes as they run through a pretty smooth counter-wrestling sequence of basic stuff- Moon winning with an armdrag and a slam. Mat slam and hammerlock, with Shawn punching out after the break, hitting the corner on a charge, but managing to drop Moon on the top rope after another. We get distracted by Doink the Clown (in a cast after Crush “injured” his hand) while Bartlett does an awful Mike Tyson impersonation, and Shawn hits a few measured punches and a whip to the corner. Moon gets an inside cradle so Shawn goes for the eyes. Back elbow and chinlock, but he misses a dropkick and gets launched outside with a slingshot. He dekes Shawn out with a pescado and hits a running high-Thesz Press (okay, basically a dick to the face) off the apron, which is pretty cool for ’93 WWF. European uppercut, running leg lariat in the corner and the Rolling Fireman’s Carry Slam… for two! Yup, his big finish fails. Moon settles for a rolling senton, but misses, and Shawn cranks him with a reverse crescent kick (pre-“Superkick”, where it’s just a transition move), setting up the Teardrop Suplex… but Max leaps out, misses a shot and gets hooked in it for real at (7:55).

Started okay, but got very slack and “meh”, with Shawn hitting very basic stuff, taking twenty seconds between every move, mugging for the camera and making it an extended squash. But once they reved it up again it got pretty good, with Moon showing the goods and Shawn looking good in victory, kicking out of the finisher. His own weak finish lacks drama (who cares about a regular back suplex like that?), but there were some good counters.

Rating: **1/2 (fine enough TV match that got pretty good in the end) 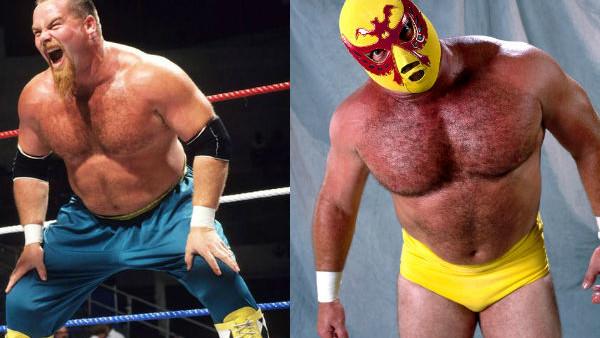 THE UNDERTAKER (w/ Paul Bearer) vs. WHO:
(WWF Superstars, July 23 1996)
* Yes, the very random appearance by Jim Neidhart in mid-1996 WWF as the masked “Who”, wearing tiny yellow wrestling undies that make him look like a super-dated luchadore from a bygone era. I think the deal here was Vince was still paying off some kind of lawsuit, so would repeatedly re-hire Jim for random stuff? I dunno- it’s been a while since I read Bret’s book. In any case, this gimmick lasted a month or so, and was there largely so Vince & Lawler could trade “hilarious” “Who’s on First?” style jokes. He didn’t even win any token jobber matches on TV, near as I can tell- he was just a pure Jobber! Taker, in his purple gloves, was getting ready to face Mankind in the Boiler Room Brawl.

Who jumps Taker and does some VERY prominent “stomp punches” that people mimic when they make fun of pro wrestling, but runs into a boot. Taker misses an elbow, but does his patented “duck under the arm; hits a flying clothesline on the follow-through”. Tombstone and we’re done at (1:08). Well that was quick! 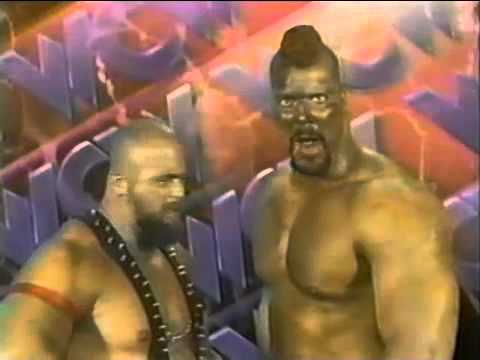 THE MASTER BLASTERS (Steel & Iron) vs. BRAD ARMSTRONG & TIM HORNER:
(WCW, Sept. 5th 1990)
* And welcome to the debut of the young Kevin Nash, roided up and covered in Johnny B. Badd’s spray-on blackface (or I guess that’s oil and/or grease, I suppose). His partner is not Blade (Al Green), but Cory Pendarvis, a Scott Norton-like squat powerhouse of a dude who just looks silly because he’s next to a 6’10” guy who dwarfs him so badly. He apparently doesn’t last beyond this match- let’s see why! Nash has a red mohawk/mullet combination, which is hilariously only like the second worst hair he’s had in wrestling, while Iron is bald. Brad & Tim were jobbers at this point, both in matching red trunks.

Jim Ross on commentary points out that this is the debut of the Master Blasters, who really should have had a manager to talk for them. The Blasters use clubbing blows and fireman’s carries to dominate Horner, but Nash misses a charge and takes some punches. He grabs the ropes to avoid a dropkick (why is a 6’10” guy doing stuff like that to avoid moves? JUST TANK IT!) and drops an elbow while Iron misses a falling headbutt by a foot. Iron then does possibly the worst non-Gayda move I’ve ever seen, bouncing off the ropes for another “headbutt”, but more or less just diving head-first into the mat with his arms up, lightly grazing Horner with his shoulder. Horner just kinda rolls over like “Well I can’t SELL that, but I have to act discomforted” and tags out to Brad, who pounds away but eats a jumping shoulderblock. Double-clothesline gets two. Nash’s powerslam gets the same. Brad dodges an elbowdrop and hits some stuff, but eats a boot. Iron’s shoulderblock, elbow & legdrop get two-counts, but Brad leapfrogs over and hits a dropkick, sending Horner in for a back bodydrop and sleeper- Nash breaks that up and they dump Brad, leaving Horner easy pickings for a Double-Shoulderblock (4:49).

I came here to snark on Nash, but HOLY GOD was Iron bad- just missing half his shit and having that “I don’t realy know how movement is done” awkwardness to him. Seeing this I can pretty much imagine whomever was watching just cut bait on that dude immediately and sent him back for more training- I don’t even know who he is. Nash was obviously limited, but he didn’t do anything he couldn’t do and actually knew how to walk, so he didn’t stand out as particularly bad. That finisher is terrible, though- and why do a Double-Shoulderblock as a finish and then do 2-3 shoulderblocks during the regular offense of the match? 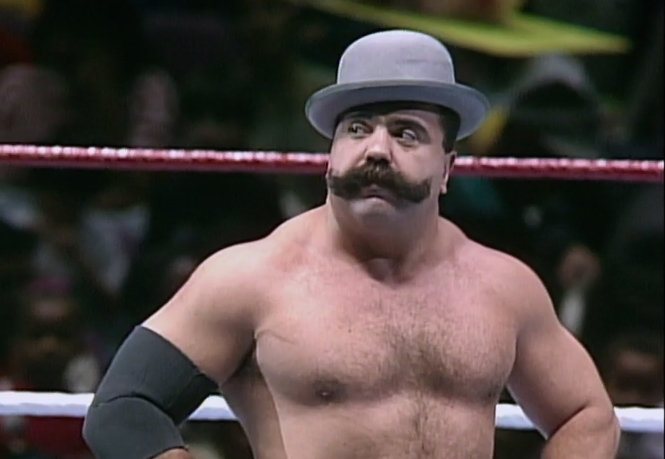 BIG BULLY BUSICK (w/ Harvey Whippleman) vs. JIM “THE ANVIL” NEIDHART:
(WWF, Oct. 21 1991)
* And it’s the “Dream Matches” debut of the most random “short-lived WWF wrestler” guy ever, to me- Big Bully Busick! He was a 14-year veteran by this point, doing this turn-of-the-century bullying gimmick with a GIGANTIC handlebar mustache and a powerlifter’s physique. It was incredibly bizarre, and lasted only from July-November in 1991. This makes him almost a total mystery to me, as I wasn’t watching regularly quite yet, and he never made PPV. Neidhart is on the New Foundation at this point, so he comes down to the Heavenly Bodies’ later theme song and wearing TURQUOISE parachute pants.

Bully & Neidhart do basic power stuff to start, milking lockups- Bully takes a shoulderblock and hiptoss after a criss-cross, but jumps Anvil when he goes for Harvey on the apron. Lots of choking on the ropes follows, along with a weak clothesline and a chinlock. MORE chinlockery abounds until Jim gets his knee up in the corner. Another shoulderblock, but Harvey grabs his leg, and Anvil DRAGS him into the ring… earning Bully the DQ at (5:06). Wow, THAT’S the ending? Bully’s axehandle is completely no-sold and he’s punched out of the ring to end it. Clearly not much was expected of either guy by this point- a newer heel act and a tag guy wins by DQ? The match was practically all stalling and chinlocks.