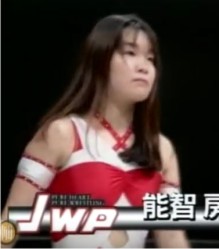 Two Joshi Spotlights in one week? Why, it must be “write a bio of someone with a short career” day!

-Yes, it’s time for another “Wait, Who?” bio, as I look at Fusayo Nouchi, who I mostly recognize as “The One Who Isn’t Candy Okutsu”, as the two were paired up in similar outfits for ages on undercards for Japan Women’s Pro Wrestling. Her career was so short (only four years) that a proper assessment is difficult, but she seems like a pretty solid undersized rookie. She probably would have been a bigger star in the later era, where teeny-tiny girls were the norm and being 5’2″ didn’t make you look like a dwarf up against monsters like Dynamite Kansai & Devil Masami, the main eventers during her run.

She seems quite good for her experience level- she’s quick and spry in the mostly undercard stuff I’ve seen- when wrestling Hiromi Sugo (just a bit below her in experience), her stuff looks good and Sugo’s looks terrible. Nouchi could generally be relied upon to hit **1/2 or so in undercard stuff, and mostly just lacked diversity in her offense- as a rookie she was mostly enforced to do the basics until she started getting a push, and that never really came. I’ve seen a match against Candy Okutsu (who was slumming it) where Nouchi’s selling was pretty great, at least. Generally, her stuff looked tight and good while not necessarily being outstanding. Though one of her final matches sees her hit a Super Saito Suplex and that was pretty awesome. 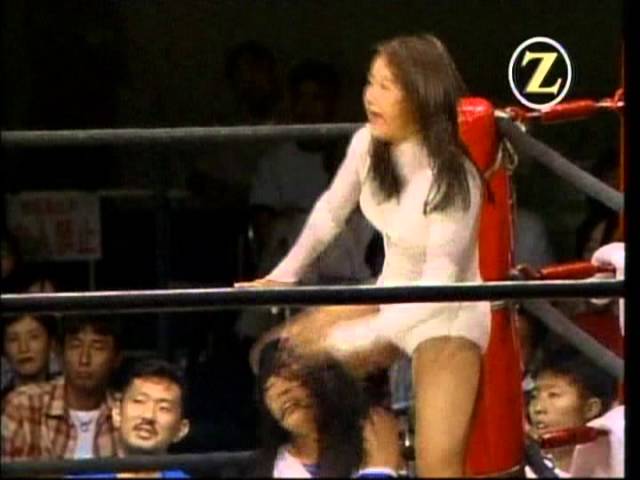 Blurry video captures is all you get! The life of a “mediocre joshi star” biographer is hard!

CAREER TRAJECTORY:
-Fusayo Nouchi (I think I’ve read it as “Nouchi”… or I’ve just been misspelling it since I started this damn column- no wait! Joshi City & Wikidata have that!) debuted for Japan Women’s Pro Wrestling (JWP) in 1992. Initially she’s a random jobber, even losing to AJW’s Chikako Shiratori in an interpromotional match. In 1994… it’s again Jobber City, though hilariously she finds her own rookie to trounce, defeating Hiromi Sugo on repeated cards. But even rookies like Hiromi Yagi beat her a bunch of times (though she manages one win against Yagi). This is nothing out of the ordinary for a rookie wrestler, though- if anything, it’s quite something to show her in so many singles bouts- most other promotions just have tags most of the time.

At Wrestlemarinepiad 1994, she actually beats Kumiko Maekawa, her AJW equivalent (Kumiko’s career would… outstrip Fusayo’s by a ways eventually, however). Around the same time, she beats Rie Tamada, who was also just beginning to show up on TV. 1995, however, is not her year- I only see about one match per month on Cagematch, as she’s doing stuff like winning tag matches against other rookies, and losing to Candy Okutsu in a match for JWP’s Junior Title. However, she does get her career highlight, which was being part of JWP’s contribution to the Bridge of Dreams super-show at the Tokyo Dome- here, she was the lowest-ranked person in the match (an 8-Woman Tag featuring all the top JWP stars). She’s kinda just… there, though. In my recap, I mention her all of one time, so obviously nothing she did affected the overall story of the match, lol.

Chaparrita ASARI defeats her in a WWWA Super Lightweight Title Match at an AJW show in 1996. This match is no longer on YouTube, but I found it to be really great at the time- I probably overrated it by giving it ****, though- I was impressed by all the flying stuff!

CANDY OKUTSU vs. FUSAYO NOUCHI:
* I actually don’t know when this match took place- there’s like a dozen singles matches featuring them, lol. Nouchi’s in red & white, and Candy’s in blue & white- both generally dressed sorta like a tag team. They’re in some small white gym here.

Nouchi dominates the early going with arm stuff and some running attacks until Candy finally does her corner-dodge into a missile kick for two. Candy then hits like three goddamn minutes of a Boston crab & chinlock- at least Nouchi sells it well, and periodically yanks hair or bites her way free. Nouchi gets a sunset flip out of the corner for two and then does her OWN crabs, with a Liontamer-like one used as another weardown hold. Candy does a drop-toehold into a Japanese leg roll clutch for two to come back, then hits a DDT for two and the crowd are actually super-appreciative of the kickouts. Candy locks on a good figure-four around the neck, choking Nouchi with it- Nouchi tries to bridge it into a pin, but Candy rolls her onto the stomach and just starts bouncing her head into the mat with it- good stuff. Nouchi finally has to make the ropes, unable to squirm out of it, and Candy backdrop suplexes her for two. Nouchi hits a victory roll for two, then they both try rollups and miss flying attacks as the pace quickens. Nouchi hits a missile kick for two, then catches Candy trying her corner-dodge again and superplexes her for the same. Candy reverses a backdrop to a German for two, but Nouchi tries another rollup, then gets her knees up when Candy goes for a flying splash. Nouchi climbs, but that’s it- Candy runs up the ropes, then gingerly places her in a Northern Lights Superduperplex, getting the pin at (14:28).

Okay, so it’s basically ten minutes of sitting on butts and then an interesting figure-four around the neck, but at least that part was good- Nouchi worked to sell and acted pretty dramatic, though Candy seemed to view this match more as “filler”. Things picked up with Germans & rollups as they kept trying to catch each other, with Candy just being a bit too good- she was the same size as Nouchi and was vulnerable, but her offense is too varied and just caught her. The finish was appropriately big considering neither had been worn down that much beforehand, though they took so long to get comfortable in the move (to avoid botching it) that it wasn’t as smooth as it could have been- it’s kind of a fancy move to be done as “quickie run-up into a reversal” deal.

Rating: **1/4 (fine match- mostly filler to start to pad for time and then it got good)

Nouchi attacks to start and they roll around in chinlocks for three minutes until ASARI comes back with the usual- springing out of a catapult and hitting a crossbody & running knees. She works the back, while Nouchi comes back with a Saito Suplex and arm stuff. ASARI hits the crossbody, but Nouchi dodges the next one, then hits a bridging vertical suplex for two. She gets the worst of a double-dropkick spot, then eats a Mule Kick before reversing the next to a facecrusher. Another facecrusher sets up a Superplex, but ANOTHER second try at a move leads to ASARI landing on her instead. Some acrobatic rollups get two apiece. Nochi planchas her after a Sky Twister attempt gets shoved off, then hits a pair of Missile Dropkicks leading to a bridge-out. Senton misses, and now ASARI throws out a plancha- she goes for the Sky Twister, but MISSES, which usually leads to the finish- a bridging German gets a VERY close two count! NICE Diving Senton gets another two! A frustrated Nouchi tries something else, but takes a Northern Lights Suplex. ASARI goes up again, but this time Nouchi hits a Saito Suplex FROM THE TOP, still only getting two! She freaks out and panics, letting ASARI catch her with a BEAUTIFUL Super Frankensteiner for two! Jesus, they’re throwing out all kinds of stuff! ASARI gets pissed off, and finally just wraps Nochi up in some cool sliding cradle (starting like a Majistral before rolling back like a Rolling Cradle with all the limbs trapped) for the three (14:35).

Holy crap- I was like “well this match seems long and from ASARI’s peak era; I might as well watch this to see what comes of it” and BOOM- they start slow, but soon elevate their game until they’re doing this great bit of one-upsmanship. Kinda neat how they did this thing where they would keep succeeding with moves, but the second one would get reversed. Then in the latter half they’re just trading huge bombs back and forth, reversing moves like nuts- a Saito Superplex followed by a Super FRANKENSTEINER? Nochi impressed in my first time seeing her, and I liked how it was a reversal-themed bout. And after all those crazy top-rope moves couldn’t get the pin, they had a Bret Hart-like “ends on a rollup” finish.

Rating: **** (I mark out hard for reversals, Avalanche-style moves off the top, suplexes and Escalating Finishers, as well as “Ending on a flash pin”… I wish I could find the whole match again to see if I’m way off base on my review. SHUT UP I’M NOT A MOVEZ GUY I SWEAR!)