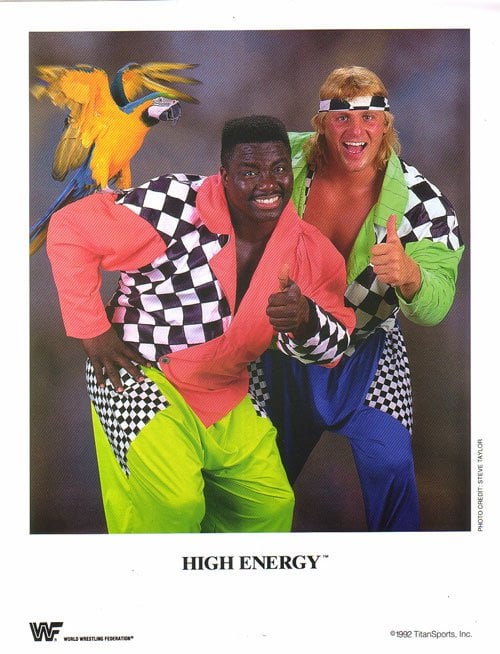 Ted controls with armdrags to start as Monsoon and Lord Alfred just divebomb High Energy’s infamous tights, haha- “They made a fashion statement there, but I don’t think anybody was really listening, do you?” “They left a lot of room for improvement, didn’t they!?” “Koko could get up to 400 lbs., and still wear those same pants!”. Ted gets cocky and Owen scores dropkicks, High Energy clearing the ring with them, causing Money Inc. to stall on the floor. IRS is distracted by an “Irwin!” chant and Koko’s bird dance, but manages to knee him, only to take a crossbody and dropkicks and has to bail- Monsoon & Hayes accuse Money Inc. of having taken them lightly. Koko does more taunting but DiBiase knees him from the apron and takes over with his patented smooth brawling. Double-teams abound and the ref misses Koko tag out, but he finally reverses an IRS suplex to bring in Owen, who clotheslines Ted around and over the ropes, but his hot tag goes nowhere as Koko fights IRS in the ring and gets sent out, allowing the briefcase to get involved and smash Owen on the outside of the ring, netting Money Inc. the Count-Our victory at (8:44).

Interesting match, but about 55% stalling to begin, then a basic heat sequence with simple brawling, and then Owen’s hot tag lasts all of 20 seconds before it goes south! Like Owen was barely in the ring for more than a minute and didn’t get to show anything but the same basic four moves.

Rating: *3/4 (perfectly OK for a TV match, but almost all stalling and simplistic brawling)

Identical start as last match, but we’re clipped to Owen scoring a comeback with ’80s offense. High Energy controls IRS’s arm, but Ted ganks Koko from the apron like last match and they work him over. Koko & IRS clothesline each other and Owen goes to work with clotheslines on everyone- atomic drop for IRS & back body drop for Ted, but Owen tries another and gets caught- a SWINGING NECKBREAKER of all things pins him at (3:25). Wow, what was THAT? Match was pretty heavily clipped- even the audio getting cut out, so who knows where this was transferred from. Pretty much a hyper-abridged tag bout with mid-80s offense (atomic drops and clotheslines from Owen looks weird) until the abrupt end.

Rating: * (too little of a match to really rate) 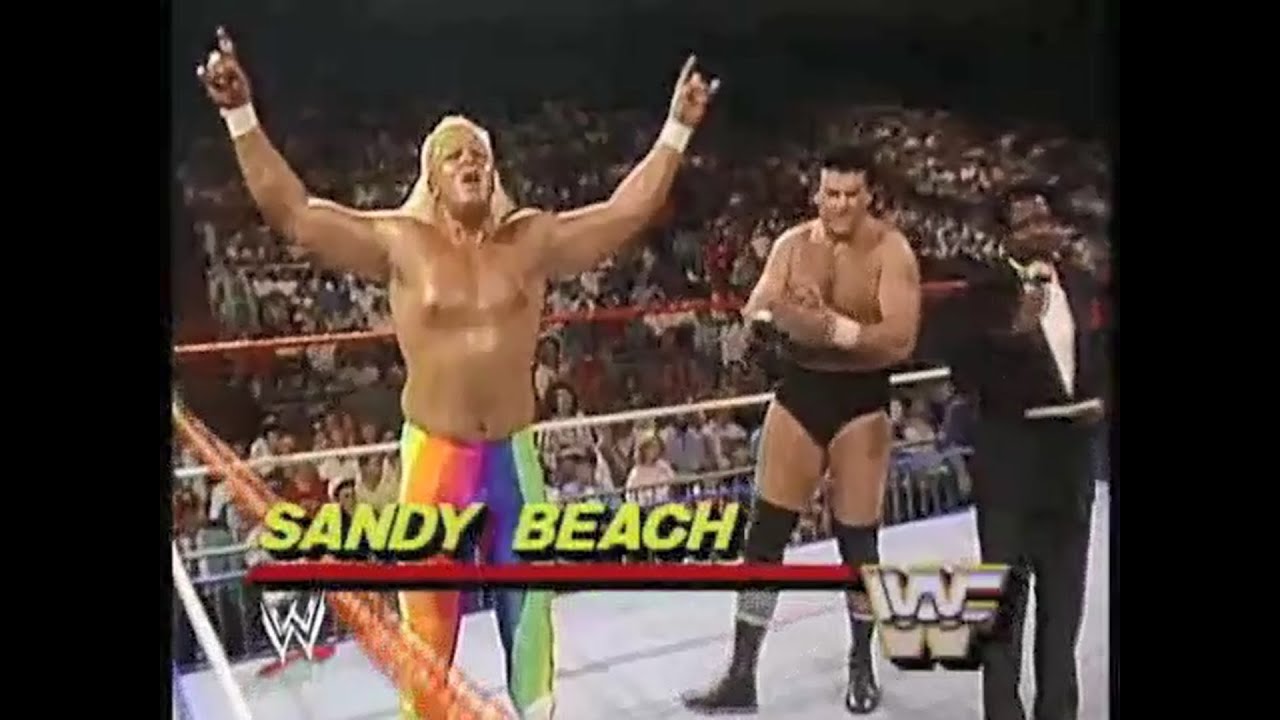 THE YOUNG STALLIONS (Jim Powers & Paul Roma) vs. IRON MIKE SHARPE & SANDY BEACH:
(WWF Wrestling Challenge, Oct. 16th, 1988)
* Oh yes, SANDY BEACH. The dork from Herb Abrams’s UWF who sobbed because Herb was the only promoter who ever believed in him, and here he’s a jobber in horrifying vertical-striped multicolored tights alongside Canada’s Strongest Man. He’s called “Sunny” or “Sonny” Beach later on, cuz I guess “Sandy” is just too ridiculous.

Beach, a pretty big guy, overpowers Roma for a bit, but Roma actually does a vertical leap straight to the top rope and bounces off with a cross-body for two, impressing Monsoon & Heenan on commentary. The Stallions do a double-team into a sunset flip for two, Beach clapping his knees over Powers and slamming him- Sharpe comes in growling & yowling, but misses an elbow and gets slammed. Drop-toehold/elbow & double-punch have him reeling, and finally Powers holds him up for Roma’s Missile Dropkick for the pin at (2:20). Not a bad finisher for the time, and they did solid double-teams, but they really fail to stand out aside from the ‘roids. Beach was rather strangely reversing their stuff and coming off like he was trying to get himself over, but you can always count on Sharpe to wail and job like a goon.

RIKIDOZAN vs. HAYSTACKS CALHOUN:
(Japan Wrestling Association, March 24th 1963)
* This is a clipped match from the JWA (which died and turned into New Japan & All Japan when Rikidozan’s top students Baba & Inoki split up). And man I didn’t realize that Haystacks made it all the way to Japan as one of Rikidozan’s “Gaijin of the Month” threats. Rikidozan had a fascinating career & life- the kind of thing you only get in pro wrestling (Korean national faking being Japanese to become a national hero, while also being a drunk and then getting killed by a Yakuza gangster since he hung with that crowd), and is a thickset, squat little dude who is not big on selling from what I’ve seen of his longer matches. Calhoun is a fair bit taller and just MASSIVE, looking every bit like his billed 600 lbs.

FALL ONE: Rikidozan plays evasive for a bit, but is soon seen underneath Haystacks, who just sits on him in the ropes repeatedly. Calhoun works a top wristlock using the hair, Riki unable to hiptoss him out (I mean, no kidding) and no-sells a gut kick, but wobbles on overhand chops. He belly-bashes the champ to death in the corner and hits a full nelson, then after a break he eats standard chops, doing this great “head-bobble” sell off of each one (since obviously he can’t move his body as much) and Rikidozan smashes him to a pulp. Haystacks is on his knees, but next clip is more belly-bashing from him- he lands the full nelson again and Rikidozan seems screwed, but he does the “Bret Hart Finish” by kicking off the corner and pins Haystacks 1…2…3 (3:35 shown)!

FALL TWO: Haystacks actually does a friggin’ drop-down off a whip and slams Rikidozan on the return, but misses the Splash- Riki shoots the half and tries to bring him over, but after half a minute the big guy just re-rolls on him. They brawl like big beefy maniacs until Haystacks actually FLIPS OVER THE TOP ROPE in a gigantic bump, getting dragged over the top by the champ. This is a Double Count-Out at (1:41).

Fun example of that era- the clipping probably improves the match tremendously, as it seems like it has a good flow. Though it’s funny seeing Rikidozan give up 400 lbs. to his opponent and still be able to easily put him on the ground with repeated chops & kicks. Too hard to really rate 5 minutes of clipped action but it could be **-**1/2 or so.

RIKIDOZAN vs. HAYSTACKS CALHOUN:
(Japan Wrestling Association, April 17th 1963)
* And the rematch, a month later! They probably cleverly had a recurring “no-contest into a rematch” thing going in the JWA at this time- Wrestling Booking 101.

FALL ONE: Haystacks does more head-bobbing off of chops, but controls with headlocks and slams, and an overhand chop and Splash pins Rikidozan at (1:24)! He won’t let him up and even adds punches. The crowd seems to contain a lot of Westerners, seen laughing and cheering him on.

FALL TWO: Haystacks puts on a bearhug and slams him, but misses another Splash- Rikidozan again can’t turn him over, but finishes with a Running Chop at (0:45)! The crowd is seen just uproariously laughing now.

FALL THREE: Haystacks now looks exhausted and beaten, and Rikidozan easily sends him out of the ring with repeated shoulder rams and he’s counted out at (0:35). Naturally, this one is too clipped to even rate, and seems to feature Rikidozan easily winning after a tricky start. 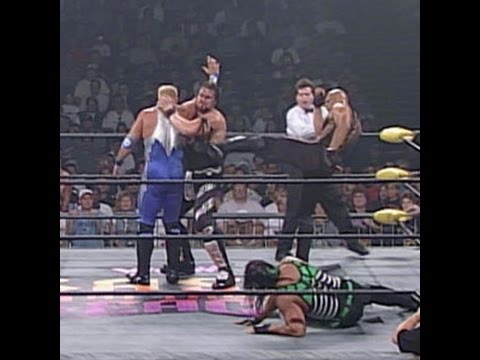 MORTIS & WRATH (w/ James Vandenberg) vs. LA PARKA & PSYCHOSIS (w/ Sonny Onoo):
(WCW Nitro, July 22nd 1997)
* Another random weirdo throwaway match, as WCW puts two of their second-tier luchadores against midcarders Mortis & Wrath! WCW had this odd way of taking potentially hot acts (La Parka was super-over and Psychosis one of the best workers in the company) and like “yeah, here ya go- job to the guys in the middle of the tag ranks!” because Cruiserweights were seen as disposable outside of their own division. This one’s kinda funny because of course Mortis & La Parka look like they should be on a tag team together.

Wrath, despite being a huge dude, actually loses a strike contest to La Parka, who leaps off the top onto Wrath’s outstretched feet, then takes the mother of all bumps off an elbow, backflipping to the mat! Heenan marks out, being the only commentary even slightly paying attention to this instead of some Flair/Hennig angle currently going on, and Mortis takes it to Psychosis, gives him an obvious instruction, then has to cover when Psychosis tries a run-up reversal of a whip only to slip and fall off the top rope. The commentary handle it perfectly- just “hey that’s why they call it high-risk” and Bobby points out that Psychosis is crazy enough to just try it again anyways, and sure enough, he reverses a whip to a running dropkick, then follows Mortis out to the floor with an insane suicide dive over the top rope, defying gravity in mid-air like Dante Martin does today.

Wrath goes out to check on Mortis and takes a corkscrew plancha from La Parka as the fans are getting into this, but the luchadores try a silly double-team and Psychosis accidentally does a leaping dropkick to La Parka on the floor when Wrath moves. Psychosis tries a pescado to make up for it, but Wrath easily catches him and press-slams him face-first on the floor, and Mortis follows with his suplex from the middle of the second rope into the ring. That gets two, but Mortis misses a GIGANTIC flying senton and the managers get into it on the floor- all four wrestlers hit the ring, causing the ref to miss Psychosis hurricanrana-ing Mortis for 3, so Wrath just grabs Psychosis and they hit that vicious Sit-Out Powerbomb/Neckbreaker combo for the easy pin at (4:35). And then La Parka comes in and smashes a wooden chair over Mortis’s back, so Wrath comes in and pump kicks him out of the ring! Man, WCW left a ridiculous amount of money on the table with these guys.

A very “Mortis” kind of match- MOVEZ-heavy and some killer, unique offense. I mean, look at that match time and how long the review ended up being- they stuffed a LOT of crap in there. The luchadores brought all the high-flying and took most of the risks and got none of the reward, but ate that monster finisher in the end (which Kanyon would re-use for his team with Raven, until they badly injured a Villano with it). Just an entertaining use of five minutes, guys throwing out insane stuff until someone lost. Visual pin only barely lets the luchadores keep some dignity. And of course all this hard work was meaningless because none of these guys got a push for ages, lol.

Rating: **1/2 (hard to hate these wild spot-heavy matches under 5 minutes. AEW tends to do these today, but doubles the match time and puts a commercial break in the middle to delay things)