The following review is brought to you by members of the New World Order. 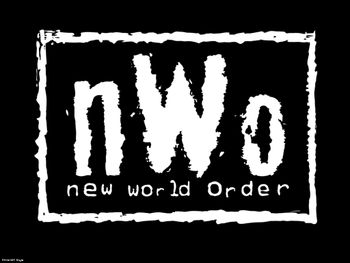 A bit of a cheat, as it’s several years before the group was formed, but any excuse to get an Oz match in. Either the date is wrong or Big Sexy took his old gear to Japan for this trip, because he was firmly Vinnie Vegas by this point. Nash spoke in later years about his annoyance of how stiff “Fat Elvis” worked. A part of me wants to say Kev has coloured his hair grey, but seeing as he’s been a permanent silver fox for years now I do wonder. Hashimoto annoys the big man with shoulder charges, then walks into a big boot. Shinya tries his own kicks to the legs, so Nash just hauls off with a big kick, swinging the side of his boot around to the left of his face as hard as he could manage. Hashimoto tries a side headlock takeover, which falls apart on the roll (shockingly!) given that a guy is try to take down a guy a foot taller than him. Some work on the left arm, which you know Nash has no idea how to sell properly given that he’s greener than his tights and boots. Slam and an elbowdrop for two for Hash, which again Nash wouldn’t probably go for even two years later after having Shawn Michaels and Scott Hall in his ear. He cuts off the offense with a flying clothesline and goes to the rear chinlock. Leapfrog over Hash on a charge and his low punch/bulldog combo that was one of his few high spots at this point. Backbreaker for two, followed by a weak full nelson. I know Shinya is a chubster, but couldn’t Nash have lifted him up a bit. Break on the ropes, then some walking around for a minute or so before restarting. Hashimoto throws a slap in the corner, then gets a spinning heel kick. Another for two. Messed up Irish whip leads to a DDT, then another to finish. Bad, bad, bad, bad match. Nash doing a bunch of shit that someone misguidedly told him to do because it’s cool if it’s a giant doing it, plus Hashimoto treating him like a giant jobber. BUST!

The B-Team invade New Japan, with Scott Norton and Buff Bagwell representing. Buff does the Ron Garvin towel toss tease, before giving the Italian salute. He’s at the peak of his physical fitness and ready to show it off, so Kojima rapidly chops him as hard as he can. Flip senton to the abs, which I’m shocked Buff didn’t do the Rick Rude no-sell on, then a clothesline to the floor while Kojima mockingly poses. The other guys come in and Norton bowls over Sasaki immediately. Sasaki comes back with a clothesline. Kojima tags in to aid on a double suplex, but Norton won’t sell a clothesline for him until the third one. Nevertheless, Kojima gets taken down on a forearm shot, but backs up into a shot from behind from Bagwell and the nWo single him out. Norton doing an evil cackle as Kojima goes down on a face rake is a nice touch, as is Bagwell having a grounded dropkick as part of his arsenal at this point. Standing dropkick after that and Bagwell goes up to finish. Kind of an awkward splash as he was obviously expecting Kojima to get his knees up and sold it like such. Sasaki comes in and gets a bulldog, then powerslams Norton. Kojima comes back in with a flying elbowdrop. Norton comes in with a powerslam, then gets Kojima up into the powerbomb position for Bagwell to get a sorta flying clothesline on the way down. Kinda went to shit when Kojima messed up that comeback spot, but otherwise a really enjoyable match and Bagwell and Norton were an incredibly underrated team who probably should’ve been together for years and become one of the all time greats, but didn’t. ICHIBAN!

Finishing this week with a big, big match, but coming back with more of the black and white next week. Regal looks out of place here, but was doing a world traveller run as part of a quest to bring the TV title back to prominence. It didn’t work, because he lost it to Prince Iaukea, but at least he took some trips to Japan, Germany and England to try. Takes a few minutes to start rolling before Hashimoto and Chono lock up. Shinya no-sells the Yakuza kick, so Chono no-sells the kicks back and bring Bagwell in. Bagwell wants Mutoh, so they oblige him. Bagwell has so much presence here that it’s a shame that injuries, drugs, stupidity and a combination of all three destroyed his career and left him as the punchline he is now. They go dropkick for dropkick with one another, so Manabu and Tenzan tag in. Takanishi reminds me of a Japanese Barry Darsow. Tenzan gets a Samoan drop and chops away. Manabu gets a clothesline out of the corner and a legdrop for two. Sasaki joins the match, a mega combination of muscles and mullet. He grounds Tenzan for Regal to come in. Tenzan rakes the eyes and brings Norton in. Regal gets to sell a simple shoulderblock in his overblown style, leading Mutoh to return. The heels trap him in the corner for Chono to take over. He just goes straight to the balls, but misses a Yakuza kick and Mutoh gets the handspring elbow and moonsault out of nowhere, but anticipates an invasion from the opponents. Instead, Sasaki runs in and clotheslines him, and Tenzan gets the diving headbutt to eliminate him. No idea what the deal was there, but the other partners don’t act that miffed.

Carrying on, Vicious and Delicious unload with the heavy artillery and nWo Sting comes in for the first time. Laziest of gear, with a pair of Sting’s old black tights with a red and gold scorpion on, nWo shirt and Crow makeup. Not like Jeff Farmer wasn’t a body guy, plus surely he could’ve afforded some nWo-style Sting tights. Chono comes in with his kick to the groin, but I guess the rumour about Japanese guys must be true because Sasaki doesn’t particularly sell it either. Hashimoto tags back in, blocking Tenzan’s chops. Nakanishi doesn’t have the same success with them, but gets Tenzan up in the rack until Norton kicks him in the gut. nWo Sting, showing that you can copy a guy’s gimmick and moves but don’t necessarily have a jot of the presence, gets the bulldog and Stinger Splash like an eighteenth generation quality copy, but does get a nice flying clothesline (I believe from the Thunder and Lightning days) and eliminates Nakanishi.

Regal comes back in and drops a stiff knee on the forehead. Sting reverses a Sasaki suplex attempt, but Sasaki gets the better with a clothesline. Norton tags back in and gets an avalanche in the corner, but goes flying on a clothesline and gets powerslammed for two as a follow-up. Norton gets his own to set up the Buff Blockbuster, but Hashimoto breaks up the sure pinfall. Actually, it looks like it was either a second two late or Sasaki took a bit of a bad knock on it, as he rolls out, leaving it five against two.

Hashimoto comes back in with kicks on Bagwell and Tenzan, who wants more but can’t take it. DDT on Bagwell, and Regal tags back in to take Tenzan, but Chono backs up the latter, leading to Regal almost being eliminated on the diving headbutt. Chono misses a clothesline and goes out after hitting Tenzan, who’s rolled up by Regal to make it four against two. Sting comes back in with elbows, but Hashimoto tags back in and takes down the American heels with kicks. Regal even gets frisky with a dropkick, which leads to eliminating Sting with a butterfly suplex.

The three remaining heels mob Regal with a Yakuza kick, neckbreaker and powerbomb volley, eliminating him. Hashimoto is one against three, as I see Bagwell’s amazingly shit armband tattoo. Chono sets up the STF as the Great Muta returns to ringside! The nWo swarms Hashimoto with attacks, but Chono misses the Yakuza kick and hits Norton. DDT on Bagwell, then spinning heel kick on Norton, followed by a DDT. Weird missed clothesline deal between Norton and Chono. Muta gets up on the apron as Chono calls him out, then he green mists him, but it’s the red mist in a turn against Hashimoto and Norton finishes with the powerbomb. Developed into a very good Survivor Series match, but the angles hurt it rather than helped it. Overall, good. ICHIBAN!

Melting it down: Back next week with one more for the good guys! Optimistic overall based on this showing!