High Energy AND Max Moon! In one match! It’s the most 1992 thing in wrestling!

Here’s an extra Dream Matches column for the week! Mainly because I had an extra couple of Steiners/Fire & Ice matches to post, plus I found this other bizarre one- a rare Genius match from 1992… AND a Max Moon appearance! In the same match! These would be posted MONTHS apart if I did the usual thing, so I give a little extra this week. I also threw in a short Giant/Ice Train match from the same time.

MAX MOON & HIGH ENERGY (Owen Hart & Koko B. Ware) vs. THE GENIUS & THE BEVERLY BROTHERS (Beau & Blake)
(Dec. 7th 1992)
* Wow, now THIS is a weird one. The Genius in a rare 1992 wrestling appearance, along with the short-lived Max Moon teaming up with fellow high-fliers Owen & Koko! The Genius is ultra-pasty in his black jobber trunks. Monsoon jokes about the twelve Hart children before the match, “Stu was certainly busy, wasn’t he?”, cracking up Lord Alfred.

Owen uses speed to harry Beau to start, but he’s caught with a backbreaker. Beau tries another and Owen flips out, backsliding him for two. Small package gets two and Beau headbutts out to escape- Blake gets taken down and Moon keeps using athletic takedowns into a headlock. Monsoon & Hayes diss the outfit, mentioning how hard it must be to move around in that, but he takes both Beverlies over at once with the old headlock/headscissors, then nails the Genius as High Energy empty the ring! Blake beats on Koko once things settle down, but Beau has to save him from a small package, then hits a flying axehandle behind the ref’s back. The Beverlies work Koko over, but the Genius gets tagged in and gets punched almost immediately, sniveling out of the ring so Beau can save him. Koko teases tons of comebacks during an extended beating, but manages a floatover DDT and tags Owen! Owen cleans house, but gets caught in an EPIC snap powerslam by Blake that has both Monsoon and Hayes marking out, but the Genius flails his way in… and Owen tags Max! Genius whirls around in a panic, takes eight shots into the turnbuckle, then eats a roundhouse kick in the other corner! He reverses another whip but Max leaps up and hits him with the flying reverse cross-body… for the three (9:43)! Max pins the Genius!

Hey, heck of a fun match here! The extended beating on Koko was pretty plodding but they hit a couple nice moves (Beau’s butterfly suplex), and the hot tags were all great. The Genius is fantastic as a cartoony little bitch heel, and the faces all had good stuff. Watching this, you’d think the Beverlies were being de-pushed and Max was getting a push, but boy, you’d only be half-right- the Bros jobbed out hard to the Steiners in their debut, but Max left even MORE quickly!

Rating: *** (not a bad TV match at all! Fast-paced for most of it, some good moves by the Beverlies & the faces, and a solid ending) 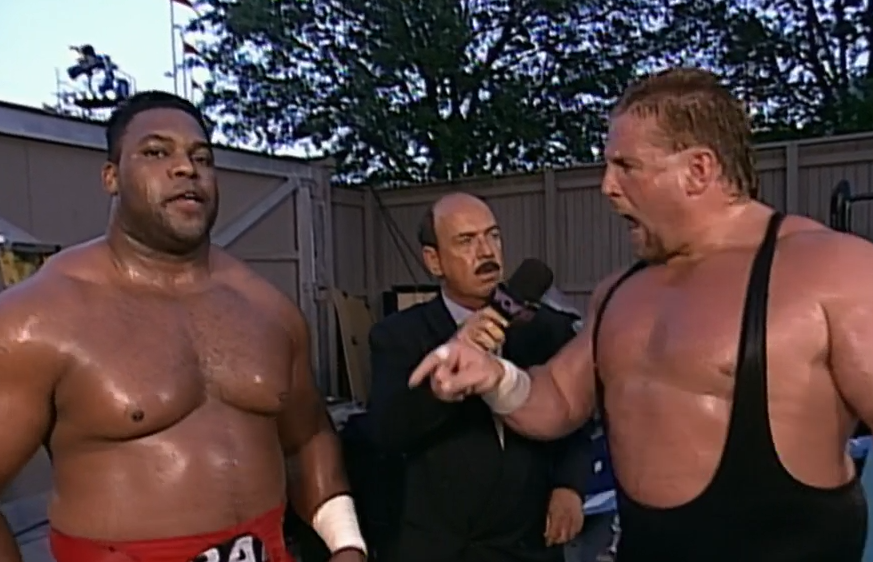 If you’re a Fire & Ice mark, your cup runneth over with this column!

THE STEINER BROTHERS (Rick & Scott Steiner) vs. FIRE & ICE (Scott Norton & Ice Train):
(WCW Saturday Night, 06.08.1996)
* So the teams have a rematch to settle the score from Nitro… except they’re ALSO wrestling at the Great American Bash, which Tony points out on commentary. So why are they wrestling here? Just for fun? Because this was taped before and they forgot to air it yet? Both Scotts have the same gear as last match, but now Rick’s in neon & black, and Ice Train’s in a blue & white bicolor singlet.

Ice Train knocks Scottie down to start, but Scottie nails both guys with hiptosses and Train with a T-Bone Suplex while Rick Germans Norton! Fire & Ice bail to recover, and Norton comes back in and immediately hits a powerbomb on Rick (haha, his first move of the match?). Second-rope clothesline hits, but he misses an avalanche and takes ANOTHER German. Steinerline! But the Flying Bulldog just grazes Norton, Gayda-style, and gets two. Norton clotheslines Scottie and Fire & Ice work the arm- Ice Train catches Scottie with a clothesline and a belly-to-belly for two. Train Wreck (jumping splash)! Rick saves. Train hits a boot and takes a belly-to-belly of his own, but now Norton saves. Overhead belly-to-belly! Norton breaks it up again and we have a donnybrook, ending in another Count Out at (4:20).

Rating: **1/2 (a bit shorter match than the previous one, and not quite as good, but it still has tons of manly power spots and suplexes)

WCW WORLD TITLE:
THE GIANT (w/ Jimmy Hart) vs. ICE TRAIN:
(WCW Nitro, June 6th, 1996)
* Here’s a random match where the Giant takes on Ice Train. Train just keeps HOLLERING his entire way down the aisle- it cuts a good enough image with that gigantic mouth of his (seriously, his mouth has to be twice as large as a normal person’s), but it’s all just random “FEE FI FO FUM!” and “Oh YEAHHHHHH baby!” stuff.

Train shakes with intensity against the Giant, refusing to back down, but Jimmy swipes at his foot from the floor, and the doofus goes for him. So Giant just strolls up, grabs him by the neck, and BAM! Chokeslam finishes at (0:29). Welcome to Squashville, Population: 1. Kind of a misuse of Train, who should at least be putting up a fight at his size, but the Giant had the rocket push on him. Scott Norton comes down and slaps Giant’s shoulder, ranting about how “The match hadn’t even started yet! What are you doin’?”- the Giant is about to shrug and walk away… but changes his mind halfway and just Chokeslams Norton with ease as well. I mean, he makes these two guys look like small children- his aura is helped greatly by the fact that both guys were more squat than tall.

Rating: DUD (damn- I was hoping for SOMETHING, haha)

THE STEINER BROTHERS (Rick & Scott Steiner) vs. FIRE & ICE (Scott Norton & Ice Train):
(WCW Saturday Night, 07.20.1996)
* Okay, this is just weird. The teams DID have their “there must be a winner” match at the Great American Bash, with the Steiners winning. But now a month later they’re just fighting on Saturday Night again. Fire & Ice are in the same gear as last time, but Scott’s now in neon yellow & black, and Rick’s in wavy day-glo & black.

The Scotts start us off, Norton doing his “miss an avalanche and get suplexed” spot, but this time he sandbags WAY too hard and gets dumped on his head from a T-Bone suplex. Yeah, dumbass, that’s why sandbagging is a bad idea. Rick hits a belly-to-belly and immediately tags out, but Norton goes to the eyes on Scott, fighting dirty as Tony talks on commentary about Fire & Ice’s differences in how to win matches. Train hits a clothesline & powerslam off the ropes, but doesn’t cover and Scottie quickly escapes, only for Rick to get hit by the Train Wreck immediately. Only Train doesn’t cover AGAIN, then hits his falling front powerslam… and goes to tag Norton, who’s like “Nah, fuck you” and walks off in disgust. Meanwhile, Tony and Dusty WON’T SHUT THE FUCK UP ABOUT THE nWo on commentary and COMPLETELY ignore all of this angle stuff! Tony doesn’t even notice what’s happened until Norton’s already gone. The Steiners double-suplex Ice Train and a Steinerline gets two. The Doomsday Bulldog finishes him at (3:11).

And that’s it for Fire & Ice- Norton promptly joins the nWo, hammering Train from behind on one of the Nitros I saw around this time. Too bad- they were a perfectly good midcard tag team and lord knows neither guy did anything of value in WCW afterwards. Their stuff wasn’t popular at the time but would definitely get more appreciation in today’s atmosphere (judging by the renaissance in Barbarian & Haku love). But according to a shoot interview I read with Norton, the two weren’t on the same page and just didn’t get along.