Concluding part of a look at the Hulkster in Japan, now after the glory days in the WWF have ended but before his resurgence in WCW, plus a guest appearance from his bionic buddy, brother!

Hulk is the WWF champion for the fifth time, although pretty much taking a leave of absence between WrestleMania and King of the Ring, where he respectively won and lost the title. He burned his WWF bridges during a press conference on this tour in an attempt to win favour with New Japan. I wouldn’t say it worked that well, but I don’t know how much money he was making for these appearances either. Hulk gets an early cross armbreaker, so Muta goes out and plays dead on the ramp for a minute. Realising Hulk isn’t coming he gets up and flips into the ring. Kevin Kelly, on the retrospective commentary track, manages to find a different way to pronounce Fukuoka each time he says it. He comments on Hulk being a lot leaner here, read: not on as much juice. Hulk gets a corner clothesline, but misses a standing clothesline and gets dropkicked out of the ring. Back in, Muta gets the power drive elbow (TM: Jim Ross) for two, but Hogan outwrestles him to the outside. Muta crawls under the ring and comes up from the other side just for the fun of it, because it’s not like it surprises Hogan.

Upon return, Muta chops Hogan out, but Hulk pulls him out and suplexes him on the floor. Of note, as Jim Cornette has mentioned before, Hulk normally does his suplex on the right side, not the left as is normal American tradition. He then does a nasty belly-to-back that folds up Muta. Granted, it’s more Muta’s bumping than Hulk’s delivery, but it’s still an impressive while safe bump. Muta manages to post Hulk in response and sneaks the hammer for the ring bell in for a few shots. Doesn’t really work but looks funny when he hides it in his mouth on the search by the ref, with it sticking out two inches either way. He takes Hulk out and suplexes him on the ramp, then runs up the ramp as far as he can go, then back, and clotheslines Hulk back into the ring in a famous moment. Doesn’t do too much as Hulk kicks and punches him once they’re up. Hogan gets frisky and hits an enzuigiri for two. Muta reverses an Irish whip into the corner and hits the handspring elbow, then executes the backbreaker and moonsault for a near fall. Muta dropkicks him out and then swings off a rope ladder for the lighting rig to knock him into the ringside area. He brings a chair back in with Hogan, but an argument with Tiger Hattori over it lets Hulk get the Axe Bomber. Hulk goes to hit Muta with the chair, but gets sprayed with the green mist. Muta misses a missile dropkick, so Hulk goes to finish with the big legdrop, which gets… two? Big boot and another Axe Bomber gets him the pinfall win on the last go, though. Good match, really more about seeing two big stars facing off than match quality, but Muta did enough crazy stuff to make it fun. ICHIBAN! 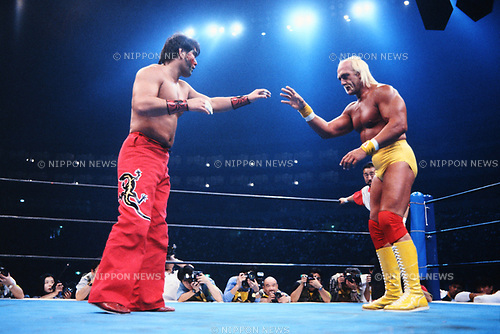 Hulk Hogan and the Great Muta vs. The Hellraisers (Yokohama, Japan, September 23rd, 1993)

For the uninitiated, the Hellraisers are Road Warrior Hawk and Power Warrior (Kensuke Sasaki), with the latter doing a green version of Animal while Animal tried to ride out a Lloyds of London policy with a bad back. I liked it and like Sasaki, because while he was short he was pretty muscular and obviously very powerful. Hulk and Hawk start out, with Hawk taking some rare early bumps in a match off a shoulder tackle. He normally takes his bumps before the match, not during. To make up for it, he press slams Hogan, just about getting him rotated. Hulk shows off his cross armbreaker… Lucky he didn’t show off his figure four(!). Kelly talks about Jimmy Hart possibly producing Hulk’s 1983 Japanese album. He definitely produced his Wrestling Boot Band album, which I might review some time. Sadly, I’ve not been able to find Hulk’s rare single with a B-side that legitimately features the lyrics “Hey! You! You broke off the knob! So don’t you go messing with my thingamabob!”.

Power Warrior comes in with a nice dropkick. Hulk tags in Muta as a response. Red mist display to start, which makes me wonder how many balloons someone can keep in their mouth at one time. Warrior goes for a press slam, but Muta flips out of it and gets some spin kicks and a bulldog and knocks Warrior out of the ring. Warrior will barely go down on a plancha, so clotheslines Muta down on the outside and press slams him back into the ring. Hawk comes in, but gets caught with the handspring elbow. Hulk and Warrior return, with Warrior getting a scorpion on, but not really able to squat all the way down. He ducks an Axe Bomber and clotheslines Hogan down, then gets his powerful powerslam for two. Muta tags back in for a double big boot on Warrior. Warrior cuts off a flurry again with a stiff clothesline. Hawk comes in with his flying fistdrop. He throws Muta outside and drops him on the barrier. Kelly claims that Hogan and Hawk worked together on AWA cards in the eighties, which I’m not sure is actually the case. Power Warrior gets a running powerslam on Muta back inside, with so much force that he ends up next to him when they both land. After a bulldog they set up for a Doomsday Device, but Muta sprays Hawk before he can jump off the top rope with green mist, so Warrior keeps him busy before getting sprayed himself with the red mist, allowing Hulk to come in and finish him off with the Axe Bomber for the pin. Liked this one, mainly on the strength of Sasaki, so next week will be a Hellraisers and Road Warriors feature. ICHIBAN! 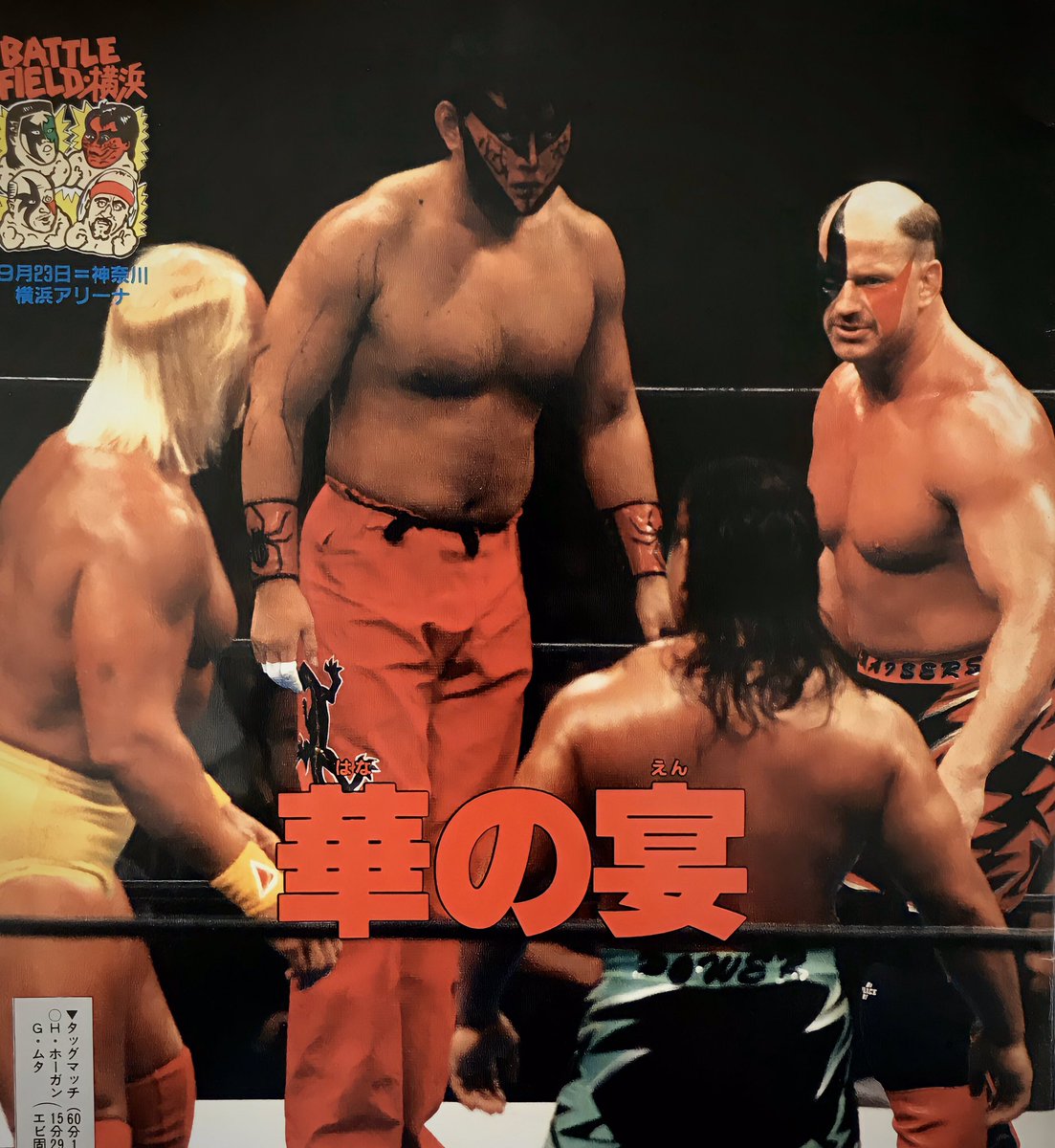 Here’s Brother Bruti, four years after the accident that pretty much killed his career as far as being a serious wrestler, much reduced in ability based on the fact that his face was reconstructed with metal plates. He’s in his Mega Maniacs gear, red and yellow, with Jimmy Hart in a terrible suit with images of the trio on it. Black Cat is a Mexican wrestler who made a few appearances in WCW. He’s actually fairly decent. Brutus chokes him with his knee across his throat while flexing his arms, but with about three double chins showing, to no reaction. There’s a nice bit where he and Cat exchanges slaps and punches, so Cat just left hooks him down. DDT follows for two, then a Boston crab that Brutus will just not go over on. Eventually he does, and lands right next to the ropes for a break. Cat slaps his titties and gets a fair jiggle out of them, but Brutus puts him down with punches and bites him on the face. Asian spike is pulled out as Brutus just seems to be trying any take, whether it’s arrogant heel or maniacal monster. Cat gets him down for a Scorpion deathlock, with Brutus again doing his best to block any turning, leading to Cat falling backwards and giving up. They try a spot where Brutus punches Cat down mid-leapfrog, but the pacing is way off. Crowd is so quiet that Jimmy probably doesn’t even need the megaphone to be heard offering encouragement. Brutus ducks a clothesline off the ropes and hits the high knee for the win. Bad, bad match, with Cat trying, but it all coming up for naught given the slug he was working with at this point. BUST! 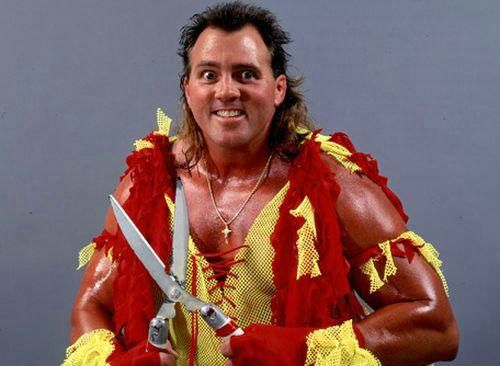 Melting it down: Some fun matches (except for the Beefcake one) with Hulk having something to prove. Helped that he had some strong opponents too.