Based off a suggestion in a previous column, this week I’ll be looking at some NJPW matches featuring Hulk Hogan in the eighties and next week I’ll look at his return in the nineties. I’ve always liked the Hulkster going back to when I was a kid, but even then I could recognise that he had a formula and was only going to do what he always did except for on big occasions like against the Ultimate Warrior, so it was hard to argue with the point of him being limited. However, there was a legend of “Hulk wrestles a lot more in Japan, he does drop toe holds and everything!”, so those matches always had that mythical aura, even if him doing a lot was still a lot less than his peers did. Let’s have a look and see. 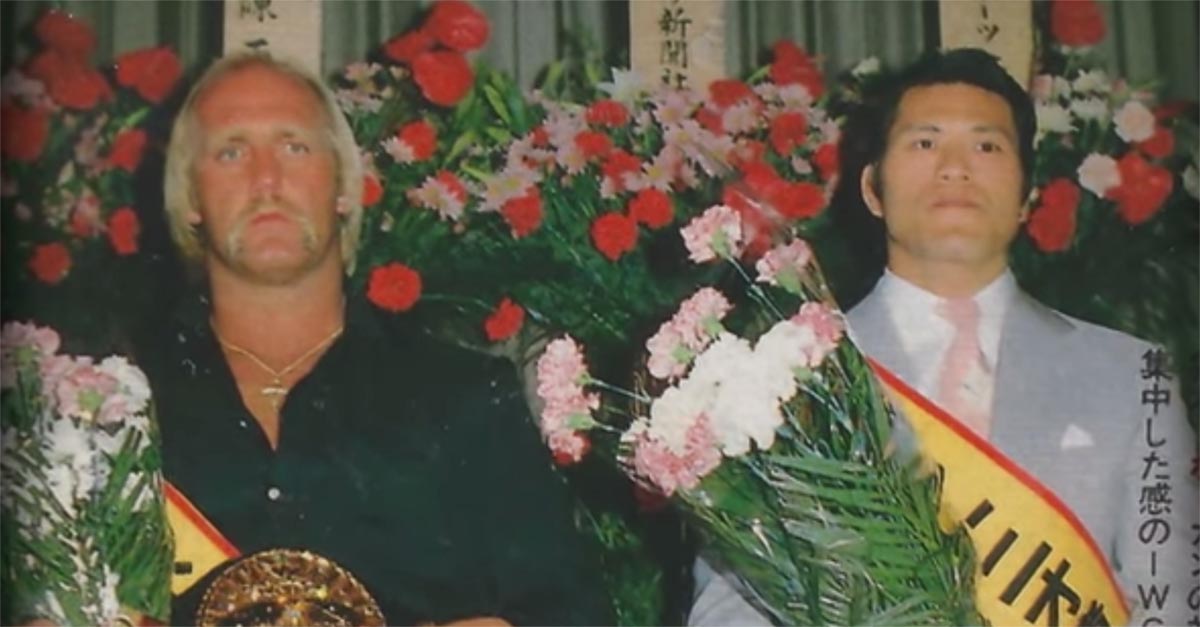 Interesting visual difference between the tall, muscular Hulk and the short, egg-like Abdullah. They charge each other once and twice to a stalemate, so Hulk hits a high knee with a great tree fall bump from Abby for two. Hulk goes for a bearhug with a lift with some great facial selling from Abdullah, but he breaks it with a chop to the throat and knocks Hulk out of the ring. I always liked that his karate pants were labelled A. Butcher, which was actually a shoot deal because he signed up for his association membership as Abdullah T. Butcher. Back in, Abdullah does a Bret Hart bump into the turnbuckle, just about a tenth of the speed and impact, then redeems himself with a great grabbing the air as he falls sell off a clothesline. Hulk then does the terrible bit like the Ultimate Warrior where he goes for a splash but jumps on the knees to demonstrate getting counteracted. Abby decides to change the game and produces a foreign object to open up Hulk’s forehead, and it’s a good one with a bead of blood falling down first and then more running down the chest. Hulk rolls to the outside after more damage to put his blade away, then comes back in and the Butcher goes for a suplex, which isn’t quite as bad as the one I showed that Dick Murdoch executed on him, but it’s dicey. He follows up with the big elbow for two, which Hulk does a mini Hulk Up out of before a series of headbutts are no-sold and he comes back with punches and biting.

Abby opens himself up to match Hulk and they go to the outside and into the crowd, at which point the match is thrown out. Hulk gets a chair at one point as they start heading up the steps and down the steps. Hulk upgrades from a chair to a wooden table and after two shots with that they just try again to choke each other to death. Sakaguchi ultimately separates them and Hulk heads into the ring to declare moral victory, but Abby returns and the tussle continues. I’ll rate it based on the stuff between the bells more, and it was good with Abdullah leading Hulk through the match, but misses out on not having a conclusive finish. It would’ve been nice to see someone like Mr. Fuji bringing the Butcher in to challenge Hulk in 1987 so he could do a few house show loops with him as one of the many unsuccessful monster heel challengers, would’ve been a good if less bloody pairing. ICHIBAN! 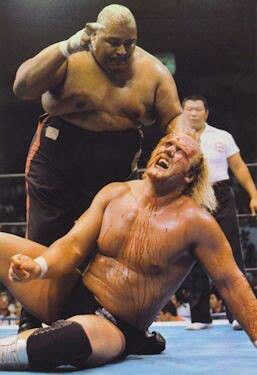 Quite a famous match now, for the IWGP championship. Present day Kevin Kelly adds a little bit of context. Inoki goes for an enzuigiri early during the initial pacing, allowing Hulk to get on top of him on the map, but Inoki reverses to a hammerlock. There comes that famous “Hulk did a” drop toe hold for a reversal back to the STF-like position. Richard Belzer’s favourite hold follows an unsuccessful Boston crab attempt. Good inherent story of Hulk being far more powerful but Inoki being able to outwrestle him. A reversal sees an attempt at the Ric Flair bridge up into a backslide, but Hulk’s too big so Inoki shuffles into a cross armbreaker. Hulk can stand up out of this and gets a cradle for two. Hard to believe despite Kevin’s history lesson that Hulk potentially winning this one would be an upset at the time. Inoki does get an Indian deathlock that he turns into a bow and arrow, but Hulk gets to the ropes. He gets a headlock, but Inoki gets a snug back suplex for two. Hulk tries for a vertical, but Inoki gets his feet back to avoid going up.

Head-to-head test of strength, which Hulk succeeds with, but Inoki gets an impressive bridge with Hulk on top. Body scissors on Hogan, which makes it look like they’re in the missionary position, but it doesn’t last and Inoki gets back up with kicks. Cobra twist (abdominal stretch) from Inoki, which Hulk reverses, then Inoki reverses that into an octopus attempt that goes awry. Back up, Hulk gets some kneelifts and hits the Axe Bomber out of nowhere for two. Inoki comes back up to his feet with a drained but determined look. Back to the mat with an armbar, where I notice that Inoki is great at these little moments of appearing 110% in the match but has little breaks to connect with the crowd. He comes up again and gets some leg kicks in as well as another failed attempt at an enzuigiri, so Hulk drops the elbow, hits a suplex, then drops the leg for… two?! Not the big finisher over here, but Hulk still reacts like it’s the Warrior kicking out seven years later.

Hulk gets dropkicked out of the ring as Kevin Kelly claims he’ll have to drop a house on Inoki to win this one! Back in, side headlock, but Hulk uses the belly-to-back reversal this time. Inoki scoops up Hulk in a fireman’s carry, but they topple over the top rope. Hulk gets the famous Axe Bomber to the back, which leads to Inoki nutting the post, then when he tries to get back up on the apron Hulk hits him with another Axe Bomber from the other side of the ring to knock him off to the floor. This leads to an angle where Hulk gets the win by Inoki not being able to resume the match on account of his throat being injured and him choking on his tongue. Hulk wins the belt as Inoki is unresponsive beyond his tongue protruding from his mouth. Hulk’s initially jumping for joy, but switches to concern when he realises how far it went for him to win. A lot of post-match activity to ensure Inoki is OK with doctors coming out and Hulk not trying to rub it in and become a bad winner. Killer Khan, in his flares, pops by for a look too. While not super exciting now, it’s definitely a match that at the time would be really big and you’d be on the edge of your seat for. ICHIBAN!

The Hulkster is now a year and a half into his initial four year reign as WWF champion and Hulkamania is running wild in the US, although I believe this would be one of the last WWF/New Japan connections for quite a while. Let’s hope it doesn’t turn into a shoot, brother! Beyond the shorter hair, Hulk looks substantially thicker at this point. And Vinnie Mac is here himself to be part of the opening ceremonies on the ring mic! Shinma holds up the belt to the four sides of the ring. Looks like Danny Hodge is the special guest referee as well, just in case that Dragon starts shooting fire, brother! For the uninitiated, one of Hulk’s many bullshit stories through the years is that he was fearful that Fujinami was going to try and shoot on him and take the belt as the WWF/New Japan business relationship started deteriorating, so he was channeling some of that Florida dungeon training, brother!

Hulk has dug out the black trunks and silver boots to continue his famous New Japan look, eschewing the red and yellow. He throws some snug forearms in the corner early on Fujinami, but misses a charging clothesline to the other one and receives some kicks to the thighs. Regaining control, he takes the arm, then a kneebar, before moving into a bow and arrow. Shoulders down, Hodge starts counting them down before Hogan breaks and beefs about it. Don’t put yourself in a vulnerable position, dickhead! Seemingly in tribute to Vince, Hulk shoots the half, but Fujinami gets a nice punch to the gut for the weird fetishists out there and a headlock, but that’s turned into a back suplex. Fujinami receipts that with his own swanky suplex and Hulk heads outside for a breather.

Back in, he gets the armbar again, then transitions into a hammerlock, but Fujinami gets the leg and tries a scorpion deathlock, which Hulk gets a break on from the ropes. Hogan hits a weird Polish hammer off an Irish whip then a powerslam for two. Hulk goes for the Axe Bomber but Fujinami ducks under and gets his own lariat and suplex for two. Hulk holds the ropes on a dropkick attempt and gets a corner clothesline to take him down, with Fujinami effectively playing dead. Slam follows, and you’d think it would be the legdrop next, but it’s a high knee instead for two. One more Axe Bomber attempt is ducked, but they run at each other for a double clothesline and as Hulk is the bigger guy he ends up getting the better of it and gets a three-count victory. Timing was off on it so it looked quite flat and more like a One Man Gang/Ken Patera finish than something someone like Ricky Steamboat or Bret Hart could pull off. That said, after a slow start it got a nice pace going. Hulk, to be a dick, shakes hands with Shinma after the match and pinches his cheek. Dick. Good match, though. ICHIBAN!

Melting it down: Yes, Hulk Hogan does wrestle properly when he’s in Japan! Back next for Hulk’s return in the nineties plus an appearance from his brother!