Continuing to look at the history of gaijin in New Japan with a man who based his character off foreign origins and had massive success in Japan for decades, the Madman from the Sudan, Abdullah the Butcher. Abby, or Larry to his friends, even married a Japanese lady, the daughter of a promoter, and brought her back to the States with him, where they opened up Abdullah the Butcher’s House of Ribs and Chinese Food, with head chef Harry Fujiwara… OK, maybe not.

When I saw that Abby had a match with THE WORST… THE ABSOLUTE WORST I had to look at it! Butcher is seconded by Bad News Allen and Dino has Dick Murdoch with him, proving he’s so bad that only a Klansman will associate with him. Bad News has a tremendous woolen cardigan that his wife must’ve knitted for him. Loud crowd, and it sounds like the audience is laughing at Dino when he’s announced… they knew! Always weird to see Abdullah civilly conversing with the people in his corner rather than acting like a deranged savage. After TEN minutes of non-action, where it’s teased that Captain Redneck will wrestle the Butcher instead (which the crowd sounds far more up for), we finally get started.

Dino fires off the first shot with a lame slap. Abby throws him outside and rams him into the guard rail and Dino actually shows real fire with punches and a trip to the ring post. Back in, it’s back to pantomime punches, although Butcher was bleeding before the match started, so there’s a liberal amount already over Bravo’s chest and face from him. Watch out for the hepatitis, Dino, that’ll kill you before your time! Dino chops Butch down for two then gets the atomic drop in a display of strength, but eschews going for the pin to confront Bad News, who throws what looks like a bag of flour over him under the illusion of salt, bringing about the DQ. The fork comes out so Dino can bleed himself and young boys such as George Takano and Junji Hirata have to break it up. Dino gets back in the ring and yells for someone to “Get the fucking fat son-of-a-bitch back in the ring!” while looking impressive with blood and powder in a damask pattern over his face. Just a shame it had to take fifteen lame minutes to get one good one. BUST! 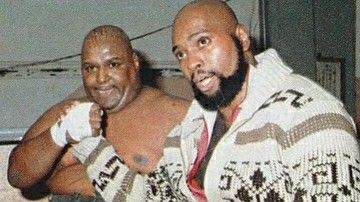 Let’s continue with the match that the crowd wanted to see in the previous one. Murdoch stands out as a guy in wrestling who had objectionable and questionable views on life, but was very much liked and respected by the majority of his peers. Dick avoids chops and counters with his elbow show early on before Abby slips in one to the throat that he does a massive bump off. Nerve hold as we get a shot of Murdoch’s missing top teeth. He breaks with a punch, but Abby kicks him with the pointy toe boots to put him down. There’s an interesting contrast between this match, where you’ll forgive watching so many punches and elbows because at least they look stiff and connect, and the previous one, where there’s so much obvious air between them. Lucha Abby follows, with a trip to the FIRST rope, and a flying headbutt that barely brushes Murdoch and he doesn’t do much to put over.

The high flying portion of his repertoire expended, Abby gets out what looks like a taped drill-bit and busts Dick open with it between hiding it in the sizable waistband of his gi. Murdoch punches him back and knocks it out of his hand, but the referee gets it first and he has to wrangle it off him. In the distraction, Abby gets a Hart Attack-style clothesline for two, but misses the big elbow. This opens him up for the brainbuster, which Dick delivers like a snap suplex and basically drives Abby’s forehead into the mat with, which looked incredibly painful. His finisher ineffective, he just goes to the outside and grabs a chair, which he plasters Abby with. Abdullah doesn’t even bother to block them until the last one. That’s a DQ win for the Butcher just based on how flagrant it was. They brawl to the back after. Far better and daring here. A funny visual in the crowd of both guys sat down next to each other and choking one another. ICHIBAN!

The previous partners are now opponents! I feel bad about not having looked at a match with a Japanese wrestler in for a NJPW column, so as this is a short one I’ll cycle back around and add one. Bad News sneak attacks, but Abby bounces him off and out. Allen is pretty clearly the heel and Abby the crowd favourite here. Bad News searches under the ring for something, not evident what, but a beer bottle comes quickly to hand, so he bludgeons Abby with that and it will not break for effect, so he breaks it on the post to create a sharp weapon and plunges it into Abby’s head. Referee wisely calls for a DQ and has one of the young boys sweep up the broken glass. The guys continue fighting for another three minutes, with Bad News attempting to garrote and punch Abby with a chain. Well, it was only a minute of action, so shouldn’t really earn anything, but when you’ve got a blood feud so severe that you’re beating and cutting a guy with a beer bottle then it has to get SOME credit! ICHIBAN! 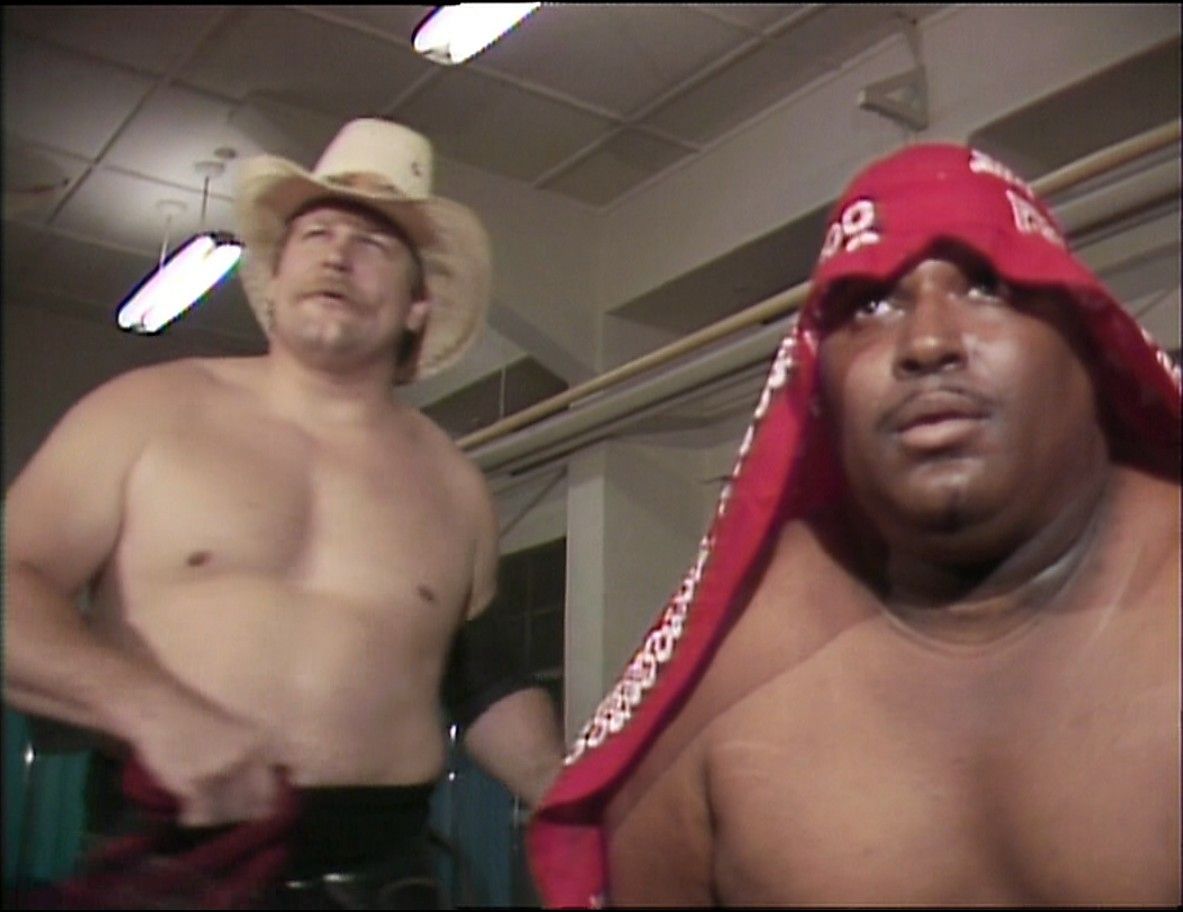 I’ll confess to a very limited knowledge of Yatsu, other than being aware of his amateur credentials and move to the professional ranks, plus the removal of his leg in recent years due to diabetes and that he does the equivalent of YouTube shows where they show his artificial leg as a rocket that he flies with and the like. Hansen tries to attack early with the bullwhip and leather chaps. Inoki threatens to retaliate with his towel and gives Yatsu a strong slap to fire him up. It works because he gets Hansen bumping around for him with armdrags and dropkicks, but Hansen gets his stiff knee in and brings Abdullah in. Abby gets some kicks and a headbutt and throws Yatsu out, allowing Hansen to get his licks in too. Hansen returns as they do their best to keep the young babyface in their corner and dominate him. Good framing of the match as you see him getting beaten on and Inoki in the same shot encouraging him. He ALMOST gets a tag to the crowd’s frustration. Eventually, and not quite as hot as they could achieve, Inoki gets in. It was almost like it was accidental that Yatsu ended up so close, so Inoki had to tag for credibility.

Not much success for Inoki as he comes in, as Abby gets a nasty brainbuster on him and Hansen gets a full power high knee and dropkick in, but Inoki ends up too close to the ropes for a pinfall. Inoki makes his comeback and brings Yatsu in, who seems stuck as far as what to do, so Abdullah gets him back over to his corner and Hansen continues the prior beating right where they left off. It would appear that someone in the crowd is beating a drum, too, which adds an odd feeling to the proceedings, almost like a death knell. Yatsu succumbs to a beating from the heels on the outside and starts bleeding. Inoki wants to save him but the referee blocks. Back in, Hansen has had enough and goes to finish with the lariat, but Inoki breaks up the pinfall, which I believe leads to a disqualification. Hansen decides he’ll give Inoki a taste of that for his rudeness too and throws out another lariat. Kind of a shame for the suddenness of the finish, but it was a great story that they were telling, albeit it with a few errors in it. We then get a few minutes of the young boys trying to get Abdullah off Yatsu, leading Inoki to run Hansen off from blocking him with a beer bottle. but the bottle falls into the hands of Abby and they move their torture from Yatsu to him. Yatsu attempts his own rescue, but gets discarded and Abby drops the elbow on Inoki before calling it time. ICHIBAN!

Melting it down: I like that this is a less limited look at Abdullah, who can be pretty much written off as a blood and guts master, with the Bravo match being a bit of a lame duck but the Murdoch match showing him as quite giving and the Bad News match showing how far the Japanese market was willing to go before finishing with a tag match that used a tried and tested formula that could work anywhere.