Three of the big things I’ve enjoyed in my life are wrestling, cartoons and toy collecting, and it’s nice when the three interconnect. Recently I received Super7’s new figure of Andre the Giant, representing his tour of Japan in 1971. Japanese wrestling has never been something I paid a lot of attention to, so I decided to sign up for a membership to New Japan World to see some of his big matches over there.

This will be an ongoing column where I predominantly focus on the gaijin like Andre who wrestled in NJPW during the seventies, eighties and nineties, maybe even reaching into the new millennium. My rating system will be ICHIBAN! or BUST!, with the former being a pass and the latter being a fail. For the NWF World Heavyweight Championship, Inoki defending. I like the archaic but realistic pre-match promo in the lower left with a fully-dressed Inoki answering questions while the introductions are being made. Very dark arena and video, with you barely able to tell that Andre’s trunks are blue. Weird to see Andre attempting a faster, more even, wrestling style to start. He and Inoki both exchange side headlocks to start, with Andre being the first to throw a punch on a break. We get the strange scene of the much bigger Andre taking Inoki over too. The ref makes Andre break a cravat, leading to them griping, and Inoki dropkicking him over the top rope. Andre gets it back with headbutts, punches and a choke, before switching to a nervehold. Hammerlock, which Inoki tries to break with an impressive flying snapmare, but Andre holds on to it. He tries the same break again, but Andre holds the ropes this time to avoid being flipped forward.

Andre wraps the arm in the ropes and kicks it, leading Inoki to start firing up with his “I’m taking no shit!” look, which actually scares Andre. Inoki throws a few fists but gets caught in the corner and choked. Can’t say that Andre had an ego as heel with how he worked. An awkward collision leads to two dropkicks of average quality trapping the Giant in the ropes. Inoki feigns adding pressure from the opposite ropes, but when Andre charges he moves and sends him over the top for a fall. Back in, he sets up a bow and arrow but can’t turn Andre over. Five points for effort, minus fifty for execution. Indian deathlock is used as an alternative, but Andre gets the ropes for a break. Frank Valois, Andre’s manager, asks for a bit of patience as the Giant gets his legs back on the outside.

Andre returns with a bearhug, but Inoki boxes his ears to break as Andre sells loudly. Andre gets his big boot once, but Inoki sweeps the leg on a second. Inoki to the top, slammed off, but Andre misses a splash and further injures the left knee that’s been worked on, which has a big brace on it already. Andre gets some headbutts in and treads on Inoki’s throat when he’s on the mat, but misses a charge. Inoki goes for a top wristlock and actually climbs Andre to get scissor the arm, taking him down. Andre’s right next to the ropes but strangely doesn’t break and instead crawls over and lifts Inoki up on to his shoulder, then walks him over to the ropes and goes over with him when he tries to dump him. Just imagine it at the slowest, lowest impact speed. Inoki gets back in and the referee calls for the bell. Both guys want to continue to fight, but it’s declared a draw. Disappointing ending, but fun to see Andre wrestling confidently as a heel and Inoki showing charisma as babyface. ICHIBAN! 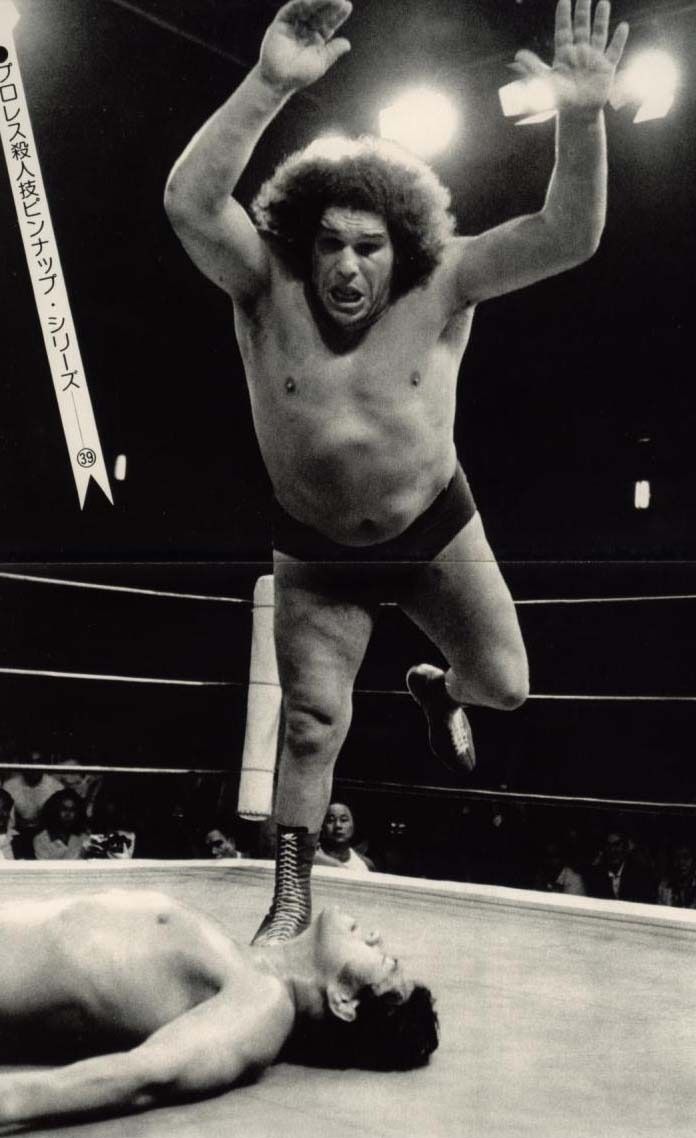 More than a decade later, with Andre in green (which you’d think he would’ve worn more), swigging wine before getting in the ring. I would guess that his manager here, KY Wakamatsu, had the megaphone before Jimmy Hart did. Inoki attacks straight away, taking Andre to his knees with punches and kicks. Andre comes back with a choke and ties Inoki in the corner with some rope, trying to whip the referee with it when he makes him break. Andre won’t go down on the attempted leg trip that follows and gets a rear chinlock before a surfboard with the arms, which he follows down by just sitting on Inoki’s head. Falling headbutt misses, though, to put him down for some stomps. Louder crowd with a much different style of wrestling here.

Andre takes Inoki down and works the leg, but Inoki is able to get the arm in a form of a cross armbreaker. Andre rolls it over to regain the advantage and sends Inoki in for a big boot, but hits the referee as he stretches his arm out for balance, so he’s not there when he drops the ass on Inoki. Andre goes to get the referee, leaving himself open for an enzuigiri that knocks him out of the ring, but Inoki follows and Andre holds on to him to prevent him getting back in. Another fun match, but much different, with it being more fighting than wrestling and a lot shorter (ten minutes compared to twenty minutes) and a louder crowd. Andre probably could’ve done the job on a count out, but it was a different kind of draw here, for heat rather than for protection. ICHIBAN!

Well, Andre wasn’t working with New Japan by the nineties, so let’s finish with the failed attempt to replace him with a giant and the spiritual successor as far as top monster heels go. There was a minor feud going on between them in WCW, but Vader really wasn’t full-time at this point. The mastodon helmet is at ringside, but Vader’s not wearing the jockstrap mask. Fonzie is the ref. Gigante goes for an early slam, which is blocked. Gigante gets him in the corner for some weak shots, so Vader turns it around with some more stiff ones. He backs away for a three point stance that leads to an avalanche. What was that shape supposed to be on the back of Vader’s trunks at this time? The outline of a bull? Vader takes him down from a rear waistlock and gets a splash in for two. Second avalanche attempt sees him walking into Gigante’s boot, triggering Gigante’s early comeback with the claw, his finisher. Break on the ropes, but Vader runs into a clothesline, then gets shoulderblocked out onto the runway. They wander up and Vader gets a couple of body splashes in, but both men get counted out. He then places Gigante over top of the helmet and presses the button for the steam to come out, “blinding” him. They actually continue fighting for a bit, but that clip was used by WCW to write Gigante out of the company. Vader tried, but you didn’t have much to work with here, so it was clear they were cutting their losses. BUST!

Melting it down: Some fun matches with Andre at different stages of his career an early glimpse for the American audience of what Vader was going to turn out to be after several years of oriental success already.