Seeing as all the talk is about this, let’s have a look. 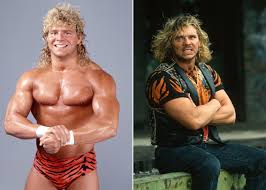 Just to state my position from the start, I think Pillman is one of those guys who had it all. Looks, body, distinctive voice, could talk, a brain in his head, charisma, interesting life story, could wrestle, could brawl, legitimately tough, respected by the right people, pretty boy babyface, sadistic heel, believable… In an ideal world after the Hart Foundation had left town and disbanded he would’ve been the man that Mr. McMahon hired to destroy Steve Austin, because who knew him better and had more reason to want to take him down? Then, after ingratiating himself he would’ve run his own schemes for his greater overall gain, causing havoc throughout the WWF. But, it’s not an ideal world…

Starting off, how can you do better than getting Stone Cold to talk up Pill? He’s the first main speaker, showing off the gold chain that Brian bought him when they became the Hollywood Blonds. It’s one of the rare things he keeps from his wrestling career. He lists off all his qualities, backed up by Jim Ross, and bottom lines it by saying he had “everything”, which is evident even in his early days in Stampede. Corny adds that it helps that he was an exhibitionist. Son Brian Pillman Jr. adds that he never wanted to be known for just having a good look, he wanted to have substance and be good at everything.

Older sister Linda Pillman discusses how vocal chord polyps that kept on regrowing and required removal, leaving him with his raspy voice. Their mom walked into him gasping for air one time, so the family doctor had an ambulance bring him to him and gave him an emergency tracheotomy on the dining room table. This meant he had to show discipline by not talking for weeks on end, making up for it down the road.

Next to be introduced is his mentor Kim Wood, his strength coach, who is basically what Brian would be if he lived into his seventies. Coarse, tough and determined. He instilled a “Kill ’em!” mentality in him when trained him. Pillman was so intense that after an argument at a nightclub one night he dangled a guy off a balcony by his ankles. However, an ankle injury ended his football career, so Kim directed him to “that Hart bunch” in Calgary, where he trained as a wrestler and started out. It wasn’t long until Dave Meltzer (he of the untidy hoarder office) became aware of him and was singing his praises, which brought him to JR’s attention and gave him a chance in WCW.

Ric Flair loved Pillman from the very beginning and it translated to ratings when they wrestled. Pillman fell in love with the high lifestyle, and as a ladies man he started a relationship with a lady called Rochelle, and they had a daughter together called Brittany. It turned out that he had fathered another daughter called Danielle, or Dani for short, from a brief relationship before. She looks like the spitting image of him facially. She was brought into the fold immediately and never neglected, although Rochelle took a hit of a different kind.

Brittany speaks for her mom and how her dad cheated on her many times. She then had a very frightening incident where a groundskeeper at an arena decided to attack her for whatever reason and stabbed her in the face, which obviously traumatized her severely, a recurring theme.

Eric Bischoff joins the conversation to talk about how Brian may have had “everything” but he wasn’t considered a main event talent, and the constant turnover of bookers and management was a big hindrance. Joining up with Austin, who was initially against being part of a tag team as it delayed his US championship push, did give him some elevation less than a year into his heel turn. Austin considers Pillman the architect of the team, with all the ideas for stuff like name and character and appearance. It’s never not weird seeing Steve Austin as Stunning too. However, they were given the blame for a poor Clash rating where they main evented against Flair and Arn, so their split was sped up. Austin, despite his obvious success later, still has no answers on why they made the decision and seems to begrudge it still.

While this was happening, Brian became aware of a “showgirl”, as Linda calls her (meaning stripper), named Melanie, the disgust dripping off her lips. Kim is more straightforward about how he saw her in Penthouse and set his mind on getting with her. Rochelle found out that she was cheating on him in Atlanta while keeping the home with her in Cincinnati. Melanie becoming pregnant with Brian Jr. ended their relationship, leading to a quick marriage to Melanie.

Melanie, pretty much playing the villain of the show, reflects on their wedding day fondly. Needless to say that the years haven’t been kind to her, and the reason isn’t held back by others, it’s because of drugs. She appears to be on something here too. Kim talks about how he appeared to be happy early on, with lots of kids around him (his own, plus Melanie’s two from before). Brittany feels that Melanie was very possessive and resented Rochelle. Linda straight out calls her a troublemaker, and the result was Rochelle disappearing, no-showing a catch-up with Brittany. Brian filed for custody with Melanie’s blessings. Linda puts it down to Brian being able to afford a better lawyer, so he won that one. Melanie now regrets being so heavy with that, as “you shouldn’t try and take away another mother’s child”.

At the time, though, Melanie had filed kidnapping charges when Rochelle turned up for a meeting with Brittany, making Rochelle feel defeated and having lost everything. Melanie told Rochelle during a follow-up call that even her own mother thought she was a better mother. Despondent, Rochelle shot herself and died being airlifted to hospital. Linda, in the absence of Brian, was the first person contacted and had to tell Rochelle’s mother and everyone else that she had died. Out of guilt, Brian paid for the funeral and kept it all together until the casket closed, at which point he broke down to the point of almost passing out in Linda’s arms.

Brittany does feel anger towards her late father, but ultimately blames Melanie. “She’s an evil person and has always been that way. Melanie should never have said those words to my mom. She’s just the devil, and they say you reap what you sow. Now, she’s living a life where she should’ve been dead years ago because of all the drugs, but I feel like she’ll live to a hundred years old and be miserable for all the pain she’s caused me and my brother and my aunt Linda.” Melanie in response says she doesn’t know what to do to make it up to her, but sounds like she’s stopped trying.

Following this, with five kids to look after, Pillman realised the clock was ticking on his career because of injuries, but wasn’t looking likely to make more than he was making at that time, so he went back to Wood for advice. Wood’s advice was to consider raising his value to others by gaining notoriety, even if it was superficially. Shock value was the key, so the Loose Cannon character began to form. Wood reckoned up that he needed to play Eric against Vince, with both wanting him and taking the best offer, although he was also thinking about the long game, so the most money would be the company he ended up with AFTER he accepted that offer.

Early events in the life of the Loose Cannon are gone over, like provoking Bobby Heenan to swear live on the age and his bizarre feud with Kevin Sullivan, breaking the fourth wall by acknowledging him as the booker. He was also working the boys in the locker room and Meltzer, although Wood let the latter in on the deal eventually. Bischoff denies that Pillman worked him into the release that allowed him to go to ECW and the WWF, but they certainly got the result they were after even if he had been conned. He puts it down to Brian being able to raise his value by being a WWF star and coming back. Wood puts it more simply: “If you can fuck someone over and have them think it’s a good idea… That’s the idea of breaking up with a woman – make her think it’s her idea!”

Pillman went to ECW, which was the perfect place for a counterculture character at the time. Austin loved how he carried on in ECW, while Meltzer thought he was losing his mind. Kim Wood laughs at how they did the skit with him causing a scene in a kitchen, plus pulling a mother with a baby in her arms in front of him to protect himself from a shot from Shane. Austin didn’t call him at the time, because he was entertained enough and didn’t need to know the inside story. JR thinks it was a natural extension of his character.

Back to Meltzer, Wood valued him more than Eric or Vince, hence why he got to be let in on the deal. Kim calls the promoters the real marks: “What do you do with a whore? You fuck ’em! That’s what I thought of Vince.” It does make me wonder if they were working Meltzer, though, because they saw him at a trade show and got his credentials so that he could get access to Vince, with the picture still around to prove it. Vince was reticent to take a chance on someone seemingly crazy, but assurances from JR, who says he had balls you could fit in a wheelbarrow, were enough to convince him. Negotiations proceeded and the better offer ended up with the WWF, so he went there. Wood: “It was all about money! It’s the bottom fucking line! Money! And these people are in fantasy land!”

However, man plans and God laughs, as Kim says. Pill made the strange choice of buying an expensive Humvee, which was counter to trying to save money, and that was his undoing, as he rolled it, practically destroying him physically, and that’s used as the point to end on before it picks up for part two.

The Bottom Line: A tremendous insight within the time allowed into the life of Brian Pillman up to the middle of 1996, with the wrestling guys there to ground it in the business, but his incredibly honest daughters and sister there to ground it in reality. Melanie is something of an outlier as she fills the role of obvious villain, and I feel like her beating isn’t quite done yet. Kim Wood is the breakout star of the show, with just line after line of streetwise wisdom to share, a guy who could’ve been a wrestling manager and been a big star. I was really happy to hear this had dropped and can’t wait until next Friday evening to see more.