HIGH VOLTAGE (Rage & Kaos) vs. “THE DESPERADO” JOE GOMEZ & THE RENEGADE:
(WCW Worldwide, 15.12.1996):
* ANOTHER forgotten classic! Gomez was an eternal jobber and Blog running gag, while the Renegade was once a hot newcomer getting a mega-push as a Warrior knockoff… but was so green and shitty that he was promptly de-pushed in the most humiliating manner possible, then turned into a jobber. Which would be hilarious if his story didn’t have the ending it had. Gomez is dressed kinda like a cowboy in black tights, while Renegade has a leather jacket and a choker on, and is wearing yellow trunks. Voltage are in pink & black.

Gomez & Kaos do Power Plant Sequences to start, and Renegade comes in for a double-team and slams both guys. Gomez does wristlocks, but Kaos hits a double-arm suplex into a Rage Slingshot Splash, then stops to hit Renegade. Kaos uses a camel clutch in this short tag match (boy, this IS Worldwide!), and the fans actually CLAP FOR A GOMEZ COMEBACK, and Kaos shoulderblocks Rage by accident for a surprisingly hot tag to Renegade. Heenan actually drops the line on commentary that more people are talking about Roddy Piper vs. Hulk Hogan at Starrcade than Hulk Hogan versus Andre the Giant in 1987, which is astonishing bullshit even for WCW, and Renegade runs wild with punches and clotheslines, somehow looking awkward and clumsy while doing this basic stuff. Cartwheel Ass Attack in the corner! Kaos breaks up the pin at two and gets dumped… allowing Gomez to hit a fucking SIDE SUPLEX for the win (3:42)! Wait- GOMEZ AND RENEGADE WON!?!?! With DINO BRAVO’S finisher?! No wonder he’s a legend!

Rating: 1/4* (almost a total nothing match with the most basic stuff. Rage’s Springboard Splash was cool)

THE BRITISH BULLDOGS (Davey-Boy Smith & Dynamite Kid) vs. THE FANTASTICS (Tommy Rogers & Bobby Fulton):
(All Japan Pro Wrestling, Jan. 14 1990)
* Here’s an actual tag match between the two teams (who wrestled a very long six-man against each other earlier), though it’s rather short. The Bulldogs are in their white tights, while the Fantastics are in mustard-yellow trunks.

We’re joined in progress with Davey-Boy reversing some technical stuff with a delayed vertical suplex on Rogers. Fulton’s in, but Dynamite hits the snap suplex on him with a run-in, and plasters him with headbutts and a lariat in the corner. Rogers works Davey’s leg and takes a running clothesline in the corner, but dodges another and hits a good German Suplex for a pop and a two-count. Fulton hits a running clothesline off Rogers’ back, and a belly-to-belly gets two. Flying sunset flip gets one and they reverse pins off each other for a bit, but Fulton breaks up a surfboard and a Rocket Launcher gets two. Double-facebuster gets two, but Davey Flair-Tosses Rogers off the top, and the Running Powerslam/Flying Headbutt combo pick up the easy win (7:06 of ??? shown).

Quick win for the Bulldogs, but who knows what we missed in the earlier segment? It looked like it might have been going for a while by that point.

Rating: ** (solid short match with some good counter-wrestling, though not very heated and pretty casually-done in the end)

BAM BAM BIGELOW (w/ His Main Squeeze, Luna Vachon) vs. MABEL (w/ Oscar):
(Monday Night RAW, June 20 1994)
* FAT MAN STAND-OFF!!! Mid-tier raw bout with Bam Bam not really having much going on, and he’s fighting Mabel back before he was in singles all the time. I’ve never seen this particular outfit on the big guy- almost ALL purple instead of accented with gold or black like he would later. “WHOOMP there it is” is right on his chest, though.

Mabel pushes Bam Bam into the corner as I marvel at how WWF always seemed to make the giant Bigelow look way smaller than he really was, and he comes back with punches, clubbing and an enzuigiri. Mabel tries no-selling and gets up, but Bam Bam hammers away, then runs into a boot. Mabel hits the TakerBreaker Legdrop to the back of the head (he started running, but literally just sauntered up to complete it, lol). He stops to yell at Luna on the apron, so misses a big elbow. Bam Bam picks him up after like thirty seconds and whips him into the ropes, sending Luna careening off to a BIG reaction, and Mabel hits a pair of clotheslines until Bam Bam hits a Vader Attack, then bails to take care of his main squeeze. Mabel jumps off the apron and nearly crushes poor Luna (who thankfully rolls out of the way)- holy shit, of all the wrestlers you want jumping off the apron onto a woman, that’s probably the last one I’d pick. Mabel eventually rolls back into the ring and Bammer can’t get in- he wins by Count-Out (3:29).

Rating: 1/4* (really nothing to it besides big fat guys hitting each other- that’s worth a quarter-star, but that’s as generous as I can be)

BATISTA MUST WIN TO EVER GET A TITLE SHOT; VICKIE GUERRERO CHOOSES BATISTA’S PARTNERS:
BATISTA, COLIN DELANEY, FUNAKI & NUNZIO vs. EDGE, ZACK RYDER, CURT HAWKINS & CHAVO GUERRERO:
(WWF SmackDown, 2007)
* This comes from another era of wrestling I wasn’t watching, as Edge was the top heel of SmackDown, dating Vickie Guerrero (I think) and forming his own stable out of two rookie putzes and Chavo. I was watching so little at this point that I’ve never seen Hawkins before- he’s another Johnny Ace Template cookie-cutter dude. Batista’s partners are chosen by Vickie, so hilariously he’s teamed up with the three bottom-tier guys just to make this very one-sided, as Funaki & Nunzio had little credibility but seemed to be well-liked backstage or something. I’m not even sure I’ve ever heard of Delaney. He only lasted a single year, and has pretty well been a jobber to this day, even doing so on AEW Dark! He’s a pasty, skinny pile of bones. Batista looks like he’s aged about 15 years between his 2002 debut and here- don’t do steroids, kids.

Batista’s reactions to who his tag partners are are classic, and show why he made it as an actor, too. Edge’s “No, hey, LOOK! These are good partners!” expression is great, as well. Batista easily handles Ryder & Chavo, then throws Delaney for a rocket launcher- Delaney’s “scamper across the ring on his knees to get a pin” thing is pretty good character work. We take a break and come back with Delaney getting wiped out by La Familia slowly beating him down. Edge toys with the kid and teases letting him tag out with this “Awwww” face, then slugs Batista and forces a tag to Funaki, who gets some shine but quickly eats a big boot. Funaki gets triple-teamed and repeatedly hammered, cutting off his comebacks. Hawkins misses a charge and Batista FINALLY gets back in. Lariat City & a spinebuster, but Edge stops the DAVEbomb. The jobbers run in to fight La Familia and all get killed, but as Edge spears Delaney, Batista double-spears Chavo & Hawkins, Edge walks into a spinebuster, and Hawkins comes off the top and gets caught in the DAVEbomb at (10:12).

Man even more “Punch & Kick”, back when the majority of the roster seemed to ONLY do punching & kicking. Then Batista does his “Main Event Style” stuff and cleans up. At least that part came off well

Rating: *1/2 (just kind of errant Main Event PunchanKick aside from the ending stretch) 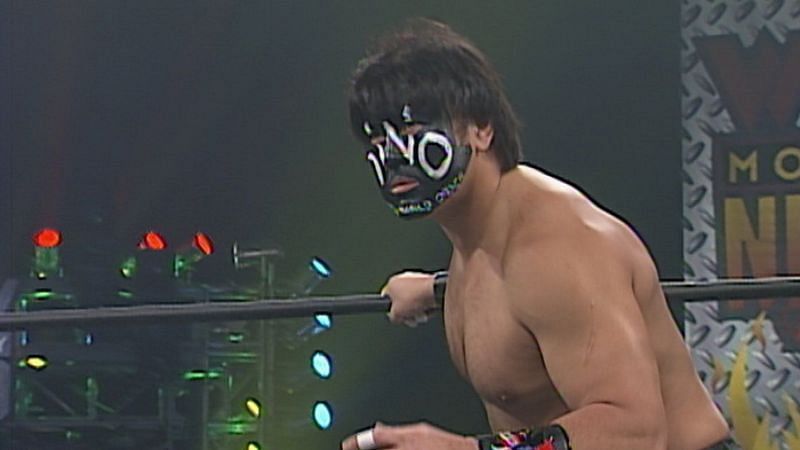 Muta in his nWo look.

THE GREAT MUTA & MASAHIRO CHONO vs. EL DANDY & DAMIAN:
(WCW Worldwide, 28.09.1997)
* Yes, that’s actually two of New Japan’s biggest stars, then nWo wrestlers, fighting some jobbers on a D-tier WCW show. They had these dudes and THIS is the best WCW could do with them. Then sent nWo Sting & Michael Wallstreet to work NJPW dates. Dandy’s in his blue Jobber Singlet, Damian in a black shirt & pants with green on them (and no facepaint, which isn’t a look I’ve seen on him before), Chono in the long tights and Muta with black facepaint with “nWo” written in white.

The nWo jump the luchadores to start and heel it up, but they actually get beaten up and chased off when they hit the ring! Chono runs into Dandy’s head (was that supposed to be a sunset flip?) and then takes a neckvice, but Chono goes to the eyes and Muta adds the Muta Elbow. Muta chokes away on Dandy, who backs him into the corner, but Damian gets dumped and beaten down by Chono. He’s sent into the post and Muta hits a sleeper, but Chono eats a weak double-clothesline. A jumping one takes out Muta and this is hilarious watching these two megastars sell for a pair of nobodies, but Damian cannonballs Dandy by mistake- Handspring Elbow! Whip into a Yakuza Kick! Muta Elbow! STF! Hot damn, what a move series- it’s over at (4:29).

This was mostly the luchadores doing stuff with the occasional bit of lazy heeling by a pair of dudes who knew they weren’t gonna have to work hard, but once they just started blitzing Damian it was pretty cool.

Rating: 1/2* (mostly for the moves at the end- now THAT is how you kick someone’s ass!)