And we’re back with more of wrestling’s weirdest side-matches. This time some stuff Maffew showed me- possibly the greatest disparate bunch of dudes ever, all from a one-night tag tournament in Tenryu’s WAR promotion in Japan! Even better, there’s Buddy Rogers vs. Haystacks Calhoun from 1961, and Antonio Inoki versus the famous “Fat Motorcycle Twins”.

KOJI KITAO & EL GIGANTE vs. TYPHOON & THE GREAT SHINJA:
(One-Night Tag Tournament, Wrestle Association R, Japan, 12.08.1995)
* Maffew got this one for me, so you can blame him, lol. Gigante you know as the most hopeless wrestler ever; Kitao is infamous for the 1991 match where he & Earthquake shot on each other, and was a failed yokozuna-level sumo (promoted just to “have a native Sumo at the top level”), retiring in disgrace after never having won a tournament and feuding with his stable bosses (sumo is dirty as FUCK, though). Typhoon is from the WWF, and… Earthquake’s partner, so that’ll be interesting. The Great Shinja is Akio Sato of the Orient Express (in the shittier original version), and was also Hakushi’s manager Shinja in the WWF. Gigante’s in red shorts, Kitao’s in a white gi, Typhoon’s in his WWF gear (and pretty much exactly the same size as Kitao), and Shinja’s in a white shirt & pants that just make him look like someone’s dad who just wandered into the ring.

And yes, this is actually a full tournament, so in addition to having these awful workers in it, it’s going to have them HALF-ASSING IT, because they have to work again!

Sato does goofy selling against Gigante and we’re clipped (with an idol saying “Goddess bless pro wrestling”- I like the intent, but pick which matches you’re gonna bless, ya know?) to Kitao & Typhoon, who is only too happy to sell for Kitao’s karate kicks- worried about a repeat of Quake’s bout? They hit the mat for a jujigatame spot (if I had to guess the things I’d see this week, “Fred Ottman doing MMA spots” would not be among them), but Dad Shinja runs in and lets Typhoon hit the avalanche in the corner. Shinja does punches, but gets Flair Tossed off the top and kicked, running away so Typhoon eats more kicks and a backdrop.

Kitao chases Shinja away again, so Typhoon hits the wimpiest, loosest clothesline ever and does a backdrop suplex. Tidal Wave (running splash) misses and Kitao hits a side kick. Shinja kicks him in the balls to stop a crab, and in comes GIGANTE, so Shinja makes like Gedo and just drills him with a chair outside and fights as dirty as possible. Gigante eventually just fends him off (I mean, Lance Storm would be shamed by those chair-shots), but still “sells” the leg- you can tell he’s selling because he’s just standing their, swaying like he has a tic. Kitao levels his opponents with more side kicks in the ring, but can’t get Gigante back in, so Typhoon & Shinja actually win by COUNT-OUT (4:02 of 7:40 shown). Holy shit, what a BS finish.

This was almost as dreadful as you might expect, with Typhoon doing the lightest shit possible like he was afraid Kitao would kill him if he felt the slightest thing, yet went down for everything like a total jobber. I mean, Typhoon is a big fuckin’ dude, and he’s selling these side kicks like fatal wounds, dropping to every single one. And yet he was the team workhorse, as Shinja did literally nothing you wouldn’t see from a WWF manager, looking about as effective as Slick or Mr. Fuji. Gotta love the psychology, though- if one of your opponents is an immobile post, you wait till he’s out of the ring and disable the leg.

Rating: DUD (Typhoon sold well I guess, but wow this was bad)

GENICHIRO TENRYU & ULTIMO DRAGON vs. TYPHOON & THE GREAT SHINJA:
(One-Night Tag Tournament, Wrestle Association R, Japan, 12.08.1995)
* YES IT’S THE SAME SHOW!! Tenryu & Ultimo were the Aces of the Heavyweight & Junior divisions in WAR, so I’d imagine they’re heavy tournament favorites- this explains Kitao going out to bullshit, as he was another mega-star, and was now protected from jobbing to the boss. Ultimo against these two opponents is a hell of a disparity in styles. Tenryu is a Japanese Dad Wrestler, but seriously solid as hell and a megastar over there.

Tenryu & Shinja chop each other’s dad bods, then Tenryu fires off an absolute GUNSHOT to Typhoon, echoing through the arena! Typhoon no-sells a shoulderblock and slams him. Shinja does light chairshots outside, and we’re clipped to the pairing I was born to watch, TYPHOON/ULTIMO!! Ultimo tries a shoulderblock like an imbecile (I mean, seriously- Typhoon outweighs him by more than double, legitimately), but shakes it off by backflipping off the ropes to applause. Before Typhoon can try to top that, they go to a test of strength, Typhoon holding his hands too high, so Ultimo climbs up the turnbuckles and taunts him into trying it there- Typhoon tosses him off the top, but misses an elbow, launches Ultimo off when he tries a lateral press, then catches him when Ultimo does a Tiger Feint & Pescado and hits a Backbreaker. Ultimo uses an Irish whip to hit a slingshot dropkick on Shinja and rolls away from Typhoon to tag out.

Tenryu hits enzuigiris and finally lariats the big man down, but we’re clipped to Shinja working over Ultimo with boring WWF-style offense (backdrops, neckbreaker, stomps), and Typhoon adds a huge vertical suplex and just casually hoists him repeatedly for an extended backbreaker spot, drawing laughter from the fans. Shinja adds a standing side kick, but pulls him up at two- Flying Kneedrop gets two. Typhoon steps on him and Shinja’s Ligerbomb gets two, but Ultimo whips him off the ropes and into Tenryu’s enzuigiri, allowing him to hit a snap Hurricanrana for the three (7:52 of 12:09)! Shinja’s so bad he actually fucked up the finish, not getting his legs up so Ultimo could hook them, leaving the poor guy scrambling and reaching back with zero leverage on the pin. Typhoon & Tenryu brawl, and Shinja throws fire at his tummy to end things, leaving their match against Gedo & Jado in question! Ultimo/Tenryu would ultimately win that one, too.

They cut a bunch of time from it, but Typhoon was actually a solid bullying heel here, laughing off Ultimo’s offense and easily hoisting him around and doing Big Power Guy spots. Tenryu just HAMMERED him with stiff shots, which Typhoon actually powered through in an interesting contrast to his stuff against Kitao.

Rating: ** (actually not bad for what we saw, but Shinja is awful and the finish was out of nowhere)

NWA WORLD HEAVYWEIGHT TITLE:
“NATURE BOY” BUDDY ROGERS (w/ Bob Davis) vs. HAYSTACKS CALHOUN:
(14.04.1961)
* Some black & white wrestling for y’all! Arkansas-born Haystacks is billed at 601 lbs. and is a biiiiiiiiig rotund guy with an Amish beard and coveralls like a big hillbilly. Not the same guy as the British legend Giant Haystacks, who was also fat. Rogers is of course the original Nature Boy, a bleach-blonde jackass arrogant douche. Russ Davis is the announcer from the International Ampitheater in Chicago, and I’ll be damned if he isn’t every nature documentary narrator I’ve ever heard as a kid. I’ve heard him narrate Gorgeous George matches and he’s hilarious to listen to.

They lock up to start, and they play up a headlock spot as a major deal because it’s the ’60s, with Russ Davis cracking up when Buddy tries to toss him out of it, but gets “dragged along for the ride”. Buddy keeps going for the hair like a good heel, hiding it from the ref (“This guy’s neck’s so big Buddy can’t even choke ‘im”). The crowd mic announces that the Chicago Blackhawks have scored against the Red Wings and the crowd cheers- oh, old-timey stuff. Buddy stomps the foot and grabs a chinlock. “Buddy gets mad at the crowd- calls ’em a house of paying referees” sez Davis. Calhoun goes to the hair as Russ questions whether or not Calhoun has a “coh-less-ter-awl” problem (“I certainly think SO…”). Blackhawks 5, Detroit 3!

Haystacks punches his way out of the chinlock and Buddy sells each shot with an exaggerated leap, and goes to the eyes to reverse a hammerlock. But Haystacks pays him back with an eyepoke of his own, then Buddy bounces off of him a few times (“Shoo, fly, shoo!”)! Bodyslam! Buddy wails in agony and Haystacks just SITS on him, so Buddy hooks the ropes with his leg to get out of it. Haystacks steps on ‘im in the ropes and squashes him in the corner repeatedly- BIG splash, but Buddy’s in the ropes again. Buddy begs off, but gets slugged and ends up in a bearhug! Thumb to the eyes saves a desperate Rogers, and BAM! Two dropkicks send Haystacks out of the ring, breaking the middle rope in a HUGE bump, and he’s Counted Out at (9:32)! The arena security (with old-timey caps!) have to try and help Haystacks, said to be “bleedin’ like a fountain”.

Ancient wrestling stuff generally isn’t my bag, but I love the cadence of the commentator just doing casual conversation, and Rogers was sure to do almost nothing but sell for the giant and only look like he cheated and lucked his way to victory. Haystacks took a great bump and holy shit did the crowd move out of his way fast when he came a-tumbling down, though.

Rating: * (fun bumps for Buddy, but a match based off of a headlock and a chinlock) 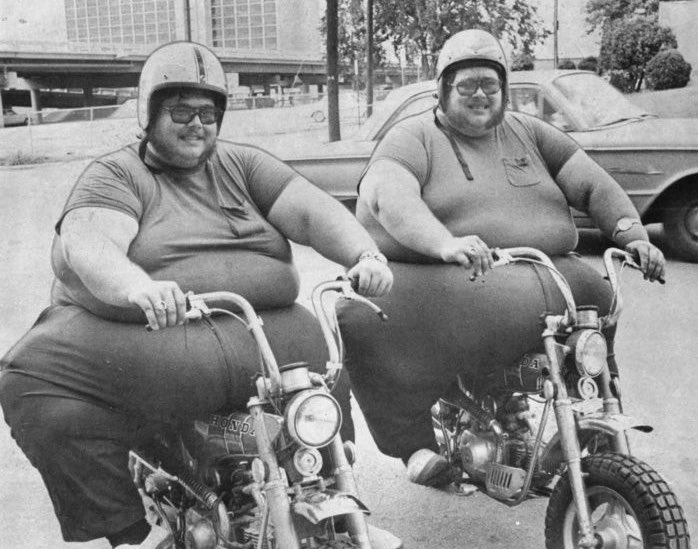 ANTONIO INOKI vs. THE MCGUIRE TWINS (Billy & Benny McGuire):
(Japan, 1974)
* Yes, these are the infamous “Fat Motorcycle Twins”, who indeed became pro wrestlers. Each over seven-hundred pounds, they both look far more unhealthy than Yokozuna- they’re that “wobbly, under-gut fat hanging over the crotch” kind of fat. This is only a couple minutes long, and I’d imagine just a fun freakshow match for the crowd.

Inoki charges but immediately eats a double-avalanche (not much momentum, but still… 1400 lbs…). We’re heavily clipped as Inoki punches away, then tries a flying headscissors like an absolute idiot and gets carried to the ropes and dumped like a sack of garbage. One twin holds him in a bodyslam position and the other just runs in and they skoosh him- one twin follows up with the TUPELO SPLASH (a running splash; named as such on their Wikipedia page)- Inoki’s foot’s in the ropes. One twins holds him, but Inoki pushes off the other one with his feet and knocks them BOTH down, ties one in the ropes Andre-style, and comes off with the Flying Knee at (1:35).

Rating: 1/4* (nothing match, and the twins are the clumsiest men this side of Giant Gonzalez, but Inoki actually fought smart and used his speed in a fun way. Good freakshow match!)