This is like what happens when you hit “Random” in Fire Pro.

RANDOM DREAM MATCHES:
* So randomly searching YouTube for stuff, I found some true gems and some weird stuff, and decided to make a thing of it. This first one is just BONKERS and it got a great reaction when I posted it in the live thread a week back, so I had to share it here. Some are ironic “LOLWTF THOSE guys wrestled!?!” while others are legitimately good. A few of these are WWF & WCW matches posted on YouTube, so I won’t post them here (it demonetizes the blog or somesuch thing), but they’re easy to find.

ANDRE THE GIANT, EL CANEK & VILLANO III vs. KOKINA MAXIMUS, BUFFALO ALLEN & BLACK SCORPIO:
(Universal Wrestling Association, Mexico, 03.05.1992)
* Yes, it’s YOKOZUNA, BAD NEWS BROWN & 2 COLD SCORPIO! Fighting ANDRE, plus Mexican legend El Canek (one of the few guys to slam Andre) and Villaino III (elder brother of IV & V). This is like what happens if you hit “Random” in Fire Pro to make your teams- Andre dressed in a red singlet teaming up with fighting Yokozuna, Bad News Brown and 2 Cold Scorpio! Andre is BEYOND washed up at this point, while Yoko is almost ready for his WWF run, being not quite as fat as he’d be in his 450-lb. debut. Andre’s in a red singlet, Canek’s in white, and Villano’s in blue. Kokina’s in black trunks, Allen’s in his usual black, and Scorpio is wearing a yellow mask and long tights- he’s got a great physique here, too.

Fall Uno: Andre, looking MASSIVELY fat, leans against the ropes while Canek literally forces Kokina to headbutt him, dropping him (only Andre can defeat Samoan forehead invincibility!), then he slowly chops Allen, who bounces all the way across the ring. The heels bail, but Andre drags Kokina back in and headbutts him, leaving him confusedly headbutting the ring pole. Canek takes a beating out there while Allen threatens furious Mexican moms, and now Villano takes a ponderous pounding in the ring. He bails (which counts as a tag in Mexico) & Canek fights Kokina, who bumps like nuts for a dropkick- he avoids a double-team and press-slams Scorpio. Andre does a lazy double-arm submission that serves the purpose of showing the ENORMOUS size difference between the two men, scarcely looking like the same species. A triple-team sees Andre staggered by Kokina getting whipped into him, then a Ghetto Blaster (to the front) earns his signature “tied in the ropes” spot. The others get thrown into his exposed stomach (which is sold as painful to both parties), and Kokina’s ass avalanche leads to Scopio’s 450 Splash, finishing Villano III at (8:11). That is a HELL of a combination move. MONSTER Splash finishes El Canek at (8:36).

Fall Secundo: I guess that counts as a full fall, because it’s “Secundo” now. Andre easily overpowers Allen, who sells like a champ, leading to Scorpio missing and getting double-skooshed in the corner, and then KOKINA misses and hits his partners, because 1992 Andre is just too nimble. Canek press-slams Scorpio onto Kokina, and Andre sits on them for the fall (10:25), then Villano’s DDT on Allen gets him (10:37).

Fall Tercera: Andre literally sits on Allen while he’s hunched over, thankfully not shitting on him (that’s a different match), then Scorpio flips & flies to make Villano seem like an old man by contrast. Canek gets his foot caught but boots Scorpio, but the heels team up on him until Andre saves with a megaton punch to Allen. Kokina headbutts Villano’s balls, and that’s a disqualification around (14:30) to let the babyfaces win.

This match had “WTF?” written all over it, with the most preposterous teams imaginable- a “Legend Team” up against these wildly disparate guys. Allen’s only job in there seemed to be “sell every Andre punch like it came out of a cannon”, as he’s Flair Flopping and being launched across the ring with the slightest graze. Scorpio did some flashy stuff, and I loved him & Kokina as a duo, oddly- great contrasts to each other. That Avalanche/450 combo looked like DEATH. Andre was pretty sad to watch but was handled perfectly, as he’s slow but forceful, and a 6-man uses him properly. And where else can you see Andre fight Yokozuna?

RON SIMMONS vs. THE SAMOAN COQUINE:
(Universal Wrestling Federation, 09.05.1987)
* Haha, it’s 1987 Ron Simmons versus the future YOKOZUNA, Rodney Anoa’i- Tprincess shared this in the same live thread, owing to Anoai’s svelteness and incredible ring-speed here. He looks somewhere between Makin’ A Difference Fatu and The Sultan in terms of obesity. He’s got a big Maui-style mop of wild hair and his Yoko-style trunks, but with a Samoan cloth wrapped around him. But HOLY SHIT, Simmons’s physique. That dude was put together.

Coquine attacks right away with headbutts and running stuff, moving 3x the speed of his Yoko days, but he misses an elbow and Ron takes over. This is going to shock you, but Jim Ross is talking about his football career right now. Ron whips Coquine, who just LAUNCHES himself into the ropes and comes flying off with incredible speed, and Ron hits an elbow and a BIG body slam, then hops to the second rope and hits a shoulder tackle (called a Flying Headbutt by Ross), doing a push-up pose on Coquine for the three count (0:59).

God damn- Coquine moved with CRAZY speed here, and if I’m booker, I’m giving BOTH of them pushes, but it’s just a standard jobber match with a tiny bit of shine to start. The use of 350-ish lb. guys as jobbers is always kinda funny to me. If Yoko had stuck to this size or 450-ish, he might still be alive and have had a much longer career, but he nor his bosses took the care into his health and he just ballooned and ballooned until he was gone.

Rating: 1/4* (short as hell but every move the guys did looked great) 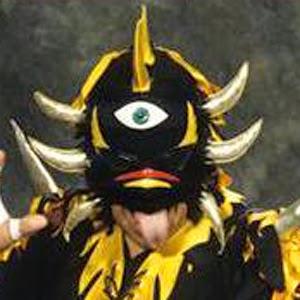 THE FACES OF FEAR (Meng & The Barbarian, w/ Jimmy Hart) vs. CICLOPE & GALAXY:
(WCW Saturday Night, 23.11.1996)
* One of my WCW guilty pleasures is Luchadores randomly mixed with guys from totally different eras of wrestling. So we have the Faces of Fear in the midst of their “doing whatever” Hoss run (that never quite ended) versus the guy most famous for Dean Malenko disguising himself as the guy to get a shot at Chris Jericho in one of WCW’s greatest moments… and Damian 666 in a generic black mask. Ciclope here has one of the wildest costumes I’ve ever seen, looking like something out of a Japanese Indie Sleaze fed, while Galaxy’s in the plainest “I just bought a longsleeve & pants with a red overshirt” look I’ve ever seen in wrestling. That costume looks like something out of Way of the Warrior– like it cost five bucks or something.

Galaxy plays keepaway on Meng, leading to Ciclope sneaking in with a missile dropkick, bringing the big man to his knees! And then… it just turns into two guys fighting one for two whole minutes, as they continually pound away on first Meng, then the Barbarian. Humorously, Barbarian makes his own comeback by hitting a double clothesline. Galaxy’s crushed in the corner and eats a backbreaker, then Meng slowly beats his ass with methodical offense. Barbarian’s press slam kills him, and a lariat & double-headbutt keep up the punishment until he slips away from Meng and Ciclope gets some action. Cross-body out of the corner gets a one and he throws some chops, but that’s that- Meng backdrops him into the Barbarian, who hauls him up and Powerbombs him at (4:19). Killer finish and a complete slaughter- they kept pulling Galaxy up at 1 and 2-counts, and finished his partner after only one move.

Rating: ** (Mostly plodding and the big boys just “Road Warriors”-ing the match, but looked like a fun ass-kicking)

PWI Rookie of the Year to the “Rick Fuller Division” of WCW. 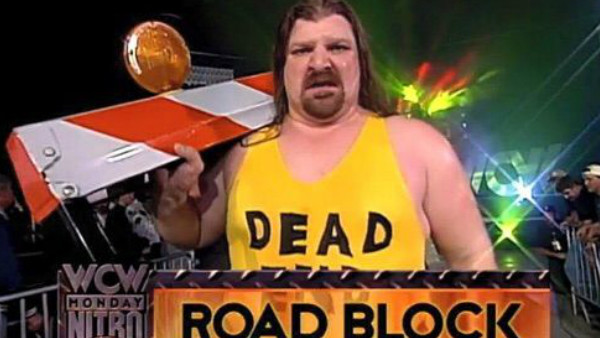 Roadblock- 6’8″ 350 lbs. and carries a road sign to the ring, yet remains completely forgettable.

TOMBSTONE vs. ROADBLOCK:
(WCW Saturday Night, 15.02.1997)
* Holy shit, it’s 911 from ECW, and up against WCW’s jobber super-heavyweight, Roadblock! Both guys are total washouts from wrestling, despite their size, as 911 was mostly over for his gimmick of chokeslamming everyone in ECW (which got him IMMENSELY popular there, mind you), but left over a dispute with Paul Heyman and turned into a JTTS in WCW for a few years, and Roadblock was only in wrestling for a few years before mostly retiring in 1999. I remember 911 being billed as huge, but he’s noticeably a couple inches shorter than Roadblock here, and much more slender (though he’s wearing the classic “I’m not actually in shape” wrestling shirt). Neither guy shows any kind of charisma on the way to the ring, Roadblock just frowning (wearing an orange shirt with “Road Closed” on it and carrying a literal roadblock) and Tombstone kind of just… stoically walking like he has nowhere better to be. Yeah, I’m seeing why both these guys washed out of the business.

Roadblock literally turns his back on Tombstone and gets decked, so Tombstone uses an avalanche and short clothesline. His next Irish whip is reversed and now HE’S clotheslined- Tombstone tries to fight back, but misses another avalanche and Roadblock casually picks him up and slams him down with a weak Powerslam… and that’s the finish (1:07)! Hahahaha, jesus christ- they hired a 6’8″-billed guy hot from ECW and jobbed him out in A FREAKING MINUTE to a guy like Roadblock on their secondary show? Schiavone & Dusty never even stopped talking about Hogan & Piper! Like, make him a bodyguard to Disco Inferno or something if he can’t wrestle! This freaking company…

These random “Not Dream Matches” are tremendous fun finds for me, and I can’t tell if that’s weird or not, lol. Hopefully people enjoy these, as I have a few more in mind at least.