I’ve always been somewhat intrigued by what wrestling stars did when they were between gigs. For instance, as much as Jim Cornette has talked about lots of other things, his time between leaving WCW and starting SMW is pretty much unspoken for beyond his LPWA commentary gigs and independent shows for Bobby Fulton.

I became a wrestling fan in 1991 properly, so I was vaguely aware of Ravishing Rick Rude but he was out of the WWF by the time I properly knew him. My first exposure to him was really in the pages of Pro Wrestling Illustrated, where his bizarre for feud in IWCCW with fellow recent WWF departee the Honky Tonk Man was getting some coverage, as well as a short-lived Rude Awakening hotline was being advertised.

So, today I’m going to have a look at some of the things he was doing in his independent year between his big WWF run and his return to WCW as the Halloween Phantom. (That picture says a thousand words.)

I’ve not really had anything of interest to review lately alongside being busy, but have seen clips of this on YouTube and while it may end up being a load of bullshit it at least looks to be entertaining bullshit and clocks in at just over an hour.

Filmed in Las Vegas at the Hammer’s place in the last few weeks for Title Match Wrestling. 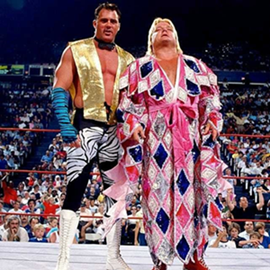 More Saturday Night, with some “before he was gone” matches featuring the biggest star in wrestling of the nineties.

I was recently reminded of a lost classic match on this show, and it’s not like Scott will be rushing to review an episode of Thunder any time, so I’ve bitten the bullet on this. Although I was on the internet by this point, which was prompting me more than ever to skip certain shows and just read the reports, I did watch this one without any prior knowledge and was in for a pleasant surprise.

Just thought I’d share this, a collection of pre-match promos from the World of Sport era.

British wrestlers – great wrestlers? Yes. Great talkers? Not so much…

Thankfully Mighty John Quinn, Gorgeous George and Giant Haystacks hold it together well, but among the worst are Neil Sands, Kid McCoy and Ray Steele.

Back again with more WCW Saturday Night from the nineties, featuring probably one of the few guys who was there from the change from NWA to WCW until the very end.

And last week I posted the review in the evening before I went to bed, but that doesn’t necessarily equate to Saturday night everywhere, so read it whenever you’re reading it.

Had a really interesting WCW Saturday Night match pop up on my playlist that I wanted to review, so I figured I’d try and make Saturday Night on Saturday Night a thing. Probably helps with that cool Arn/Regal match I reviewed in the Lords of the Ring article too.

This will take in the pre-Nitro glory days and the weirder days of the late nineties. I’m also avoiding the years that are predominantly collected on the Network.

Gotta mention the intro, which includes a soundbite from the ugly mug of Black Bart and Tim Brooks destroying someone on the outside with a powerbomb that looks like it ended with the guy’s smacking the concrete plus John Tatum punching geek character Sebastian off the apron and him taking a similarly nasty bump through the guardrail. Well, I guess if you’ve got them on tape you’ve got to use them.

After visiting Memphis last weekend, I’m happy to fulfil a request and head to the Sportatorium this weekend for the GWF. When I first read in wrestling magazines about the Global Wrestling Federation in 1991 as a new fan I was quite impressed, with the Patriot seeming a surefire superstar and a abundance of credible stars and a legendary home base. Didn’t take long to go wrong, though.

I’m not topping the ’89 Survivor Series review today, but after yesterday did the King win back the belt or did he ride off into the sunset?

My Lords of the Ring review, with the Ta-Gar section, got me in mind to check out some 1991 USWA, so here’s the closest episode to thirty years ago today.

As I’m sure many of you have, I gave the new show Young Rock (such a bad title!) a look. Almost immediately it started getting my back up (“Look, ma! Dad’s really over!”) but I gave it a bit longer. The third episode seemed a bit more promising because it didn’t include the goofy Asian reporter, but instead it had the goofy blonde assistant, and I really don’t have that much interest in the aspiring singing career of Ata Maivia, so I’m out.

As that third episode focused on the Hawaii promotional war, from a far more fictitious perspective, I recalled that Steve Corino interviewed main star and booker Lars Anderson a few years ago, with stories that painted Lia Maivia as less likely to have a dog full of tumours and more likely to have attack dogs on guard, so I’m going to look at that today.

I was asked in the manager matches review if I could take a look at Lord Alfred Hayes and Bobby Heenan wrestling one another in the AWA, and while I don’t have any other manager-themed matches in the bag to put alongside it I thought it would be a good time to do a lord-themed review, so have a look and see what awaits inside!

Back with some more manager matches.

Before the break, here’s the greatest of all time with his regular sparring partner, trying to weasel his way out of trouble as usual.

Managers like Sensational Sherri and Mr. Fuji have come up in recent discussions on the blog, particularly regarding their wrestling ability, so I thought I’d have a look at some in action.

Before the break, here’s Sir Oliver Humperdink failing to “restrain” himself after a fallout with Gordon Solie.

Nature Boy Buddy Rogers would’ve been 100 today if he were still alive, so I thought I’d have a look at some clips of him at different stages of his career.

When I look for things to review for the site, I try to pick things that nobody else would as a point of interest. Case in point, Reslo, the Welsh wrestling programme that outlasted World of Sport. Orig Williams became the face and voice of the show, alongside actor Bryn Fon. I believe the majority of the shows were filmed in North Wales, where Welsh is more commonly spoken alongside English, rather than South Wales, where it’s not. I’m three quarters Welsh, based on my antecedents, with my family being coal miners that moved up to the West Midlands from South Wales for better jobs and houses, and I couldn’t tell you a single Welsh word except for araf, so no remarks to be made on the commentary!

Back to wrestling, for the best.

When my family first got a satellite dish and TV package in 1991, my attention was immediately drawn to the WWF shows over some of the channels, predominantly Sky One but also elsewhere. With channels like Eurosport and Screensport there was the chance to see some other promotions, which was a bit strange to me at the time, especially when they were obviously made on and for the continent. It’s some of those matches I’m looking at here, which I believe would be courtesy of the Catch Wrestling Association in Germany and the EWF in France. I’ll start with some familiar faces, then stretch out to some weird and wonderful ones.

One of the big winners of the vote last week was Centurions, which ran for 65 episodes in the eighties and has always felt like something that should’ve been a lot bigger than it was. Great toyline, with the main characters having powersuits with ports all over them that allow you to connect different weapons and vehicle parts to them, with Ace McCloud in blue as the aerial guy, Max Ray in green as the nautical guy, and Jake Rockwell as the ground guy (although he did have some flight gear as well). The writers were pretty cool about mimicking how you might play with them as kids too, so if Max Ray is on the injured list and you need to go underwater then Ace or Jake could power up with one of his sea suits. Or, you could be Jake Rockwell and be scooting around a city in a road vehicle, but need to join up with the others quickly, so Skyvault, the space base of operations, can beam up the ground vehicle and refit you with an aerial vehicle to fly off.

Villain of the show is Doc Terror, with criminal cohort Hacker. He kinda manipulated Hacker into becoming his personal science experiment in order to ensure his freedom from the cops. Not seen, but implied, is that he has to have an arm and a leg chopped off in order to be bonded to a heavy armour and weapons suit. When the World Council see him as an abomination, and without the ability to be changed back, he throws a tantrum that seriously injures Doc Terror, meaning that the scientist has to give up half of his body AND face to live on. They can switch their cyborg halves with similar flight or weapon suits.

This is a “mini-series” insomuch as it was aired about six months before the rest of the series, but it’s not like one episode flows into the next and so on.

Had a suggestion/request to look at Larry Simon’s Florida group from the eighties, so doing just that. This can double as a tribute to Rusty Brooks, who passed away a few days ago.