And so we return to the last set of TV tapings (that made air) that aren’t actually the last set of TV tapings but the UWF book said they were so I trusted them. I should have listened to Rock Star Gary, but there’s so little going on continuity-wise between shows it genuinely doesn’t matter which ones I watched first which is such a brutal thing to say about a wrestling show.

This is the second half of last week’s match with Orton joining us in progress with an armbar keeping Paul stationary. It’s funny that the other tapings promised a face Orton vs. face Orndorff match for the UWF Made Up Title but we skip back to this alternative timeline and it’s heel Orton vs. face Orndorff. The video quality is a hell of a lot better than the previous tapings and the crowd is ON FIRE. Not literally or Herb would have saved a penny and switched the heating off. Paul powers out and snaps Bob’s arm with his legs and a standing pose for more crowd love. Bob ejects Paul out the ring and hammers away with elbows until Paul has enough and Bob takes the kind of bump through a table you’d expect Goofy to take after forgetting to put his belt on.

Bob launches a beer into Paul’s face and he sells it like the toxic waste from Robocop as the bell sounds to end the match. However, both wrestlers continues to brawl around the ring before sending the referee on his arse so they can continue to smack one another daft. The crowd loves every second of it, with a second referee coming in and checking if Bob wants to restart the match before getting immediately punched down. Crowd loved that even more. Orton finally has enough and walks off to the back, with Paul yelling at Herb “I don’t drink!!” as he’s soaked in alcohol.

Winner: Double DQ (Even split over two weeks, this was a hell of a lot of fun with both men working their little cotton socks off despite there being absolutely no need for them to do so).

The Captain no longer has a green screen and instead conducts his interviews in front of the roughest-looking wall they could find. And doesn’t he look thrilled to be doing it: 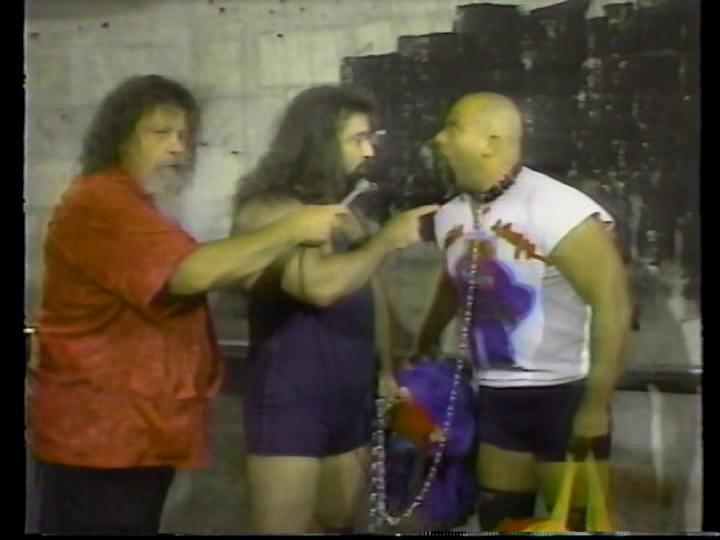 He talks to The Animal who is a Nikita Koloff-looking guy who pretends to be a dog and eat things off the floor. That’ll feed him better than Herb’s cheques will. I have no idea what happened to him.

To the Point feat. Bruno Sammartino

Alright what’s this? Albano and Abrams sit down together (with both men attempting to sit as far away from the other) with Bruno to ask about the drama in wrestling nowadays! Oh this’ll increase the heart-rate. 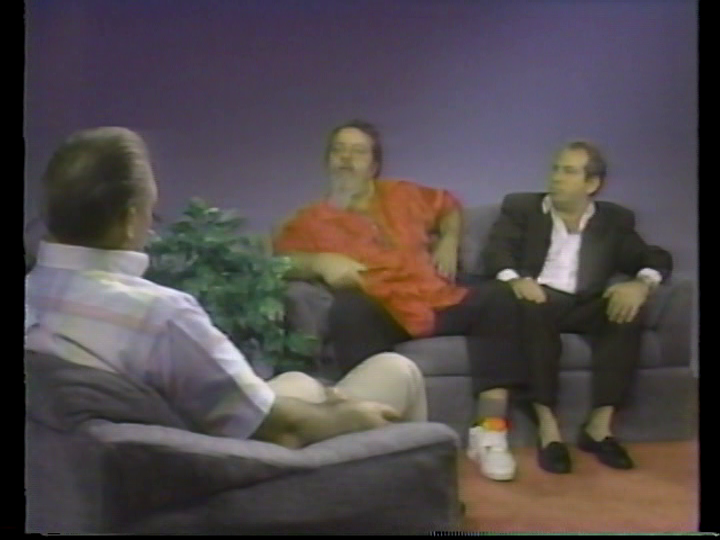 Bruno gives his thoughts about “this doctor” supplying drugs “to the wrestlers and even the promoter of that particular league we’re talking about.” It shows how bad the early 90s were for wrestling and drama when I had to wait for them to start giving more information so I could tell which specific awful period they were referring to. Bruno says we don’t need this kind of nonsense in our business and doesn’t believe “that certain company” will self-police itself. Bruno explains he never heard about steroids until 1964 and they were explained to be simply a hormone, which we now know doesn’t explain how dangerous they-

-are as Lou Albano testifies he never saw Bruno do drugs and he toured with him for years Bruno talks about the youth of the day are being hypnotized by steroids. Wow I wonder which relative of his he’s subtly referring to. Bruno praises Billy Graham for warning people of the dangers of it (until he saw Kofi Kingston win the title and changed his mind).

Lou cuts to the chase and asks why “another role model” isn’t saying the same as Graham, with Bruno criticizing a certain someone’s appearance on Arsenio Hall and his statement of only taking steroids a few times through injures “made me wanna vomit.”

Lou says he tries to tell kids nowadays the dangers of drinking because he used to overdrink, then rambles and says something about Gary Hart’s infidelities. Wait what.

Bruno asks Herb about UWF’s steroid checks. Herb says they don’t check for them yet but they don’t encourage them either. OK Bruno asking Herb about drug checks instantly made this a worthwhile segment.

Herb then talks about how current UWF Sportsamerica Champion Dr. Death can beat anyone in any company. Yeah, beat them out the door to get a flight back to Japan.

Herb defends the theatrics of the golden days (but again reminds how much he dislikes Buddy Rogers, who is the only wrestler he said anything negative about on his Kayfabe Commentaries interview) but those guys could wrestle *and* be theatrical. Not like the wrestlers in “that certain organisation.”

This started off very slowly and it doesn’t help that Bruno has all the excitement in his voice of Father Stone, but it ended turning into a weirdly enjoyable little bit of dirt-throwing by 1991 standards.

Herb “famously died in a coke and baby oil stampede” Abrams suddenly having to pretend to care about drugs in wrestling was the closet he ever came to being a real promoter.

And next we have…oh that’s it? Half a match and Bruno talking? Well I’m glad we’re saving the best of UWF for the last.

Here’s some semi-relevant stuff from the WON:

On the ESPN show this past Thursday, the group had probably the best back-to-back interviews I’ve seen all year by Jim Cornette and Scotty Anthony. The Friday show scheduled for ESPN was pulled and a repeat show put in its place because Herb Abrams sent a letter to ESPN claiming that he had trademarked the name Wet’n’Wild for Steve Ray & Sonny Beach and had Ray signed to a contract. Ray denied it to Pedicino, however ESPN pulled the Friday tape and GWF production crew had to erase all mentions of Wet’n’Wild from all syndicated and cable television shows to air in upcoming weeks that had already been taped.

Herb Abrams is trying to sell a 30-minute wrestling talk show with himself and Lou Albano around to cable networks.

Several bill collectors in Florida after Herb Abrams stemming from his PPV show.

I appreciate everyone’s patience when I got the tapings the wrong way around but I assume we’re all here to see what wacky Herb’s going to do next rather than cohesiveness. There’s two more matches from this taping, the 1993 unreleased Rampage stuff then The Blackjack Brawl before we say “bye Herb” so hopefully that’ll make up for it.