Oh yeah, finally getting to it- a very famous joshi match and one of those magical moments in joshi history.

The story here is that Aja & Bull were in the same stable (made from the aftermath of Dump Matsumoto retiring and Bull taking over the Atrocious Alliance), but Aja wanted to move ahead, and so turned on Bull and wanted her spot. So she splits off from Bull’s Gokumon-To stable to form Jungle Jack with Bison Kimura. “Good for her”, Bull said in a French documentary’s interview, “I would have done the same thing in her place”. But now that’s turned into a full-on BLOOD FEUD, and we get the ultimate stipulation in joshi: Hair vs. Hair. And given how 3/4 of the people in this match have awesome hair (poor Kyoko’s dumb ’90s middle-part just isn’t cutting it), this is a major, major stipulation. Bison’s got a fantastic mane, Aja a wicked dyed mohawk, and Bull of course has the greatest hair in the history of the business, so these are REALLY big stakes. Bull is the Ace of the promotion, but Kyoko’s only in her 4th year and is well below even Bison, so the odds are even and Kyoko’s a weak link.

HAIR vs. HAIR TAG TEAM DEATH MATCH:
BULL NAKANO & KYOKO INOUE vs. AJA KONG & BISON KIMURA:
(Jan. 11th 1991)
* They build this up showing clips of prior matches- Jungle Jack beating Bull’s team with Grizzy Iwamoto (I think), leading to Bull & Aja just SCREAMING in each other’s faces in a dramatic showdown. Aja later escapes Bull in a Cage Match, then Bull gets involved when Jungle Jack beat up the Marine Wolves in a tag match using chairs. Bull later slays Aja in another Cage Match, hitting her legendary Guillotine Legdrop off the top. Aja, on all fours, talks smack from the mat, and we set up THIS match- Bison shouts at Bull, Kyoko assures her senpai that she’s good to go, and we have a Tag Team Hair vs. Hair Match.

And Aja charges Bull on the floor before the introductions, taking out scissors and trying to cut her hair ALREADY, and we’re off! The chaos immediately sells the frenzy of the moment as a wild brawl breaks out amidst pre-match tassels as rookies try to pull them all out of the ring. Bull eats a double-lariat as they smack the crap out of her, but she fires back with her short lariats until Aja bites at her- Bison throws four Bison Chops in a row, but Bull just gets angrier and angrier and one-punches her. Kyoko throws rookie offense but gets machine-gun slapped by Aja- Kyoko gets a big reaction for trying to fight back, but eats the Uraken, body attack & piledriver, then Bison hits four backdrop suplexes in a row for two. Kyoko finally gets out of a sleeper and Bull hits a backdrop hold & piledriver for two-counts, then just goes for strangulation (I mean, it’s a DEATH MATCH). Aja tags in and gets five straight shots with her oil can, then bludgeons Bull with Urakens, repeatedly sending her down. Kyoko saves the pin, then Bull ducks one and scores her own uraken, everyone scraps, and Bull now grabs scissors of her own and cuts a chunk out of AJA’s hair! Even sending it fluttering into the air to show the fans. This just infuriates Aja, who beats on Bull and does the same thing to her!

When you gotta look up your D&D books to find out what the hell someone is braining another person with, a match is automatically ****. It’s a rule.

Pleasantries out of the way, Aja decides to just stab Bull in the head, drawing blood. Bison drags her to the floor and now everyone fights in the stands- Bull wins that with a huge wooden pole, but Aja grabs it and soon Bull snags a FRIGGIN’ FLAIL and they clash weapons in the ring! Bull manages to disarm Aja and smacks her around with it, but now Bison has one and it’s pole-shot city! Kyoko distracts her and eats a shot, so Bull cracks Bison across the wrist and grabs both poles, then Kyoko flails Bison in the damn head! Bison eats a double-lariat but won’t go down for a pin, and Aja flails Kyoko in the butt and then strangles her with a big chain- she moves to a Hangman’s choke off the top, but Bull just grabs her own chain and chokes Aja out of THAT, both Aja & Kyoko getting choked on the floor until Bull just halts Bison by snipping some of HER hair. They drag her back to the ring and she cowers and then SCREAMS as Bull keeps going for those long locks- Bison grabs the scissors and everyone scraps and bites (a subordinate even tosses Kyoko into the guardrail), and Aja takes a Mongolian chop off the second rope from Kyoko. Bison strangles Bull to stop the pin and Bull finally gets out of it and Gokumon-To hit a double-DDT on her.

Bison “F*ck YOU!” bridges out of the pin from that, but Bull hits a horrifying Kneeling Powerbomb for two, unable to thread it into a pin properly- she’s just too beaten and Bison crumpled. Bison grabs the leg to desperately stop a piledriver, bringing in a fresh Aja. A bloody Aja gets ridiculously fired up and flattens Bull with body attacks, but tries one too many and takes a lariat and a double-DDT for two. Kyoko darts up to the top for her Run-Up Flying Back Elbow for two, then another from the opposite side! Big German suplex- two! Kyoko can’t believe this and is getting desperate, allowing Aja to splatter her with a body attack and escape. Bison demands Bull and uses a huge Bison Chop and tosses her around by the hair, but Bull dodges a double-team of their strikes and kicks the snot out of Bison- Northern lights suplex gets two.

Bull grabs the nunchucks for a beating, then hits another Kneeling Powerbomb on Bison- Aja saves. A subordinate desperately tries to give Bison her tonfa rod as Bull/Kyoko just double-slingshot front suplex her. Kyoko tries her Slingshot Backsplash and just splats (slipping AND Bison moving), but Aja refuses to capitalize- she wants BULL. So she throws Urakens but misses a falling headbutt, but hits a Super Powerslam! Flying Bison Chop! Bull rolls her up, but Bison rolls over for two. Bull gets thumped, but everything breaks down and she serves as a base for Kyoko to fly off and plancha Bison! Bull hits a corner lariat & leapfrogs Kyoko in for a kick, then set up the Guillotine Legdrop for the finish… but Aja comes in and spams oil can shots! The fans are mortified and think it’s over, but Bull & Kyoko get thrown into each other… and Kyoko leaps into Bull’s arms and springs back for a flying Uraken on Aja! Bull clocks Bison with one too, and that sets up a fallaway slam into the Guillotine Legdrop as Kyoko dropkicks Aja to prevent another break-up… THREE (22:55)!! Bull & Kyoko win! Aja & Bison are to lose their hair! 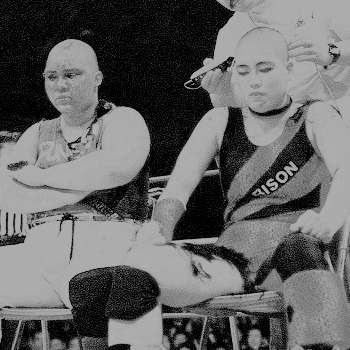 And Bison WAILS. Horrified at the thought of losing 2-3 years worth of hair growth, she bawls and desperately tries to get out of it, but is hauled down and has her hair cut. Bison sobs loudly, just crying her head off, while Aja is just bundled-up rage, completely silent as Bull snips off her big mohawk and the barber shaves her sides. And finally Aja shouts out “STOP CRYING!” and Bison promptly does, sitting their sniffling as she’s shaved down to the scalp (the crowd shrieks in horror as what’s left of her mane is shaved off). Aja, meanwhile, mimics Dump Matsumoto exactly (the commentator even says her name directly), sitting cross-armed on the chair, refusing to give the victors an ounce of satisfaction. And she GLOWERS. Holy hell does she have a look that could kill here, with hate seething out of every pore. I feel like every Uraken she’s ever thrown has a bit of this moment wrapped up in it.

Aja & Bison stand up, fully shaven, and cut a short promo against their opponents, Bison doing some AMAZING acting, just barely holding it together but standing proud. Bull & Kyoko just stare downwards, showing guilt and shame that it’s gone this far. Apparently this scene caused a huge stir in puro at the time and made all the wrestling papers, instantly making Aja a huge star.

Just one of those beautiful, utter messes that is so chaotic and anarchic and you just love it. They STARTED the match with hair-cutting and everyone throwing bombs to kill each other immediately, then settled into almost a normal match, and then it turned into a vicious weapons match with scissors, wooden poles, a frickin’ FLAIL, and chains to aide in strangulation- this was about hate and humiliation, nothing more. Kyoko, the lowest-ranked wrestler, knew this was her shot so she made the most out of it, showing full energy and tons of desperation as she tried to help her boss. Panicking when Aja’s kicking out of her stuff and throwing bigger and bigger moves at her- stuff like that. The desperation and struggle really paid off in the end, as everyone’s got flat hair and is bleeding or covered in sweat, flopping over after every move like they have nothing left except the next big thing. I loved the ending- the heroes have it won, but Aja flies in with that damn oil can again. Bull pounds the mat in frustration in a great moment, but the double-team… backfires! Despite her lower station, Kyoko uses her athleticism to stun Aja and they finish off Bison, Kyoko finally blocking Aja with a dropkick and THAT’S the pinfall!

Rating: ****1/4 (as a match, it meanders in parts, but has no restholds and is just so full of mayhem that you love it- their moves get appropriately sloppier as time goes on and a final double-team wins the day)