We’re at our third set of tapings from Universal Studios so let’s see if the crowd is still there or if they’ve moved onto The Funtastic World of Hanna-Barbera.

Lou clarifies that Bruno is still negotiating with Sportschannel for the title tournament, which is a hell of a three week assignment. It didn’t take that long to negotiate the Iranian Embassy siege.

The Black Harts (w/Luna Vachon) vs. Rico Federico & The Lynx

Hey it’s influential Wrestlecrapper Battle Kat with a legally distinct name change! The Black Hearts hail from “Everywhere and Nowhere” which is something. They land their double rolling clothesline to start as both men are in between AJPW tours and are acting like they’re still there. Lynx gets a snap suplex and a Tiger Mask I style spinning heel pick takedown. Luna distracts Kat so one of the Harts can land an Axe Handle Slam from the top rope to the grass, taking the bump on his knees. Jesus Christ, there’s less then a hundred bored tourists here, save your limbs for the Super Generation Army. Rico kicks out of a piledriver as Lou sneezes on commentary and doesn’t bother turning from the mic. Rico gets locked in an Abominable Stretch (called a “backbreaker” by DeGeorge) before kicking out of La Magistral as this match is all over the place. The ref misses the hot tag to Lynx as a fan goes and bothers Lou while he’s doing commentary. A clunky double DDT off the second rope only gets two as Rico is suddenly kicking out of more moves than he’s ever successfully executed on TV. Rico kicks out of a Fisherman’s Suplex from the apron into the ring as I feel the need to remind people that he’s a jobber. Lynx decides to wrestle like he’s made a hot tag but Black Harts strongly disagree with this plan of action (even though they’ve been building up to it the whole match) and the result is a horrible series of strikes and exchanges with everyone assuming the other guy is going to start selling. Rico thankfully tags back to restore the order of him kicking out of cool moves before succumbing to an interesting elevated DDT off the top.

Winners: The Black Harts (Like an old woman’s shit, this was all over the place. This was Rico’s last appearance for UWF so he couldn’t capitalise on the success of kicking out of La Magistral to no reaction in front of the Nickelodeon building.)

I don’t know what Dusty did to deserve getting a 1.5 rating on Cagematch but oooof. Got the red text and everything. Paul looks completely miserable walking to the ring. Dusty complains about a hair pull while Lou does the same “I used to be fat” routine he did last week. He’s repeating bits three weeks in? Dusty begs off and off until he extends a hand and Paul short-arm clotheslines him out the ring. This goes on for a while until Paul piledrivers him right onto the small ferret that is Dusty’s muffler.

Winner: Paul Orndorff (Paul had a face like he’d been eating the regret-i spaghetti out there).

Cooper doesn’t have a Cagematch so as far as I know he could be posting on the BOD. Let us know what you’re up to, Jimmy. Lou won’t shut up at all, imagine if Taz replaced his likability with ten Red Eyes. I like Bob and I’m glad he’s giving this match the urgency it deserves but that doesn’t mean it’s anything worth typing out, especially with the crowd sounding deader than Sheffield after Threads. Orton punches Jim around the ring before getting his feet up on a corner charge and finishing with the Superplex (and it was at least a good un.)

Luna has a whole damn live snake around her neck as she screams and screams to be heard over Lou’s yelling before Albano finally walks off. Luna was so cool. 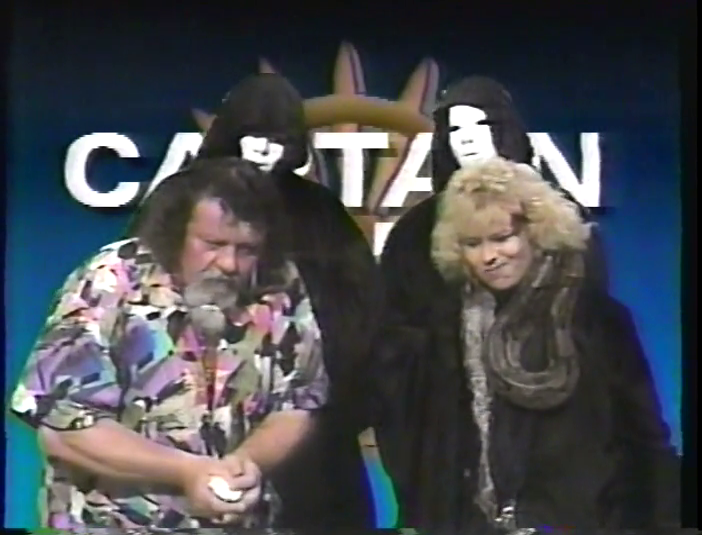 B. Brian Blair vs Rusty Brooks

Oh God a Blair match, that’s all this show needs. Nothing ever interesting happens in these matches so let’s discuss the commercials. Boz stars in the Razzie nominated Stone Cold. He’d then act alongside Stone Cold in The Longest Yard. Hey how about that. Lou’s reciting Rodney Dangerfield lines as DeGeorge has no idea how to contain him, like Boz trying to deal with Bo Jackson. John Tolos shows up to really finish this trifecta of terrible so let’s go back to the commercials. City Slickers starring Billy Crystal is in cinemas now. Never seen it but RJ City is always raving about it, which is probably more than he’s done for a Blair singles match which ends with a Scorpion Deathlock.

Lou notices Tolos is now managing The Power Twins. Yeah what happened to that other guy? Speaking of unexplained appearances, Sunny Beach is stuck in the airport so Steve Ray offers to wrestle both of them. Steve makes a brave go at it while Lou continues to put himself over at the expense of the action. Steve is likeable and colourful enough for this crowd to actually start making noise so well done. Steve wasn’t particularly good in ring but boy could he make kids give a damn. The Power Twins get sick of getting beat up and double team Steve until Sunny Beach arrives to clean house with a briefcase. Crowd is REVVED UP as Wet ‘n’ Wild make a comeback as…the bell rings? Yeah sure DQ the scheduled wrestler for showing up, why not. Beach then blames Tolos for cancelling his ride from the hotel and we immediately cut away like “that must have been it, no need to ask Tolos or anything.” Match barely existed.

I didn’t post a GIF every time they mentioned Beach Blast this week as they’ve bothered to mention wrestlers for the PPV. No matches yet so instead of some free hype for the show here’s Jack Palance doing one armed push-ups during his Oscar win for City Slickers instead.

Speaking of ancient fitness guys, Melzter claims “Bob Backlund is now considering working for Herb Abrams’ PPV show in June, but he’s apparently only interested if he has the feeling that the wrestling fans want to see him make a comeback.”

On that exciting note, I’ve been Maffew and this has been an Abrams Aproduction.