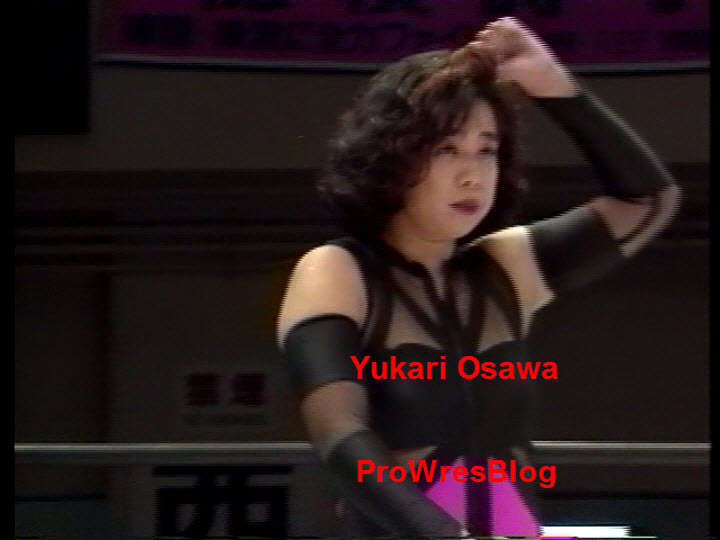 Yeah, this is like the clearest picture I could find. Truly the sign of a big star.

-Yes, it’s time for another edition of “Jab tries to figure out stuff about a no-name wrestler because he’s insane”. Yukari Osawa is a low-tier LLPW wrestler who I only know because of the periodic LLPW shows that end up on YouTube that need to use their entire 12-person roster, and so here’s this random backgrounder, who kind of has that “Bison Kimura” athletic-asskicker look with the strong makeup and mid-length hair… except she’s a jobber.

It’s kind of weird that a company with so few wrestlers would have people who almost never win, but there you go having Osawa beating only green rookies and then jobbing in solo bouts against even the midcard, and never developing to the point where she threatened the LLPW Pillars (Kandori, Sawai, Saito, Tateno, Kazama). Sometimes you’ll see her tag with Miki Handa or Michiko Nagashima and beat another low-tier duo, but for the most part she has no solid push.

In matches, she rarely stood out, despite an interesting look- she is your standard “unconfident, blank-faced rookie” even with some experience under her belt. In 1993 bouts she kept throwing these awful spinkicks with no speed or accuracy- just kinda limply tossing a leg at someone’s belly. Though by some 1994 stuff I’ve seen she’s okay- tolerable and with a few nice moves, but nothing really flashy or setting her apart. REALLY nice bridges on those suplexes, though- you know they’re great when they’re up on the toes like that! I actually called one the “best I’ve ever seen” down below! So she’s not all bad! Just, like… mostly unmemorable and never giving anyone a reason to care. To me these people are almost as interesting to research as the big stars, but man sometimes I don’t turn up much!

CAREER TRAJECTORY:
-Cagematch says that Yukari debuted in 1988, but has very few matches from that time- she was part of the early Joshi Women’s Pro Wrestling (JWP) promotion. She showed up in the one-night LPWA Tournament in 1990 (recently reviewed by Mike Fitzgerald!), losing to Reggie Bennett early on, and then split off in 1992 with one half of JWP’s roster to form Ladies Legend Pro Wrestling (LLPW). Here, she was largely a minor star- I see her beating some green rookies, but anyone with any name value at all defeats her.

AJW/LLPW Super Whirlwind saw her team up with Eagle Sawai in a losing effort against Aja Kong & Kyoko Inoue, who had little problem crushing her (Eagle was usually kept credible in interpromotional competition). At AJW Legacy of Queens, she’s part of a 10-Woman Elimination Tag Match, jobbing out in a big hurry against AJW’s women so Eagle can get her big solo showcase. She heads to FMW with Eagle, losing to FMW’s Crusher & Shark duo.

1994 actually seems like “the year Yukari actually gets a push” judging from Cagematch, as she suddenly goes from jobbing to Rumi Kazama and Eagle to changing her name to “Jen”, then “Jen Yukari” and is beating equal-tier wrestlers. She & Mikiko Futagami will beat Carol Midori & Mizuki Endo, for example, and she defeats Carol, Michiko Nagashima, Nobue Endo, Mikiko and Miki Handa all that year. I mean, those are not big stars at all, but she’s consistently winning! She loses a few tag matches (AJW’s Las Cachorras Orientales beat her & Miki Handa, then her & Harley Saito, for example), but it’s still something. Like most LLPW wrestlers other that Kandori or Eagle, she was a sacrificial lamb in interpromotional stuff.

Weirdly, her 1995 consists of a lot of stuff in Wrestle Association-R (Genichiro Tenryu’s upstart fed that often had random wrestlers from other promotions in exhibition “something different” bouts, including LLPW). Here, she seems to lose on nearly every card in a tag bout, with random partners, before suddenly winning some by the end of the year. Her LLPW matches by this point were still mostly losing to big stars (including a handicap match where she teams with a jobber against Rumi Kazama). Then we’re in 1996, with her ending her career there. She wins, then loses, trios matches in GAEA Japan against a Chigusa-led squad. In LLPW, she loses to Noriyo Tateno and her & Kazama lose to Kandori/Omukai twice, but she wins in a variety of trios matches. Her final match sees her & Eagle Sawai team up to beat Karula & Shinobu Kandori by DQ.

So overall, she had a very middling career with almost no big wins- not Title victories, no great matches, nothing. She just kinda stuck it out for eight years without ever getting that good or impressing, and then was gone. WrestlingData lists her win-loss record at 39-50, which sounds about right. So in the hottest era for women’s pro wrestling ever… she’s just “one of those background faces”. But still, nice suplexes!

UWA WORLD WOMEN’S TAG TITLES:
LAS CACHORRAS ORIENTALES (Etsuko Mita & Mima Shimoda) (AJW) vs. HARLEY SAITO & JENN YUKARI (LLPW):
* LCO’s now in a match against an LLPW squad, putting one of their sets of tag titles on the line. Yukari is an extremely minor star so I don’t think this one was a big question either, but Harley’s a bigger star than either LCO member at this point. Their ring gear is AMAZING, particularly Yukari’s peacock-feathered train. Their wrestling attire is even more garish, Harley in white with a big green chestplate covered in 1970s designs, while Yukari has the ’70s wallpaper designs over a full-body leotard.

Shimoda gets the worst of exchanges with Team LLPW, but draws the biggest pop for swatting Yukari’s foot away- LCO is the best. Harley kicks her, but she clotheslines out and Mita pulls hair and uses Blazing Chops. Harley counters the pin with MMA, throwing on a keylock of all things, but Mita gobbles up Yukari and they hit the Bitch Pose as the crowd goes wild for them! They slowly work Yukari over with basic stuff for a few minutes, but she tags out and Harley hits two backdrops and a tombstone on Shimoda for two. Spinning heel kick gets the same, but Yukari hits Harley and LCO pounce on them for a beat-down outside the ring, but Team LLPW comes back with stereo planchas to the outside- Yukari hits a Perfect Plex (with the leg hooked from the other side) for two.

Harley kicks Yukari by mistake, and she eats the Electric Chair/Splash combo for two. Mita can’t hit the DVD, but a Northern Lights Suplex gets two. Shimoda’s splash hits feet and Harley misses a heel kick by a MILE, but Shimoda sells it anyway. Shimoda reverses a whip with a Tiger Suplex for two, and Mita tries a backdrop, but Harley barely hits her feet (that could have gone VERY badly) and does a German for two. Mita catches her with a Superduperplex for two, but she reverses Shimoda’s falling clothesline- she lands BADLY on a splash attempt, though, but manages to copy Shimoda’s Tiger Suplex reversal for a close two. I think Yukari botches a rack-style move she was trying, but Shimoda hits her clothesline to bring both women down to a pop. Yukari manages a German with the best “on the toes” technique I’ve ever seen for two, but LCO just jump them and Mita hits the Death Valley Driver! Then they do the Assisted Plancha/Dive combo to Saito (Shimoda almost landing on her head as a result)! This leaves Yukari vulnerable- the Death Lake Driver (tiger superplex) finishes her at (12:49).

Very slow-paced “meh, let’s have a Just Good Enough match” kind of a deal here, with the crowd not buying LLPW’s stuff AT ALL, but they again started a quicker pace eventually. These shorter match times are really causing some odd match-construction that way. Harley is usually the best worker of the four, but today was very sloppy and not hitting stuff right… not that the others were much better- Yukari hit SOME good stuff, but the crowd straight-up laughed at whatever that rack was going to be (Shimoda had to jump off to “save” the move and Harley ran in as well). All in all, she looked out of her depth. This kind of “uh, I dunno what’s next” sloppiness brought the match down a ways, preventing a proper “LCO Template” bout, which usually guaranteed *** matches.

Rating: **1/2 (some good stuff, but a slow start and sloppy finish hurt it)

JEN YUKARI & MICHIKO OMUKAI vs. MIKIKO FUTAGAMI & MIZUKI ENDO:
(Wrestle Association-R, Nov. 29th 1994)
* Here’s a handheld video of one of those WAR shows where LLPW’s wrestlers do a thing. Of these four, I think Omukai actually became the biggest star (though GAMI was around for eons as a tag worker), as she was a big part of ARSION as it was starting to fall apart, and stuck around as a freelancer for a couple of years before retiring- here she’s just a jobber, though. Tall, slender and good-looking, it’s no surprise why SOMEONE saw money in her. The ring announcer is a big fat guy in a red tuxedo so that’s amazing. Futagami is in the “LLPW Uniform” in white & light blue, Endo is in a tiger-striped outfit with parachute pants, Omukai is in blue & purple, and Yukari’s in what looks like every color ever set up like a patchwork of shards, coming down with a MASSIVE ostrich-feathered backing on a glittery robe.

Omukai hits a mule kick on Endo and Jen works her over with kicks, and they settle into restholds. Gami’s soon in and they thump on Omukai a while, though- Gami seems very credible here. Omukai finally escapes with some facecrushers on Gami for two, and tags out- Jen spams running ass attacks and hits a nice bridging butterfly suplex for two. But we’re back to restholds, Gami eventually reversing a half-crab to an anklelock. Gami finally breaks up several minutes of restholds with a backdrop suplex for two, but Jen reverses a whip to a side suplex for two. Omukai hits dropkicks spam for two but walks into a kick- Endo sends her to the ropes but she launches back with a slingshot for two. Omukai hits a Northern Lights Suplex, the pin broken up by Gami with the least urgency I think I’ve maybe ever seen in an assist.

Jen tries a roundhouse kick but it’s caught with a backdrop suplex for two. Jen reverses another whip with a bridging fallaway slam for two, then Omukai dives in with a flying knee to Endo’s head and Jen hits a good bridging German for two. Gami charges in with another release backdrop and then a backdrop/flying splash gets two. Jen just casually escapes and Omukai gets Endo with a delayed Northern Lights Superplex for two- Endo saves. Omukai tries another Flying Knee but misses and gets caught in a pumphandle toss (like, thrown straight backwards out of the pumphandle move), and that’s the three at (13:31).

haha HOLY SHIT this was a “House Show Special”- just fourteen minutes of people sitting on each other’s butts in restholds. Well, uh, not really a showcase for Yukari, but she looked good in there- those bridges were right up on the toes and had perfect technique. Hard to judge someone just off of their house show lackadaisical bouts, though.

Rating: *1/2 (some good bits, but mostly restholds. For a long time)