Like Jason in Friday The 13th Part VIII, we’ve finally reached New York for the second era (error?) of UWF so instead of the intro being filled with public domain shots of SoCal now it’s the Statue Of Liberty, Empire State Building and Bernhard Goetz on the Subway.

Greg CROSSES THE LINE and joins UWF after WWF released him a few weeks ago. Or he left of his own accord due to The Honky Tonk Man’s departure scuppering his planned feuds. I’m not really sure. I checked the Something To Wrestle With episode about Greg and Brucie P couldn’t remember what the deal was either saying “contracts were different back then.” Crowd is happy to see him but Bruno is happier to see Killer Kowalski at ringside. Greg smashes a giant chop onto Blaze and soaks up the adulation before following up with a Butterfly-I’m-not-bumping-for-it-what-are-you-nuts Suplex. The contrast between the crowd’s cheers and the close-ups of Greg’s grumpy face are hilarious. The New York fans are losing their mind for the Hammer as Greg teases the Figure Four Leg Lock to butter them up some more before locking it in for the hot win.

Winner: Greg “The Hammer” Valentine (I like to think WWF watched this match and were practically falling over themselves to get to the phone to re-hire him.)

Post-match, they show Killer Kowalski watching at ringside with Nikolai Volkoff, who would have also been a free agent at this time. Jesus it’s like Summer 2020 with all these WWE releases. All the commentators say is “hey look at that” but least he’s wearing a nicer suit than the one DiBiase gave him. 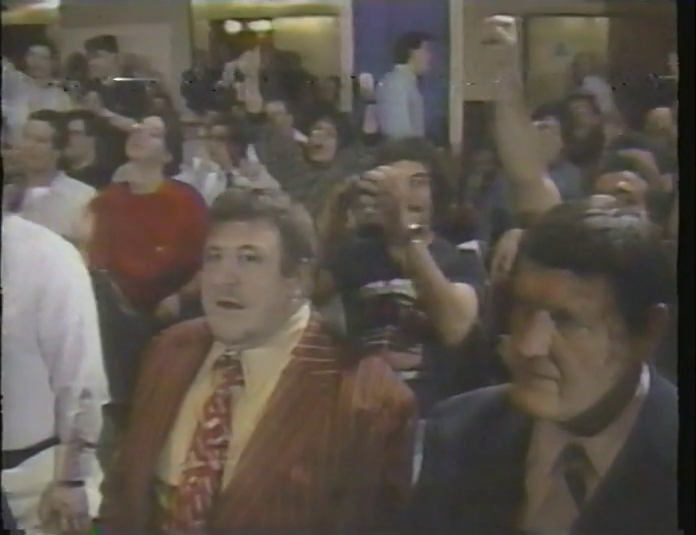 Also I don’t often comment on the adverts (because they’re usually shite like golf training videos or hair plugs) but we get to see the Telly Savalas’ Players Club commercial which I’ve only ever seen the Jim Carrey’s parody of, so that was something.

They air another Andre The Giant promo where he talks about how you’ll be seeing lots of him on this show. To remind everyone of the timeline, WWF had announced Andre’s return in OCTOBER and he was supposed to return at the Royal Rumble (five days after this show aired) but didn’t compete due to physically being Andre The Giant in 1991.

We finally get a good look at the crowd and in fairness they’ve packed out this hotel room. Crowd not as excited to hear Vanilla Ice as they were for The Hammer but they pick up once Parsons throws a chop that sounded like 10lbs of meat falling onto the kitchen floor. Wolfe comes back with some tattoos of his own but he makes the mistake of trying to bounce King’s head off the apron but it’s 1991 and BLACK PEOPLE HAVE HARD HEADS so he retaliates with more brutal chops. Dusty avoids some clotheslines and bounces off the ropes before his knee blows out in what looked like a real injury, with Parsons quickly finishing off with a headbutt.

Don makes his entrance to the Hawaii Five-O theme song and the crowd loves him, but this will only be good if Michaels is up for doing all the work. Oh and the first move is an Irish Whip into the corner which the jobber sells by flying over to the apron. Phew. After getting thrown off the top rope, Don sends him flying with a biiiig backdrop because Michaels is FEELING IT.

Don lands a running powerslam but picks him up at two to continue the offence, to the absolute joy of the crowd. After nearly decapitating him with a clothesline, Don picks him up and the crowd cheers again. Turns out when Philly fans were calling New York fans monsters for years, they were right. Michaels misses a dropkick to mark his only bit of offence before taking a Manhattan Drop and the crowd gets distracted by something in the crowd and it’s… 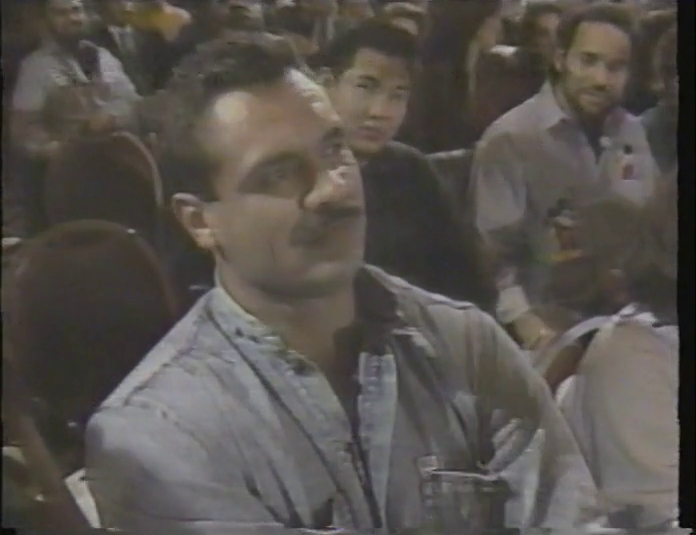 The master of appearing on shows despite technically being with the WWF, Rick Rude! And he hasn’t even shaved. Don flexes at him but Rude doesn’t react so Don blows him a snot rocket in his general reaction before finally finishing Chris off with the Tombstone.

Winner: Don Muraco (Don was like the bear from The Revenant out there. I didn’t realise Rude actually appeared for UWF, I only remember reading WWF’s legal threats if they dared show him on TV.)

Greg talks about making Lou a lot of money before smartening up and moving on and yadda yadda I’m pretty sure mixing Lou’s inability to shut up and Greg’s stoicism counts as a screwball.

Herb plugs the NYC return shows on February 9th (that would get changed to February 15th soon) and has learned his lesson from before and doesn’t announce any matches.

Even in this hotbed of wrestling, Blair only gets a polite “oh it’s that guy” response. Some standard but dull wrestling occurs with the only highlight being Mike Williams attempting to hide behind the ref. Blair finishes with the Scorpion Deathlock and the crowd boos. Post-match Blair tries to suck up to the crowd by complimenting NYC and the crowd doesn’t even blink for fear it would sound like a response.

Louie apologies to the guys for their girls watching him so much. Thank God he’s here to spice David up. Back-and-forth action is (like most of David’s work) solid but un-noteworthy with Louie’s reactions to his actions keeping the crowd interested. Figure Four Leg Lock (on the same show as Greg Valentine? What AEW guy is agenting this show?) finishes to give the Human Ikea Furniture the victory.

A rematch from last week. Pre-match, Ivan emphasises he wants to avenge his loss, and Steve wears the same colour as the green screen background so part of him gets absorbed into the chroma. 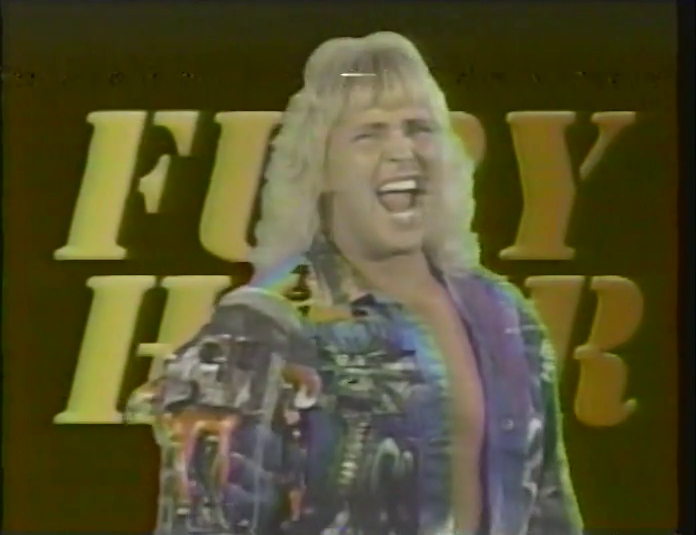 Crowd appreciates Ray’s energy but don’t seem impressed with his wrestling. After Ivan gets him in a roll-up, Ray gets his legs around Koloff’s head to spin him around with a head scissors and instead of a pop we get a cut to the crowd in an attempt to disguise the “boring” chants. We fast forward to Ray crotching Koloff on the top rope and flying through the air with a clothesline, only for Koloff to bounce Wild Thing’s stupid head into his chain to get the win to a surprisingly loud pop. I’m not saying Ray was rough in the ring, but the crowd started the match chanting “USA” and ended it cheering for Koloff.

Overall: Come for the drama and stay for…well, the drama. Between Andre, Valentine, Honky Tonk and Rude we’re getting ready for a fun few weeks of legal battles more interesting than the in-ring ones.

Nothing to report from the Observer (yet) so here’s a letter from a fan sent this week:

I read the article in the Pittsburgh Press where Bruno Sammartino said that he was asked to lose but never would because the other guy could never beat him. He said that he hoped that nobody ever lost to him on purpose. He then ran down the WWF, saying the Ultimate Warrior can’t wrestle and that it’s a total carnival, but the new UWF isn’t. Bruno is my most embarrassing wrestling personality of the year, between that self-gloating xenophoic autobiography and now with this interview. Why do people keep portraying him as a hero? The fact is, he never sold or put people over, which in my mind makes him a bad wrestler. Admittedly, you want to raise the champs hand, but it would be nice if the champ worked the match to make it look like he was in danger. The sad workrate of today’s WWF can be traced back to Sammartino as champion. It irks me that they pushed him so hard while holding back real talents like Karl Gotch, Killer Kowalski, Bruiser Brody and Stan Hansen. I wish I had grown up in St. Louis instead of Pittsburgh, even though I love the city, that way a real hero like Lou Thesz could have been my childhood idol instead of Sammartino. Andy Stowell