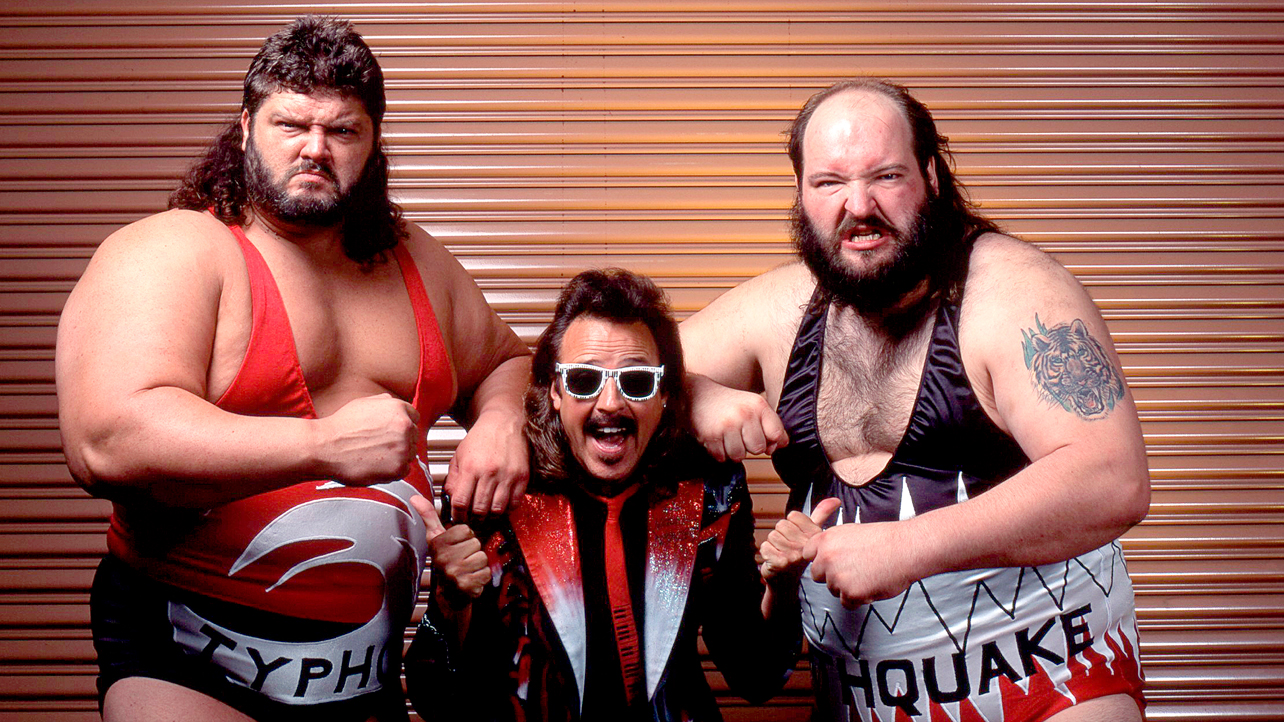 Oh man, the size difference here- there’s just no chance for the poor Rockers, experienced as they are. Shawn bites his way free of Typhoon’s grasp and Marty hits a slingshot kick to trip him over Shawn. Marty comes in and dodges Earthquake around but finally misses a shot into the corner (I love how EARTHQUAKE of all people can dodge him), taking some sledgehammer blows and the powerslam. Quake readies the Vertical Splash, but Shawn grabs the “hoof” (per Monsoon) from the outside to block. Typhoon drops a mother of an elbow (Monsoon AND Heenan mark out for it), but misses a second and Shawn leaps over and kicks him, then blasts away and jumps over an interfering Quake, and the Rockers smash the Disasters together! Marty leaps off Typhoon but gets caught by Quake, only for Shawn to fly off the turnbuckles and knock them over for a one-count (Quake’s not even legal!). The Rockers team up on Quake, but Marty accidentally dropkicks Typhoon in the back, squashing Shawn between the Disasters. Then Marty, like a COMPLETE MORON, decides to chase Jimmy Hart from the apron to the back, leaving Shawn alone- goodbye. Earthquake Vertical Splash kills him and he just tags out to Typhoon, who adds the Tidal Wave at (4:35) for the win- “Get the paramedics RIGHT NOW”- Monsoon. “Last time I saw a guy lying down holding his stomach like that, he’d had lunch at El Matador’s house”- Heenan.

Fun quick match- nobody hit so much as a single resthold and the Rockers got to use their speed and double-teams to make it look like they had a chance all match long, as they ran circles around the Disasters and made them look foolish. But then one mistake and they were donezo, especially after Marty got booked like a moron there.

GIANT WARRIOR vs. SKY WALKER:
(World Wrestling Council, 1991)
* The Land of Giants EXPLODE! Both guys are in their L.O.G. gear (Ultimate Warrior facepaint and long black tights), but fighting each other in a Puerto Rican baseball stadium, where the ring is miles away from any fan. Giant Warrior is the brown-haired one with black facepaint, while Sky Walker (Tyler “Sabretooth” Mane) has the blond rat-tail and red facepaint.

Both duck under each other’s clotheslines until Warrior hits a back elbow. Sky actually bails for a minute, then holds a headlock for another as this is just scintillating. Warrior eventually backdrop suplexes out and chases Sky outside, whipping him into the post a couple times. Sky makes a comeback getting his foot up in the corner, then slowly pounds away with a variety of shots- “snap” suplex gets two and he chokes Warrior using the ropes. A close-up reveals that Warrior’s actually bleeding- not that any fan could see. This goes on FOREVER, but Sky finally misses an elbow to set off the comeback- Warrior throws forearms and a corner clothesline for a one-count, then readies Sweet Chin Musi– wait, that’s a Big Boot. But Sky Walker grabs the ropes off the whip to avoid it and hits a big clothesline, for three! But no- Warrior had his foot in the ropes and the ref waves it off. Sky spends way too long arguing, giving Giant Warrior time to recover… when Sky comes in for another clothesline, Warrior gets his boot up again, and the Big Boot finishes at (8:03).

This felt like it was 5-6 minutes longer- when guys are this limited, “Sequences” where someone just walks around and adds a double-axehandle, a stomp, or choking in the ropes can go on for an eternity, and it really messes up the matches. That both had terrible finishers- a running clothesline and a big boot- didn’t help. There was sorta psychology in that comebacks came from similar reversals and Sky Walker got too distracted and let his opponent recover, but still, this was bad.

DIAMOND DALLAS PAGE (w/ Kimberly) vs. PSYCHOSIS:
(WCW Monday Nitro, 4.21.1997)
* Classic WCW- take a great Cruiserweight worker and feed him to a Heavyweight for a totally random TV match. Psychosis is in his rad black & gold bi-sected gear, while Page is in shiny black leather tights.

Psychosis wins a criss-cross with a dropkick then climbs- DDP leaps onto the rope, shaking it and crotching Psychosis, then swings his legs to the inside of the ring- Diamond Cutter off the top! DDP wins at (0:49). haha, WHAT? They had a guy having ****-***** matches with Rey Mysterio on the shows and they literally squashed him as bad as Triple-H squashed Kaientai? See, THIS is why internet wrestling nerds hated DDP as much as any other wrestler back then. Granted, this puts over the Diamond Cutter as an “Outta NOWHERE!” finisher that can be hit from any position, but you couldn’t go 5-8 minutes before this? For a modern context, imagine if Tony Khan had a talented friend, and said friend beat Ray Fenix in 49 seconds on Dynamite one day. We’d all be rightfully pissed!

Anyways, Macho Man comes down to talk shit (with nWo Liz! HELL YEAH!), but Page talks in his uneducated Jersey drawl that nonetheless has the fans wildly in his pocket- well, he’s over. The rocket push worked- I’ll give them that.

Rating: DUD (even shorter than I was expecting from a 5-minute YouTube clip!) THE STEINER BROTHERS (Rick & Scott Steiner) vs. DOUBLE TROUBLE (Val & Tony Puccio)
(WWF House Show fancam, Jan. 30th 1993)
* So remember last time when I showed y’all The Undertakers? Well this is the job they got for selling the naming rights to the WWF- a house show run as a pair of JTTS guys. So the boys are even bigger a couple years later, with Val being MASSIVE- easily over 400 lbs and broad as hell because he’s also quite short for a wrestling in ’93. Tony is chubby but not THAT big. Both guys are in black & white tracksuits with shades, bro, while Rick is in pink or red and Scott is in yellow.

Scott ankle-picks Tony and twists his leg, then hammerlocks him- Tony is too fat to go up for a hiptoss, so Scott pulls out a wicked T-Bone Suplex instead- fuck I love the Steiners. Tony finally tags out to Val, who literally wastes a full minute jabbering with some ringside fan, then calls out Rick, who naturally tries to slam him like a dope. Then he tries a GERMAN- haha, nope. So Rick has the fans behind him… but psyches Val with an ankle-pick, drops a vicious elbow, then brings him up and hits a BELLY-TO-BELLY of all things as the crowd roars. That’s terrific. Scott smothers him with amateur stuff, but Val finally pushes him in the corner and the twins double-team him, finally getting some offense. But Tony tries a whip and Scott reverses, hitting the Overhead Belly-To-Belly! Val comes in to break up the pin and hits a Big Fat Splash on Scottie, and Tony follows with his own. Val gets whipped into Scott, and Tony follows in again, but Scott gets his boot up this time, leading to Val eating Rick’s clothesline. Tony tries to climb to hit corner punches on Scott, but he’s dead- Rick just scoops him up with the electric chair and Scottie finishes with a Doomsday DDT at (7:00), just SPIKING Tony (who was too big for the Bulldog, I bet- both guys had to hold him up for this one).

haha, okay that was terrific for a house show match. Double Trouble couldn’t do much, so they were largely bump machines for the Steiners, but as big boys, each bump means more. Val didn’t get much air taking a belly-to-belly, but at 400+ lbs. that spot is amazing and went over great. And Tony could get up for the overhead b-to-b and the Doomsday DDT, which is good for a hefty guy.

MIKE ENOS vs. MIKE TOLBERT:
(WCW Saturday Night, sometime, I dunno)
* It’s the battle of the Mikes! Oh shit, Mike Tenay just used that line. Tolbert is one of those classic “Power Plant” guys- 10/10 look, but never learned more than the basics and was sent out there as a rookie, and quickly got forgotten by the business. And shockingly, Enos actually gets a JOBBER MATCH- this is a dude who had no charisma but a lot of “go” and was a better worker than most remember, but there was just no chance for the former Blake Beverly from 1990-2000 to get over. Tolbert is a bodybuilder-type dude in black trunks (the comments on YouTube are… well, you know those guys who go around talking about “handsome muscleboys getting humbled” and whatever? They’re BIG fans of Tolbert), while Enos is in black tights.

“Power Plant” basics to start, as Enos misses a charge and gets armbarred, but comes back with a slam and poses. He “misses” an elbow (it actually hits) and Tolbert comes back with a slam, even hitting a butterfly suplex as he does the ADVANCED PP stuff. But it only gets a one-count, so he goes to a crucifix, leaning WAY forward on it, but Enos is so freaking strong he can actually hold him up like that, hitting a Samoan drop for two. Helicopter slam keeps up the punishment- Tolbert fights out of a bearhug, only to eat a powerslam coming off the ropes. Enos misses a somersault senton over the ropes, though, and Tolbert hits a Springboard Clothesline. Wow that was a terrible one (he leapt horizontally, getting no air), but still! But then he runs right into an elbow, and Enos hits that Fallaway Slam off the second rope- seriously, he just DEADLIFTED Tolbert off the top rope like that. Lame standing “Rings of Saturn” double-hammerlock gets the submission at (4:04).

Shockingly good early match from Tolbert, thanks to Enos being a careful veteran in there. You gotta take your time with rookies sometimes, especially if they’re getting a lot of offense, and you could see how good Enos was, giving him openings and not doing anything too crazy. But seriously, HOLY SHIT at how strong Enos was here- on 2-3 occasions, he manages to deadlift the good-sized Tolbert up and throw him around. That alone made the match pretty cool, even if the rookie’s stuff was very basic (if adequately-performed for the most part).