Herb describes Billy Jack as a ”real character” so he must have watched his shoot interviews. Haynes delivers a German Suplex twenty seconds in and pounds away on the jobber, stopping to ask the ref ”this guy’s a pro, right?” Keyes tries striking Billy Jack and he doesn’t even sell it before hitting him some more and ending with the Full Nelson.

This block of TV is sponsored by Rocky V. The only positive thing about that film was Tommy Morrison.

I know there’s a big difference in appearance between bodybuilders and strongmen, but Patera is the least intimidating ”world’s strongest man” I’ve seen in wrestling. I mean, I wouldn’t fuck with him but I’d definitely laugh and run away. This is from the same location as last week so Patera encourages the JAILBIRD chants and the crowd is happy to be encouraged. Riki keeps on avoiding Patera but Bruno reckons he has as much chance of beating him as Bruno has of doing fashion walks in Milan. Dull plodding from Ken who doesn’t waste any breath applying bearhugs & crappy elbows before passing out Riki with a Full Nelson.

Winner: Ken Patera (Like last week, the crowd stole the show with their “Jailbird” chants.)

John Tolos reminds us you spell wrestling “T-O-L-O-S” and doesn’t forget he manages The Bounty Hunter. Oh and by the way Dan Spivey has joined Team Tolos.

Orndorff’s still using Can’t Touch This as his entrance music so he’s already the highlight of the night. Starr’s a rotund jobber that tries to out-muscle Paul but that results in him taking a big back suplex early on before getting dumped outside and finished with a stalling Piledriver.

A weird advert for Gold’s Gym plays showing some of the famous people who use their gym like Ken Norton, Carl Weathers, Hulk Hogan and uh Roseanne Barr.

B. Brian Blair (w/Honey) vs. The Bounty Hunter (w/John Tolos)

Ahhh so with Spivey joining Tolos’ stable this is now a GRUDGE MATCH because Blair is feuding with Spivey. That’s some resourceful booking as Spivey is too busy ”sunning in Greece’ to be here this week. Blair sorts out the issues he’s been having with getting boos from the crowd by introducing his skimpily-dressed valet called Honey. The crowd must be a fun of wordplay because they’re suddenly really into Triple B. Blair takes Bounter down with a leg lock and keeps him there for a while, alternating between alternating ankle locks. It goes on for so long Tolos starts insulting the crowd to check their pulse. Tolos suckerpunches Blair so Hunter can get in some offence that’s as easy on the eyes as his red & yellow hood. Bounter misses an elbow off Bret’s Rope and the ref ends up bumped after a dodgy leapfrog. Blair locks in The Scorpion Deathlock but Tolos runs in to twats Blair with a shoe so Honey evens things up by USING A CATTLE PROD on the ass of The Bounty Hunter for Blair to win with a school-boy.

Winner: B. Brian Blair (Bounty Hunter could have been anyone but the crowd is finally into Blair and all it took was an overbearing heel manager and a piece of ass.)

Tolos is disgusted with Bounty Hunter’s loss so he stomps away on him whilst still wearing on shoe. Hunter limps to the back as the crowd laugh at him with one of them audibly yelling ”yah fucking wimp.”

Even more Tolos after the break as he rants away on Hunter, saying ”he couldn’t hunt for Easter eggs” and orders him to take a gun and shoot himself. Christ. 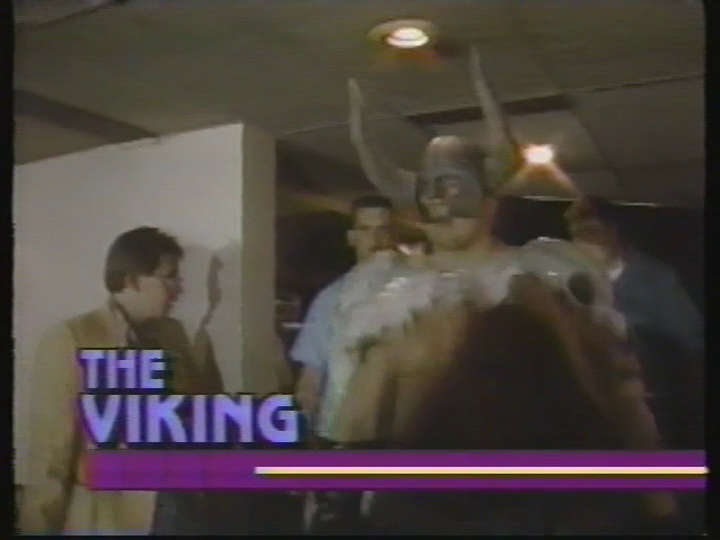 The Viking vs. The Patriot

This’d be the American TV debut of the future Ludvig Borga, Tony Halme. He’d also appear in Die Hard With A Vengeance, Fist Of The North Star, UFC XIII and the Finnish parliament. The Patriot is Davey Meltzer under a mask. Is there anyone Honky Tonk Man didn’t sell that gimmick to? Anyway this is all move-wait-move before Ludvig eventually finishes with a military press and a standing elbow.

Winner: The Viking (If Borga was as interesting in the ring as he was out of it he’d have been someone in wrestling.)

Post-match The Patriot gets stretchered out as Herb gets excited at the thought he can’t breath and may be dying while the sympathetic crowd chant ”911”.

Ivan Koloff talks shit about Nikita, saying he’s so soft now he could be mistaken for an American. Ivan’s stubborn, it’s his old Russian ways BUT HE DON’T APOLOGISE NIKITA, OH NO. Lou feels the need to talk over him and kill the vibe as this grizzled promo gets eaten up by Lou “Brendan Schaub” Albano.

Nikita sneak-attacks Ivan before the bell rings as he’s still pissed about the chain attack last week. Nikita continues his Militia beatings until Ivan dodges a charge in the corner. Nikita gets stretched until Nikita gets a cheeky roll-up but Ivan punishes him with a bear-hug. Nikita tries to drive his elbow into Ivan but every time he gets near, Ivan squeezes some more. It’s the most exciting bear-hug I’ve ever seen and I’m not saying that sarcastically. Usually those things are death or worse, Ken Patera. Crowd is sadly silent when Nikita escapes and mounts an offence, this must have been a long tape cycle. Ivan misses a top-rope knee-drop which is pretty amazing considering he used to bodyguard for Vyacheslav Molotov. Crowd is unwilling to cheer either Ruskie, even with Nikita dropping himself like a pile of dirty clothes whenever Ivan strikes him. Nikita slams Ivan’s legs around the steel post at ringside and the crowd finally comes alive for a Figure Four Leg Lock and…the time limit expires. Both men brawl around ringside like every other main event Herb has pumped out so far but at least Ivan’s a pro though so he takes a chairshot before heading to the back to chew on some rocks.

Winner: No-One (They tried but the crowd were hot and not Russian to cheer Nikita. Ivan’s another legend I’ve enjoyed the more I’ve seen of him. It’s weird how your tastes change over time, I gave up on UWF at this episode last time I tried watching it but now I’m like “woah look at that fucking bearhug.”)

Overall: Herb is very slowly moving to feuds, the crowd is cheering Blair and there was no David Sammartino. Away from the boring tribalism of modern day wrestling Twitter, I’m enjoying this stupid little company so far.