Welcome back to another Dream Matches column! This week we have another “Wait, that happened?” bout from the mid’90s, as Shawn Michaels in the midst of his IC Title (and Diesel’s early run as a denim-clad bodyguard) push takes on Kamala! Next, it’s from that forgotten era of the Quebecers in the WWF as Pierre is used as a jobber for the intense loner rookie Edge! Then it’s the battle of WCW’s “Rick Fuller Division” with the actual Rick Fuller taking on mighty Roadblock! I mean, SOMEONE has to lose! And we end with a WCW Lucha spotfest, as Juventud Guerrera & the deceptively-stocky Silver King take on Kaz Hayashi & Blitzkrieg!

As always, these are taken from YouTube, so you can watch them regardless of whether or not you have the Network.

WWF INTERCONTINENTAL TITLE:
SHAWN MICHAELS (w/ Diesel) vs. KAMALA:
(WWF RAW, June 28th 1993)
* This one was mentioned by fellow poster Moskow, and you just GOTTA review a trainwreck-looking match like this! Shawn is all in black and has his bodyguard Diesel, but Big Sexy is in all denim, looking like the most 1990s guy ever. One version online is SUPER-clipped, so watch the “two parts” version.

Vince, Bobby & Savage debate tactics and Kamala’s intelligence, segueing from “would you let Kamala do your taxes” to Heenan paying only $78 last year (“WITH THE AMOUNT OF MONEY YOU EARNED LAST YEAR?” “I’m barely getting by. I’m supporting an orphanage in Guam, you know”). Shawn suckers Kamala with a handshake and pounces, but gets reversed into the corner and clotheslined. A big chop puts him down again, and when he goes for another handshake, Kamala bites his hand! Shawn tries a comeback after bailing, but eats a slam. Kamala runs into a knee and gets two-counts off of a bearhug, then dodges a dropkick (KAMALA using agility against SHAWN MICHAELS?), actually getting the fans into it. Is isn’t until Kamala misses a knee charge into the corner that Shawn can really come back. Shawn works the leg for a few minutes with strikes, but gets repeatedly shoved off trying a figure-four, backflips off a chop, then sails over the top rope. Kamala, still selling the knee, flips him back in, chops him down… and actually hits his finisher! Splash to the back! But he does the old “tries to pin him on his belly” trick, which finally gets the fans into it, and even HEBNER is trying to get Kamala to roll him over, actually pantomiming that in the ring! But Diesel gets on the apron, and Kamala of course goes for him- Shawn hits the Superkick to the back of the neck for the win (8:50). Kamala tries to get even after the bell, but gets taken down by Diesel and stomped so the IC Champ can leave.

Wow, this wasn’t bad! Like, Shawn did some good bumping, but even Kamala was working at a really good clip, doing great selling and more. Hell, SHAWN was the slower of the two here, doing methodical shots to the knee aside from that bearhug spot. Big vs. Little is tricky context with the heel being smaller, but they did a good job- Kamala looking sympathetic and pathetic by wailing in that knee stuff, limping around desperately after it, and getting cool babyface comebacks with wild chops and running attacks. Sadly, Kamala was being actively jobbed out since Fall 1992 for his babyface turn, and was gone in a couple of months after the murder of his sister.

Rating: **1/2 (shockingly not bad! Kamala gets a bad rap but he’s actually quite spry at this point in his career, having solid experience and a good, if dated, character) 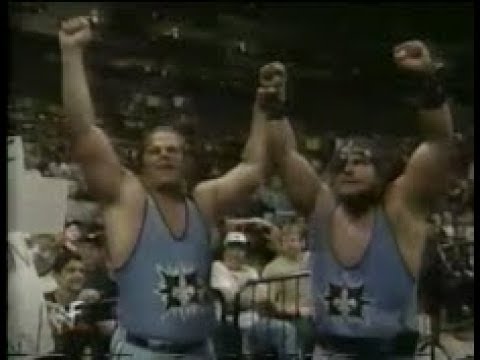 The Quebecers in their strange one-year run with the WWF circa the early Attitude Era.

EDGE vs. PIERRE:
(WWF RAW, July 18th 1998)
* The Quebecers are still farting around but have pretty well just become JTTS losers, as you can see by Pierre (still in powder-blue tights, but now having a Demolition-style S&M collar on for some reason) being fed to the hot new prospect- Edge. Jim Cornette on commentary gives Edge the verbal BJ about how much skill he has despite his youth, and both him & JR play him up as enigmatic, which was pretty well his whole character at the time. They pretty much nailed his look and music immediately, and the crazy production of his entrance video marked him as someone to watch right away- took him a while to put ALL the pieces together, but you could tell this wasn’t just another rookie.

Oh yeah- Attitude Era RAW means “punching and kicking”, but Edge hits a tilt-a-whirl headscissors to put Pierre on the floor, then follows with the Tope Con Hilo! Yeah, he didn’t drop that after murdering Jose with it the week before. Pierre nonetheless just makes a comeback in the ring (yeah, ignoring huge flying moves isn’t a new phenomenon in today’s wrestling), but Edge hits a neckbreaker for two. Pierre catches him with a rolling fireman’s carry and commences to a methodical beatdown- Edge fights out of a chinlock but runs into a big powerbomb. Pierre goes to more boots instead of covering, but hits a Quebec Jam for two. Edge starts no-selling to get fired up for a comeback, but immediately splats on an elbow. Pierre tries his rolling carry again, but Edge slams him into the corner and catches him with the Downward Spiral (at this point basically just grabbing his neck and yanking him forwards- better than the “Give yourself a Rock Bottom” version) for the three (5:05).

Pretty basic RAW match, though oddly a bit longer than they usually were around the AE, with Pierre getting an extended heat sequence, likely getting to dictate the match to the rookie in between Edge’s big, hot moves. Edge had some good emotions immediately, getting the crowd a tad into his comebacks but overall the fans were pretty quiet (it’s a rookie vs. a JTTS, so I can’t blame them).

ROADBLOCK vs. RICK FULLER
(WCW Saturday Night, 3/15/97)
* OH MY GOD IT’S THE BATTLE OF THE RICK FULLER DIVISION! Fuller, a monster of a man with a black singlet with scratchy marks on it, was one of those weird guys who just had nothing else but WCW nonetheless hired him as a jobber for at least 3 years, usually only jobbing him to bigger guys or Luger-type “Strongmen”. Roadblock was generally in a similar role, but was even bigger than Fuller. He’s in black pants and an orange shirt with “Dead End” written on the front.

The two big boys square off, showing that they’re about the same height, and Roadblock turns a test of strength into a bearhug & a pretty great belly-to-belly. That’s good hossin’! He misses an elbowdrop and Fuller comes back, only to charge right over the top rope in the corner in a big bump. Roadblock attacks off the apron and throws him into the post, following with a splash off the second rope… which misses! But unlike his other bouts, does NOT immediately lead to the finish! Roadblock ducks under a clothesline but runs right into a pretty good wheel kick from Fuller, whose arrogant cover barely gets two. Roadblock makes a mystery comeback somehow (was that a shoulder-bump?) and hits a ROLLING SENTON of all things, just flattening Fuller with his ass for two. Tony & Dusty make fun of that on commentary (“he’s watching too many Rey Mysterio matches and forgetting they’s 500 lbs.!”), but Roadblock follows with a big clothesline and the Dead End Drop (falling front powerslam) at (3:08).

HOLY SHIT THIS DIDN’T SUCK! I mean, Roadblock is nobody’s bargain but they both moved at a good clip and hit “only big moves”, just slamming into each other. Fuller seemed like he was showing off and angling for a push, poor bastard, flying over the top rope and moving pretty well for a dude his size.

LUCHA TAG RULES:
JUVENTUD GUERRERA & SILVER KING vs. BLITZKRIEG & KAZ HAYASHI:
(WCW Thunder, 10/21/1999)
* Weird match as Juvie gets paired up with Silver King (looking like a complete douchebag with his tough-guy vest and shades while drinking water) against Blitzkrieg & Kaz Hayashi of all people. Just a totally random “grab-bag” Cruiserweight match. According to Cagematch, this ends up being Blitzkrieg’s actual final match EVER, as he retires to work a real job. Juvie’s in black & yellow, King’s in mostly black, Blitzkrieg in red & black, and Kaz in his half-black/half-blue tights. I forgot how roided Kaz was- he was like a Benoit that shrunk in the wash.

Blitzkrieg nails Juvie with the Sean Waltman kicks and sends him away, then does his spinning victory roll on SK. King catches him with the “Eddie bump” off the ropes and hits a somersault legdrop. The crowd heat here is HILARIOUSLY overdone, making it sound like a full-blown riot is breaking out over this obvious curtain-jerking match. Kaz & Juvie do a fun bit, tearing around, taunting and chopping each other, and Juvie hits a DDT. Blitzkrieg helps Kaz come back on King, and they hit an assisted kick after faking a tag. They desperately try to stop a hot tag, but King hits a helicopter slam on Blitzkrieg & Juvie comes in with a double-crossbody and headscissors, only Blitz lands on his feet from a spin and hits a somersault enzuigiri. Hart Attack-style dropkick off the second rope keeps him down, and they hang him in the corner for another ass-kicking. Kaz hits a tilt-a-whirl backbreaker and holds Juvie there for Blitzkrieg’s springboard guillotine legdrop. They milk the spot for a while, Blitz taking his time trying for a pin, then he hits a slingshot somersault senton for two.

Juvie gets two comebacks, but both are stuffed until he hits a double-wheelbarrow bulldog- double missile kick and kip-up by Silver King off the hot tag! Tilt-a-whirl backbreaker to Kaz, but Blitz flips him over on one, and they do an ugly struggle into a sunset flip, clearly not being on the same page. Hah, then they re-do things so they’re in the right position- Juvie flies off with a springboard cross-body when Blitzkrieg tries a powerbomb. The ref for some reason counts this as a legal tag, but Kaz hits an inverted suplex on Juvie to the outside and follows with an Asai Moonsault while King catches a flipping Blitzkrieg with an electric chair drop. Moonsault follows, but Kaz breaks it up- King tries to finish with a powerbomb, but Kaz flies in with a missile kick that puts both guys on the floor, cueing Juventud to fly off the top with a spinning Hurricanrana, and finishes Kaz with the Juvie Driver at (10:28).

Perfectly fine tag team match, with Blitzkrieg & Kaz mostly working heel and keeping on Juvie for the most part. Though Blitz/King got ugly in there for a bit (probably miscommunication and Blitz getting overly-spinny), and the rules were pretty haphazard (you do “prevent the tag” spots but it’s okay to just fly in there off the top and now you’re the legal man?). They crammed a lot of stuff in there, but weirdly not much was done to Kaz at all until Juvie caught him for the win. If they’d known this was Blitzkrieg’s final match, maybe they should let him eat the pin- I dunno.