We’re in Little Rock, which I think is currently airing on NBC.

MVP is curious about his Rookie turning on him last week but he isn’t mad because he’s happy Percy showed initiative. Percy says he respects MVP and he sincerely apologies for last week. They shake hands and it’s all water under the bridge. Well if you’ve seen a second of wrestling you’d think this would be a set-up for something but a quick check shows us that…this was it for the Percy turn and it was never spoke of again. Huh. Striker interrupts and wants to know why Percy should be voted #1. MVP asks the crowd and it’s a mixed reaction on account of him TURNING ON MVP and then APOLOGISING LIKE A BITCH. Cody Rhodes interrupts and is given a minute to hype up his rookie Husky Harris. 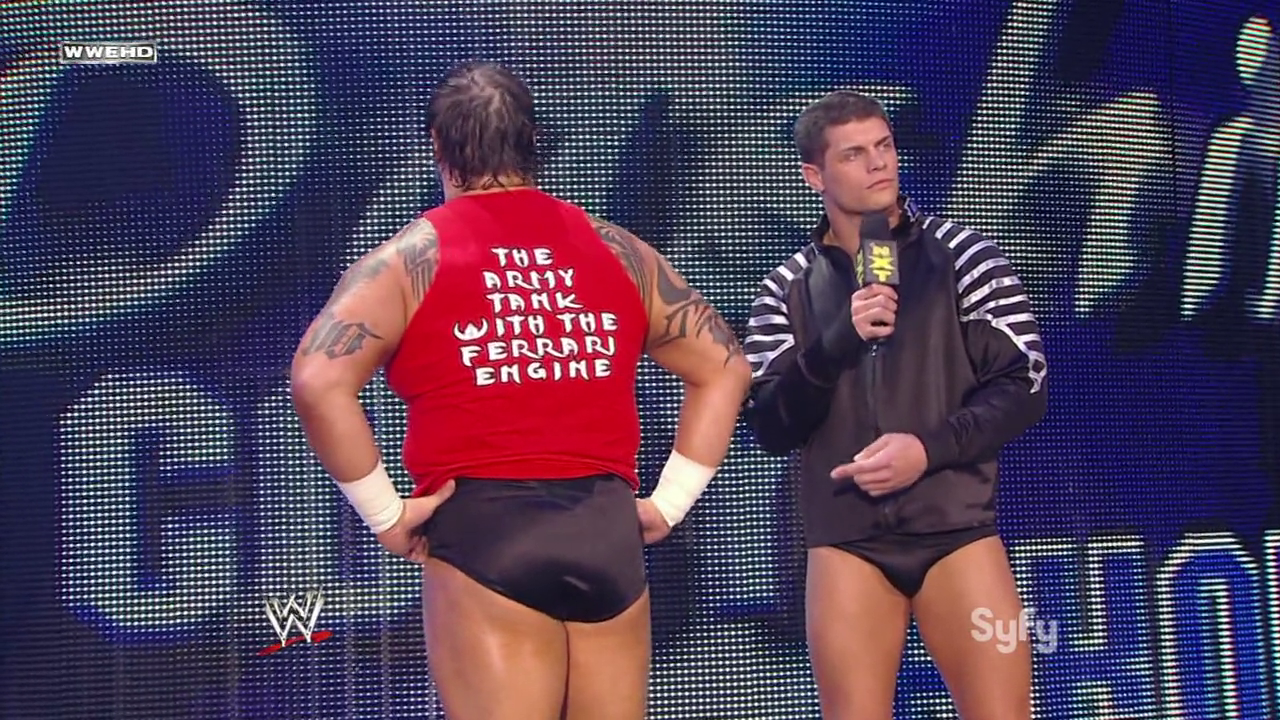 Crowd instantly boos Cody so he has to pause for it to die down, so he tells Striker “Don’t count that.” Ha!

MVP and Percy work over Husky and work as a cohesive unit. The thing about these matches is that they’re kept so basic that you end up knowing what’s going to happen minutes before it happens, so I always worry when it comes to typing these matches up because I’m not good enough to make “Husky gets worked over then Cody & Husky dominate” sound interesting. Cody’s firmly in his Dashing phase and not wearing knee pads so I can type about that I guess. Percy makes the hot tag to MVP but Husky sticks his Ferrari Engine into things which allows Cody to nail the Disaster Kick and it’s over after a Husky running senton.

Mark Henry took on Wade Barrett on Raw but after getting distracted by Nexus uhhh appearing on the ramp and doing nothing, Wade is able to deliver Wasteland to Mark.

Lucky is Pro-less for this match as a result. He’d be career-less in a year’s time so don’t worry about it. Riley has The Miz who has just won the Money In The Bank briefcase. So weird watching ECW on Syfy and NXT after all these years and finally seeing Miz turn into the guy he is now. Riley just wipes the floor with Lucky and ends him with a TKO because Lucky’s gimmick is that he sucks. Miz fakes going to hit Lucky with his briefcase but then decides “ah go on then” and smashes his face into it with the Skull Crushing Finale.

And “skull-crushing” is right as Lucky absolutely ate shit on that.

Raw Rebound: Sheamus retained against Cena on Sunday because The Nexus helped him out. So Cena wants to know what they want and Wade tells him they want Cena to join them. Cena declines so Barrett promises to destroy him. Cena says no I have a team which brings out Edge, R-Truth, Khali and BRET FUCKING HART to even the odds.

Michael McGillicutty nails it in 26.7, even if his push ups were questionable.

Alex Riley slips off the balance bar and has to settle for 40.3.

Eli Cottonwood dies a death trying to land over the walls, can’t fit in the square for the push-ups and then flubs so the balance bar so he charges the refs and gets disqualified while John Morrison tries not to laugh at his Rookie fucking up yet again.

Lucky gets 28.0 despite having a broken face.

Kaval does push-ups on his fists like a man but the big box is too big for him to push. Percy also can’t beat it because he’s not wearing his glasses.

Finally Husky smashes down the barricade rather than try to vault it, which should be part of the actual challenge. Striker doesn’t acknowledge his time or run and tells everyone to vote for the next elimination but don’t bother voting McGillicutty because he has immunity ALRIGHT GOODBYE EVERYONE. 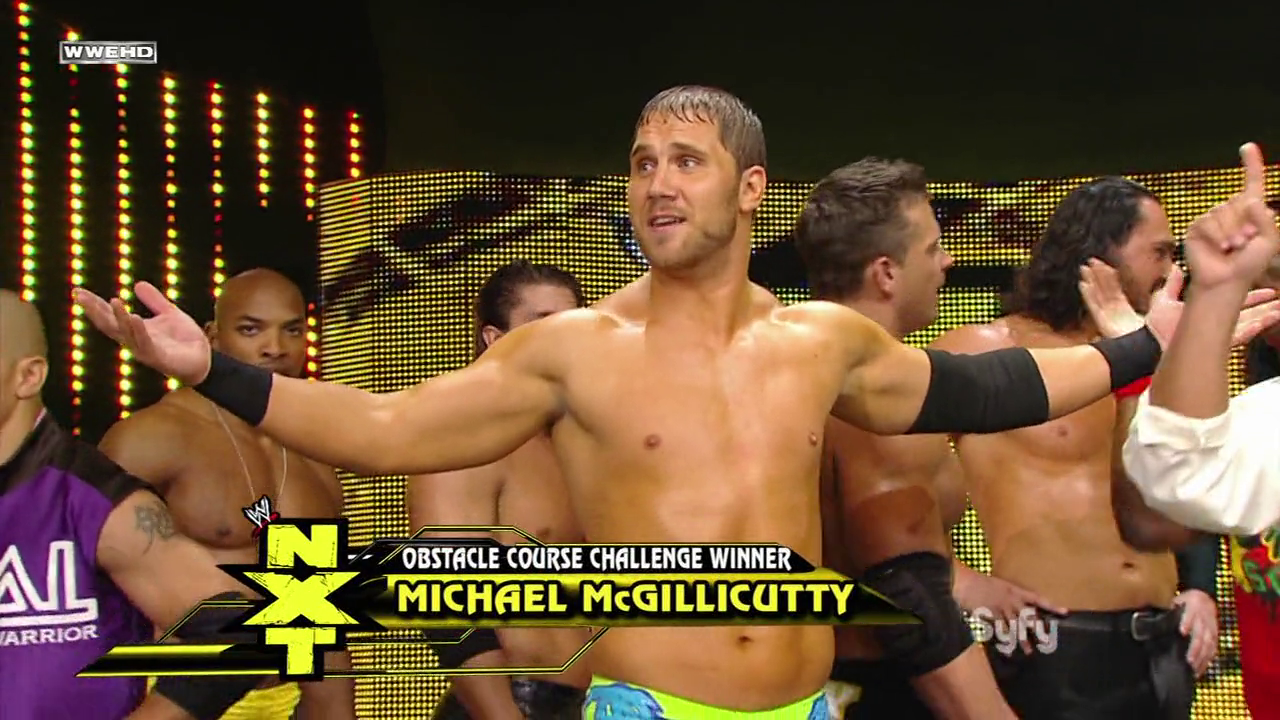 Overall: The initial allure of “oh hey it’s that guy before he got good” has long-worn off and I’m bored of typing about this and trying to make these sound somewhat interesting. I’ll watch until the rest of this ‘season’ then fuck it off and watch something else.