Well hell! This one just became a bit more timely! I had this set to post NEXT week, but when Christian was the disappointing “Big Reveal” at AEW Revolution, the serendipity of already having this review written struck me, and I moved it ahead! AND we get to see late ’90s Stevie Richards AND PWI’s favorite son, Reckless Youth- he’s set to be a breakout star ANY DAY NOW, don’t you see?

ECWA HEAVYWEIGHT TITLE:
FOUR-WAY (two men in the ring to start; another in 4:00, the last in 9:00), NO DQs OR COUNT-OUTS:
CHRISTIAN CAGE vs. STEVIE RICHARDS vs. RECKLESS YOUTH vs. “SUPERSTAR” LANCE DIAMOND:
(ECWA, Nov. 11 1998)
* !!!! Holy cow, what a find. Christian Cage shortly after he was hired for his life-changing role (who’d have guessed that “silent fake brother of Edge who swiftly becomes a low-tier nobody” would have ended up giving him such longevity?) while still an Indie darling getting hyped in the pages of PWI (I remember when he was their Indie Wrestler of the Month!). (Edit: He was apparently actually working both companies for a bit, and was the ECWA Champion AND WWF Light Heavyweight Champion!) Stevie Richards is between his ECW & WWF runs, after he was dumped from WCW and was I think injured, farting around the indies until he could get another gig (this would be one of the indies he farted around in, I guess). He’s in one of his distinctive super-belly shirts, coming down to “Louie Louie”.

Reckless Youth, the GOD of PWI Hype, is also there, in his “I can’t afford good gear” Generic Indie Loser black shirt & jean shorts (he dresses like a fat guy at the pool, but actually has a decent physique- I don’t get it). And then there’s Simon Diamond, also an ECW guy, in white trunks. Here he’s called Lance Diamond and comes out to “Jesus Christ Superstar”, which is, as always, AMAZING theme music for an arrogant wrestler. Christian is shockingly already decked out in his WWF gear (sunglasses, “gothic lifestyle” puffy shirt, purple tights) and acts unemotive. This is filmed via hand-cam.

Diamond & Youth start us off, doing a generic headlock sequence ending in uncoordinated landings for the “ECW Pause For Applause”. Another generic sequence sees Youth hit a discus clothesline, but get dropped on the turnbuckles, so Stevie runs in and they double-team Diamond. Stevie oddly walks in for more stomps when Youth tries to whip him in, but then do a Bronco Buster attempt, Stevie missing. Youth hits a back elbow off the ropes while Stevie sells his nuts for several minutes- Youth goads him into doing SOMETHING, so he does an elaborate People’s Elbow riff, bouncing off the ropes… right into Youth’s clothesline. So Youth does his own elaborate set-up into one… but of course Diamond (who’s been lying there for like 2:00) just dodges it. They throw slow punches for a bit, Stevie & Diamond beating Youth down- now Stevie tries a People’s Elbow on HIM, but instead launches himself into Diamond in the corner, THEN hitting the elbow. That gets two, then everyone trades off on each other until it’s a three-way punch for a triple-KO.

Christian finally makes his way down, and hits a flying cross-body on all three guys, then they stumble around throwing shots- Christian clearly doesn’t know he’s hit by a double-clothesline, because he sells it like a normal punch. He does a dropkick reversal to Youth/Stevie, but gets dragged out by Diamond- they fight, but Youth flies out with a Springboard Cannonball Suicida! Stevie gets an awful pescado to all three guys, and everyone sells death. Christian does rolling vertical suplexes into an X-Factor on Youth- Diamond saves. Stevie hits a flying axehandle, but Diamond pulls him off and tries to pin-steal. Youth calls out for a low blow, then does it (I mean, it’s no DQ), hits a Perfect necksnap, and he & Diamond keep throwing shots & pin attempts on Christian until Diamond gets mad about “messin’ up my pins” and takes the single worst bump off of an Inverted DDT I’ve ever seen. Like, holy shit, he just fell sideways like he tripped while Christian was trying to drill him. Youth pulls Christian off and hits an STF- Stevie breaks it up. Then… a QUADRUPLE SLEEPER SPOT? They were doing that in 1998? Youth drops down to jack three jaws at once. He then hits a NORTHERN LIGHTS BOMB on Diamond, then ties him up in the Delfin Clutch for two- Stevie boots him. Yeah, okay, dude has some Japan tapes.

Christian & Stevie hit a Double Inverted DDT on Youth, then Christian has to deal with Stevie- he scores a dropkick, but puts his head down and eats a Kneeling Powerbomb for two while Diamond recovers and takes on Youth, hitting an Overhead Belly-To-Belly Superplex. Two guys try pins off of that, then everyone brawls aimlessly for a minute until Christian hits a Falling Powerbomb on Stevie for two. Powerslam gets two- Diamond breaks it up and hits a Sit-Out Spinebuster for two. Youth grabs Christian in the STRETCH PLUM- Stevie dropkicks him. Diamond takes Rolling Germans from Youth, but they reverse on each other and he hits a Northern Lights Suplex for two. Christian breaks it up but turns around into a Stevie Kick- two! Diamond breaks it up so Stevie pulls him out. Youth hits a BIG Frog Splash, but the ref is distracted, so he can only get two. Diamond comes in and they try a double-team, but Stevie drags him out like a dumbass, and of COURSE that’s the finish, as Youth stumbles in, Christian reverses to the Unprettier, and retains his title at (18:06).

Wow, the “Cutesy Indie Spots” was strong with this one, with the main Title of the company being defended in a match with guys doing goofy People’s Elbow riffs for several minutes, comedy spots, a triple-KO, etc. Diamond was HORRIBLY generic for the entire thing, then fucked up the Inverted DDT spot later- he comes off like a low-tier WWF jobber, not a “featured guy”. Stevie seemed very hesitant and clumsy, too, possibly because of injuries. Youth actually seemed the best, albeit like a guy who took a “Best of Japan” VHS from 1995 and made that his entire style. But like… how much of the 2000s Indie Class that changed the American style for good did the same thing? Dude was WAY ahead of his time! Honestly, the match was pretty “bleh” and uninteresting until the last 7-8 minutes, when it was four guys trying all their shit to pin someone- I got into it for that, as I dig that kind of psychology as everyone lies in wait to hit their thing while the others can sell. It makes up for a lot of the awkwardness of other spots and waiting around for others to do something. It’s very much in that “ECW Four-Way-Dance” style, and popped up a lot in the indies from reviews I’ve read.

As far as I can tell, Christian left for the WWF while still champ, vacating it.

Rating: ***1/4 (actually got pretty good in the end when it was just guys throwing out all their best stuff to get a win) 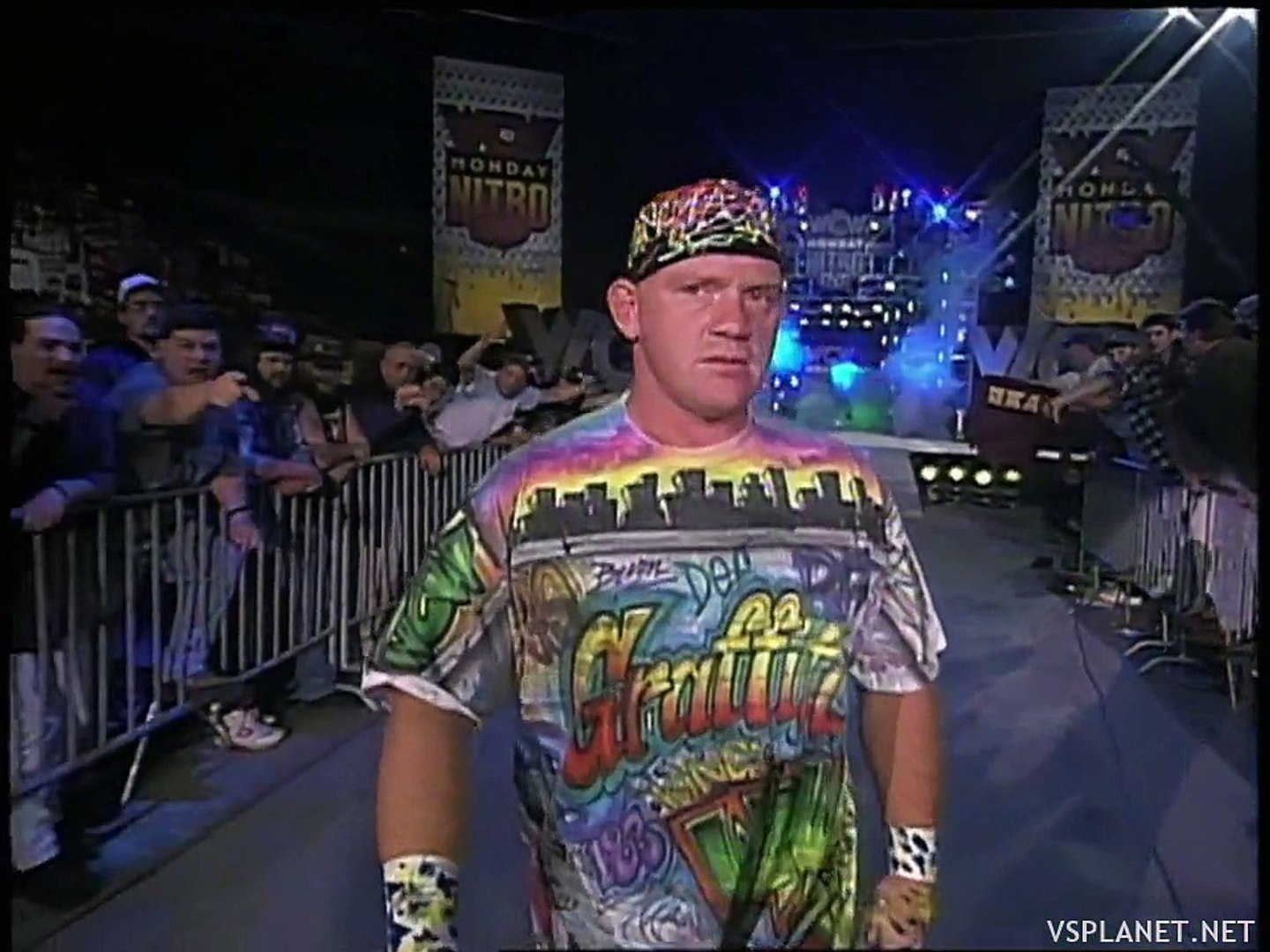 Because when I think young urban street artists, I think of doughy Southern wrasslers.

CHRIS JERICHO vs. JIMMY GRAFFITI:
(WCW Worldwide, 1996)
* Welcome to the sight of “Gigolo” Jimmy Del Ray, old and flabby, decked out in what I can only describe as Steve Buscemi’s “Greetings, Fellow Kids” outfit 20 years earlier. He was a WCW Jobber from 1996-97 or so and disappeared quietly. Baby Jericho’s in silver tights and comes down to his AMAZING instrumental theme song and still a peppy young babyface.

Jericho amazingly hits a Lionsault Press in the opening seconds for two. Slam, hiptoss & armdrag, but Graffiti hits an elbow and dodges a corner charge. Graffiti hits a backdrop suplex for two as Bobby Heenan suggests that Jericho looks like the kinda guy who walks along the beach kicking sand in people’s faces, much to Tony Schiavone’s disgust- “He is a NICE young man- a real gentleman!” making Jericho out to be the biggest dork in the entire universe. Superkick connects as Heenan adds “You know his dad was the first women’s hockey goalie?”, then jokes that he’s deaf and can’t hear him- “Hey TED IRVINE- you’re a DUMMY! AHAHAHAH”. Graffiti hits a Ligerbomb for two. He tries another, but Jericho flips out of it and hits a superkick of his own, only to eat a jawjacker and miss another corner charge. Graffiti misses a cannonball off the apron by a mile, so Jericho tosses him into the ring and hits a Missile Dropkick… for the win (3:25)!

Wow, this was so early in Jericho’s career that he hadn’t established his finisher yet. Classic 1996-era Jericho match, as they don’t quite know what they have with him, so they do this “Plucky Babyface” character and he spends most of a match taking offense from Jimmy Del Ray. At least it was good stuff, though- I can imagine watching this in ’96 and being stunned by huge moves like a Sit-Out Powerbomb at that point in time.

LOCH NESS (w/ Jimmy Hart) vs. MARCUS BAGWELL:
(WCW Saturday Night Feb. 24 1996)
* Loch Ness is terrible UK wrestler Giant Haystacks, billed at 679 lbs. as part of the Dungeon of Doom. He’s wearing an Army Surplus Store onesie, from the looks of things. Bagwell at this point was still part of the American Males, in kind of “limbo” between pretty-boy pushes- he looks like a douchebag early-90s preppie, here.

Bagwell tries punches and clotheslines, but Loch Ness doesn’t budge- Tony & Dusty on commentary deride his strategy, but Bagwell eventually gets him to sell in the corner. He climbs up for the ten punches, but the big man eventually just grips him and throws him back- Bagwell sells so long Loch Ness can run in and launch himself with a terrible elbowdrop, actually scoring the pin (1:30). Ooh man, poor Buff- did all that and got the “Jobber Ending” in only two moves. 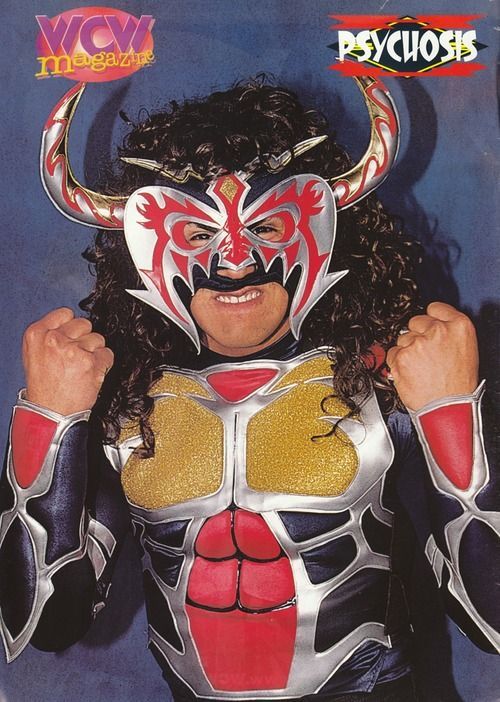 PRINCE IAUKEA vs. PSYCHOSIS:
(WCW Main Event, Aug. 11 1996)
* It’s Prince Nakamaki! Who… I usually skip his stuff. He’s that unusual combation of shitty but bland enough in his shittiness that he’s not even interesting to make fun of- future wrestlers, don’t make Charisma your dump stat. This is when he’s green as grass and hadn’t gotten his push yet. He’s in white tights, while Psychosis is in probably his UGLIEST gear- a black bodysuit with gold “armor” and pink & orange bits on it.

Psychosis hits a Manami Toyota “dropkick reversal” out of a running sequence, then a Flying Wheel Kick for two. Wow, right to big moves. Lee Marshall says Rey Mysterio defeated “The Ultimo Warrior” while Psychosis gets clotheslined over the top. Iaukea does the dumb Polynesian Martial Arts chop- missile dropkick gets two. Northern Lights suplex gets two. Psychosis comes back with headbutts and a corner lariat, but misses the next one by a mile and Iaukea does chops until Psychosis ducks one and hits a wheel kick. Weak kneeling powerbomb sets up the… corkscrew senton? Okay then. That’s the end at (3:32).

Iaukea is the weirdest guy. All his stuff actually looked good and was smooth, but he’s a solid “0” in charisma, just kind of doing stuff because he knows how to do it and that’s it. Psychosis was near the “Rey/Juvie” tier at this point, and hit some good stuff, but was wrestling very lightly and not making much impact.

Rating: * (better than your typical Jobber Match, with good-looking moves from both, mostly dominated by Psychosis)