We start off with a dramatic super-serious recap of Nexus’ amazing beat-down before Matt Striker puts on his best serious voice as he describes yesterday’s beat-down as “bombastic” before wondering if the next bunch of Rookies will protest the WWE.

Hey let’s meet them and find out!

Miz loves his Rookie, Cody isn’t thrilled with his. Lay-Cool stroke Kaval’s head and make him carry their title(s), causing many indie wrestling fans’ heads to explode. The Pros have gone from former World Champions and veterans to “mid-carders who aren’t going to complain about working another day” but the crowd reacts for most of them (especially MVP).

Striker says this season will only be twelve weeks long and the voting will be split between the Pros and the fans, so at least they’re trying to fix some of the issues from last season. The Rookies shove one another and we cut away before anything interesting happens.

Eli is uncomfortably big. He locks in a really loose headlock on Titus who reacts by knocking him down and introducing us to the seal yell. Crowd approves of it. After the break, Morrison takes out Ryder with a beautiful spinning kick before being gentle with Titus. Eli dunks Ryder out the ring allowing Morrison to land Starship Pain to win.

Winners: John Morrison & Eli Cottonwood (Like a Ramones song this was quick and painless. Mathews puts over how intense Eli was after one bad headlock and a big boot.)

Miz says both men failed to leave an impression and Eli says nothing but looks bee-stung.

Promo Package for Alex Riley. He plays a jock prick very convincingly, I wonder how.

No-one’s getting entrances, it’s just HEY HERE’S A TAG MATCH. Last night Dusty dropped an elbow on IRS which is a hell of a way to segue-way into both their kids teaming up the next night. Percy’s a camp powerhouse so Cody has to tag out to Husky, who has his football and scuba-diving credentials put over by Cole. Husky lands the big back senton to pop the crowd and Percy’s lungs.

Husky’s inexperience is shown as he bumps the wrong side of the ring so MVP has to slam him facing the hard cam so he can deliver the BALLIN elbow drop. Cody tries sneak-attacking but Percy yells “Hey MVP there’s a dude jumping off the top rope directly in front of you” which MVP replies “oh yes I see him, thank you Rookie I wouldn’t have observed that if you hadn’t told me” and he boots Cody out of mid-air. MVP shows his appreciation by letting Percy tag in and get the pin.

Winners: MVP & Percy Watson (Started a bunch of basic stories so I couldn’t hate it.)

Cody says Husky looks familiar, he reminds him of this ugly crowd and his ugly family. So they’re this season’s Regal/Ryback. 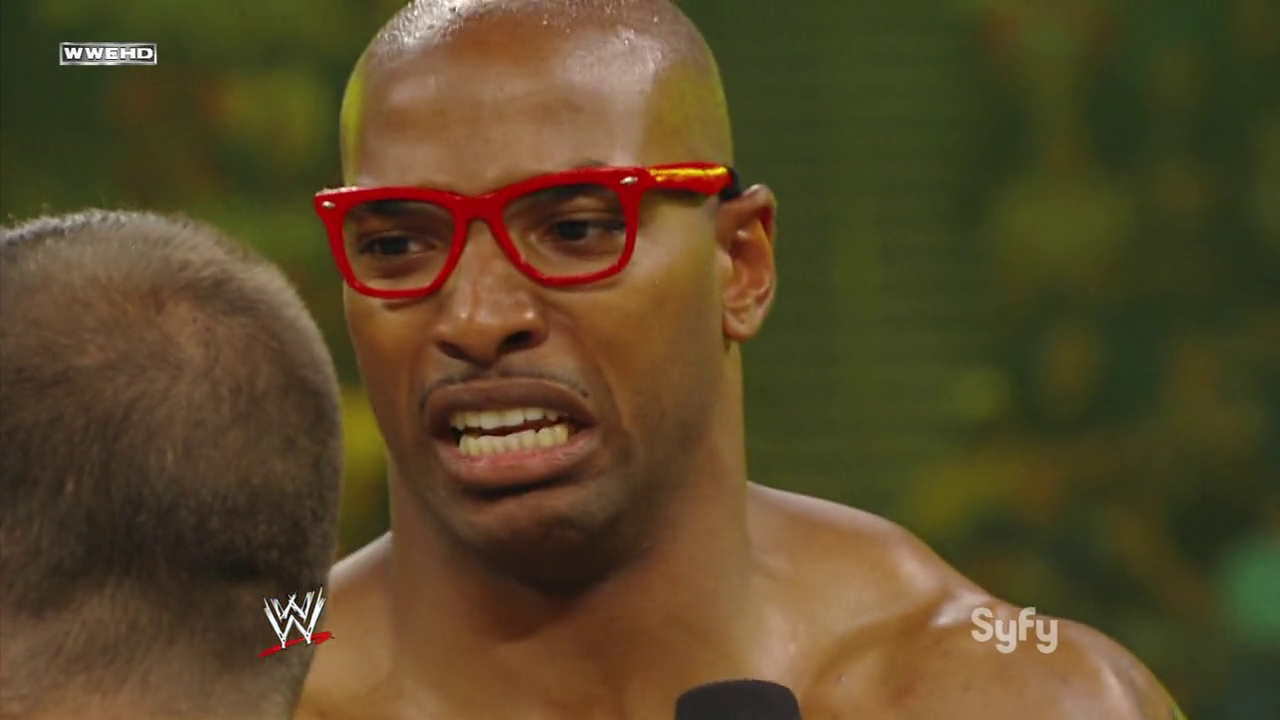 Michael McGillicutty gets a promo package, back when he was allowed to mention his famous relatives. Christ, imagine growing up with a Grandad called THE AXE.

We get a long, long look at the Nexus attack in all it’s glory with the tie and spit moments cut out but you’ve been good so here they are.

Striker asks the Rookies what they think. Kaval says “ that’s how you make a statement in WWE”. Lucky Cannon agrees, Husky doesn’t care because he’s here to win and that’s it. Riley sneezes on Striker and tells him to get away because he’s allergic to him, making him my current favourite of the show.

Titus says he wants Season One to come fight them and “if you’re going to fight…make it a fight. If you wanna win…make it a win.” Michael immediately mocks Titus for stumbling over his lines like it’s the ramp at Saudi Arabia. There’s a big, forced brawl and Titus takes the World’s Strongest Slam to end the first episode.

Overall: Eh, it was what it was. First episode in a twelve-week story isn’t going to be balls to the walls but at the same time it was hard to care about anything when they were focusing on one of the highlights of the year…that isn’t going to have any impact on this Season.

Still, it’s interesting seeing guys like Husky starting off all young and naive, knowing where they’d end up.

I’ve been Maffew, go check out this compilation of Botchamania Guest Readings from 2020 because it looks like I’m a bigger deal than I am.