It’s been several weeks of nothing but we’re finally here and thankfully Daniel Bryan gets a positive reaction during the Rookie Roll Call. Striker reminds us that all the Rookies were in a multi-man match on Raw that shockingly ended with Bryan rolling up Santino for the win to make him the first NXT dude to get a victory on Raw. Who’d have thought a roll-up involving Santino & Bryan would mean anything?

Striker reminds us that Tarver said Tarver should be eliminated this week and because he doesn’t believe in himself, he has been eliminated and could he kindly leave the arena. Cole: “I can’t say I’m surprised.”

Striker also reminds us Bryan said the same thing and because of that, he too has been eliminated. Cole is dumb-founded because Bryan was #1 in the Pro-Poll and was the darling of the internet. Striker says don’t worry, there will be a Pro Poll tonight and the person at the bottom will be voted off tonight too! Cole has to clarify (while sounding surprised) that the Pro-Poll didn’t eliminate Bryan & Tarver, WWE management did.

Slater the high flyer of the highest magnitude takes Barrett out of the ring but Barrett dumps him into the barricade in response. Commentators are stressing it was the comments Bryan & Tarver made about themselves that got them removed, not the Pro Poll. I mean Tarver was clearly saying it in a cool way (“I should be voted out so everybody else is safe”) but I don’t know if WWE was getting mad with him slowly getting over while not actually doing the challenges. Slater dives off the top into the waiting arms of Barrett to lose via Badlands.

Striker asks Tarver backstage if he thought the ruling was fair. He looks sad and thinks the ruling was fair but the contest wasn’t. Tarver’s made a career of turning crumbs into banquets but he doesn’t answer what his future plans are. Striker can barely hide his smirk as he tells him “Best of luck in your future endeavours.” Tarver wrestled like he’d just shit himself but was a good promo.

Mathews yells at Cole for saying positive things about Bryan now he’s gone so Cole mocks Young for getting his hair spiky by washing it with berries. Skip does his powerhouse stuff as the crowd falls asleep. Young pumps his arms and goes YEAHHH, no one cheers and then Skip ends it with the backpack stunner.

Winner: Skip Sheffield (Crowd treated Young like a gallstone and were only happy when he was gone.)

SMACKDOWN REBOUND: A young, smooth Drew McIntyre kicked Matt Hardy’s head into the ring steps so now Matt is back against Doctor’s orders for revenge. Drew laughs because he’s The Chosen One (*harmonica*) and beats him down until Teddy Long suspends him. He refuses to stop so Teddy strips him of the IC Title. This still doesn’t stop him from attacking Matt so Teddy FIRES him and has him thrown out of Smackdown. They announce the finals of the Tournament to decide who becomes the next IC Champion but if I remember right, Kofi won but Vince McMahon said Teddy couldn’t strip or fire Drew because he’s The Chosen One (*harmonica*) so we got the sweet Kofi vs. Drew feud for the next few months because Smackdown was about a thousand times better than Raw & NXT in 2010.

Here comes the promo: Bryan doesn’t make excuses and if WWE thinks he should be eliminated then fine. Striker then asks Bryan if he regrets being a big fish in a small pond on the indies only to DROWN in WWE? Jesus what a question (and Striker really punctuated DR-OW-NUH). Bryan says if you go on YouTube, you can’t find any “Daniel Bryan” matches but Striker tries to cut him off by asking what’s next. Bryan doesn’t hesitate and carries on to say he doesn’t know what’s in store for Daniel Bryan…but the future’s bright for Bryan Danielson. Crowd pops for the name-drop, as did half the internet that was still watching this weird show in 2010.

Cole explains there’s no Pros at ringside because they’re totalling up the Pro Poll. I mean Regal was out here for Skip’s match but who cares? Not this crowd that’s for sure, as Gabriel does the rookie WOOOs but none of these matches mean anything and everybody’s waiting to see the next elimination. Gabriel powers out of a Abdominal Stretch to nail some clumsy kicks. Otunga front suplexes Gabriel over the ropes then dumps him with the Spinebuster to win.

Winner: David Otunga (Otunga looked better than Gabriel and that’s not a compliment.)

The remaining Rookies line up outside the ring and answer who should be voted off and the replies aren’t worth typing up as Striker tries his best Stephanie McMahon impression and cuts everyone off when they try to do or say anything interesting. Eventually the Pro Poll gets read out and Skip Sheffield is last.

Skip thanks Regal and says he should have listened to him but it’s OK because he’ll be (Ry)back.

That’s a wrap and next week someone else will be voted off with Striker emphasising the seriousness of the situation by playing with Darren Young’s hair as the show goes off the air. 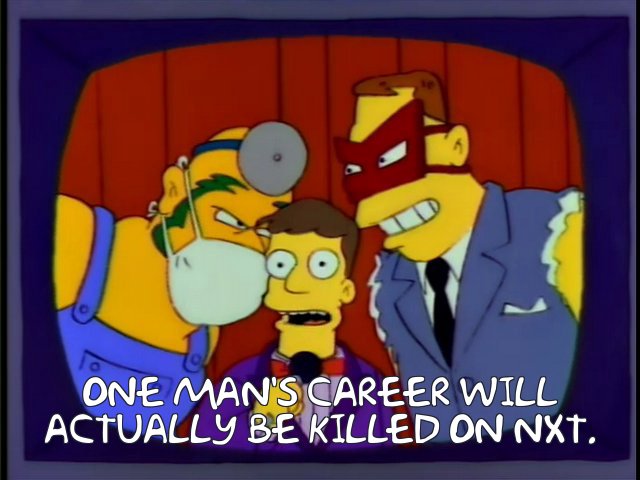 Overall: A brutal show to watch but a fascinating look into the truly bizarre world of WWE in the 2010s.

Here’s Daniel’s thoughts about this episode:

When it was time for the first elimination the following Tuesday, we were told to line up by the ring before the show started, again without being told what was going on. Striker came out and reminded the fans that the previous week he asked us who should be eliminated. Michael Tarver had said himself as well, with his justification being everyone was safer without him around. Striker then said, “WWE management feels that if a Superstar does not believe in himself, then how can anyone believe in the WWE Superstar?” And with that, he told Michael Tarver he had been eliminated by management.

After Tarver exited, Striker walked slowly down the line toward me. They replayed the video of me saying I should be eliminated, and I knew what was coming: Striker announced that I was eliminated as well. As I slowly walked up the ramp to exit, a million things were going through my mind, but the one that kept sticking in my brain was that WWE did this to prove a point. All the things I’d heard from guys like Colt Cabana about WWE’s negative feelings toward independent wrestlers seemed to be confirmed. Given that I’d been the flag bearer for independent wrestling over those last few years, it all of a sudden made sense why they would mock me on the show, despite me being one of the best performers. Then I thought they might just fire me after this and I’d go back to the independents as a failure.

When I walked through the “Gorilla position” (the space immediately on the other side of the curtain, named after Gorilla Monsoon), I was informed I’d have an interview with Striker after the commercial break and that I should just answer however I felt was right. The interview started off fine with a fairly
harmless question from Striker about whether I thought the whole thing was fair. I knew Matt was fed his questions by producers and probably Vince himself, but the second question was insulting. He asked, “Do you regret leaving the independent scene, where you were a big fish in a small pond, to ultimately drown in the sea that is the WWE?”

Fuck you. In no way, shape, or form did I “drown” in WWE. I was booked as a loser and was still the most popular guy on the show. This only confirmed to me what I thought coming up the ramp. But I answered relatively calmly. “Well, that’s funny, because ‘Daniel Bryan’ never wrestled on the independent scene,” I said. “If you go on and YouTube ‘Daniel Bryan,’ all you ever see is WWE. But there was this guy, man, he was out there, he was kicking people’s heads in; people called him the best wrestler in the world. He was a champion in Japan, Mexico, and Europe. And do you know what his name was?” Before I could say it, Striker cut me off, saying, “What’s next, for this guy?” I could practically hear the yelling in his earpiece, but I continued on. I downplayed the skill of “Daniel Bryan,” saying that guy couldn’t even beat rookies. And then I said it.

“‘Daniel Bryan’ might be done, but Bryan Danielson—God knows what’s going to happen to him.” When I said my real name, it actually got a reaction from the fans. It got a reaction from Vince as well; apparently, he threw his headset. I was in the frame of mind that if I was going to get fired, I was at least going to plug my own name before heading back to the independents. But because NXT wasn’t quite live (it was on an hour delay), they made me redo the interview, and Striker asked different questions. When the show aired, however, they played the original on TV. Vince must have changed his mind in the meantime.