The crowd is merciless and even super-faces like Bryan & Slater receive boos. We’re three weeks away from Pro Poll II: Poll Harder and to help the veterans decide on who to vote for, this week we have…Rock ‘Em Sock ‘Em Rookies. 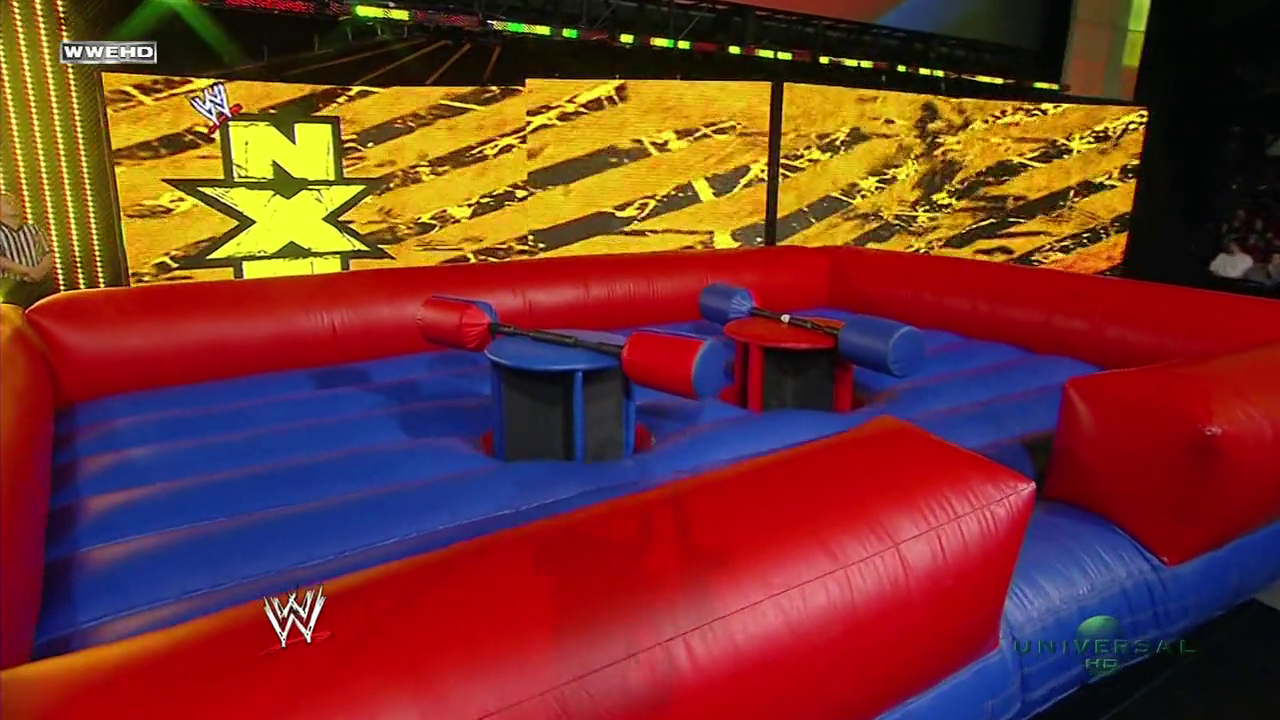 Winner gets a feature written about them on WWE dot com. That would have been during Joey Styles sweet run as Site Manager so I’ll try finding it after the Hot Stick Action.

Round one sees Slater defeat Otunga (**3/4), Bryan squash Tarver after he quit (DUD), Young vanquish Gabriel (*1/4) and Sheffield triumph over Barrett (*****) in the best match to happen on NXT so far, just for this finish.

The win-loss records are back after a week. Otunga uses his boulder shoulders to keep the advantage, but shows improvement by begging off Gabriel and then pinging the middle rope into his eyes. Crowd begrudgingly gets behind Gabriel and he rewards them with a headscissors and a Tope Con Hello to the outside. Otunga responds by catching him like he’s delivering a powerbomb, he should have had Miz as a Pro. Otunga rolls away from a 450 Splash and tricks Gabriel into coming to the ropes, but Justin turns it into a Sunset Flip. R-Truth refuses to assist Otunga and walks away from his Rookie as he gets pinned.

Winner: Justin Gabriel (5-2) (Otunga is getting better because he’s not getting worse.)

In the semi-finals of the Inflatable Gladiator Stick Fest, Sheffield eliminates Slater (***) and Young upsets Bryan (****) which kickstarts Cole’s Soapbox about how much being a vegan sucks.

Tarver comes out with his Carlito to tell the crowd he’s done being overlooked. This bulldog is off his leash and he’s not here to do Rock ‘Em Sock ‘Em, he’s here to wrestle anyone who wants a fight. This was a decent promo that was getting a healthy reaction from the crowd so of course Cole & Mathews laughed over it.

Skip answers the challenge because Regal’s stuck in Europe. CM Punk decides to volunteer Darren Young for a match seeing as he defeated Gallows last week.

Oh now the win-loss records have gone again. This is the first three-way on the show and hopefully it’s not asking for trouble. Young gets double-teamed but immediately takes his larger opponents out of the ring to send us to break and when we’re back, he’s getting double-teamed again. Huh. Crowd switch off as Young takes a bunch of basic power moves. Rocksteady & Bebop start arguing over who’s getting the pin-fall so Skip starts flying around to show that unlike Tarver, he actually has ring presence. Young makes a comeback and sends Skip to the outside and gets ready to come off the top on Tarver…but Gallows pushes Young off and orders Tarver to pin him. However Gallows find out how bad Tarver is as he walks right into Young’s Full Nelson Into A Reverse STO.

Winner: Darren Young (Still Last) (Very basic and not horrible. Crowd switched off half-way through though.)

In the finals of the Big Rubber Baton Bash, Darren Young and Skip Sheffield manage to pull a Rumble 1994 and both go over at the same time (***).

Skip is judged as the winner but they watch the replay and decide to do it again. Crowd boos the decision to do it again. Skip wins again in an inferior rematch (**3/4).

Skip is happy he won and quotes Hardball starring Keanu Reeves. And the feature is still on the website if you’re struggling for something wrestling related to read on the same weekend as Bound For Glory and Hell In A Cell. 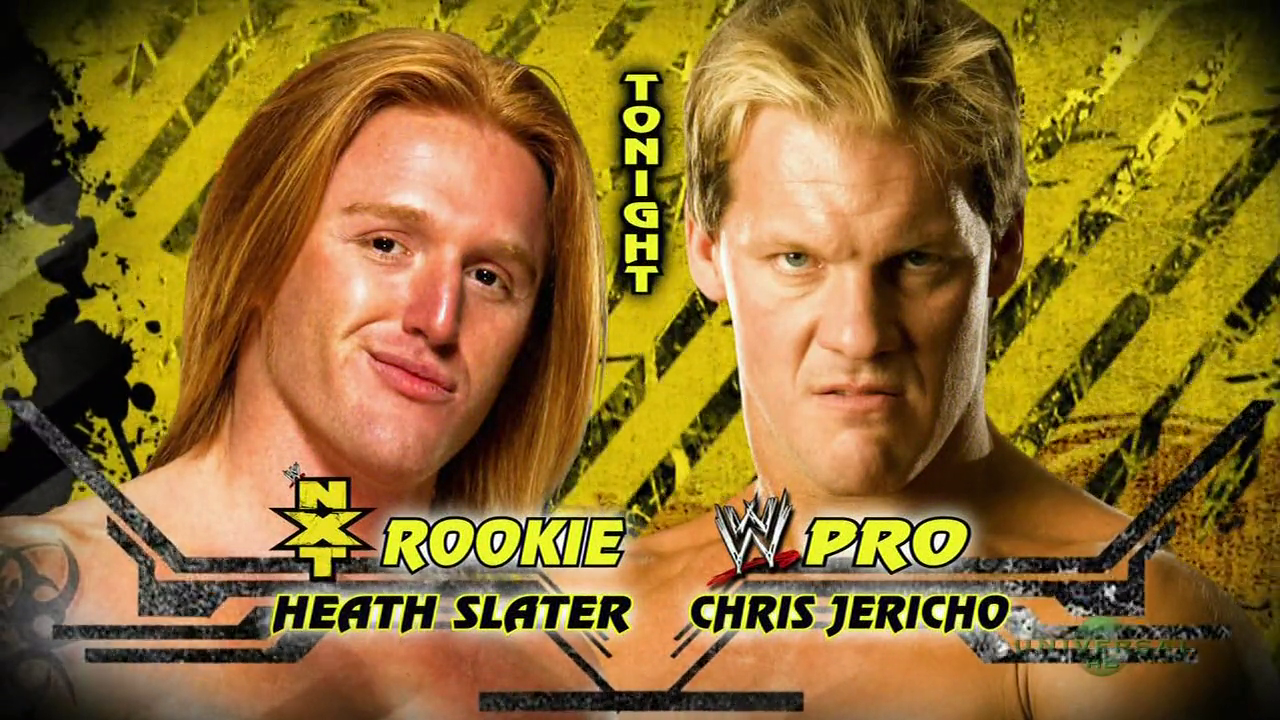 Monster Hunter Tri for the Wii reminds us Barrett lost to Christian last week thanks to Slater’s interference so we’re getting this match. Jericho gets the biggest reaction of the night as he destroys Slater like he’s the well-being of Sturgis. Jericho misses a Lionsault after fannying around, allowing Slater to try to make a comeback. Crowd is silent and when he yells COME ONNN they boo. Connecticut is not a NXT town. Slater gets two off a neckbreaker before Jericho has enough, uses the ref to get a sneaky eye-poke, synchs up the Walls of Jericho to-NO WAIT SLATER ROLLS UP JERICHO TO WIN.

Winner: Heath Fucking Slater (5-2) (Oh shit I completely forgot that happened. Jericho has a Steel Cage Match with his Wrestlemania opponent Edge this Sunday by the way.)

Jericho takes apart the steel steps and announcer table while yelling “STUPID! STUPID!!” as the crowd as the crowd goes nuts.

If Daniel Bryan was the best member of the NXT “rookie” squad, then Heath Slater was … ummm, not the best.… And I was shocked when I heard Vince wanted me to put him over in a nothing match.

I furiously paced the empty arena floor, wondering why the hell I was supposed to lose to this rookie? I didn’t want to be a part of this stupid NXT as it was, and now I was supposed to put over a young boy in his first match in the company? I was mad as hell and wasn’t going to take it anymore and when I saw Vince I was going to tell him so. But fate stepped in and, thankfully, I ran into Pat Patterson first.

“Pat, you gotta help me. I’m so fucking pissed off right now.… Vince wants me to put over Heath Slater!”

Pat looked at me calmly.

“So whats? Who care? It’s not like anybody is going to remember this match anyway. If you were a babyface, it mights make a difference, but you’re a heel, so go have funs with it!”

As much as I didn’t want to admit it, Pat was right. Stu Hart once told me that the biggest marks in the business were the boys themselves, and I was proving him right. I knew better than to care about wins and losses and they usually didn’t mean that much to me. Sure, if you’re losing every night, you’re not going to be around long, but if you have the ability to make the audience care about you and still win the big one from time to time, you’ll always have a great spot in the WWE and stay over with the audience. Even though I knew that, my pride still got in the way sometimes. But as Marsellus Wallace once said, “Fuck pride.”

It was my pride that caused me to flip out about losing to Slater, but the bottom line was it was my job to do what the boss wanted me to do and to make it great. That’s the nature of show business, not just in the WWE. I mean if Steven Spielberg cast me in Indiana Jones 5: The Search for Abner Ravenwood and my character was scripted to get shot in the ball bag in the first ten minutes, I couldn’t very well go complain and try to get it changed, now could I? If I did, he’d tell me to make like a tree and get out of there and cast my look-alike Jonah Hill in the part instead.

I’ve always compared being in the WWE to being on a good hockey team. Some nights you get thirty minutes of ice time and are expected to score the big goals, other nights you kill penalties or work the power play, and other nights you only play a few shifts a game. But if you don’t play your designated role properly and to the best of your abilities, your team will lose. If you kick ass at your position, no matter how big or small of a role it may be, your team will win.

I always wanted my WWE team to win, so that night I wrestled Heath Slater and put that dude over to the best of my abilities. He pinned me with a small package, much to the crowd’s delight, and left the ring with a huge win, while I left with more heat than I had before the match. Mission accomplished all across the board. Afterward I spoke to Vince about it and he reiterated Pat’s theory. “I wanted this finish because it helps you. When he won, it put the spotlight on you, not him. They might not even remember his name after this, but they’ll remember the fact that you lost to a rookie and laugh at you for it. You’ll get more heat as a result. Do you get that?”

I did and it was refreshing to know that even after twenty years on the job, there were still lessons to be learned. That’s the way it should always be.

Overall: Until the last minute, this was the most forgettable show NXT had produced so far because of the Rock ‘Em thing being a more fun idea on paper than in reality. Also the crowd didn’t give a shit about anything NXT related which sucked for them because it was NXT. Cool finish though.

Anyway I’ve been Maffew and here’s some Impact highlights from last night.