They’re shoe-horning this into build for Truth & Morrison’s Unified Tag Title match against Show Miz, which is still probably the most forgettable tag title match in the history of Wrestlemania. 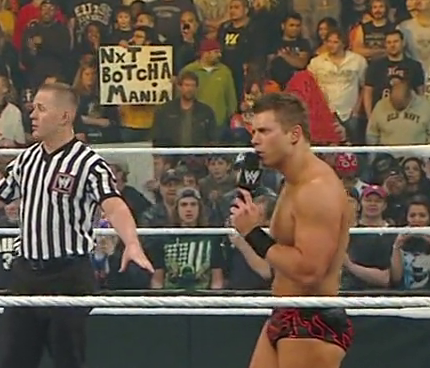 Miz reminds Bryan he’s 0-2 so far and if he loses this time he’ll make sure Bryan never fulfil his dreams. 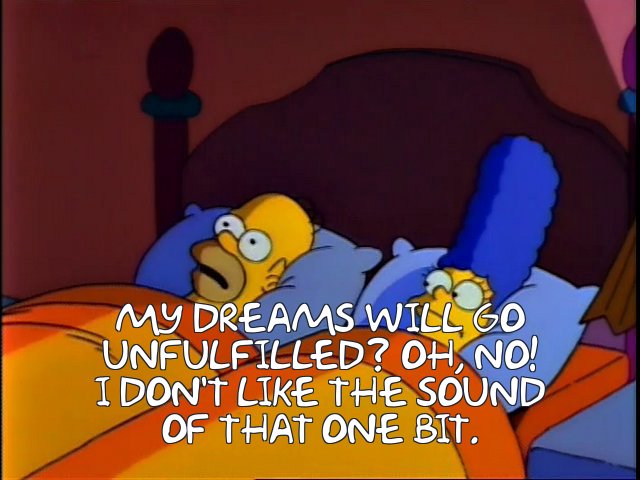 Truth rejects Bryan’s hand-shake with a dance. I thought the dynamic was going to be “The Pros (except Miz) respect Bryan” but so far the show has been “All The Pros Hate All The Rookies.” Truth & Bryan feel each other out before Otunga tags in to double shoulder tackle Bryan like they’re the Road Warriors. Otunga’s more of a Cobbled Pavement Warrior right now because he’s rough as fuck. There’s loud chants for Bryan which is impressive for the third episode. Truth sends Bryan & Miz to the outside so Truth can connect with a Tope Con Hello onto both men (but mostly Bryan because Truth doesn’t have a death wish).

When we return from the break, Bryan is powering out of Truth’s veteran chinlock to large cheers. They change to boos as soon as Miz tags in because he could get heat in entropy. Truth makes the hot tag to Otunga who struggles even with something as simple as “knock people over” as Miz is bellowing spots at him. A counter-slam off the top is broken up by Bryan who blind tags Miz and knocks down Otunga with a giant missile dropkick off the top.

Bryan obliterates Otunga who doesn’t know what to do when put in a Sunset Flip position so Bryan snaps in a heel-hook in the middle of ring with gusto. However, Miz tags himself in while he’s getting stretched and while the referee is dealing with the angry tag partners, Truth lands a calf kick on Miz allowing Otunga to dunk Miz with a spinebuster for the win.

Winners: R-Truth & David Otunga (The difference between this match and anything ECW On Syfy was opening with is immediately apparent as even first-time viewers can ‘get’ the storyline of Miz being a prick so the crowd was all over this like a fat lass on chips.)

Miz is FUMIN after the loss and vows to remove Bryan from NXT. Bryan fakes a punch to make him flinch before leaving.

We get a dramatic recap of Carlito spitting his apple at Heath Slater last week and they’re really imitating the Reality TV thing of showing something and have someone explain what happened while it’s playing so you don’t miss out on any hidden meaning.

Striker catches up with Miz and asks him if in fact MIZ let BRYAN down tonight because he’s Striker. Before he can answer, Bryan appears and tells Miz he’s been carried by every tag partner he’s ever had. “Oh that’s why I’ve won the title with every partner I’ve ever had, huh?” Bryan reminds him he got pinned tonight and then sods off. It’s fun to see glimpses of That One Promo From Talking Smack years beforehand.

It’s time for Justin Gabriel’s promo package. He likes mat-wrestling and Japanese strikes. And uhhh that’s it. His Pro Matt Hardy gives him some pointers before Jericho and Wade Barrett saunter in. Barrett stumbles over his words a little but the camerawork makes him look like Andre The Giant so who cares. 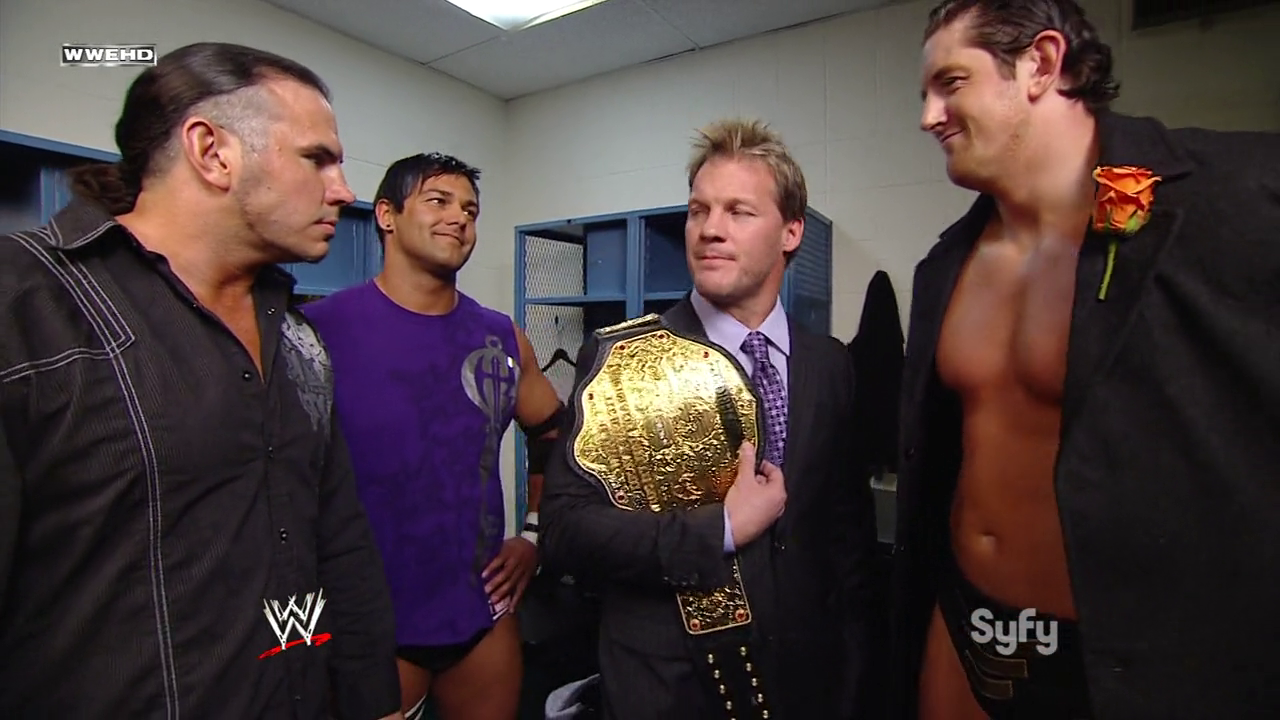 Cole reminds us Slim Jim is sponsoring Wrestlemania and who knows, maybe Slater will one day be a part of Wrestlemania. He’d lose in a minute thirty at Wrestlemania XXVII and then make up the numbers in the Andre The Giant Battle Royal every year afterwards so don’t let your dreams become memes, kids. Tarver backs up Carlito while wearing Raw’s 2020 ratings. 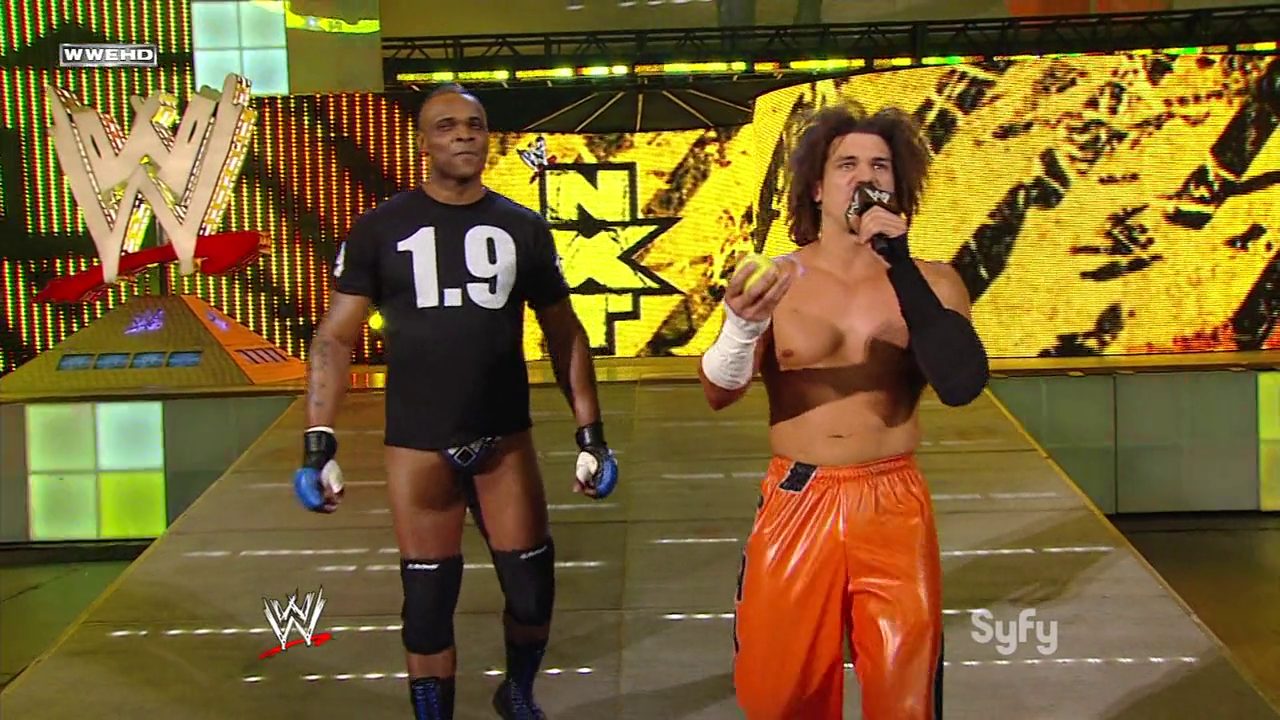 Carlito goes for the spit straight away but Heath ducks and plugs away as the crowd goes BANANA. We immediately head to break but come back with Slater still dominating. Carlito ain’t wasting his C-Game on NXT so he slowly plods and pounds away like he’s mid-90s Great Muta on minimum wage. Slater gets dunked a few times before Carlito goes to find his apple, only to find Christian has stolen it. Carlito falls victim to a roll-up distraction but kicks out…only to get his O’Conner Roll countered seconds later into another roll-up for the pin.

Winner: Heath Slater (I know the match quality is secondary to the story they’re telling with the Rookies and the Pros but Carlito may as well have been on Dial-up here. Anyway, Heath seems happy with his fluke victory.)

Darren Young’s video package emphasises his hair and entrance gear because there’s not much else to him. It’s funny seeing him dance around the place yelling PARTYYYY when his natural self is set to Lance Storm-levels of sedation. Anyway CM Punk dislikes his “life-style” (no not like that) and because Darren’s not Straight Edge there’s only so much Punk can do for him.

RAW REBOUND: Evil shades-wearing Batista wants be the face of WWE and he takes credit for Cena’s injury at Summerslam 2008 and Cena knows he can’t beat him. Cena than wrestles a handicap gauntlet match that sees Vince inviting dudes to beat on John until Batista runs into BATISTA BOMB Cena once more and let Vinnie Mac get the win. I have no idea why Vince was all over this feud when he had Bret to deal with, Batista was at his career-best mouthing off at everyone and didn’t need any albatrosses around his neck.

Cole spent the entrances talking about Jericho’s match with Edge at Wrestlemania so don’t expect much here. What an awkward time to introduce a new show with a new roster. Barrett tears Gabriel apart with various holds while Jericho yells about how great he is. Crowd gets behind Gabriel with “USA” chants and I’ll let that sink in. Gabriel nearly springboards right into Wasteland but luckily the third Sunset Flip of the show saves him. Barrett bounces Gabe off the ropes with a Tully Blanchard-style backbreaker.

It only gets two but I bet a Sunset Flip would have ended it. Jericho yells again about how great Wade is and all Cole & Mathews can do is let him shout. Gabriel somehow manages to bop Barrett off the second rope and finishes with the 450 out of nowhere in his only proper offence of the match.

Winner: Justin Gabriel (This was a showcase for Barrett whose offence and ring presence was in another league compared to the cookie cutter FCW guys on the show.)

Jericho dunks Matt out the ring and both Rookie & Pro beat up Gabriel afterwards to end the show on a positive note.

Overall: Cole & Mathews were too busy plugging Wrestlemania to shit on the Rookies this week so this was a pretty un-infuriating episode, even if the quality of wrestlers went up and down like a whore’s drawers. Seeing how good Bryan & Barrett were at the very start of their WWE careers is fun to watch but nothing major is going to happen until they get the biggest PPV of the year is out the way first so be sure for an exciting episode next week.

Until then I’ve been Maffew and SPEAKING OF EXCITING EPISODES.