“After twenty years, ECW is over.”

We’re in Kansas City as Byron & Josh hype “the next revolutionary step of sports entertainment known as NXT” debuting next week while sounding as natural as the supermarket machine telling you there’s an unexpected item in your bagging area.

Oh my God, I got so used to laughing at Jerishow’s first theme that I’d forgotten about the wonderful attempt at blending Miz’s theme with random BIG SHOWWWW samples shoved in like a Black Box track. Goldust & Yoshi Tatsu earned this title shot by defeating The Dudebusters last week which made the top team in a division of two. Goldust looks grand as he smacks Miz around and sets up a nifty backbreaker/dive over the ropes combo so he’s clearly motivated by this “potentially losing your job and needing to look good” situation. Miz tries throwing Yoshi out the ring but he holds on and rebounds in an impressive moment. Turns out if you make remind talent about the concept of death they work twice as hard. Show gets the blind tag and headbutts Goldust and when we return from break, Yoshi is attempting to kick away at Show. That goes as well as could be expected as Bryon nearly has an aneurysm talking about how you can’t grasp Big Show’s form like one of those Biblical descriptions of angels. Yoshi’s able to overcome such double teams as “Show throws Miz onto opponent” and “Show throws Miz at opponent” to make the tag to Goldust. He gets a bunch of moves on Miz but as he tries a pinfall, Show tries to interrupt so Yoshi tries to stop him by taking a chokeslam to the outside. Meanwhile, Show takes advantage of the referee distraction to punch Goldust and that’s enough for a Skull-Crushing Finale and the pin.

Winners and still Unified Tag Champions: The Miz & Big Show (Goldust & Yoshi were motivated but this wasn’t going to be anything other than “hey it’s the final episode let’s have the champs on to remind everyone they beat DX for the titles” and that’s what we got. It was a nice, possibly unintended moment to have The Miz return to the last ever show on the brand that forged him to stand triumphant with lots of belts on him.

Alleged ECW General Manager Tiffany appears on the titantron and someone in production accidentally clicks “big pop” on the fake crowd machine for the last great moment on the show. She tries talking about NXT but Zack Ryder wants to know why he doesn’t have the title shot tonight. “Because you lost to Christian last week?” “Hey that was on Superstars, it doesn’t count!” Anyway he vows to interfere anyway because it’s Extreme Rules and ends with “wooo wooo wooo” which is getting a bigger reaction every week.

We’re in the ring and I will genuinely miss these train wrecks. I can’t think of any other recurring segment that lasted as long as it did despite not working on any conceivable level. Abe’s a free talent now and he can’t wait for Smackdown & Raw to open their wallets for him. Abe hypes up the biggest name in sports entertainment to appear on his show and he introduces…himself. 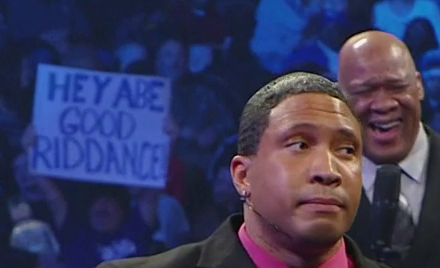 Shelton Benjamin appears to tell him the show’s unwatchable with a guest so he can’t imagine how bad it’ll be when it’s just him. Lance Archer arrives, as does Trent Baretta & Caylon Croft. Oh and then Kozlov starts speaking foreignese and this causes a couch-destroying brawl but Shelton and Kozlov hug to end it. This was disappointingly normal by the show’s usual Lynchian standards but Tony helped by laughing over every line of dialogue, regardless if he was supposed to be or not. 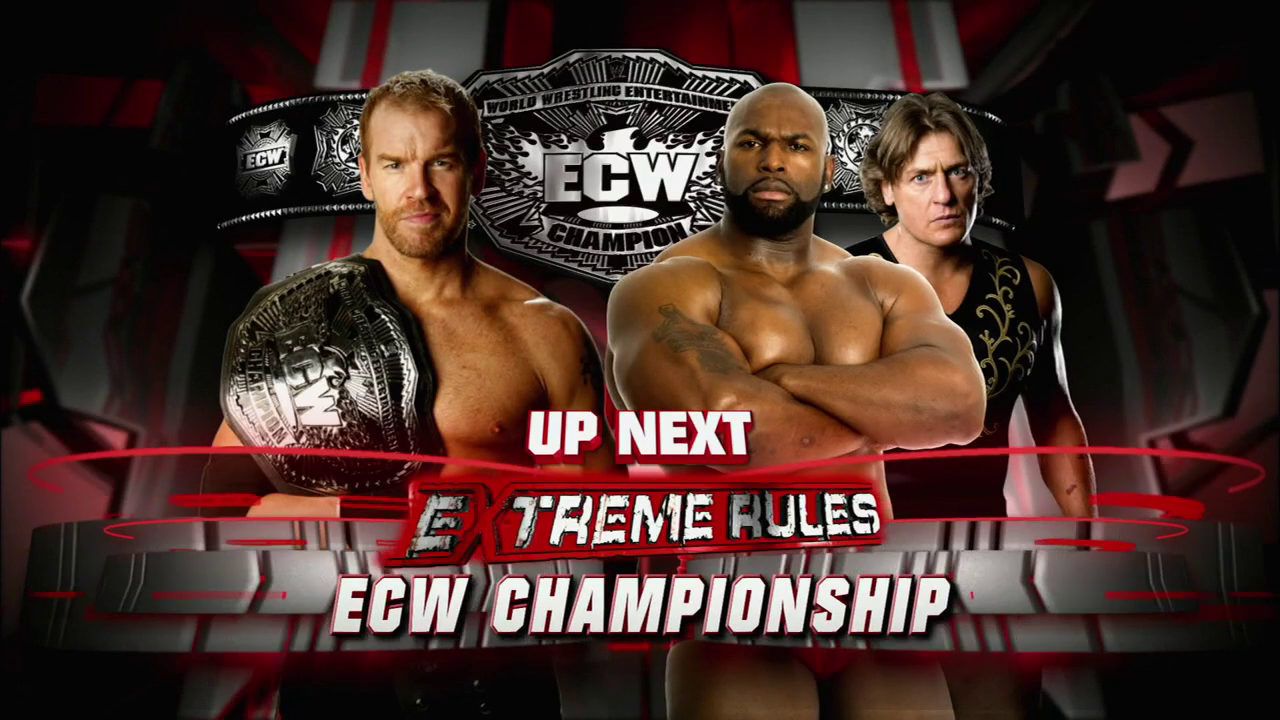 Christian says when he returned to ECW, many thought he should have left a bigger impact.

ECW let him reconnect with the audience and he’s happy being the longest-reigning champion currently in WWE and he’ll be proud to be the last ever ECW Champion. After the polite applause dies down, Zeke shoves him down and Christian isn’t able to use his quickness for long until Zeke throws a Singapore Cane into the ring, which Christian uses to twat Zeke off the apron. However, Ryder runs in (like he said he would) and gets dunked on a trash can. Rosa Mendes starts yelling at Christian so Tiffany charges out to deliver a spear and ejects both of them from the match like she’s Bill Watts removing dirty Russians.

When we return to reality, Zeke is slamming Christian onto the ring steps but takes too long getting a bin so Christian launches himself off the steps to dropkick it into his face. Crowd enjoyed that. Zeke empties the shopping trolley’s contents into the ring and attempts to squish Christian with it. He moves, but misses a spear and pays tribute to the Real Last ECW Champion.

It only gets two. Zeke charges Christian in the corner while holding a bin lid, misses and gets the rope-assisted back kick. It only gets two and Zeke launches Christian off the pin attempt, before bum rushing Christian while he’s holding a bin. Regal helps him get a table in the ring but as it makes the apron, Christian lands the basement dropkick to take them both down. Table gets set up near the turnbuckle and both men fight over what’s going to happen next with Christian realising his Tornado DDT is going to get countered so he sends himself over the table. Christian runs outside to chase off Regal but he simply waits for him to return to the ring before sneak-attacking him. Christian takes his eyes off the ball to deliver a Killswitch to Regal which allows Zeke to send Christian through the table to kill ECW.

Winner and NEW ECW Champion: Ezekiel Jackson (The Extreme Rules matches on Syfy all ended up being the same plunder-based silly buggers so this was fine as a final send-off to try to get the last squirts out of Big Zeke, but the Rumble match did a 200% better job of making him look legit.)

Ezekiel poses with Regal in the ring as the genre-defining new reality show gets hyped by the announcers. 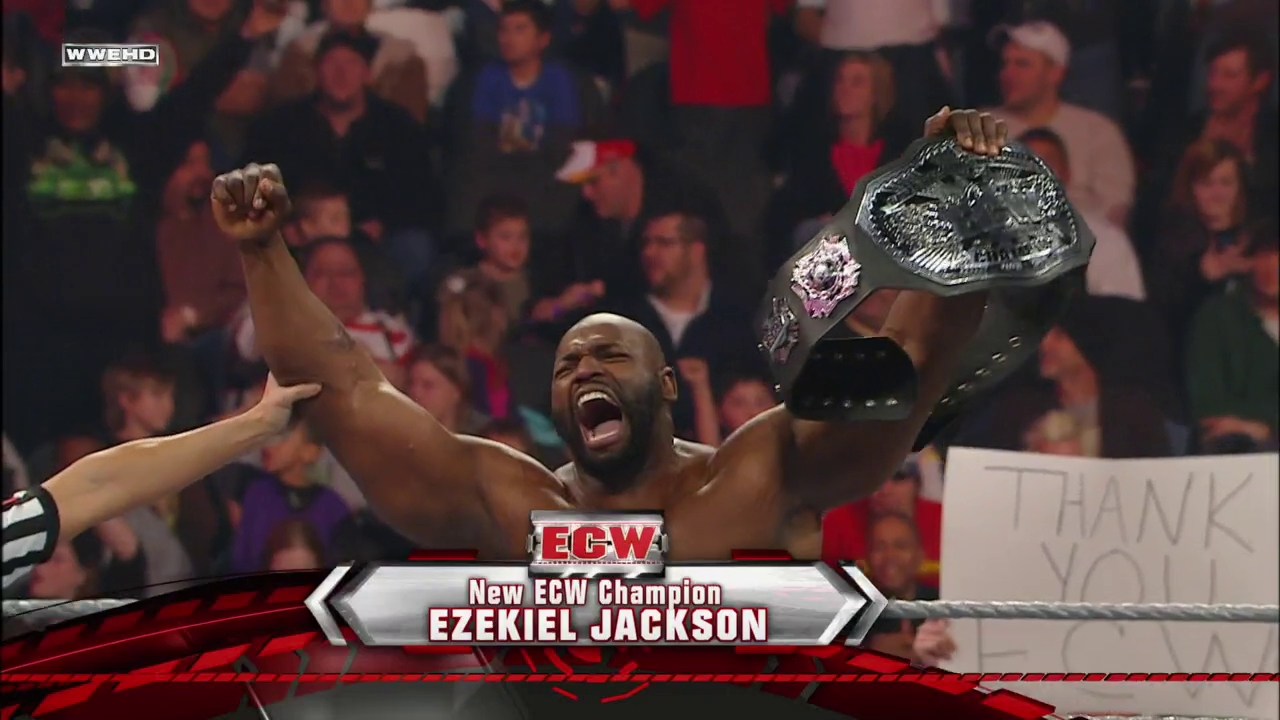 And after four years, that’s it.

It’s been interesting watching this show with the benefit of hindsight while remembering the initial negative reaction. WWE in 2006 needed a third brand to get newbies ready for prime time and also something for wrestlers spinning wheels on the other two brands to do. In 2020, NXT is serving that purpose with it’s unique identity but everything that brand is doing right is down to the mistakes ECW on Syfy made.

The decision to use the ECW name (that Heyman manage to convince WWE to bring back so many of his bankruptcy debts were cleared ALLEGEDLY ALLEGEDLY) in order to take out two birds with one stone is likely the show’s legacy as many people still can’t take a show being called ECW not being like…ECW. Even Conrad Thompson in his podcast with Brucie P can’t hide his disgust for the sacred letters being brought back for a show featuring zombies & vampires and his feelings are shared by a lot of die-hards who dared to think WWE would make a show called ECW like…ECW.

The brand’s biggest issue wasn’t necessarily the talent (but RVD’s DUI & sober Sandman didn’t help) but having no idea how to use it in the first few years. ECW had to contend with being a separate brand for newbies (CM Punk, Shannon Moore), a revival of a beloved company (Balls Mahoney, Sabu) a dumping ground (Hardcore Holly, Snitsky) while also propping up champion The Big Show as he appears on two brands a week in the worst shape of his career. So it’s no wonder the original year’s direction was flying around like a compass in a magnet factory, and little wonder why we got one of the weakest builds for one of the shittiest PPVs of all time in December 2006 with a grand total of two announced matches.

The talent and overall aim would flicker from 2008-2009 which wasn’t helped by the heads of creative getting changed frequently along with what WWE wanted from the show, but if you’re someone who focuses on the positives there’s plenty that deserves more love:

Enough reminiscing, the real question about what’s next is of course THE NEXT GENERATION OF REALITY TV known as NXT.

However I’m letting you all know now, I absolutely hated the initial version of NXT when it first aired and I’ve not watched it since.

But it can’t be worse than The Abraham Washington Show so bring it.

Thanks for reading, I’m still Maffew.