Swagger isn’t happy about defending his title against Finlay at No Way Out but he’s going to sort it out tonight and demands Hornswoggle comes to the ring. However instead of him we get the undramatic return of (mumble unexcitedly if you know the words!) ”It’s… 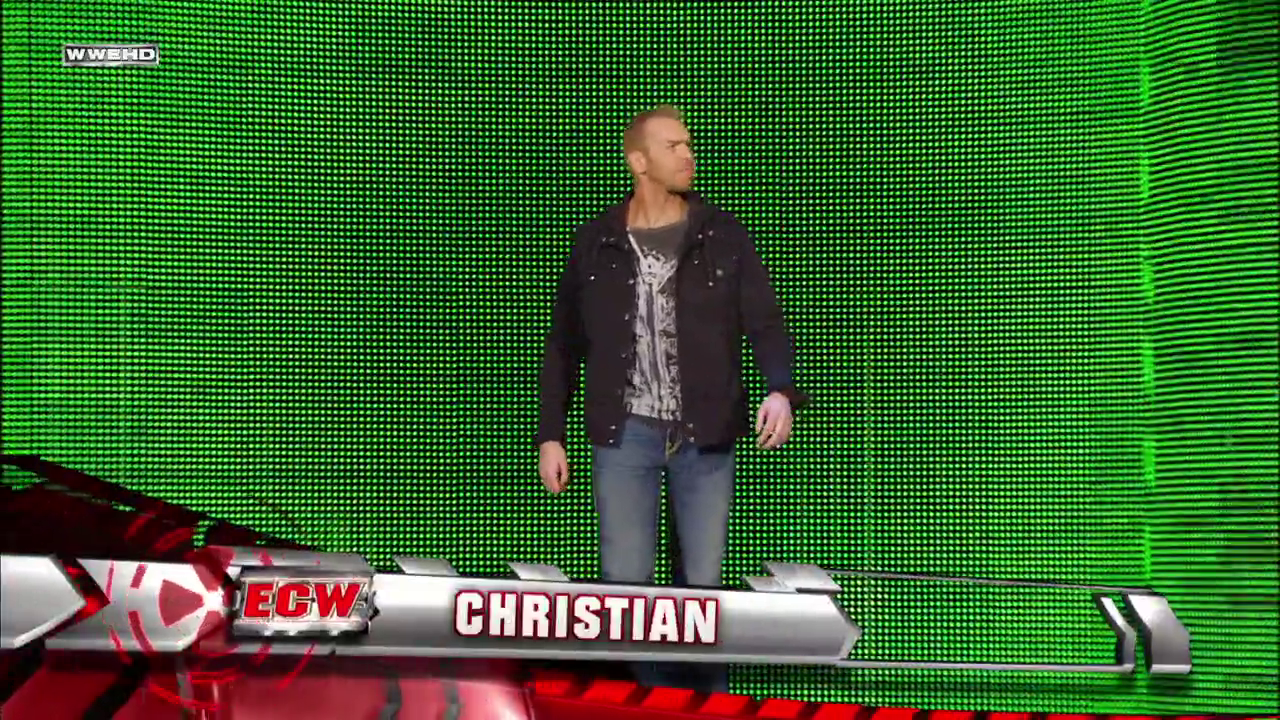 ”This moment just became instantly classic!” yells Striker as the crowd chants his name (Christian’s not Striker’s). He informs Swagger he’s here to save his life because he’s in danger of electrifying himself with that lisp and microphone. He gets a big pop for ”sufferin succotash” which sadly caused someone in the back to write it down for future use. Christian challenges the winner of Swagger vs. Finlay and Swagger mocks him for leaving WWE because he couldn’t hack it. Christian dents the mic over his head and leaves to cheers.

OK. Christian returning un-hyped on the C-Brand is weird at first but if Matt Hardy turning on Jeff was always the plan and the internet wrote the “Christian was supposed to help Edge but they changed it because it leaked” story because they heard Christian was returning and put 2 and 2 together to get Not-Two then it makes sense. Why else would they debut a guy before Wrestlemania if they didn’t have a plan for him? WWE needed to deliver certain ratings for Sci-Fi (to compete with Gamera re-runs) and there were no ready-made stars to replace the void left by Matt. Or maybe they signed Christian so TNA couldn’t use him like EA signed Westwood Studios and didn’t put much thought into it. I don’t know, but I do know the crowd loved his return despite the “hurr hurr you have a lisp” insults which feel way more heel-ish than beating up a man-child for stealing your belt.

Swagger complains to Teddy backstage but he tells him to get ready for his match tonight against Christian. This was the understated debut of Swagger’s horrible acting.

Tommy Dreamer vs. The Miz

We get clips of Dreamer getting crucifixed on the mic by Miz & Morrison so brutally that they made Raven go out and apologise later that night. Dreamer grounds and pounds Miz but he’s not quite Tank Abbott so it was more slop and drop. Miz dunks him on the guard-rail to take over with a chinlock. The previous episodes have had silent crowds but Miz beating up Philly Santa Claus is firing them up like a Great White concert. Dreamer gets two off a neckbreaker so Morrison distracts Dreamer with the concept of abs for Miz to pick up the win.

Winner: The Miz (Chapter 2 in Dreamer vs. You Damn Kids. Nothing amazing but the crowd’s making noise which is always good.)

Jamie Noble recaps The Boogeyman match from last week with Teddy Long and reminds him he’s The Big Dog on Raw. Teddy tells him to beat it as he’s got an appointment which gives us the debut of Tyson Kidd and Natalya (who had a match on ECW last year but is so far down the roster this may as well be her debut). 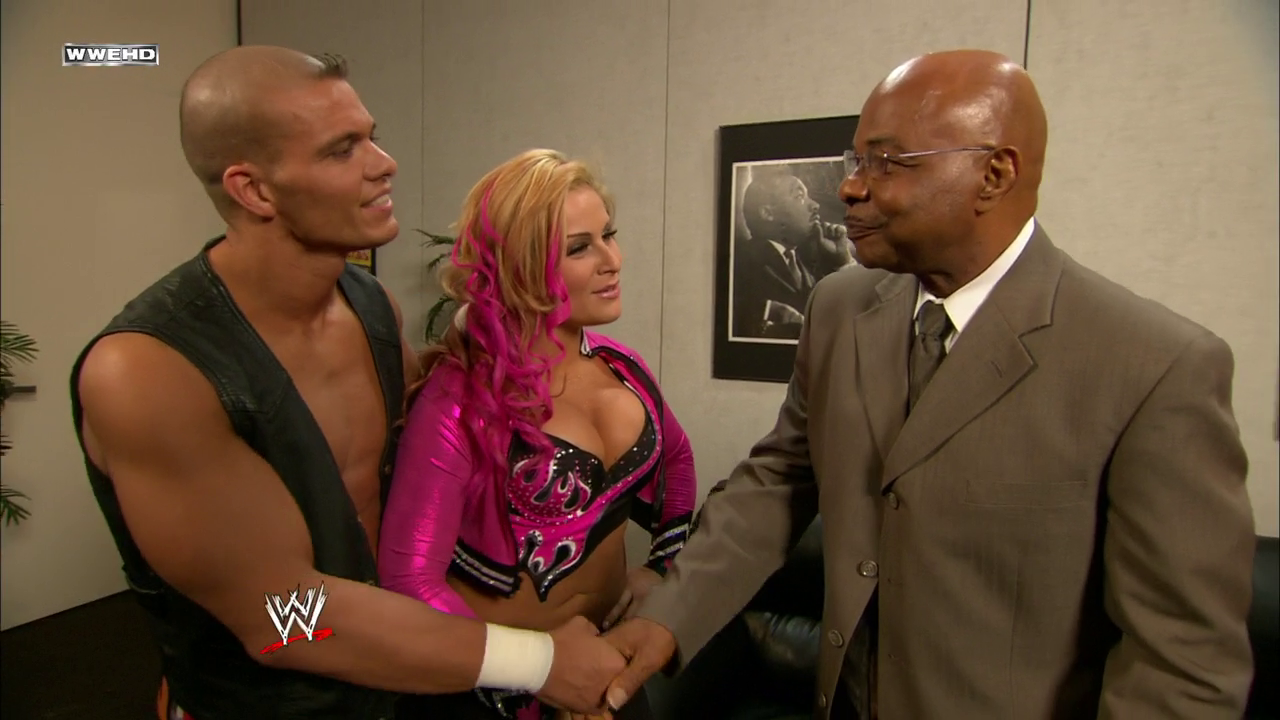 She mentions Kidd was trained by her Uncle Bret Hart (take a shot) and he promises to put Noble in the pound. Eh, you had to be there.

We get a look at No Way Out 2009 and I’m here to remind you that Kozlov made it onto the poster which was made months earlier with WWE assuming people would be dancing in the streets shouting KOZLOV KOZLOV after all those twenty minute HHH matches. 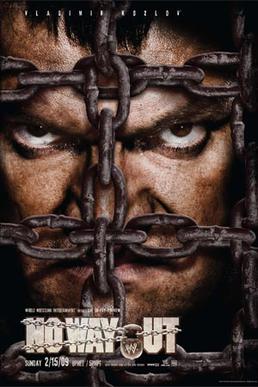 Christ, three debuts on one show? This is Bao (x-paaaaaaaac X-PAC YOU THINK YOU CAN TELL US WHAT TO DO)’s one WWE match as he would change names and become still-employed ref Ryan Tran. Here’s a before/after. 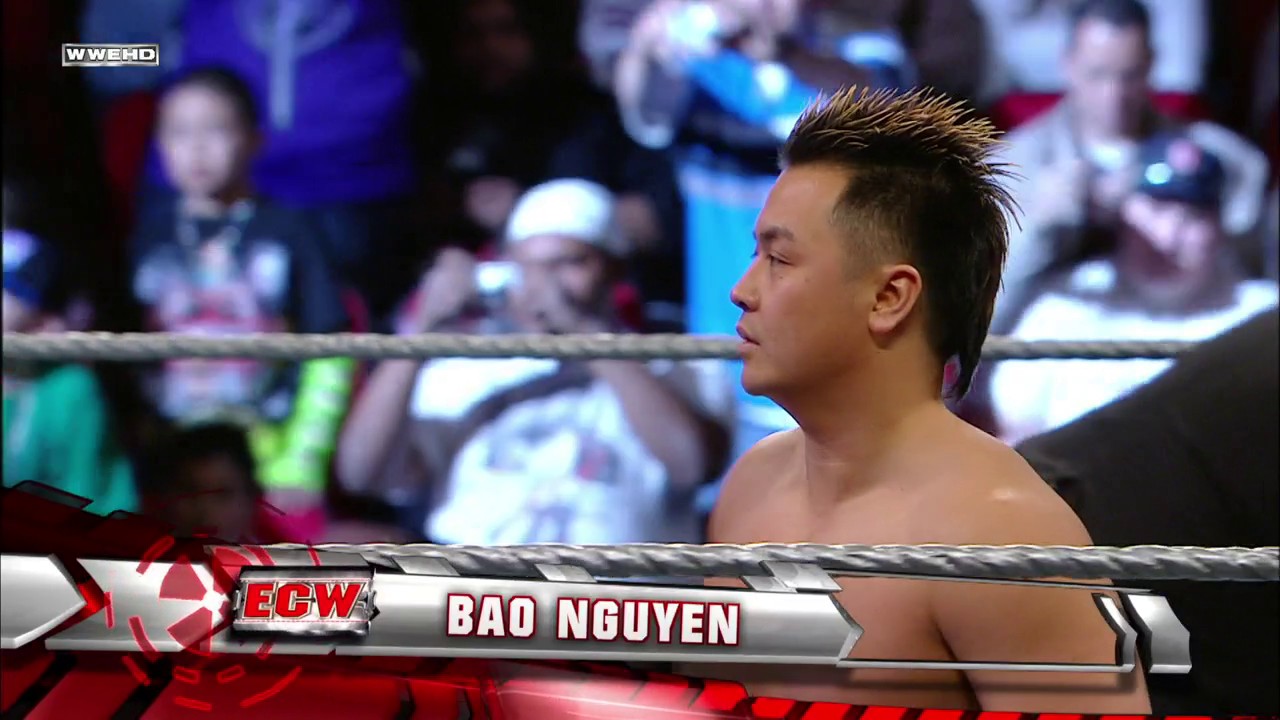 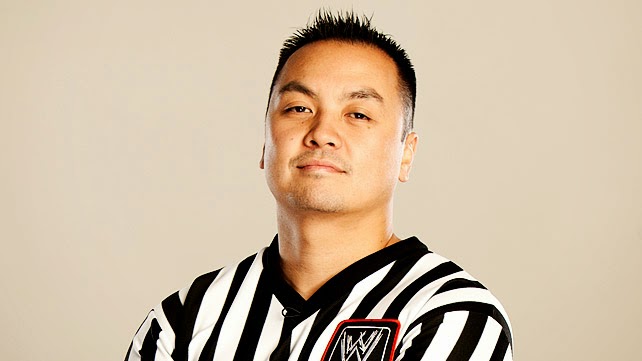 Kidd snapmares him and gives him a hard kick to the back, following with a kick so cool-looking that they bust out the slow motion replay.

Kidd continues to treat Nguyen like a small fire and stomps him out before finishing with a springboard elbow.

Winner: Tyson Kidd (A fine squash here with Kidd wasting no time getting his explosive kicks in.) 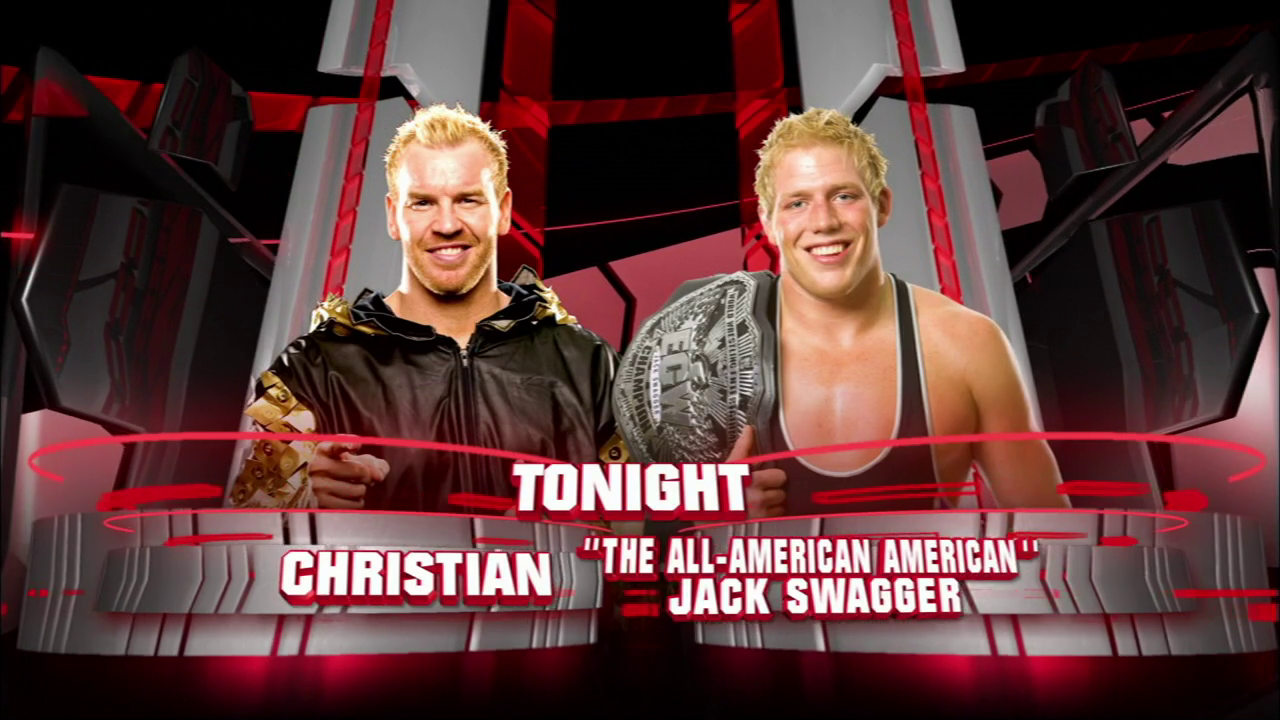 Swagger wastes no time taking him down amateur-style but Christian laughs it off saying Vince already thinks he’s amateur. OK he doesn’t say it, he just saves it for the entirety of his post-WWE career. Christian gets some hard shots in and the crowd goes nuts for all his strikes. Christian fakes a crossbody so he can get a sunset flip for two before Finlay & Hornswoggle make their way to ringside as we go to break with Todd urging us to watch the end of “Swagger vs Striker.”

Swagger continues his mat-based dominance as Hornswoggle and Finlay join us on commentary (Horny: ‘”Ahh Ahhhh!”). Christian uses the power of fan support to hit a tornado DDT and reverse the tide. Christian’s strikes are very good, up there with Matt Hardy weirdly enough. He misses a diving headbutt off the top, impressing Finlay. ”Hey this is great!” Sambo suplex gets two so Jack attempts to German Suplex him off the apron. That doesn’t work so Swagger launches Christian at the guest commentators instead. Swagger removes the turnbuckle pad and attempts to dunk Christian on it (which is how he won the title) but Finlay twats Swagger’s leg with the Shillelagh allowing Christian to get his first win back with the Killswitch.

Winner: Christian (The thing with Christian is he’d usually have good singles matches but I’d forget everything he did so having a highlight reel with a screwy finish was probably the best way to go.) 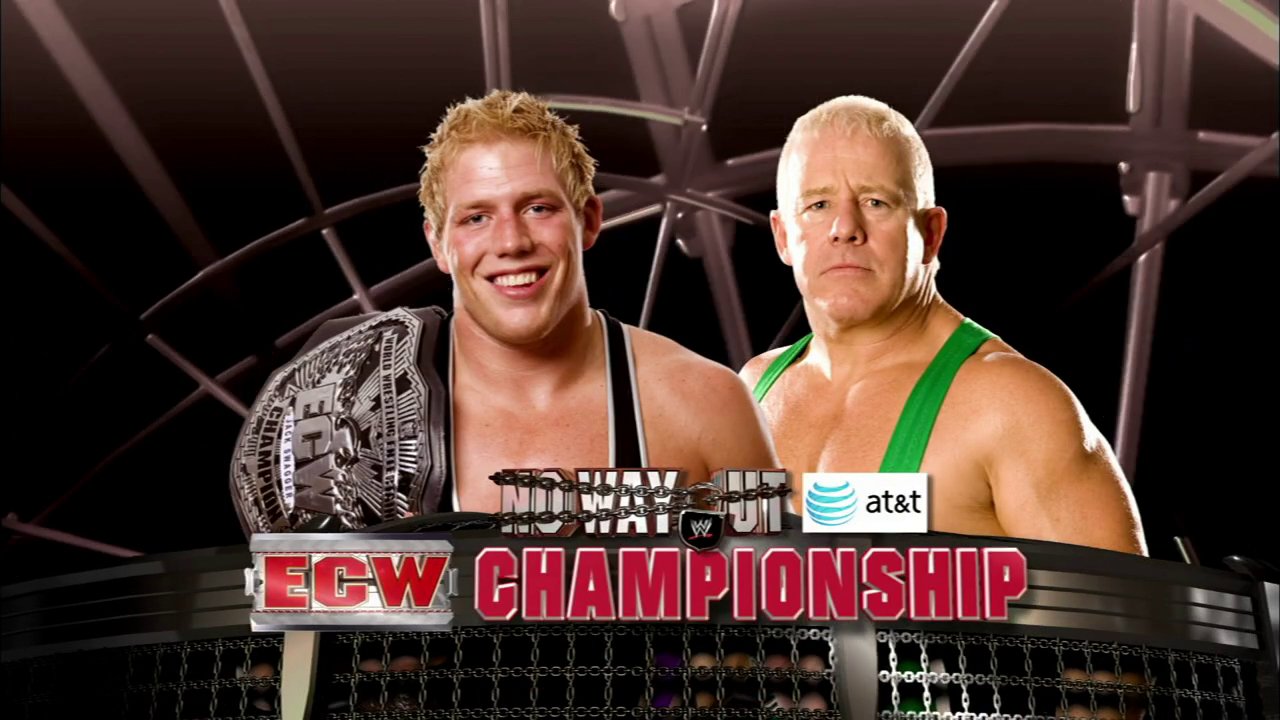 This match is already chugging uphill as it’s in the cool-down slot between McMahon vs. Orton and JBL vs. HBK. Crowd immediately starts the WE WANT CHRISTIAN chants to show what an effective babyface Finlay was. A Single Crab kills a few minutes until Finlay misses a kick in the corner and somehow ends up clanging the corner-post like he does every match. Swagger works over Finlay’s arm and all you can hear from the members of the crowd that aren’t paying $10 for a Pepsi are bellows of BORRRRING. They try some chain wrestling but the crowd is killing this. Swagger goes to charge Finlay in the corner but Fit fakes a collapse so he can get a roll-up. That sequence looked terrible and the ref wouldn’t count the pin attempt. Finlay revs up his finishing sequence but Hornswoggle accidentally distracts his Dad/Keeper leading Jack to finish with the Doctor Bomb.

Winner and still ECW Champion: Jack Swagger (Wrong match, wrong wrestlers, wrong place on the card, wrong everything. Christian showing up the week before took away what little interest these two had and I read somewhere that the failure of this match caused WWE to change their mind about an ECW Title match at Wrestlemania. This fan-sign said it all.) 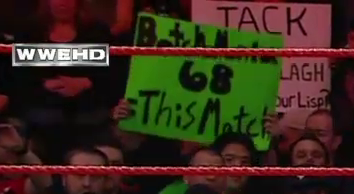 Overall: Very eventful episode for good and bad reasons so watch this and skip the PPV match and let us know how you’d re-book Christian’s return, even if no-one asked ya!