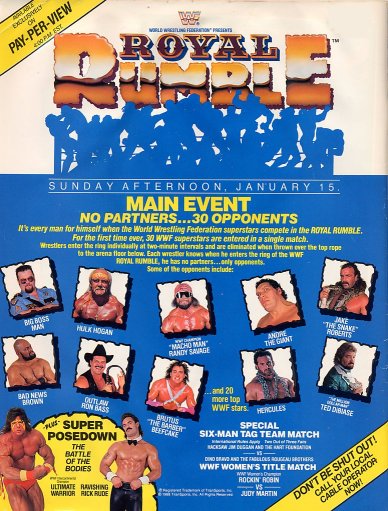 Question to the masses: If a baseball game lasts until 3am on a work night, can we still blame Vince McMahon? Ponder on that while enjoying the show.

Since there is no Bunkhouse Stampede to steal viewers this year, the WWF asks us to pay for the 2nd annual Royal Rumble on PPV. Thank goodness that it’s 27 years later and I can just play it on the WWE Network.

Summary: Really good opener that kept you on the edge of your seat anticipating what could happen next.

Meanwhile, the “Million Dollar Man” Ted DiBiase (w/ Virgil) is ready to pull his lottery number for the Royal Rumble match. When Virgil reveals the number, DiBiase isn’t satisfied and calls out to Slick. Since Slick was ecstatic about the Twin Towers’ numbers, DiBiase purportedly sought to make a business proposal with him.

Next, the Honkytonk Man picks his number yet isn’t thrilled in the least.

The Bushwhackers make their WWF supercard début by destroying the tumbler to get their numbers. Pass the Steinlager!

Bad News Brown picks his number and informs us that it’s “good news for Bad News.”

Roberts retrieves his number, shows it to Damien, and hopes that Andre is still there when he arrives.

When the Rockers get their numbers, Jannetty gets Jack Daniels while Michaels gets kamikazes. Oh wait, that’s AFTER the show. Never mind.

Summary: Who in the WWF thought Rockin’ Robin had any semblance of talent to be Women’s champion? Regardless, the popcorn tasted much better than this match did.

Backstage, Sean Mooney interviews Slick with the Twin Towers. When he broaches the subject of DiBiase, Slick denies any shenanigans faster than the babysitter’s boyfriend when the parents pull up in the driveway. We then revisit DiBiase’s drawing as Slick skirts the issue while praising his team.

Pre-recorded promo by Fuji airs. As you would expect, he advocates the Powers of Pain and runs down Demolition. Okerlund then interviews Elizabeth who doesn’t want to think about a possible confrontation between Hogan and Savage. Next, Jimmy Hart shills both Greg Valentine and the Honkytonk Man.

In the arena, Ventura sits on the King’s throne, wants to be King himself, but promotes the battle for King of the WWF like he should.

Summary: One would think an eight-time NWA champion passing the torch to someone would elevate him, so I wonder what the future holds for King Haku. The Houston faithful, seeing two heels battle one another, didn’t root for either wrestler. Unfortunately, this was Race’s last match in the WWF.

Next, Beefcake begins the promo marathon. He’s followed by Valentine who doesn’t trust anybody. After that, Mr. Fuji and his panting Powers of Pain prepare for the Rumble. Say that five times fast. Holy long-lost legends, Batman! It’s Big John Studd! He’s out of retirement and has left the Heenan Family (aired 12/24, taped 12/6). The next promo comes from Mr. Perfect who coins 1989 the “year of perfection.” WWF Champion “Macho Man” Randy Savage follows with a lot of enthusiasm.

Backstage, Okerlund interviews DiBiase (w/ Virgil) and questions him about a certain business transaction. How’d he get ahold of DiBiase’s bank statement so quickly?

Elsewhere backstage, Mooney interviews Heenan, the Brain Busters, and André. After André threatens to throw everyone out of the ring (including the Brain Busters), Arn whispers secret military strategy to Blanchard. Clever!

Okerlund then interviews Hogan whose ego is off the charts. Frankly, if he and Savage were in the ring together, Hogan stated he would toss Savage out. I smell dissension in the ranks.

Summary: Excellent pacing, excellent storytelling, but the hot air left the balloon once the MegaPowers were gone. To me, this was Studd’s lifetime achievement award from the WWF. Unfortunately, he died of liver cancer and Hodgkin’s disease in 1995. RIP John.

After the match, Virgil tries to attack Studd to no avail. After nailing Virgil, Studd gives him an Irish whip followed by a vicious shoulder block. After Virgil goes down like a house of cards, Studd slams and clotheslines him. For the sake of Virgil’s health, Studd tosses him out like a sack of potatoes.

As the show ends, promo #4 for WrestleMania V airs.

Conclusion: With the exciting opener as well as an entertaining Rumble match, this show is definitely worth your time to seek out and enjoy.