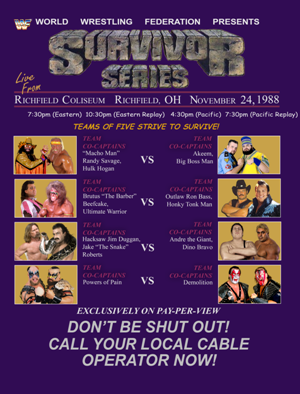 We’re back in Richfield for the 2nd annual Survivor Series on Thanksgiving Night. Grab your turkey leg and enjoy!

Summary: Great opener as Warrior was held back for the most part until the finish which is smart booking. His push continues.

Summary: Excellent match that incorporated the strengths of each team. Additionally, a double turn by the Powers of Pain and Demolition added intrigue to the finish.

After the match, the Powers of Pain raise Fuji onto their shoulders. To finish unfinished business, Demolition returns to brawl with the Powers of Pain. Upon slamming Warlord, Ax clotheslines each Power of Pain with help from Smash.

Backstage, Sean Mooney interviews Brown. While Brown doesn’t care about Survivor Series, he’s focused on the WWF title. Calling Elizabeth a “skirt” firmly secures his role as a heel. After all, who cheers a misogynist?

Also backstage, Okerlund interviews Fuji with the Powers of Pain. I like this switch as Demolition doesn’t need a mouthpiece, but Powers of Pain do. Fuji tries to play off their success as his sole responsibility, but he comes off as disgruntled to me.

After Monsoon and Ventura run down the rest of the card, Okerlund interviews the heel faction for the next match.

In another portion of backstage, Mooney interviews the babyface team for the main event.

Summary: The match came to a screeching halt after the DDT.

After the match, Roberts grabs Damian from under the ring and chases the heels from ringside.

Backstage, Okerlund interviews the heels for the main event.

Summary: Entertaining match with a predictable finish. The Boss Man and Akeem eliminations were a bit hokey though.

After the match, while Hogan poses for the crowd, Elizabeth assists Savage to his feet. When she comes over to talk to Hogan, the Hulkster grabs her from around the waist and swings her around in joy. Savage looks none-too-pleased about that. Things could get interesting moving forward.

Conclusion: This was an absolutely fantastic show with only a couple minor glitches. While this was the best PPV of ’88, only the inaugural Clash bests it as the show of the year. Nevertheless, grab some family and friends as well as some popcorn, fire up the WWE Network, and watch this gem.