Knox’s entrance sums up his character, a fan half his size tries to grab Kelly and he does nothing about it.

He’s the worst thing about this show by a hairy, lumpy mile. He’s greener than March 17th and his character is ”man in a bad relationship who gets beat up a lot.” Punk gets a sneaky roll up straight away for a close near-fall after ten seconds. Knox punches like those robots you see on YouTube that engineers program to open doors but instead rip the door off the hinges. Punk locks in the Tarantula-type hold in the ropes and Knox sells by looking confused. Knox gets the advantage by running out the ring then attacking Punk when he gets in. Knox blocks a springboard by pushing Punk off the top and follows with Irish Whips into the corner. Back-stretch and I check my e-mails. Styles reminds us Cyber Sunday was last Sunday and adds nothing because well, what happened? Knox counters a Frankensteiner to a powerbomb that looked nice. It gets two and Punk makes his comeback with his finishing sequence but Knox counters the running bulldog into a backbreaker for two. Hey that looked OK too. Punk takes down Knox and locks in the Vice for the count-out.

Winner: CM Punk (The finish was never in doubt but credit to Punk for making Knox look competitive.)

Jericho talking about Enzo & Cass’ debut on Raw summed up Punk’s loud fan support: Not everyone knew who he was when he started but when a section of the crowd is reacting very positively, other fans joined in. Plus he’s presented as a wrestler who can overcome the odds and does so very convincingly.

Rebecca ”Nicole Bass on Methoxetamine” DiPietro introduces the new signings, Elijah Burke and Sylvester Terkay. Burke’s name is OK by the re-naming standards of WWE but TURKEY? Burke thankfully grabs the mic off Rebecca and hypes himself like Billy Graham. He’s the cherry on top of your sundae, daddy etc.

Don’t get attached to Turkey, he’s gone by January. At least he survived Christmas.

Heyman wobbles to the ring as Styles explains he’s a dick because he takes full credit for the success of ECW. Him, no-one else. That’s better than the I AM THE MESSIAH AND LORD OF ECW stuff from a few months ago. He has the Harambe head from last week and explains how he made a monkey out of RVD. All that for one joke? He’s been taking lessons from Mel Brooks. 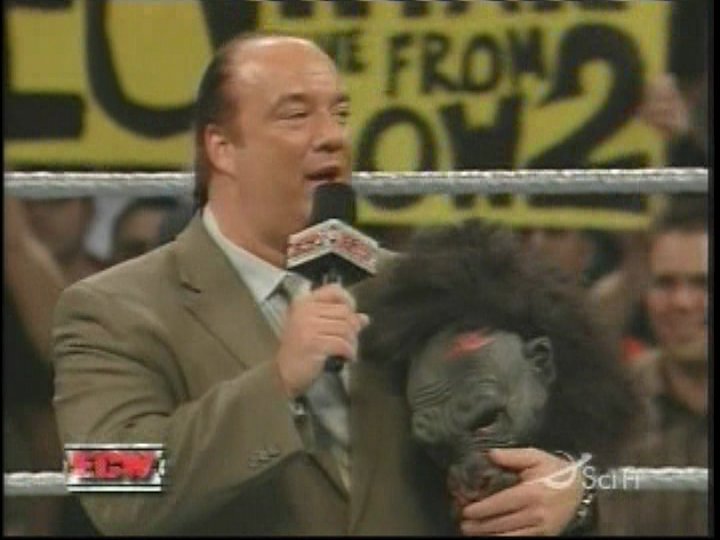 Recap of Heyman attacking RVD so he could lose the match last week to Show & Test. Heyman books RVD & Holly vs. Show and Heyman tonight so RVD can try to get a chance to get revenge. Heyman booking himself in a match? Hey call me cynical but I think something’s up.

Heyman explains nearly all of the Extreme Elimination Chamber participants have been decided except one and invites anyone from ECW or Raw or Smackdown who wants to step up. Ah, so that’s how the PPV headliner ended up on ECW. With a month to go.

That same fan from before tries to pat down Khali but Daivari elbows him. Even the guy with the huge manager is manlier than Knox.

That’s the most interesting thing about the match sadly. Daivari in ECW is good for him as he gets a chance as a wrestler which he wouldn’t get on Raw or Smackdown but let’s not shit ourselves here, his offence is punches and default Create-A-Wrestler moves and his gimmick is I’M FOREIGN AS FUCK BOO ME. He pounds Guido and pins him with the tucked-in-DDT.

Dreamer looks ready to cry during his entrance. Bless his large heart. Speaking of enlarged hearts, Test dominates to start and shrugs off Dreamer’s attempt at brawling outside, which is a smart strategy. Test then goes for a chinlock after less than a minute. Jesus. Test goes for a slam but Dreamer turns it into a Reverse DDT. Dreamer with the Sky High for two. He waits for Test to recover so he can try a DDT but Test runs away and gets a nut-shot when Dreamer’s close. Test kicks his face off and finishes with the TestKO.

Winner: Test (Surprisingly quick match considering both of these guys are nearly top-tier on this show)

Recap of Cyber Sunday. Kane was chosen to wrestle Umaga instead of ECW’s The Sandman and Booker T’s title was on the line in the triple-threat. I’d review the match but it was such a pointless gimmick of an event that it’s not worth anyone’s time. Maybe, at a push, the Rated RKO vs. D-X match but their New Years Revolution rematch was way better. Here’s K-Fed’s interference instead.

Heyman’s wearing a track-suit. Big Show doesn’t have his title with him. Yeah, why bother? RVD runs around Show to get at Heyman, leading him to ”plead like an out-of-work prostitute” until Show knocks him down. Show pounds RVD in a manner only Show can do. It goes on for ages until the crowd apparently starts chanting for ”Hardcore Holly” but the lights are out on the crowd so maybe they are, maybe they’re not. Holly tries to help RVD when he’s sent to the outside but Heyman shouts the ref over so he can’t. Show continues to pound and pound away on RVD, who is making little attempt at tagging in Holly. Heyman gets a few slaps in as Show holds him. RVD tries a comeback but Show takes him down with the diving clothesline. I keep calling that the Diesel clothesline, is there a proper name for it? Anyway, back to Show beating up RVD. Show misses a charge and ends up crotched on the top rope and RVD…can’t get the tag still. Show goes for the chokeslam and it gets turned into a DDT (as required in every Show vs. RVD/Sabu match) and RVD finally makes the tag…and it’s HALLOWEEN HAVOC 1995 MOTHERFUCKER.

Holly gives RVD an Alabamma Slamma on the chair (neck-first, because it’s RVD) and Show adds a splash.

Holly: ”You’re the dumbest son of a bitch I’ve ever met!”

Winner: No-contest (I’m a fan of the Flair turn homage, but it barely meant anything as Holly hasn’t been presented as RVD’s friend or even a good guy, he got respect from the crowd after that great match but that was it. Maybe Holly could have worked as a good guy if they gave him more time than a few weeks and better stuff to do than wrestle bad matches with Test. The show could do with more good guys near the top as Sabu’s lost trust in management, Dreamer’s a loser and Punk’s still at lower-level. So that leaves RVD and The Sandman. No wonder they needed Lashley.)

Overall: I’m enjoying watching the show shuffle to entropy but aside from Punk there’s nowt here worth flicking through. I’d pick this over Cyber Sunday 2006 though.

Also: Are there too many GIFs on these reviews? I feel I’m getting carried away with them to make up for the middling content.