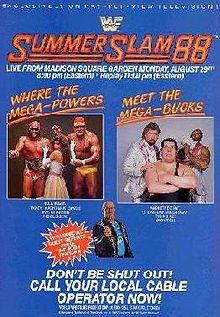 Match 1: The British Bulldogs versus the Rougeaus

Summary: Very entertaining opener, but a finish would have garnished it tremendously.

According to Monsoon, Brutus “The Barber” Beefcake cannot compete tonight due to the actions of “Outlaw” Ron Bass (aired 8/27, taped 8/3). On the PPV, a big red X partially distorted the screen, but you could still tell that Beefcake was BUSTED OPEN.

Summary: Despite the lack of offense in this match, Brown’s rocket ship continues to soar while Patera’s boat sinks.

Backstage, “Mean” Gene Okerlund interviews the MegaPowers with Elizabeth. No interview between them is the same without the awesome exaggerated handshake.

Summary: Rude had his wrestling boots on trying to carry JYD here. Yet, obviously, the Rude-Roberts house show circuit was ongoing so the finish seemed telegraphed.

After the match, Roberts clotheslines Rude over the top rope to the floor.

Backstage, Okerlund interviews Honkytonk Man with Hart. Being the consummate gossipmonger, Okerlund tries to reveal his opponent, but Honkytonk Man wants the world to be as surprised as he will be. Famous last words.

Match 4: The Powers of Pain (w/ the Baron) versus the Bolsheviks (w/ Slick)

Summary: The MSG faithful saw the Powers of Pain attempt to recreate the Road Warriors mystique but didn’t bite. Along those same lines, Von Raschke looked ridiculous with them as well.

Brother Love spews his venom then interviews “Hacksaw” Jim Duggan. After calling Brother Love a phony, he basically ignores him. Forgive me please, but I will too. Anyway, Brother Love mentions Dino Bravo as Duggan dismisses him. When Brother Love pokes Duggan in the chest, Duggan threatens him with the 2×4. Before Duggan could count to five, Brother Love smartly hightails it backstage. What a waste of time. Meanwhile, most of the MSG crowd takes a popcorn break.

Another promo for the Leonard-Lalonde fight on 11/7 only on PPV. Order NOW!

Summary: While short and harmless, this was the perfect way to extract the title from Honkytonk Man. No one expected the Warrior, and the upset brought the previously comatose MSG faithful to their feet. This was the point where big things were in store for Warrior.

After what appears to be an intermission, Heenan joins the broadcast team as the chants of “Weasel” rang toward him.

Summary: Yuck! Muraco tried to bring this match to an acceptable level, but Bravo was having no part of it.

Another promo for Survivor Series on Thanksgiving airs. Order NOW!

Backstage, Sean Mooney interviews the special guest referee for the main event—Jesse “The Body” Ventura. While Mooney insinuates that DiBiase’s stuffing money in Ventura’s pocket is a bribe, Ventura believes it was a donation. Political contribution, perhaps?

Summary: Standard finish with a new twist to the champions’ victory. Considering they had just won the belts at WM IV, it was too early to change titleholders.

Yet another promo for Leonard-Lalonde.

Back in the heel locker room, Okerlund interviews a hostile Honkytonk Man who emphatically wants to reclaim “(my) belt.”

Summary: The MSG faithful was prepared for an upset, but none was forthcoming. Showcase match for the WWF newcomer.

After the match, the Big Boss Man nails Ware with the nightstick while Slick distracts referee Earl Hebner.

Yet another promo for Survivor Series on 11/24 LIVE on PPV. We get the picture already!

In the babyface locker room, Mooney interviews the NEW Intercontinental champion Ultimate Warrior who gives a charismatic yet rather insane promo. He must be the most prolific wrestler from Parts Unknown.

Match 9: Jake “The Snake” Roberts versus Hercules (w/o Bobby “The Brain” Heenan)

After the match, Roberts removes Damian from the bag and covers Hercules with him.

We then revisit Superstars (aired 7/9, taped 6/21) where André the Giant and Heenan distracted WWF champion “Macho Man” Randy Savage so that the “Million Dollar Man” Ted DiBiase could nail him from behind sending Savage off the platform to the concrete floor. André and DiBiase then double-teamed Savage while Virgil held an on-looking Elizabeth. We then get an update from Craig DeGeorge from Wrestling Challenge “a week later” about a tag team match.

Next, Heenan accepted the challenge of a tag team match between André/DiBiase and Savage/player-to-be-named later on Superstars (aired 7/23, taped 6/21). DeGeorge then informed Heenan that the special guest referee was Jesse “The Body” Ventura. In response, the heels cackle maniacally.

On the 7/30 edition of Superstars (taped 7/13), Savage announced that his partner was none other than former WWF champion Hulk Hogan who joined the current champion on the platform. Following that, on the Brother Love segment of Wrestling Challenge (aired 8/21, taped 8/2), DiBiase stuffed Ventura’s pockets with several hundred dollar bills. Hey! Trips to and from Minnesota are expensive!

Summary: Savage and Hogan definitely shared the spotlight while Ventura’s involvement added some intrigue to the outcome.

After the match, Hogan, Savage, and Elizabeth celebrate in the ring.

Conclusion: With a hot main event and the history-making IC title victory by the Ultimate Warrior, this show contains both excitement and value. Assemble your family and friends, fire up the WWE Network, and enjoy this one.