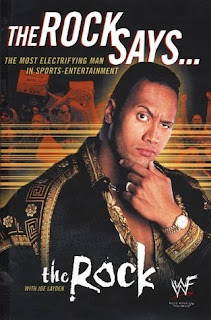 Well, they can’t all be winners…

It is amazing today, in 2013, to see the amount of wrestling books that have saturated the marketplace. There are books by wrestlers I never knew existed, or by some who you never thought would have ever gotten a book deal. This was especially true towards the late 90’s. Wrestling fans were viewed as uneducated yocals who would never read a book on a wrestler, if even such an animal existed. Sure, you had “Shooter” by Lou Thesz and a couple of others, but publishers did not view the growing wrestling following as a target audience. They were soon proven wrong with the release of Mick Foley’s first memoir, “Have a Nice Day.” What some fans may not (or likely do) know was WWF’s deal with Regan Books back then included biographies for two wrestlers: Mick Foley, and The Rock.

Where Foley’s book was wholly original, well thought out, and detailed a long, tumultuous and sometimes illustrious career, back in 2000 I remember saying to myself, “The Rock? Sure he is big, but how long has he been wrestling? How much can he really tell?”

The answer is predictable: not much. Don’t get me wrong, it has some really excellent insight into his life before wrestling. He was a High School Football standout in Pennsylvania. Prior to that, he had led quite the nomadic existence, as his father was Rocky Johnson, who led his family from territory to territory to make a living. Oregon. Texas. Tennessee. Florida. New York. Hawaii. Dwyane Johnson never had a chance to settle down too long and too comfortably anywhere.

Before I start slagging this book, I want to make it abundantly clear. The first few chapters are really good. Everything that documents the Rock’s young childhood to his time at “The U.” Rock always thought himself God’s gifts to women, and it leads to a somewhat hilarious scenario surrounding his senior prom. You see, the little Great One had a relationship back in Hawaii with a girl four years his senior, and he accompanied her to her prom. Morph four years later, and Rock is now in Pennsylvania, and the long distance thing is kind of working. Well, except for the fact that the people’s hormones were screaming and young Rock needed a little carnal relations at his new Smackdown hotel. So he had a second girlfriend while maintaining a long distance relationship with his initial love. Then his prom night came. He had promised the girl from Hawaii that he would return the favor, and have her as his arm candy for his Senior prom. Problem was, Rock also had the other girl. Feeling that he was some unstoppable gigolo, he invited BOTH. And they BOTH attended. Rock passed off the Hawaiian girl and the Pennsylvania girl as a friend he was doing a favor for. IT WORKED! That night at least. Soon both girls found out the truth, and both dumped Dwyane on his dumbass.

Rock had more going for him than just being Fred Garvin, Male Prostitute though….

Rock was a standout defensive end on this high school football team. Standout meaning the rest of the team sucked hot ass while he shined. Come Senior year, many major college programs were recruiting him,  and he verbally committed to Florida State. He had a bad visit to Pitt, Penn State showed almost no interest (thank Christ there in retrospect) but Florida State showed serious interest.

Rock did not want to be a Seminole.

The place Rock wanted to be was Miami, and he started the process of communicating with them to that end. Miami at that point in time was a fucking College Football POWERHOUSE. I hope people on this site realize what “The U” was like from 1986-2001. They always got the most talented players. They always had depth. They always drank the most, abused the most privileges, and basically were the cockiest sons of bitches in sports, pro or amateur. And Dwayne Johnson CRAVED that lifestyle. His machinations worked. He would be a Miami Hurricane under the tutelage of Head Coach Dennis Erickson.

Most freshmen College Football players get redshirted,  meaning they can practice full bore with the team, but will not dress for games. Dwayne Johnson wanted none of that. And his work ethic proved to help his career, as he was one of those rare college athletes not to be redshirted for his freshman year. He was the number 2 D-End on the Hurricanes behind future NFL Cowboys standout Russell Maryland. Unfortunately, as anyone who has gone through two a days and the very physical practices involved in football at its highest level, he suffered a setback. A separated shoulder on a cheap hit on a contact drill. Rock had his shoulder reset there on the field….but have you ever gone through that process? Trust me, it fucking HURTS. He recovered and the next year had a solid season.

By the time Rock was a senior, he was battling for time with a gentlemen named Warren Sapp. AKA Warren Sapp, future, first ballot, slam dunk NFL Hall of Famer. That season, Rock had aspirations of greatness and being a high pick in the forthcoming NFL Draft. Injury struck again, in his back and neck. Rock recovered, and was present when the Nebraska Cornhuskers defeated Miami in the National Championship game.

His significant other, Dany Garcia, was set to skyrocket in her career. Rock was nothing. He had failed professionally at football and needed a change. Change in the form of what his father could teach him. Change in what was in his blood. Pro Wrestling. Rock struck immediately, contacted his old man, and had to practically BEG him to train him. Rocky Johnson, knowing the pits and pratfalls of the biz, approached with apprehension. But Dwyane was adamant. And his father eventually capitulated.

Rock was a natural. He trained with his dad day in and day out, absorbing everything he could. It was quite the duck being introduced to water, to quote a lame term.

How good was Rock initially? Within 5 months of training, he was able to get into contact with Pat Patterson, then a big deal with WWF (And the main man missing from WWE these days, IMO) . He received a try out match with Steve “Brooklyn Brawler” Lombardi (these days Steve is the ultimate talking head on WWE DVD releases). Young Rock did well enough to earn a contract…that sent him to Memphis.

He was not there long. He worked hard, he asked questions, he did well. He was called up to Connecticut to work some matches with Tom Prichard at WWF headquarters, and acclimated himself well. Soon, he was called up to the main roster, and WWF used the name he did not want: Rocky Maivia, an amalgamation of his father and grandfather. He was packaged as a total 80’s-90’s babyface. It didn’t work.

Here is where I start to have issue with the book. Hindsight being 20/20, most fans back then didn’t buy into Rocky, what with Austin, Hart, Sid, HBK, HHH, all those guys doing essential cool heel acts. Rocky as a fiery whitemeat babyface was never going to work. So they turned him heel. And this book turns heel right then and there.

For you see, whereas Dwyane Johnson was amazingly candid about his journey to this point (even though there is way too much glossing over by the writer) he starts going in and out of character. Not in a good way, a way that makes a mockery of kayfabe. Those chapters are almost unreadable. Rock’s great heel feuds? Vs. Shamrock? Kayfabe. vs. Foley? Kayfabe. It is truly terrible, and you want Rock to follow through and actually talk about the angles that, you know, made him who he was.

Another problem with the book is this: It was written WAY too early in his career. The Rock was already a big deal in 1999, don’t get me wrong. But the man was on the precipice of becoming something even larger. He was about to become THE FACE of the company following Steve Austin’s neck surgery.

As a quick aside, Rock refers to Austin glowingly. He refers to Bret and Owen Hart glowingly. Yet, one line in the book makes a pointed jab at Shawn Michaels, and he barely mentions the guy that he got over with, HHH. Yet, there are some veiled things that could be pointed out in the book where he may or may not be mentioning HHH. It is incumbent on you, the reader, to find those passages.

The book basically takes the reader from Dwyane Johnson to the near peak of The Rock. It is fun, but it is not good. It is not a book I would recommend to any fan. And I am pretty easy with the reviews. That said, this is a book that was just attempting to take advantage of a wrestling market that was HOT. And no one was hotter in 2000 than the ROCK.

All in all, its a fair book. Fair. Written far too early. Give me a new volume, with everything that has happened since, with no filter? I am game. But stay away from this one. Unless you are a true sadist like me.