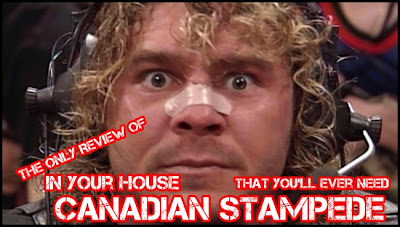 A great show, with perhaps the most over-rated main event in history. Join me, won’t you?

I had this one sitting around, so I figured why not. Everyone seems to be into the old WCW/NWA stuff, so I’ll continue on that. Any requests for an earlier show, just let me know. Oh, and I know there was a request for Slamboree 1998, but since Scott is on a Scott Sez recap of 1998 WCW, I didn’t want to step on his toes.

HHH vs. Mankind
Mick controls the first half of the match with
everything from over-the-turnbuckle flips to the channeling of Cactus Jack for
an off-the-apron elbow. The match turns to HHH’s favor when they produce a
moment we’d see hundreds of times in video packages, when Hunter whips Mankind
towards Chyna, and she powerslams him into the stairs, causing some damage to
his lower leg. Hunter works the leg, and it’s here we get a classic example of
why Mick is one of the greats. HHH whips Mankind to the corner, but Mick just
collapses, selling the leg so well. Few care about their craft that much. One
thing I can say is that Hunter and Chyna were fantastic together. Hunter is an
excellent prick at this point, and Chyna was a complete bitch, constantly
injecting herself. Great stuff. As for the match, it’s fantastic. I understand
they wanted to keep the ending as a goose egg for the blow-off at SummerSlam,
and with the match as great as it was, I don’t mind. The pull-apart brawl at
the end is awesome, and really has you believing these two want nothing but
blood. Sometimes I forget how great the early Attitude Era could be.
Hunter & Mankind are both counted out at 13:14
| ****

We get some footage of the Hart Foundation and
what was basically a week dedicated to them in their city. It’s actually sort
of sad, knowing what happier times these were for them, and how bad things
would get.

Taka Michanoku vs. Great Sasuke
They start off hesitant of one another and work
into a few submissions. The crowd is absolutely dead and doesn’t show any sign
of life until Taka takes a spinning back-kick to the face. He deserves the pop,
that kick looked brutal. Sasuke soon delivers another, in what’s seemingly turning
into a kickboxing match. Taka brings the crowd to life when he leaps to the top
rope and flies out to Sasuke, who’s retreated to the outside after a Dragon
Screw Leg Whip [I wonder how Mrs. Rhodes dug that]. Back inside, they really
bring out the flashy stuff that’s completely drawing the crowd in. Taka hits
the Driver, almost scoring the pin. That seems to piss Sasuke the hell off, as
he delivers a dropkick to Taka as he’s mid-air, and then soon a Scott
Norton-esque powerbomb and then bridges for the pin. Some really good stuff
that the crowd was dead for in the beginning, but Taka & Sas eventually had them
eating right out of their hands.
Sasuke hits a Thunder Fire Bomb for the pin at
10:00 | ***1/2

Vader vs. The Undertaker [C] – WWE Championship
It was supposed to be Ahmed but he’s out with a
knee injury, so Vader takes his place. Sounds like a win to me. The Undertaker
controls the beginning of the match with ease. Vader eventually gains control
when Taker turns his attention to Paul Bearer, who’s on the outside. He keeps
the abuse up, until he feels the need to do the ol’ Yokozuna nerve-pinch spot.
The lamest spot in history? I stand firm that it is. Twice, Undertaker tries to
mount a comeback, but Vader keeps him at bay. At one point, Vader straight up
kicks Undertaker in his graveyard, and later he returns the favor by
uppercutting Vader in his hangdang while he’s setting up for the Vaderbomb.
Tombstone finishes what was surely a better match than anyone expected. From
the reviews I’d read before, I was expecting more. This just didn’t have much
going for it, as it really seemed like Vader was merely lucky when he got
offense in, and was no real threat to The Undertaker.
The Undertaker Tombstones Vader for the pin at 12:39 | **3/4

The Hart Foundation vs. Stone Cold, Goldust, LOD,
and Ken Shamrock
The Hart Foundation each get their own entrance,
starting with Pillman and ending with Bret. The cheers keep building and
building, and they’re all clearly enjoying the hell out of this, with Pillman seemingly
having the time of his life. When Bret is beating Stone Cold down in the corner
and spits on him here in the beginning, that’s hands down the biggest face heat
I’ve ever heard in my life. They tag Shamrock in because someone in the back of
the arena wanted to hear the spots. There’s a point where Pillman runs in to
paint brush Shamrock, and you can see he’s clearly having an absolute blast
with all the face heat. Later, the LOD put Owen through the Doomsday Device,
with The Anvil breaking up the pin. I’d be thinking “Hey, where the hell
were you about 10 seconds ago when I was clotheslined into a back-flip through the
air?” Eventually, Owen is the one to pin Stone Cold, and thankfully end
this. Look, I know there are some people who can actually sit there and give
this 5 stars, but there’s NO WAY I could do that. I mean, a match with Goldust,
The LOD, and Ken Shamrock that’s going for half an hour? No way. This match was
insanely average, and insanely boring for the most part. There’s a reason why
the WarGames were the WarGames and not just a 5 on 5 tag, because it wouldn’t
have been that exciting. The heat was fantastic and such, and the beginning was
great, but this went WAY too long. Austin vs. The Hart Foundation felt like a
blood feud, the addition of the other four felt like nothing more than shoring
up the sides. They didn’t have the heat that Austin organically had, and
instead were booed by association. It really needed some other element to up
the excitement. Again, we’re reminded how awesome Stone Cold used to be when he
sneaks back by himself and just whallops Anvil with a chair. Definitely a match
worth seeing for the crowd reactions.
Owen rolls up Stone Cold for the pin at 24:31 | ***

Showcase Showdown: Just take a look at the
numbers, it’s safe to say it’s one of the best PPVs of all time. Even though I
don’t like the main event as much as others, I can’t deny how massive it was.
It has the largest, off-the-charts heat that I’ve ever seen. The undercard
is pretty damn great as well. I was hoping Taker vs. Vader would have delivered
a bit more, but what we got was nothing to scoff at. Taka and Sasuke had a hell
of a fight and brought something that most wrestling fans at that point had
never seen. Through sheer innovation they brought the crowd to life for their
match. Triple H and Mankind had one of their all-time best encounters, and showcased
why the early Attitude Era was some of the greatest work in the history of
wrestling.
Canadian Stampede is First Showcase all the way,
baby.

Much respect to my editor, Steven Ferrari. He and I first met when I put the entire Mandelbaum family in the hospital, and they could no longer roll the crepes for their restaurant. Well, Steven knew some Cuban guys [who turned out to be Dominican Republic] who could roll’em, and tadow. Of course, that meant Fuj lost out to Neil, but Fuj is a known loser, so it’s expected.

Str8 Gangster, No Chaser
– New article series known as Man Etiquette, so you’ll
know how to act in certain situations, I pay tribute to the burliest of
the burly from the 8-bit era, talk
about people who shouldn’t use the internet [all of them], Saved By The
Bell
Archives, Comic Book Films You Didn’t Know Were Comic Book Films, movie reviews, wrestling articles, and plenty
of other goods.
WCW In 2000
– Recently updated with the infamous Bash at the Beach 2000, and the Nitro after. You know
what’s shocking? The PPV is GOOD. No joke, it’s seriously good, and
features the best match of WCW’s 2000 year so far. Also, the Nitro following is good. It’s genuinely creepy, I tell you.
Man Movie Encyclopedia Vol.1
– NOW ONLY 99CENTS! THAT’S LESS THAN A DOLLAR! My book about action films. Endorsed by Scott Keith & Maddox, as
well as well as fellow BoD’ers The Fuj & Kenny Chill. 5 star average on amazon.
Board for the BoD’ers – We average about 50 people a day stopping by, a constant cast of people posting, and you can talk about anything you want.

Questions, requests, mailbag stuff, whatever, send’em on down to [email protected]