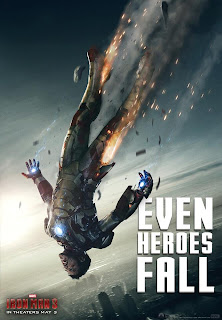 For the most part, unless I’m insanely passionate about a film, or really have a lot to say, I make my film reviews rather brief. Whenever I read other reviews of films, I just want the gist. So that’s what I’m going to bring to you. It’s just a warning, for all of those that will shake their fists in rage because I didn’t go over the cinematography, or the subtext of America’s effects on other countries.

If the Iron Man films had subtitles, than this one would be Iron Man 3: I Am Tony Stark. The whole movie is more about the man, than any of the other 2, including Avengers. This film focuses a lot more on the person inside the suit, and questions whether it makes him, or he makes it. I’m fine with that, because I dig Tony Stark, and I like seeing him in action. I think few people will walk away disappointed because there isn’t a lot of Iron Maning going on. However, it’s interesting to see Tony deal with problems & situations without the help of being practically invincible with grandiose weapons.

The plot, well, I won’t go into detail. Let’s just say I felt they sort of rehashed a previous one. I’ll also say this, there’s something I expected, something I wanted, something I was really looking forward to and did not get at all. Not in the slightest. I think that’s going to piss a lot of people off. I know I felt slighted. I found the main villain to be boring, without any depth or character, and not nearly as interesting, or charismatic as the previous films choice of bad-guy. Especially 2, which happens to be my favorite.

If you like 3D, then this will be the film for you. The effects are fantastic, and the action scenes are easily the most grand since Avengers, and go far and above any of the previous Iron Man films. The last 3rd of the film is worth the price of admission alone.

So, in the end, Iron Man 3 is a good film, but not as great as those that came before it. I will say it’s definitely head & shoulders above all of Marvel’s other trilogy end-caps. Even though I did dig Spider-Man 3.

– Caliber Winfield
more movie reviews and such at Str8 Gangster, No Chaser
Entire recap of the year 2000 in WCW at WCW In 2000
My book about action films, endorsed by Scott Keith & Maddox, average 5 star rating on amazon, and now available to you for 99cents, which is less than a dollar is available at Man Movie Encyclopedia