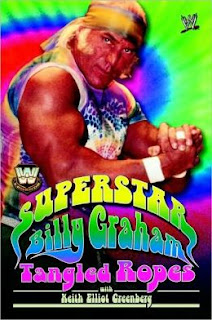 “Superstar” Billy Graham may be the single most influential figure to ever grace the squared circle. With a combination of stunning physical attributes and fantastic promo abilities, the Superstar was a wrestler who took wrestling by storm in the 1970’s, a man who was quite literally ahead of the curve.

Billy Graham’s book, “Tangled Ropes” is a harrowing look into the life and career of the man who was the single greatest influence on such more modern wrestling stars as Hulk Hogan, Jesse Ventura, and Scott Steiner. While it is true that his charisma and look affected these athletes, it is another side of Billy Graham that truly influenced wrestling for decades to come: steroids.

Graham pulls absolutely no punches in this book, especially when concerning himself. Born to an abusive father in Arizona in the 1940’s, young Wayne Coleman found refuge in weight lifting at an early age, especially after the wife of one of his workout partners bragged to the impressionable teenager that she liked to saunter around her house in the nude when her hubby wasn’t home. I hope one can read in between the lines and see where that scenario is going. Wayne also made his own homemade weights with coffee canisters filled with cement. Wayne was naturally a large man, and the weight training made him almost frightening. There are some pictures of Wayne in High School sprinkled throughout the book, and it is truly a man among boys.

Another passion Wayne developed at a young age was Christianity, as he became a born again Christian. These few chapters in the book are thoroughly engrossing,  as you can see young, naive Wayne Coleman being taken advantage of by some of the more radical, nutjob sects of Christianity. Wayne was oblivious to the obvious warning sights, and became a preacher in his congregation, attempting to show that just because you were a man of God, you didn’t have to be a wimp. It was at these sermons that Wayne developed the gift of gab, and it was about to lead him towards his future vocation.

Wayne grew weary of church life, particularly after his first three, count them, THREE marriages failed. He tried out for the NFL’s Oakland Raiders and the CFL’s Calgary Stampeders, but did not make the cut. Finally, a friend of his referred him to the wacky, wooly world of professional wrestling. More specifically, he referred him to Stu Hart.

Now, understand this. Stu Hart didn’t so much train the future Billy Graham. Not much in the way of bump training. No, Stu just stretched the ever living fuck out of Wayne Coleman. Eventually, after administering sufficient torture to the big man, Stu deemed Graham ready to wrestle. His initial gimmick in Stampede wrestling was challenging wrestlers and marks alike to arm wrestling contests. It was a gimmick that spanned many territories for Wayne Coleman, and helped make him a viable draw all over the country. But after three months of touring with Stu’s Stampede troupe, the Arizona boy grew weary of the bad weather and interminable driving conditions and decided to go home.

Back in Arizona, Wayne started working a club door as a bouncer. It was there that he met one of pro wrestlings most legendary figures, Dr. Jerry Graham. For the uninitiated, Jerry Graham may be the biggest wildman in wrestling history, both in the ring and out of it. Think Jake Roberts or Scott Hall are messes outside the ring? Those noobs couldn’t hold a candle to the good doctor. As a quick aside, most of the books I have been reviewing, such as Terry Funk’s book and this book, and others I have read but not had the time to do a proper review for, such as Harley Race’s and Dusty Rhodes’ books, have full chapters on the sheer madness that is Dr. Jerry Graham. He also happens to be Vincent Kennedy McMahon’s favorite wrestler when Vince was a kid. (yeah, bad grammar, I know). That explains a lot. The fact is, someone needs to write a biography on this certifiable lunatic before all the people who rode with him and bunked with him are six feet under and pushing up daises. Trust me, THAT book would be well worth the lucre.

Anyway, Wayne met Jerry Graham at this bar in Arizona, and Jerry liked the kid so much that he made him an honorary Graham brother, to go along with storyline brother Eddie Graham. They tried to set up a promotion in Arizona, but it was a carnival of errors and folly, as it never got up and running. Instead, the newly christened Billy Graham decided to test his fortunes in LA.

LA promoter Mike LaBell took in Billy and Jerry Graham as a tag team. However, Jerry Graham’s reputation preceded him, and LaBell made Billy personally accountable for Jerry’s actions. Suffice to say, that didn’t work out too well, and Billy was soon fired and left twisting in the wind for something Jerry Graham had perpetrated. Billy decided to try his luck with Roy Shire’s San Francisco promotion. It was here that Billy became tag team partner, and friend of, a wrestling savant named Pat Patterson. Patterson helped develop Billy into a credible pro wrestler and let Billy pick his brain at every available instance. It was here that Billy Graham became “Superstar” Billy Graham, and once that happened, Vince McMahon Sr. came calling.

Superstar was a phenomenon in every sense of the word in the then WWWF. He had a couple of starts and stops, but eventually defeated Bruno Sammartino to become the WWWF World Champion. He headlined card after card, sellout after sellout, at New York’s famed Madison Square Garden. Even as a dastardly heel, Superstar was revered in New York for his tremendous, and I mean tremendous abilities on the mic. It is hard whether to say if Billy Graham ripped Dusty Rhodes’ stuff or vice a versa, but they were both just mesmerizing on the M-I-C. They had a three match series in New York that culminated in a Texas Bullrope match that many fans still remember fondly to this day. Indeed, “Superstar” Billy Graham was riding high.

And then it all came crashing down, VH1 Behind the Music style.

For starters, Billy was a hardcore steroid and drug guy. Mind you, they were not illegal back then, but, as we have all learned, they are not healthy for you. The first sign of this for Superstar was when he was instructed to lose the WWWF Championship to bland babyface Bob Backlund. Billy was a prisoner of his own hype and did not want to lose the title to someone labeled “Howdy Doody” or “Opie” by both fans and wrestlers alike. He did the job in 1978, and was never the same man again. He spiraled into a deep depression, fueled by addictions to multiple drugs at this point. He took time off, and, much as my generation heard the old “Ultimate Warrior is dead….this is a different Warrior” rumors, Billy returned in 1982 as a self professed karate master. No one bought it. Billy was spiraling out of control, and only through the grace of god and his fifth (!) wife, Valerie, was he able to recover. Somewhat.

Billy returned to the newly christened WWF in 1986, but something was immediately awry: his hip. Years of steroid abuse had reduced nearly all his joints to bone on bone, and he needed hip replacement surgery. Mind you, this was a full 4 years before Bo Jackson had a similar procedure and had to end his football career. Superstar tried to persevere, but had to swallow a myriad of painkillers to even walk to the ring. He managed Don Muraco for a bit, tried commentary, but was in too much of a drug induced haze to continue on. Superstar believed that Vince Jr. had hired him in perpetuity, so when he was let go in early 1989, he became a bitter, bitter man.

I don’t think much needs to be said to any wrestling fan worth his salt for what happened after Superstar was fired. He waged war against the youngest McMahon. Billy is remarkably candid (or received one hell of a payout) about the steroid trials and ring boy scandals of the early 1990’s, saying he lied out of pure spite, only wanting a handout from Billionaire Vince. The most despicable thing he did, one I find personallu unforgivable, was the way he threw Pat Patterson under the bus in the ring boy scandal episode of the “Phil Donahue Show.” Pat Patterson was instrumental in getting Superstar’s career off of the ground floor, and the way Graham discarded a long time friend like that is unforgivable. Vince McMahon has forgiven Billy Graham, but Pat Patterson never will.

We all know the story from there: Billy gets back in Vince’s good graces, is inducted into the WWE Hall Of Fame (Shame?) and all is right with the world.

Well, that is where the book ends, but Billy Graham continues, post publication, to be an enigma and contradiction. But that is neither here nor there.

The fact of the matter is this: this book is a must read for any wrestling fan, or so called fan of the mat games. It is refreshing candid, but I would remind the reader to do his/her research, and take several parts of the tome with several shakers of salt. Still, it is one of the better reads provided by the WWE arm of publishing, and I would highly recommend it to any fan. Going on the “Buy It/Read It/Trash It” scale?

Read with an option to buy.