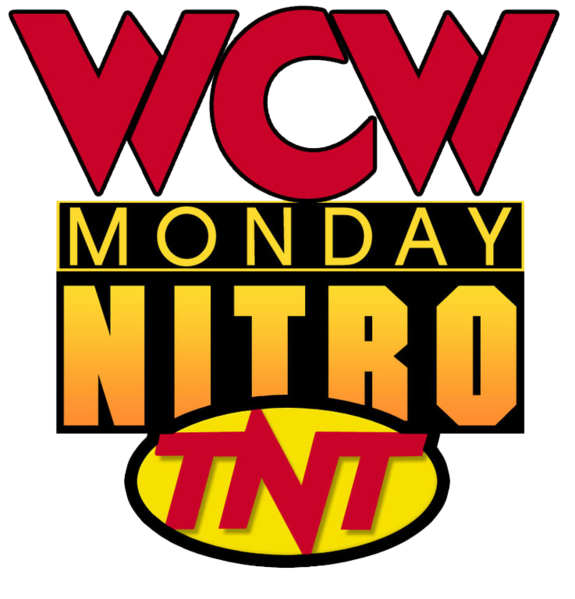 Can Goldberg win the big one? What does “Hollywood” Hogan have in store for him? What’s going on with Jericho? Who makes a triumphant return?

After the WWF has already taped RAW for this Monday, WCW counters with its own World title match on Nitro in the Georgia Dome in front of the biggest portion of Goldberg fans on the planet. Buckle your seat belts, folks! This is going to be a bumpy ride.

As you may know, I’m not the biggest fan of listing too many commentating gems, but Schiavone coins hyperbole right off the bat: “the professional wrestling capital of the world—Atlanta, GA.” Some would beg to differ.

In the ring, the Nitro Girls dance in black and silver glitter, and Schiavone’s in a tuxedo at the broadcast table. Fancy!

Hogan strums the World title as he emerges into the Georgia Dome. LOOK AT ALL THOSE SIGNS! He’s joined by Bischoff, Disciple, and Elizabeth and blathers his nonsense. While a smattering of “Hogan sucks” chants are overheard, Hogan cuts a promo about the upcoming monumental PPV tag match and butchers the “sleeps with the fishes” line from The Godfather.

Next, he refuses to defend the World title against Goldberg and runs him down. Instead, he promises a returning nWo Hollywood member to face him. The “Gold-berg” chant erupts, and Hogan promises to beat Goldberg should he win. So, we get not one, but TWO possible Goldberg matches tonight.

Nitro is sponsored by Valvoline.

THE FOLLOWING ANNOUNCEMENT HAS BEEN PAID FOR BY THE NEW WORLD ORDER:

THE PRECEDING ANNOUNCEMENT HAS BEEN PAID FOR BY THE NEW WORLD ORDER.

Summary: Distraction finish aside, this is a good matchup given more time.

After the match, Jericho cackles about his nefariousness.

Goldberg does pushups on chairs. Considering the look on his face, the cushions might have popcorn farts in them.

Summary: This has PPV match written all over it, but Saturn versus Raven is even juicier.

Afterward, Lodi tries to intervene on Raven’s behalf, but Saturn explodes with an overhead belly-to-belly suplex. Kanyon gets involved but eats a Death Valley Driver from Saturn. Returning to work on Raven, Saturn hits a head-and-arm suplex. He pulls a table from under the ring and sets it up at ringside.

Upon putting Raven atop it, Saturn mounts the top turnbuckle and splashes Raven. Unfortunately for Raven, the table DOESN’T break. He returns to the ring only for Kanyon to score with a Flatliner. These two will team up on Thunder in two days. That table’s almost as stiff as a Kevin Von Erich match.

Outside the Georgia Dome, a black limousine arrives, and Buff Bagwell, wearing a cervical collar, emerges with assistance from his mother Judy. I thought this episode’s quite stacked, but it’s also STUFFED.

At the entrance, the Nitro Girls dance in silver.

We revisit last week when the 18-wheeler containing both Malone and DDP was headed to the Ice Palace in Tampa. Although nWo Hollywood’s ready for them, they almost got steamrolled. Malone and DDP jumped into the ring with chairs mid-Hogan promo and scared the BEJEEZUS out of him. In a moment that Malone probably won’t ever forget, he slammed Hogan to a raucous ovation.

In the ring, Okerlund plugs the PPV and interviews DDP and Malone. Why isn’t this segment happening between 9-11PM? As Malone leans on an unsuspecting Okerlund, the Atlanta faithful showers a “D-D-P” chant upon them.

DDP cuts a promo on Hogan and adds “scum” as a nickname to him. Meanwhile, Malone offers this gem to Rodman: “I’m gonna whip you like Madonna should have whipped you.” HA! Also, he’ll be a “Rodzilla killa.” They exit and disappear through the Atlanta faithful.

We replay the Steve “Mongo” McMichael interview from Thunder. For those unaware, former Chicago Bears head coach Mike Ditka puts him over. That’s some high praise.

Summary: Worldwide main event that had no business being on this episode.

Back in the locker room, Goldberg headbutts a locker.

THE STREAK: Goldberg defeated Hugh Morrus for victory #1 on September 22, 1997.

Another black limousine arrives, and Scott Hall emerges to tremendous praise from nWo Hollywood. Briefly, he calls out Goldberg. Can Hall beat him? I guess we’ll find out soon enough. In the meantime, Rude’s rockin’ the high-and-tight buzzcut for the elevated Georgia humidity tonight.

Prior to the next match, Jericho informs us that neither Dragon nor Malenko is the #1 contender. Alternatively, Rey Mysterio, Jr. is said wrestler according to him. JJ Dillon looks on with concern and joins him in the ring. First, his ruse with “Mysterio” last week on Thunder doesn’t “fly with the Executive Committee.” Second, he’ll face Dragon tonight although Malenko joins the party. Third, he deems “no physical contact” prior to the PPV between Jericho and Malenko. Should any occur, the match will be cancelled.

Jericho tries to bait him, but Dillon halts the shenanigans…until Jericho implies that Malenko’s mother had an affair by saying that Dean and Joe don’t resemble one another. Angry, Malenko takes vicious exception and clobbers him. WCW Security pulls Malenko off Jericho but can’t contain him.

Summary: Too limited to be worth much, but the Malenko-Jericho war continues.

Following the match, Malenko pounds Jericho mercilessly until WCW Security pulls him off. In the process, Malenko rips out some of Jericho’s precious locks of hair.

During the break, Atlanta’s finest handcuff Malenko to remove him from the Georgia Dome.

At the entrance, the Nitro Girls dance in raspberry as Heenan joins the broadcast table. During which, Schiavone shills the Nitro Party contest.

Prior to the next match, Swinger grabs the microphone and identifies as “the hottest young commodity in wrestling today.”

After the match, Chavo grabs the microphone and his scissors. He informs Swinger that he has “split ends.” HA! Next, he cuts Swinger’s hair, dedicates it to Eddie, and challenges Eddie to a hair versus hair match at the PPV.

THE STREAK: In Baltimore, Goldberg defeated Glacier to become 25-0.

Nitro is sponsored by Compuserve.

Back in the locker room, Goldberg warms up.

Summary: Solid double-team moves in the ring, and the table spot to Magnum was exciting. I smell future matches between these two coming to an arena near you.

At the entrance, Okerlund interviews Buff Bagwell. This is Bagwell’s first TV appearance since his injury on April 22. Okerlund describes Bagwell’s injury as a C4 and C7 fracture. To give you an idea how serious this was, see Kurt Angle’s two broken vertebrae during the 1996 Olympics. Nonetheless, Bagwell yells “I love Atlanta” to a raucous ovation, appreciates the support from the Atlanta faithful, and values his mother’s support tremendously.

THE STREAK: On February 26, Goldberg defeated Rick Fuller to become 50-0.

Match 7 for the WCW US title: Goldberg (champion) versus Scott Hall

Summary: Nervous much? Goldberg was a bundle of nerves, so Hall corrected the situation and made him look like a million bucks. Goldberg became 107-0.

Summary: THESE guys had to follow Goldberg. Yikes! Where was Putski versus Riggs? Nobody would shine in this spot after the previous match.

Following the match, the Flock jumps into the ring and ambushes Guerrera.

THE STREAK: In Colorado Springs, Goldberg defeats Raven to reach 75-0.

Here are the results:

Promo airs for Bash at the Beach ’98 this Sunday on PPV. Order NOW!

Afterward, Giant grabs the microphone and cuts a promo on Kevin Greene. He challenges Greene one-on-one at the PPV. Instantly, Greene emerges and heads to the ring. When Giant asks if he wants some, Greene spits in his face. Giant tries to behead him, but Greene ducks and clotheslines Giant over the top rope to the floor.

Summary: Showcase match for DDP who is O-V-E-R.

Before the next match, Nash grabs “the stick” (c/o Schiavone). Konnan runs down his catchphrase with his hand DOWN THERE.

Summary: They must be running long to give them such a quick squash. Then again, I’m sure Sting and Luger eat plenty of veggies.

THE STREAK: Earlier tonight, Goldberg extended his streak to 107-0 over Hall.

Nitro is sponsored by Master Lock. Methinks they’ve locked in the ratings win this week.

Summary: Smoke and mirrors along with heel shenanigans allowed Hogan to carry Goldberg through this absolutely historical match. Whereas Andre passed the torch to Hogan by getting slammed, Hogan passed the torch by getting Jackhammered. Despite its mediocre rating, this match is a MUST SEE for all wrestling fans. Simultaneously, Goldberg is 108-0.

Following the match, the Atlanta faithful ERUPTS like Mount Vesuvius. Fireworks explode as Goldberg holds both belts up high. Echoing throughout the Georgia Dome, another extremely LOUD “Gold-berg” chant showers the new World champion. To end the show, Goldberg stands at the entrance holding up both belts amid fireworks and adulation from the Atlanta faithful. According to Goldberg, his Atlanta Falcons teammates joined him after the show, and Goldberg relishes that moment to this day.

Conclusion: One of the best Nitro episodes to date. Each segment minus one or two contained a wrestler of name value that offered either a quick but decent match or interview segment.

Without question, this episode is can’t miss TV. You owe it to yourself to watch it if only in separate installments. Three hours is a lot to digest, but WCW gives you your money’s worth here.

As far as the argument over whether or not WCW should have saved this for PPV goes, here’s my $.02.

The Hell in a Cell match became instant water cooler chatter and made the WWF must-see the following night. To top it off, the WWF hot shot a rating by giving the RAW audience not only a World title match but also an Austin victory to regain the title.

What can WCW do to halt the momentum?

The ink was already dry on the Hogan/Rodman versus DDP/Malone match for the PPV, so Hogan versus Goldberg couldn’t happen. WCW’s next PPV is held in Sturgis. You can’t give a PPV main event like that to a free audience. I’m surprised they used Jay Leno for that show in the first place.

September? Fall Brawl? Plans were already set for Warrior’s return. He had to be involved with Hogan in some capacity. October? Halloween Havoc? That had Hogan-Warrior II scheduled. Beyond that, Goldberg’s character would have been wasted.

Instead, WCW used its intelligence to produce this episode and hype a HUGE main event after WWF had already taped RAW the previous Tuesday. On top of that, they had 40,000 paying fans in the Georgia Dome (Goldberg’s hometown) to witness it and Turner executives in tow to see how successful WCW was. Despite possibly losing millions of dollars in PPV revenue, WCW popped a rating to elevate a new star in pro wrestling.

What’s on RAW is WAR?

Comments? Suggestions? Send them to me at [email protected] and follow me on Twitter (@rockstargary202). Also, please check out all of my reflections at rockstargary.com including WCCW from 1982 into 1986 and Herb Abrams’ UWF!