Can Martel retain the AWA title? Will Rhodes finally defeat Flair for the NWA strap? Can Magnum retain against Blanchard? What will the Soviets do to the Road Warriors? Will Slaughter survive against two Soviets? Let’s jam!

In the cold open, Schiavone interviews the Road Warriors who are ready to destroy the Soviets. 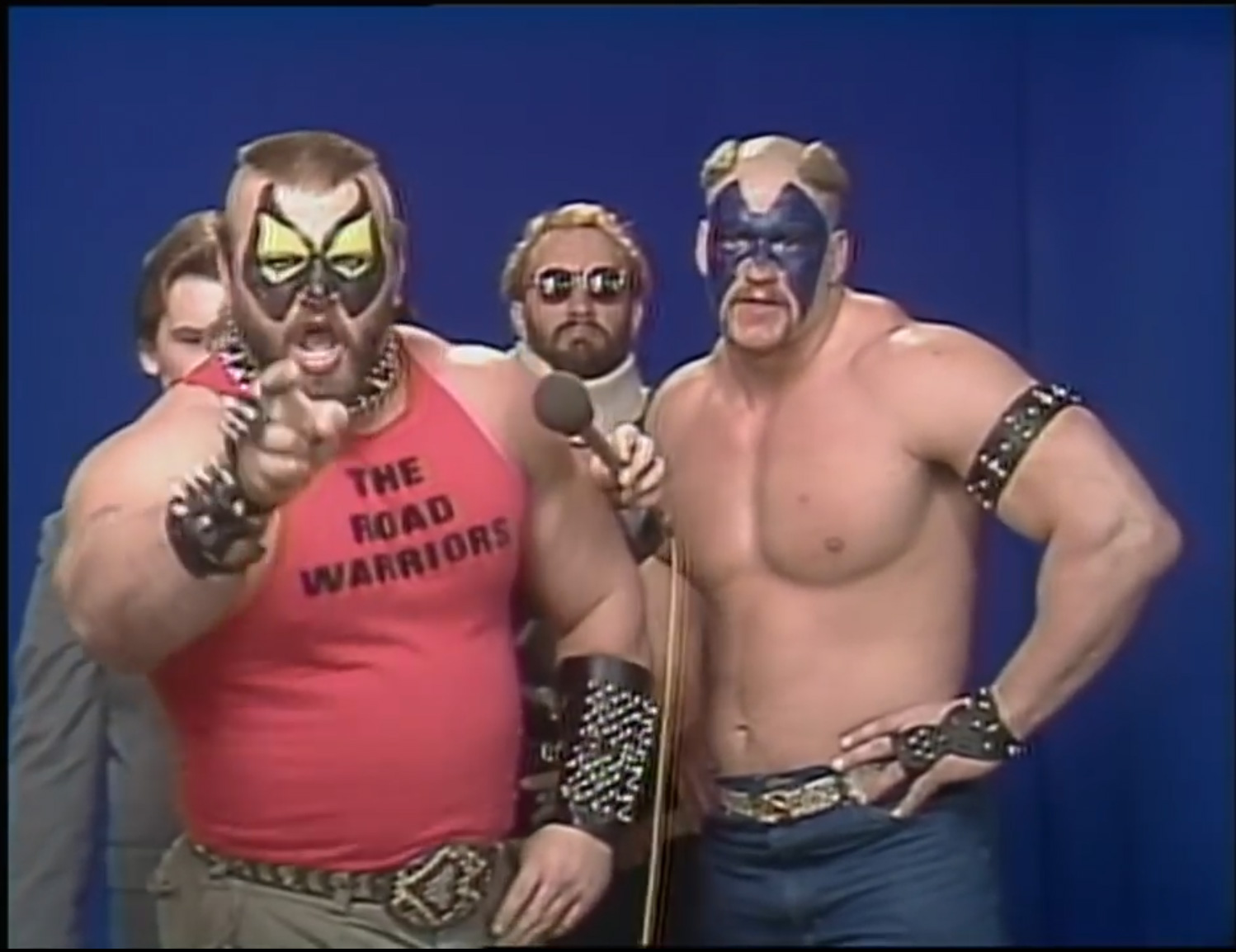 Afterward, Schiavone interviews Blanchard with Baby Doll. Blanchard’s ready to regain HIS title at the expense of Magnum’s eye. 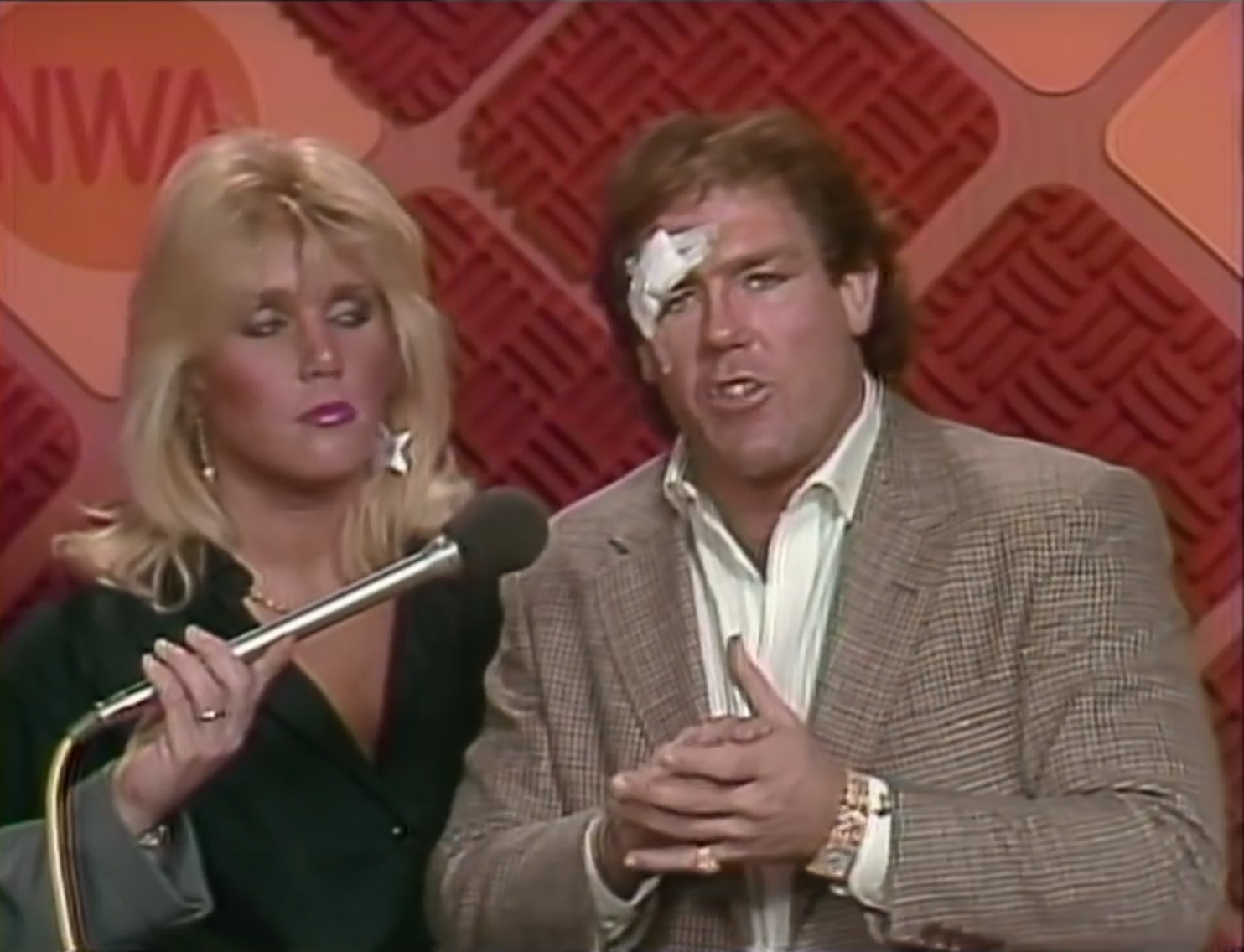 Next, Schiavone interviews the Rock’n’Roll Express who are ready to get “hot and nasty.” Ew. 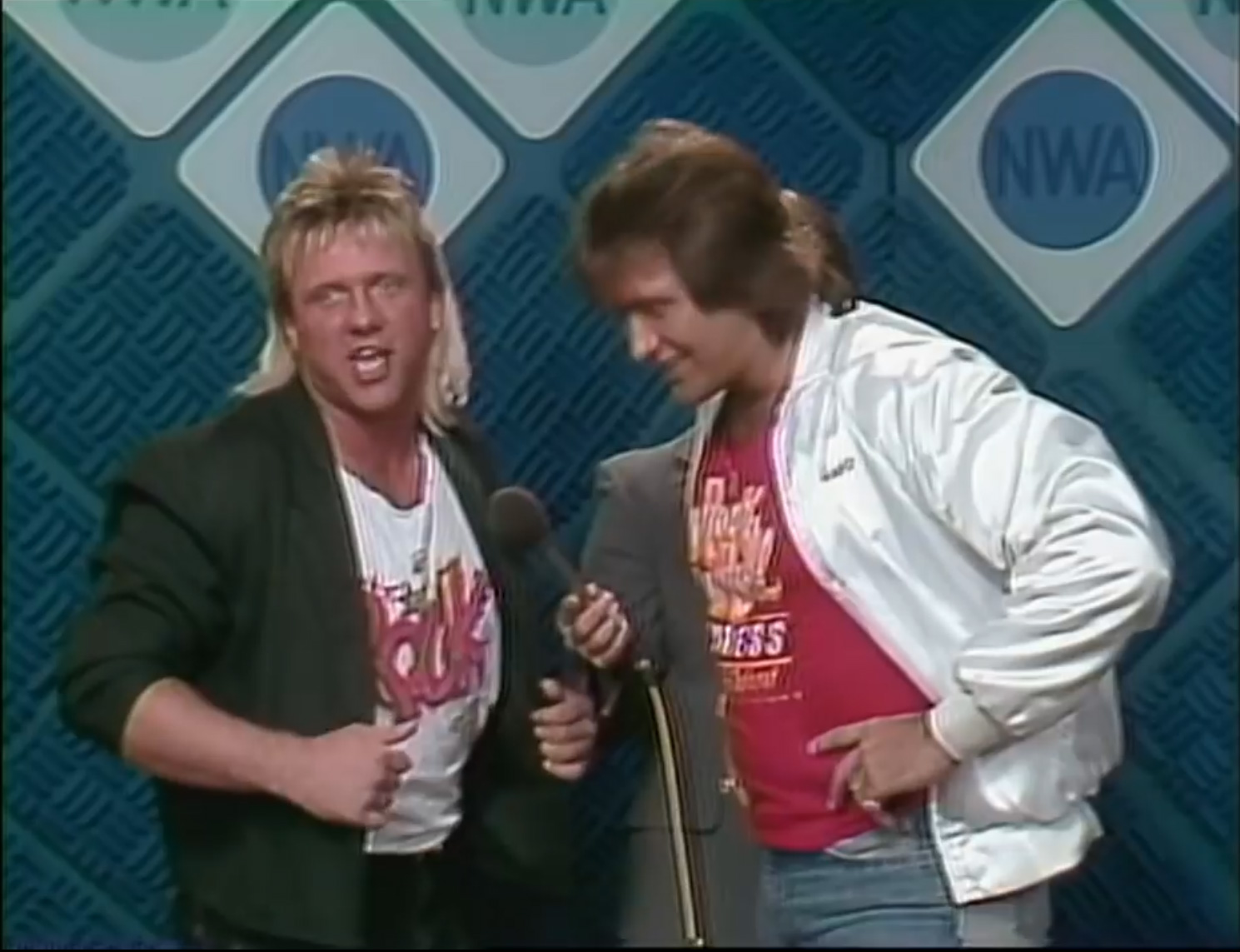 Summary: While I realize that Dillon had been an accomplished wrestler, he was a manager at this point. This match should have seen Bass destroying Dillon from pillar to post. Instead, they bored the Jersey faithful, and the match was a horrible opener.

Summary: Comedy match that was better than the opener.

Summary: The lack of chain wrestling made for a total snoozefest.

After the match, Sherri clobbers Combs with the belt before hightailing back to the locker room. That is more exciting than the match.

Summary: Methinks the Jersey faithful had NO CLUE who Colon was yet had seen Barbarian on TBS eating Randy Mulkey for breakfast. Therefore, their reaction for Barbarian was positive albeit unexpected and contrary.

After the match, Jones raises Barbarian’s hands in moral victory, grabs the microphone, and vows to return to a great response.

Summary: Sound psychology by Roberts to work the neck. Roberts generated great heat from the Jersey faithful, so when the Road Warriors interfered, their pop was tremendous.

After the match, the Road Warriors hit a double shoulder block to Roberts followed by a Hart Attack. They toss Roberts over the top rope down to the floor like he’s last nights’ garbage.

Match 6 for the NWA World tag team titles: The Rock’n’Roll Express (champions) versus the Long Riders

Summary: Considering the dreck that led up to the match, this match was exciting and fun to watch. Great work, gentlemen!

After the match, the Long Riders dispose of Gibson and try to destroy Morton. However, Gibson grabs Morton by the leg and drags him to safety much to the delight of the Jersey girls. Perhaps Morton’ll take some of them shopping since it’s their favorite sport.

Summary: Can you tell the Cold War was in full effect? The heat for this match was off the charts while the workrate stunk like Elizabeth, New Jersey.

After the match, the Soviets try to double-team him, but Slaughter sends them packing.

Summary: Superb bloody brawl that told a great story where Blanchard made Magnum look like a star.

After the match, the Jersey faithful continued to harass Blanchard with an “I Quit” chant.

Summary: Fantastic match without a dull moment for a second. Nevertheless, the Dusty finish did NOT sit well with the Jersey faithful. I’m not sure how many knew about it then, but this was the same finish to the Bockwinkel-Hogan match at Super Sunday, and it wasn’t kosher then either. At least we know why it didn’t headline as the Jersey faithful would have rioted. Since Jersey wasn’t terribly clean, you probably couldn’t tell anyway.

Summary: Enthralling high-impact match where the Soviets tried to steal one from the Road Warriors, but Ellering was too smart for them.

After the match, Krushchev grabs the chain and ANNIHILATES Ellering with it. If that’s not enough, Ivan whips Ellering into a double clothesline by Nikita and Krushchev. Animal snares the chain away from Krushchev, and the Soviets scatter like flies.

Summary: Fascinating story as Hansen tried to pin Martel but couldn’t. Using a ton of psychology, Hansen destroyed Martel’s back yet cheated his way to a World title victory. Merry Christmas, Stan Hansen!

Conclusion: An historic card with several good matches and a World title change. Although the first few matches may not be your cup of tea, the string of matches at the end are well worth your time.