Although Rude quit WWF, he still has a year left on his completely valid contract, and so he won’t be going anywhere else for the time being. Rumor is that he wants to join the new UWF because of the easier schedule. The NWA would really like Rude, but the WWF has already made it well known that they will strike down with great vengeance and furious anger on those who would attempt to breach their contracts. So Rick is gonna be sitting for a while.

Herb Abrams did another taping on 10/11 in Reseda and it apparently went smoother than the first one, drawing 125 people. Herb is still really terrible on commentary.

The Rick Rude speculation would only get more entertaining.

We’re on a fresh set of taping so that means some fresh new talent like forty-eight year old Ivan. The fake crowd noise is so loud that you can’t hear the ref’s count on the mat. Or as they call it in 2021 “Thunderdome-esque.” Koloff is still in ”top physical condition” insists Herb, who reminds us Ivan’s been in a few wars. Aye, the Napoleonic ones. Hard pounding action from Koloff with only DeLeon slipping on a crossbody attempt breaking up the poundage. Koloff smacks DeLeon with some non-folding chairs as the ref does nothing. There’s two more shows after this to record, he’s got to conserve his energy. Koloff keeps on sneaking in chokes and that’s a virtually dead art nowadays so I enjoyed being reminded of that tactic. Match drags on for a bit until Koloff is polite enough to come off the top rope for the Russian Sickle.

Winner: Ivan Koloff (Koloff was able to generate boos that were audible over the hair dryers Herb was paying for crowd noise so I’d say this was a success. Ivan whips Stephen with his chain afterwards and promises the same for Nikita

Another wonderful thing about the UWF is the constantly changing colour design of the logo. The show starts with the green/orange/purple thing seen in the GIF above but the logo above the entrance is white. Current favourite is the unreadable gold-on-gold design used for certain match graphics to let you know this dude’s special. 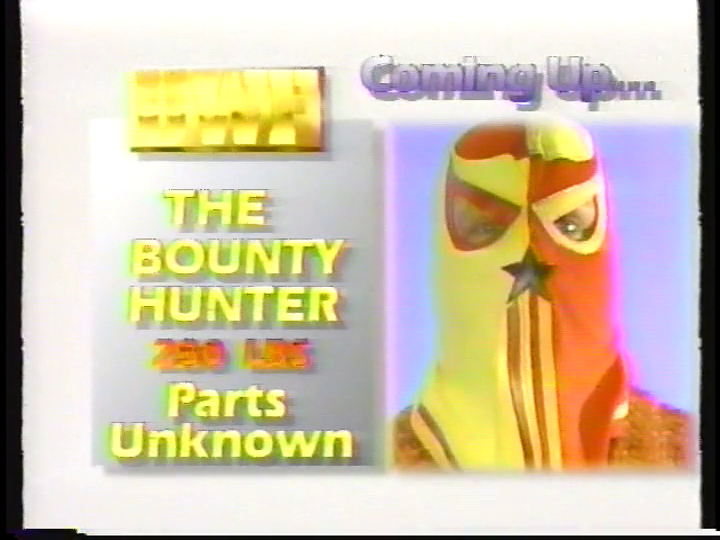 Bounty Hunter is an unremarkably large guy but he’s a prop for Tolos anyway. Hunter keeps asking Tolos for advice until eventually Moore pops over to do something, allowing Tolos to grab his foot and allow Hunter to get a running powerslam and after some government-work levels of effort, a running splash to end.

Winner: The Bounty Hunter (Simple squash for a simple wrestler. Post-match Tolos wants to know why the big guys aren’t here and assumes they’re hiding behind their mothers so he throws the jobber out the ring himself. It’s always a good sign when your manager outclasses you in your debut.)

We’re at that part of Koloff’s career when he denounced steroids and then showed up in WCW a year later built like Zangief from Street Fighter. Ataki tries to sneak attack Nikita (sadly without Herb yelling about “shades of The Battle Of Port Arthur!”) which ends with him getting d-ataki-pated with the Russian Sickle.

Ivan waddles out afterwards to wreck Nikita with a chain. Sadly there’s not many places to pop out of so he appears directly in front of Nikita with the speed of Austin Powers on the steamroller.

No interviews to hype this up, unless you count the chroma key green screen “wow the UWF sure is great compared to uhhh I dunno, typhoid I guess” promos they air beforehand, but Cactus got DQ’d against David a few weeks ago. Cactus was also cheered over the intended good guy David so obviously booking him in a match that works to Cactus’ strengths will help shift the balance. Crowd immediately goes nuts for Foley as he backdrops David while still wearing his entrance gear before using it to choke Dave. Big “CACTUS” chants while Bruno tries to think of something to say. He seems bemused why people would be cheering this shhhhhlime. Cactus knocks David onto the concrete with a running elbow but another one gets turned into a backdrop onto the concrete, which Cactus sells for two seconds. David nails some beautifully loud chops onto Cactus before kicking him in “the buttocks area.” Thanks Herb. David lands two standing knee drops and Bruno says “that would usually be enough to end a match.” From who, Oscar Pistorius? Cactus low-blows David and Bruno’s disgust is magnificent as he tries to argue Cactus should be DQ’d in a No DQ match for that. Cactus launches a bin at David and rubs rubbish into him. Jack slaps David across the face but Sammy David Jr. refuses to go down and continues throwing those wonderful chops. When it actually sounds like the crowd will get behind David, Cactus uses a hidden object to KO and pin him with his feet on the ropes. To booming cheers.

Winner: Cactus Jack (If it was intended to get David over then this was a failure but watching early Foley bump all over the place and blow 1990 audiences’ minds made it worthwhile. Even Herb explaining that Jack’s pin wouldn’t have counted if the referee had seen it IN A NO DQ MATCH couldn’t overshadow Bruno’s fury.)

I’ve never seen Patera’s glory years, just his 1988 run when the commentators were openly criticizing his performances. Basic slow inaction until the crowd start chanting ”Jailbird!” at Patera hahahahaahaha. Bruno doesn’t think that’s very nice. ”I don’t think he was ever guilty, I got told a fan threw a rock through the window and Patera got the blame.” Ken could have used Bruno when he was in court, he’d have explained how slamming the police officers was as easy as picking up a glass of water for Ken. Ken at least works the crowd and keeps on torturing Robbie to get the chants coming until finally submitting him with the Full Nelson. Post-match Patera continues to heel it up by challenging Billy Jack to a match, oh no.

Winner: Ken Patera (Match was absolutely nothing but the ”Jailbird” chants and the damage control on commentary were fucking hilarious.)

Lou introduces Ken Patera as ”The Man’s Strongest Man” before sadly letting Patera talk. Debra at Backlash 2000 was more coherent. They bicker about Bruno and 1977 and nothing is said.

In the highlight of the show, Orndorff makes his entrance to MC Hammer’s Can’t Touch This. This is Bob’s UWF in-ring debut and he’s one of my favourite wrestlers to go back and watch, just a wonderfully animated guy. Orton blocks a backdrop with a backslide and the crowd’s hyped for a main event going two minutes. Orndorff slams Orton, who gets up then falls to his knees yelling OWWW MY BACK. Orton insists he’s hurt so Paul lets his guard down and gets rightfully sucker-punched. Orton stomps the shit out of Orndorff as the boos for Bob get louder and louder. Orndorff eventually blocks a backdrop with a low punch to punch Bob and he sells it like he’s been shot in the face.

Orndorff sends him into the turnbuckles and Orton nearly falls out the ring. We get The Best Of Bob Orton Selling as Orton won’t stop bouncing off Paul and trying to prevent his’s comeback until Mr. Wonderful has enough and hurls him over the top rope. The ref starts counting Bob out, Orton gets on the apron but Paul knocks him to the floor and the ref continues counting to ten and Bob loses. Huh?

Herb & Bruno explain the ref messed up and should have reset his count when Bob was on the apron and agree the heel got screwed. So either it was a botch and was terrible or it was planned and it was terrible. Pick one.

Winner: Paul Orndorff (Like an under-rated tag team, this was Pretty Wonderful until the finish.)

Overall: Thanks to a white-hot crowd, even the crap on this show was fun to watch. From the logo changing colour to “Jailbird” chants to early Cactus Jack, it’s never dull with Uncie Herb.