The Dangerous One no-sells a cross-body and pounds away on Allan, repeatedly picking him up at two just to fuck with him some more. Like the previous two weeks, this does not have the desired effect and the crowd love Spivey dissolving the jobber. Bruno calls Spivey’s powerbomb a “backbreaker” and that’s enough for Blair to run out and chair-shot Dan in the back of the head, just like Dan did against The Road Warriors at Clash Of The Champions.

Winner: Dan Spivey via DQ (Why would you boo Spivey?) 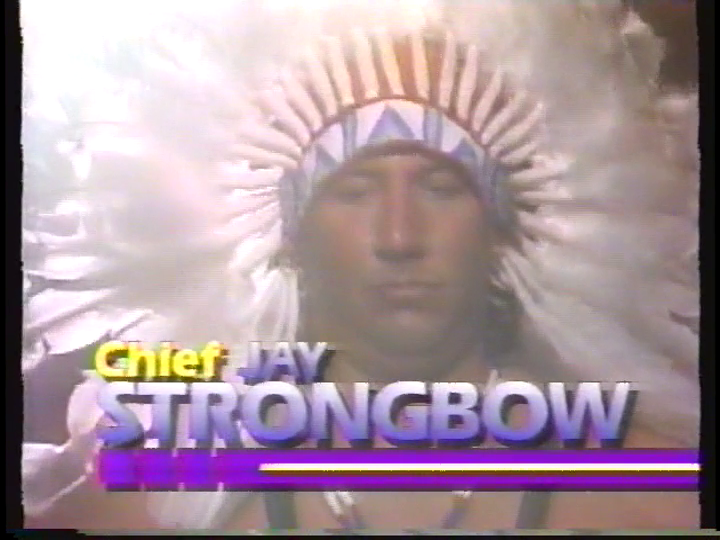 In a sad sight, Bruno treats Chief Junior as if he’s the actual Jay Strongbow, a man he wrestled many times in the WWWF. Houdini assaults the Stars In Their Eyes runner-up with knee-lifts until Junior Jay crotches the jobber and slams him on the concrete. Junior busts out the War Dance to rev up his Injun to no reaction before winning with a sleeper hold.

Winner: No One (Sitting Bullshit looked horrible out there, completely blown up in seconds and letting the jobber do all the work. He was a Strongbow alright, and by that I mean “an over-priced, low-tier Cider.”)

If you ate a salad every time Bruno mentioned how lean David is looking, you’d still not be as lean as David. Because of his skinniness, DeBeers is able to see clearly that the referee standing behind David is in fact, a black man. ”I don’t know if you can understand English, but I want you out of my sight!” Woof. We get a shot of Commissioner Ross at ringside who is apparently in charge of the UWF. And he does…absolutely nothing so Larry The Ref stays and counts a David surprise rollup. DeBeers kicks out though and does a runner. David catches him coming in and gives him a backslide for another two-count. I’m surprised those weren’t the finish, Larry’s a very forgiving guy to not quick-counting DeBeers. That would have been the preferable to watching David not get crowd support against fucking apartheid. DeBeers kicks Larry as he’s caught in David’s arms for a scoop slam so DeBeers uses this opportunity to stomp the hell out of the ref before running away.

Winner: No One Again (All over the place like a dog’s dinner but the insanity of DeBeers’ gimmick is keeping this show afloat.)

The Black Knight vs. Davey Meltzer

The Black Knight gets a proper entrance (complete with Night Train by Guns ‘n’ Roses) as they’re trying to pretend he’s not a jobber due to a lack of wrestlers falling for Herb’s coke logic. Knight starts suplexing Davey around but one fan chants BORING so loud, Knight is forced to stop wrestling to tell him to ”shut up!” After ten minutes of Knight alternating between clotheslines and chinlocks, Davey makes a comeback (!) but sadly he wrestles as quickly as he gets to the point on WOL so Knight is able to cut him off and win with a Sidewalk slam.

Winner: The Black Knight (Instead of wasting your time watching this rubbish, I recommend listening to the Black Knight 2000 Pinball soundtrack instead.)

B. Brian Blair vs. Riki Ataki

Crowd haven’t been overwhelmingly supportive of the supposed top babyface Blair so far and not even coming out to AC/DC’s You Shook Me All Night Long is helping his cause. If AC/DC can’t make you likable, it’s time to hang up the buzzers. Bruno: ”The name Riki doesn’t sound very Japanese does it?” Ataki connects with a Reverse Atomic Drop but Blair sucks it up and comes back with a clothesline and a powerslam (called a ”flying body press” by Herb) and wins with The Scorpion Deathlock.

Winner: B. Brian Blair (Herb may as well have yelled BUZZ BUZZ into his head-set to help drown out the boos for Blair because the crowd isn’t having any of his dullness.)

Orton lets Albano burn himself out with his one-liners before getting a chance to talk about how great he is. Wise man. Lou at least uses the ”if you put my brain into a parakeet, it’d fly backwards” line that Hank The Angry Drunken Dwarf would make famous. This went nowhere because Orton’s not doing anything yet.

Haynes makes his way to the ring while accompanied by My Michelle so the sound guy must have only brought his copy of Appetite for Destruction with him tonight. Mr. Brownstone would have been way more appropriate for Billy Jack. After some plodding action Billy Jack gets a chinlock, follows it with an small elbow and….wins because the jobber was too crap to kick-out before three.

Winner: Billy Jack Haynes (I’ve seen some bad jobbers in my time but I can’t recall one so out of shape, he couldn’t kick out. Crowd cheered after it was over so you know it was a real Jungle Boy vs. Omega affair.)

OK this could be good, both men were still “on” in 1990. Death misses a charge into the corner and Paul gets a quick roll-up for two and counters an Irish Whip to a Sunset Flip for another two. Williams lands a Pony Express football tackle so he can focus on Paul’s leg. Paul regains the advantage but remembers to hobble. He misses a knee drop and can’t recover in time so Williams uses this time to get an Abdominal Stretch. Paul gets out and lands the ten punches in the corner but Steve low-blows him right in front of the ref. No DQ though. Williams locks in a bearhug, forgetting Paul’s leg. Orndorff escapes with a Mongolian Chop and kicks Williams in the dick out of revenge. Paul brawls with Williams outside and uses a cable to choke Williams and for the third consecutive week we get a Double Count Out.

Winner: No One Yet Again (Really solid stuff from both Battletoads-level brawny bastards. Nothing amazing but it was world’s away from everything else on this episode.)

Overall: Come for the 1990s racism and stay for the…1990s racism, I guess. That’s the end of the first set of tapings, I’m sure the fair folks at Observer will be objective for the next set. If not, expect to see Ryan Alvarez getting attacked with a “rag” on a “stick.”