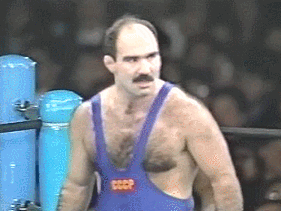 VICTOR ZANGIEV vs. YOJI ANJO:
-Anjo, in tiger-striped tights, goes for knees, but has to escape an arm thing. He throws a HUGE high-kick and Zangiev ducks & tries a bow & arrow hold (yes, this promotion pretended to be real), but the kid’s in the ropes. He Severns Anjo into a German and he’s stunned in the ropes for a bit, but avoids an enzuigiri and tries arm stuff, then Figure-Fours the arm between his legs and bends it upwards, leaning on Zangiev for the tap-out (2:40 of 5:50 shown).

Rating: *1/2 (the pretend fighting honestly isn’t that bad in these small doses)

VICTOR ZANGIEV vs. YUKO MIYATO:
-Miyata’s in black. Zangiev holds him in a backdrop and airplane spins him, but he’s in the ropes. The kid (WAY smaller than Victor, here) throws some VERY Hollywood-style kicks, including a Sean Watman spinkick, then outwrestles him after getting his leg caught. Miyata goes for a cross-armbreaker, but Zangief literally bridges up, amateur-style, scoots to the side and FORWARD FLIPS out- in a “SHOOT” promotion- and does a judo flip, fireman’s flip, and a fucking BOW AND ARROW. In a “SHOOT” promotion. Miyata rolls out, and two takedown attempts go nowhere until Zangiev hits an awesome Deadlift German, stunning the kid. He’s up at “4”, but is easily caught in a Cross-Armbreaker for the tap-out at (4:22).

VICTOR ZANGIEV vs. NOBUHIKO TAKADA:
-Takada here is the Ace, and holy shit his purple gear is INCREDIBLE and needs to be copied. Zangiev is now bald and wearing a blue singlet, making him look way older. Takada throws some flashy kicks, but they switch around on each other until Zangiev hits a big belly-to-belly suplex into a cross-armbreaker. Takada escapes during the replay and they try leg stuff on each other, rolling around. They’re in the ropes, then do amateur-style stuff that’s easy to make look real.

Zangiev hits the ropes from a leg-hold, but takes a ton of kicks to the upper thigh, then some “pro wrestling” kicks to the head (you can see Takada loosen them up on “impact” so they don’t hit hard), so Zangiev has to take a breather on the ropes for a sec. He takes Takada down, but gets caught in a cross-armbreaker… and does the FLIP-OUT FROM BEFORE! Psychology!! This is treated like a big spot, teased as he sets it up- so great. He stuffs a kick, but can’t hit a butterfly lock and gets taken down in the heel-hook anklelock- he scrambles for the ropes, but Takada folds up the leg, then torques on a side headlock… for the win (6:32). Ah, he finally got him.

These are kind of hilarious matches to watch- like they try to be real, but UFC hadn’t happened yet so we don’t realize that you can’t get out of cross-armbreakers like that, or just take kicks flush to the head as set-up moves.

Hmmm… this column’s a bit short. Have a High Voltage match! You can find this one on YouTube!

HIGH VOLTAGE (Rage & Kaos) vs. VILLANO IV & SUPER CALO:
(WCW Worldwide, not listed on Cagematch)
* Wait, they have the Villanos split up for this one? SO WEIRD. Voltage are now in black tights with fire on them. The luchadores are in black, with Calo in his iconic silver mask with sunglasses.

The luchadores double-team Kaos to start, fucking up a double-hiptoss (he sells it anyways) and a double-dropkick gets one. Kaos breaks out of an armbar with the most awkward knee-shot, sending Rage in with an overhead belly-to-belly on Calo. Short-arm clothesline and some lazy wristlocks, but Kaos misses a shot in the corner and Villano’s in for some super-plain offense. Kaos runs in and dumps Calo, then hoists Villano IV onto his shoulders, allowing the Power Plant (Slingshot Doomsday Leg Lariat) to get the pin at (2:37). Well at least their finisher is kinda cool.