AJW TV SHOW (July 1993):
* Oh good! I found another one of these! Always fun to check out their weekly TV show (with ads! One features an AMAZING trailer for a “tiny samurai” movie where he opposes a cat and a street-sweeper. I wanna see that movie).

“TL;DR- What’s The Big Deal?”: These shows are always fun, if only for the commercials and the rare matches. It’s very interesting to see the weekly TV of a promotion most would only recognize from their biggest shows only. Okay, that’s just a nice way of saying “it’s fine and nothing stands out as overly great”, but it shows a complete package of the promotion! 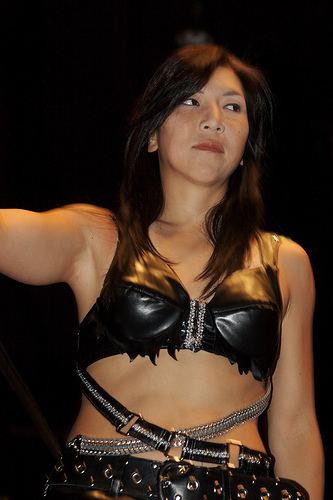 Veteran joshi Kaoru Maeda, who was apparently FIRED from AJW for breaking the “No Boyfriends” rule, messed around in Mexico and other companies for a while, then returned as Infernal KAORU.

AJA KONG & INFERNAL KAORU vs. SAKIE HASEGAWA & KAORU ITO
* Oh god the vets are going to execute these two. KAORU has returned to AJW wearing a mask and using ALL CAPS so you know she means business. She’s in black & pink while Aja, the WWWA Champ, is in purple. Ito’s in the green Peter Pan gear, while Sakie’s in the blue/purple singlet.

The kids attack first, but miss dropkicks and nearly get splashed by Aja at once. Haha, and now they’re just running around doing Ito’s stomps to Aja’s back! They’re going to die, but this is funny! Aja launches a spectacular beating in response, then tags out to KAORU for her basic stuff. Ito manages a comeback with running moves on Aja as we’ve clearly clipped out a Sakie portion (she’s selling on the apron), and they score a Double Backdrop on the champ, then do a fun combo-attack with Sakie’s Rolling Butterfly Suplexes with a pause so Ito can hit a Running Stomp each time. Vader Attack puts a stop to that offense and it’s an outside brawl, Aja using a tote full of paper as a projectile weapon (I’m having flashbacks to working at Zellers here). KAORU does her basics but gets caught with Savate Kick Spam for two!

Ito misses a flying cross-body and Aja sits on her during a sunset flip, but when she climbs, Sakie dumps her off and sets her up for a SUPER Flying Stomp Suicida! KAORU stops that attempt, though, but planchas out and hits AJA, and now the rookies do the Flying Stomps off the apron, skipping across the fallen vets like rocks on a pond! Super Flying Stomp on Aja- two! Sakie misses another kick, but ducks an Uraken backfist and gets tossed down from an Uranage attempt. KAORU spams her lame High Thesz Presses, but gets launched onto Sakie and fires off a REALLY nice German Suplex for two. Ito tries an Ass Attack but gets Germaned by Aja in mid-leap. Second-rope splash & dangerous backdrop get two each, then Ito’s caught with an Uraken after flipping out of another backdrop, and another one gets two- Sakie saves. KAORU finally deals with Sakie while Aja finishes with the Manami-Killer Chokeslam at (21:07, 10:40 shown). Aja gives some props after the match, and the crowd chants for a staggering Ito to end it.

Rating: *** (Fun TV match, with some good spots and spunky comebacks from the rookies to make you forget there’s no way on Earth Aja wasn’t scoring the fall. KAORU added very little- even the HEAT SEQUENCES were on Aja! But wow, they cut out half the bout, so who knows what was missing?)

Bat Yoshinaga- the pint-sized ass-kicker has been given a major run of late, usually of the “doing well in tag matches against elites” vein. This is actually how a lot of puro stars slowly gain credibility. Last week, she even got a fluke win over Kyoko Inoue- a megastar!

BULL NAKANO & BAT YOSHINAGA vs. TAKAKO INOUE & ETSUKO MITA:
* Interesting combination here, as Bull’s stable is together, but Takako the sadist is mixed up with the only person who likes choking bitches as much as her. Bull & Bat are in the usual- Grateful Dead & black/yellow, and Takako’s in her white & blue, with Mita in the black.

Bull & Bat attack to start, but Takako catches them both with a flying cross-body when Mita avoids a double-lariat. Takako throws Bat around, Mita drops her on the top rope, and a double-team move off the top gets two. They work out a pro-LCO pose in the ropes, but Takako gets booted down and bumps like mad for Bat. Mita thows Blazing Chops for two, then an electric chair drop and piledriver, and now it’s DOUBLE-TEAM BITING, which is a new one. They work Bat’s leg for a while with basic stuff, but when she finally escapes, Bull’s caught in the airplane spin! She absolutely floors Mita & Takako with a double-lariat, however, and now SOMEONE TOSSES IN THE NUNCHUCKS, and Mita takes the worst of that. Kneeling Powerbomb and Takako saves. Double-team sees Bat accidentally hit Bull with her spinning kick, and Takako hits a backdrop & backdrop hold for two. But that’s all, folks- Bat ducks a double-lariat and spinkicks Takako twice, Bull suplexes both opponents at once, then finishes Takako with the Guillotine Legdrop at (11:07, 7:51 shown).

Quickie match here, even only barely abridged, and it was mostly Takako & Mita working over Bat, which is an odd choice (Mita usually sells in these bouts- are they finally figuring out her strengths?). The editing made it come off like Bull just did a couple runs and won the whole thing herself, too.

Rating: **1/2 (fine TV match- didn’t overstay its welcome, but nobody was showing off, either)

haha, now an add for “The Crying Game”. Aka one of those movies where everyone alive knows the big twist through pop culture osmosis. There’s also the Japanese version of “Cabaret”, plus some commercial about costumed singers doing a ballad for old people.

Minami & Yamada start, and their sequence is as great as you’d expect- these two have the most well-applied offense on AJW. Minami takes the worst of that, but manages her tilt-a-whirl backbreakers on her former partner Hotta, then a butterfly suplex and an abdominal stretch while hooking the leg so dramatically I can hear Gorilla Monsoon marking out from the grave. Fun sequence as Hokuto tags in, they miss stereo dropkicks and get cross-bodied by a flying Yamada, but then the Kick Demons miss stereo kicks on Minami and Hokuto flies in on THEM, knocking them back with a split-legged missile kick. Yamada is POURING sweat, so this is clearly clipped and not really 4:00 in.

Hokuto bulldogs Yamada out of the Finisher That Never Hits, but she manages a spinkick, and follows with Enzuigiri Spam! Flying elbow smash gets two. Akira scores a double-facecrusher to come back, and the Wolves nail Stereo Powerbombs for two! Minami hits some leisurely missile kicks on Hotta, but Akira gets caught with a Tiger Driver for two. Hokuto knocks Yamada off the apron, but is yanked off the top- Minami boots Hotta out and now it’s a dive from Minami and the Somersault Plancha from Hokuto! Double Missile Dropkick gets a CLOSE two on Hotta in the ring, and a frustrated Hokuto death-spikes her with the Northern Lights Bomb at (16:21; 7:18 shown). Yeah, see? You put all your XP into “Finisher” (both ease of application and damage) and you can end matches in a flash without even doing a full Escalating Finishers portion.

Rating: **1/2 (fun little quickie of a match despite all they cut out- good spots and great wrestling, as much as they were going 1/3 speed cuz it was just a TV taping)

The announcers take us home with the full match times, and stuff that didn’t make TV. Saemi Numata pins Masami Watanabe (ASARI) at (8:42) with a Backdrop Suplex, Mima Shimoda pulls back Tomoko Watanabe from a whip and Tiger Suplexes her at (13:46), and Manami Toyota & Kyoko Inoue go to a Time Over (!! -We missed THAT?!).

Overall, another quick little show, but this one kind of showed the stitching together from bigger matches- they were VERY abridged and clearly missing huge bits, as much as their clipping was very secretive, as usual. People clearly had the hell beaten out of them and we didn’t see it, making match ratings hard to do.