Dreamer & Delaney somehow won a non-title match last week against the champs via Dreamer using Delaney like the Flintstones use birds so they get a shot tonight. The Champs try to isolate Dreamer with double-teams but he powers out and hurls Delaney off the top rope onto Miz. Miz returns the favour by killing Delaney.

Tazz says Delaney may be the toughest guy in WWE despite his size then pauses to remember when people used to say that about him. Morrison & Miz start double-teaming Colin but he’s able to tag out rather easily. Dreamer cleans house and attempts the E-pant-C-gasp-W Tree of Woe but gets interrupted by Miz so he turns it into the rope-elevated neckbreaker he used to do regularly in ECW. Morrison and Miz cut off the ring and stomp Dreamer but Miz makes the mistake of knocking Delaney off the apron which causes him to lose his temper and he runs in with a chair to smack the champs daft.

Winners and still Tag Champs via DQ: John Morrison & The Miz (Another match where the ongoing story is more important than the quality, even though Dreamer is suddenly Deathstroke The Terminator with the moves he was throwing out there. Delaney continues to grow up in front of us, can’t wait for the episode where Delaney borrows his car without asking so he can impress some hot babes.)

This match could go either way, both are on the verge of crashing through the sugar-glass ceiling of ECW on Sci-Fi. Quick back suplex gets two for Stevie so Shelton begs off, but grabs Stevie as he tries an up-and-over and turns it into a slam. Shelton singles out Stevie’s shoulder for a few minutes to kill the already-silent crowd. Eventually Shelton misses a crossbody off the top (with Shelton jumping to the top rope in one vault) and Stevie gets two from a side slam and enziguri. Shelton counters an Irish Whip into the Paydirt for the abrupt pin.

Winner: Shelton Benjamin (Shelton’s spots are over but he isn’t. He had no way of turning his athletic freakiness into something the crowd could get behind so no wonder he’s always in tag teams. At least Shelton has the vertical leap, I think this was the end of the brief Stevie push.)

Post-match Shelton enters himself into Money In The Bank ladder match at Wrestlemania, which was the only thing keeping him employed by WWE.

James Jobber With Name Graphic Curtis gets yet another TV appearance but never mind that, Chuck Palumbo shows up to ride his hog around the ring to distract Kane. Doesn’t work, Curtis falls to the chokeslam and Kane dramatically stares at Chuck as he rides away.

Winner: Kane (An advert for the upcoming Chuck vs. Kane match on Smackdown that I’m devastated I don’t get to recap.)

Here’s Chuck looking bad-ass and American on his hog.

And here he is with the lowest rating in WWE Raw vs. Smackdown. 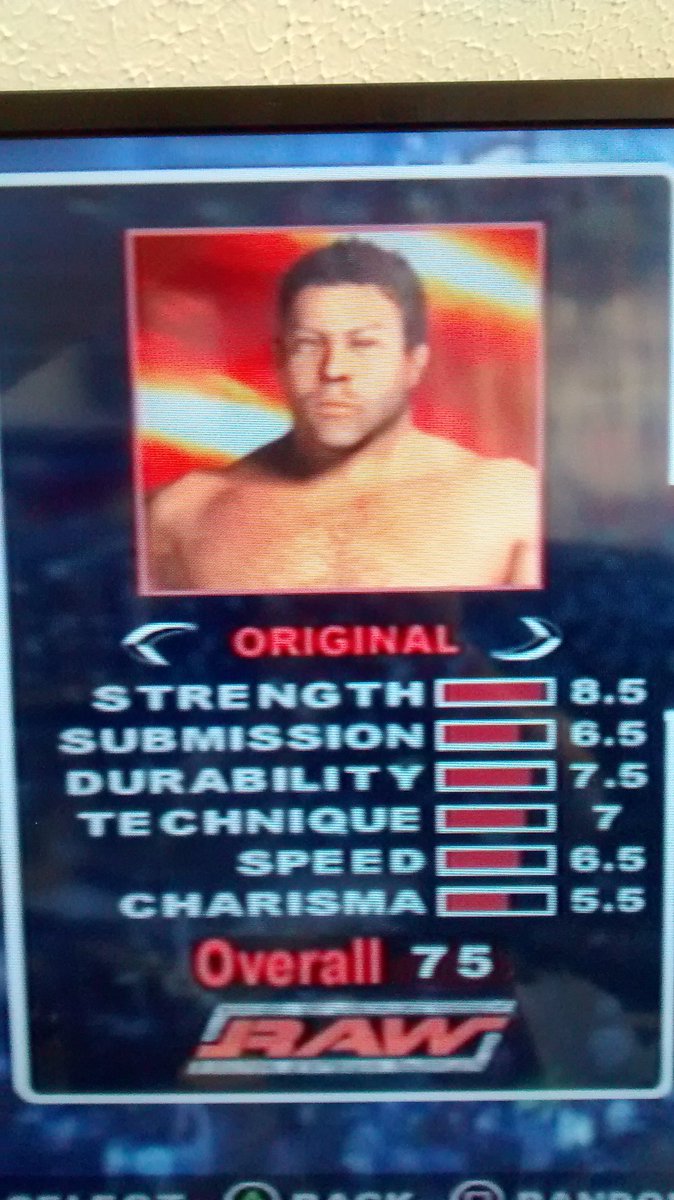 RAW REBOUND: Big Show destroys so-cal jobber Brandon Hill in a MMA exhibition with a chokeslam. Commentators kept on saying ”he’s the same size as Floyd Mayweather!” to let you know it was a Wrestlemania preview I was surprised they didn’t blurt out ”he’s black like him too!”

Lena Yada (who has quietly gone from wrestler to backstage interviewer, if anyone cares) interviews CM Punk who reminds Chavo he’s not Eddie, the surname Guerrero used to make WARRIOR but now it means COWARD. I think Frank Sinatra Jr. didn’t have it as bad as Chavo. And wait, Chavo beat him clean at No Way Out! How’s he a coward?

Crowd chants ”Chavo Sucks” to begin as Punk dominates with his skinny fat ass kicks. Chavo tries to grapple but Punk out-wrangles and slams him with a tilt-a-whirl. Chavo comes back with a thrilling headlock but Punk goes back to kicking him immediately afterwards. Chavo gets back on offence for five seconds and the crowd boos the hell out of him. He got one uppercut and the fans went nuts! Chavo loves the hate so he decides to try and kill Punk.

Back from break (adverts and Punk’s arm) and Chavo is working over Punk’s ankle. Punk tries to stand up so Chavo gets a chop-block and wraps him around the ring post. This defrosts the crowd to chanting for Punk who recovers with an enziguri. Even though Punk has a bad ankle he decides to follow with a tope and lands ugly.

That’s Seth Rollins’ entire WWE run in one GIF. Back inside, Punk nails the springboard clothesline because selling is for drunks. Punk attempts an armbar but Chavo rolls to the ropes and where is this match going? It’s just time-killing moves, even if the crowd is making noise. They slug it out with Punk getting the Running Knee/Bulldog combo for two. Chavo rolls into a Single Crab like Lance Storm but Punk quickly gets the ropes. Punk attempts the GTS but his leg gives out (yay!) so Chavo tries Three Amigos but gets stopped at third suplex (Steve Martin) and turned into a small package for two. OK now the match has picked up for the better. Chavo goes up top but Punk tries to block him, but Chavo crotches him on the ropes and finishes with the Frog Splash.

Winner and still ECW Champion: Chavo Guerrero (A meandering display of moves for the sake of moves with some no-selling thrown in for good measure (even if the last few minutes were good). Chavo has gone from being a cowardly puss to a comedy eejit to a serious threat in a matter of weeks and I’m zoning out from the change in direction/writers not caring. There’s a reason the mariachi and Gulf of Mexico stuff is remembered and nothing else is. Also Punk had a habit of turning back into Super Cool Indie Dude during his matches so we get stuff like Punk doing a dive after Chavo working his leg for five minutes. I probably would have enjoyed that in 2008 but in 2018 I’m cranky and hate it.)

Overall: IT’S WRESTLEMANIA SEASON everywhere but here. Shelton entered himself into MITB, Chavo is still champ and Kane takes on the Stars In Their Eyes version of his brother on Smackdown. But it’s not all negative, there was no Elijah Burke this week.

I’ve been Maffew and I work for Cultaholic now but never mind that, good guy indie guy BLASTER MCMASSIVE was on NXT last night!