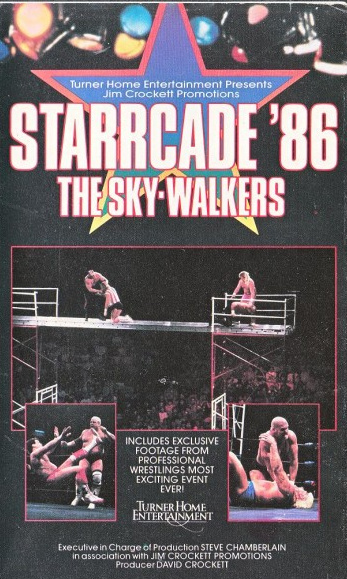 This reflection is dedicated to the illustrious but shortened career of Magnum T.A.

In Greensboro, ring announcer Tom Miller welcomes us to the show, and the national anthem follows. He then introduces Tony and Rick in Atlanta. For those unaware, Rick Stewart was the play-by-play announcer for the recently-acquired Central States territory. He should add some flavor to the Central States-themed matches on the card.

Bob and Johnny join us from Greensboro to hype the show.

Summary: Lots of scientific mat wrestling that modern fans might not enjoy.

After the match, Precious comes into the ring to cast her spell upon distract Armstrong. It doesn’t work as Armstrong blocks a right by Jimmy then nails him. Precious restrains Jimmy who yells “I can beat him. You’re (Armstrong) lucky.”

Summary: Greensboro loved Whatley getting beaten up. In addition, Guerrero did a great job of selling here.

After the match, Barbarian tosses Guerrero over the top rope to the concrete floor. He and Whatley then deliver a double clothesline to von Raschke. After another mafia kick, Barbarian mounts the top turnbuckle and hits the diving head butt. Guerrero returns and clears the heels from the ring.

Backstage, Weaver stands outside Rhodes’ dressing room. He knocks on the door, but Rhodes wants his privacy. Perhaps Cody is saying his first word: “screwjob.”

Match 4 for the NWA US tag team titles (no-DQ): Ivan Koloff & Krusher Khruschev versus the Kansas Jayhawks (w/o Roy Williams)

Summary: Yuck! If newer fans are seeking a good match to welcome Rude to Jim Crockett Promotions, this match isn’t it. Neither blade job was very traceable as well.

After the match, Rude pummels McDaniel as Jones knocks down referee Sonny Fargo. Fortunately for McDaniel, Guerrero and von Raschke come to his aid.

Summary: The wily veteran did an acceptable job of carrying the young Houston here.

After the match, Dundee continues to nail Houston with the boot.

Summary: Hopefully this FINALLY puts an end to the elongated feud between Jones and Valiant. During this feud, Valiant lost his hair, Whatley lost his hair, and now Jones will lose his hair.

After the match, Valiant shaves Jones bald as the crowd chants “bald-headed geek.” Hebner unlocks the cage, and Fernandez bolts to the ring to attack Valiant. A bandaged Rude joins his tag team partner and lifts Valiant. Fernandez mounts the second turnbuckle and gives Valiant a back elbow. Next, Fernandez retrieves a chair and assists Rude with a spike DDT onto the chair. ECW! ECW! ECW! Jones wakes up and realizes he’s bald. To protect their manager, Rude and Fernandez cover his head and take him backstage. Afterwards, McDaniel and von Raschke slowly assist the fallen Valiant out of the ring.

Tony shills the second annual Bunkhouse Stampede coming next month. We then switch to Bob Taylor in the Starrcade Control Center who provides the details. Following that, we see a vignette where Nelson Royal sits by a campfire and relates his experiences in bunkhouse stampedes. For those unaware, it’s a battle royal with weapons. Thereafter, we revisit last year’s event where Rhodes won after eliminating Barbarian.

After the intermission, Tony shills the second annual Jim Crockett Sr. Memorial Cup tag team tournament. He throws it back to Taylor who describes what took place last year in New Orleans. As he mentions the Sheepherders, he mistakenly referred them as Australian. If anyone from down under is reading this, do New Zealanders take offense to being called Australian?

Summary: Rogers owed Cornette a big meal for helping him to win this match. Without Cornette, Rogers stood no chance. Better things were on the immediate horizon for Ron.

Summary: The WWF would swipe this finish for King of the Ring 1998 costing Stone Cold Steve Austin the World title.

After the match, an enraged Rhodes tries to point out that Blanchard was bleeding before he was. He then shoves Hebner who exits the ring without haste.

Summary: As a wrestling match, this was nothing. However, as a spectacle, it was awesome. I truly hope they keep these scaffold matches to a minimum as the ability to protect oneself is quite limited.

After the match, Ellering snags Cornette’s racquet from him. Cornette then scurries up the scaffold. On the DVD I mentioned earlier, Cornette let us know that he’s acrophobic, so he’s definitely going against the grain here. Ellering climbs up right behind him. As Cornette makes it to the top, Animal is waiting for him. Having been cornered, Cornette crawls down to the undercarriage, hangs there for a bit, and falls down to the mat.

Rogers, who was in the ring, was supposed to catch Cornette, but, due to wearing sunglasses in a dark arena, misjudged where Cornette was and missed him. As a result of the fall, Cornette suffered a severe knee injury. Instant karma got him after all.

Tony shills the upcoming Great American Bash tour coming in the summer of 1987. From the Starrcade control center, Bob Taylor describes the tour as fourteen nights throughout the country to celebrate Independence Day. That’s a LONG time to party.

Scenes from last year’s Bash are shown. The first scene from Philadelphia (7/1) shows Baby Doll, who teamed with the Rock’n’Roll Express, finally getting her hands on Cornette who ultimately receives a double dropkick. Next, the Road Warriors and Magnum T.A. defeat the Soviets in a steel cage at RFK Stadium in Washington, DC (7/3). Following that, we see Wahoo McDaniel defeat Jimmy Garvin in an Indian strap match in Charleston, WV (7/10). Finally, in a hair versus hair match, Jimmy Valiant defeats Shaska Whatley in Charlotte, NC (7/5). Even country recording artist David Allen Coe is featured. Also at the Bash, we see the ending to the steel cage match where Dusty Rhodes captured the NWA World title from Ric Flair in Greensboro, NC (7/26).

After another intermission, Tony gives credit to those who helped to bring Starrcade ’86 to life. The credits roll. Obviously, this was done to secure more time to set up the steel cage.

Summary: Awesome tag team match where both teams’ style was fluid. The match was dictated perfectly by the Andersons while the RnR Express sold extremely well.

After the match, Ole sends Morton into the cage yet again as the Express have to crawl to escape the frustrated Horsemen.

Summary: Although appropriate, his match epitomized the definition of backup plan. Since Flair had regained the title three months prior to this show, it made sense to keep the belt where it belonged.

After the match, officials (including a shirtless Mulkey brother) come out to assist McGowan but get plowed over by Russian sickles from Nikita. Dundee, Rogers, and Jimmy Garvin run in and hold Nikita for Flair to strike. After all, the heels are PISSED he joined the DARK SIDE. Wrestlers from the babyface dressing room run in to even the odds and separate the combatants. Flair and Nikita keep going after one another, so you know this feud will continue.

Conclusion: It wouldn’t be fair for me to compare this show to Starrcade ’85; therefore, by itself, it’s a good show. Please keep in mind that these twelve matches took almost FOUR HOURS. If you’ve never seen this show, the last three matches are worth your time.

Why do I say that? In spite of the fact that I gave the scaffold match a low rating, It’s worthwhile because it had never been done before and was an experiment that taught everyone involved how dangerous it truly was. The World tag title match was awesome, so there aren’t any questions there. Finally, the main event was Flair’s magic with the latest contender that worked well here. Grab your favorite device, tune into the WWE Network, and enjoy the show.

Comments? Suggestions? Send them to me at [email protected] and follow me on Twitter (@rockstargary202). And be sure to check out all of my reflections at rockstargary.com.