The one with Tenryu getting his revenge on Haku!

The one with Macho Man headlining the Korakuen Hall! 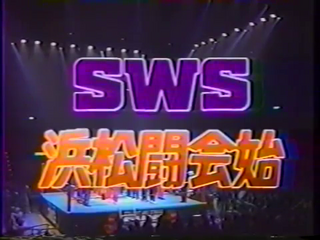 Prologue To The Prologue

In 2020 I was faced with the triple threat of lockdown, COVID and WWE’s Thunderdome so I decided I needed to sink my teeth into a big sanity-sandwich and started looking at the history of the fascinatingly big little Japanese wrestling company Super World Sports. These were going to lead to a series of articles for WrestleJoy because at the time I needed some positivity in my life and I wanted to think a company with JOY in it’s title would be a good way to get it. Sadly, I got two articles in before the owners of the site completely derailed their reputation by supporting former AEW Shenna wrestler’s tweets declaring all Muslims should be banned from France. This caused several of their writers to immediately quit and made the owner of the site have a boo-hoo-why-me-why-me meltdown on twitter rather than apologise or admit fault like a normal person. Once I realised their brand was simply a graft to get AEW press passes, I left them to wallow in their self-made pool of misery and stayed positive by playing hours of Hades instead.

The Blog Of Doom is generally more genuine (at least whenever Scott’s not posting the e-mails he gets) so I might as well carry it on over here so Manjiimortal can correct me on the parts I’ve copy-pasted from the Observer Archive.